Completed July 2012..... Three Heads are Better Than One (height:  five feet; constructed of chrome, aluminum and steel; finished with acrylic and automotive paint), on view at the Rodrigue Gallery, New Orleans; click photo to enlarge- 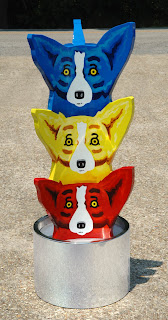 It was probably ten years ago that George Rodrigue started work in earnest on the concept of a Blue Dog sculpture. He dabbled as early as 1992, but those pieces were flat cut-outs made of wood, usually mahogany, about two inches thick, and painted as if they were on canvas. Occasionally he surrounded these pieces with neon or added other elements to the shape, such as a moon or hot dog. He also tried a few on poles, without a front and back, but rather with two fronts -- one side blue and the other side red. 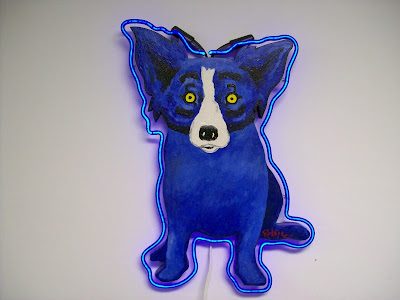 From the beginning there was a real challenge in creating the dog as a sculpture, because for George the Blue Dog only exists in two dimensions. It’s not like a dog at all. It doesn’t run or bark or chase its tail. It doesn’t have a backside. It only exists in a specific pose and on a flat plain within a Rodrigue painting.

These early sculptures were fun; however, other than their wooden structure, they were no different than had he cut the image from a painting with scissors, attaching it to the wall sans background.  The idea of a three-dimensional sculpture haunted George, but an effective design eluded him. In addition to wood, he experimented with bronze and plaster, but still the results were cut-out shapes that hung like canvases.

Rodrigue was in search of a sculpture that would stand on its own while retaining the strong, well-defined Blue Dog shape.

By the late 1990s, the idea of a Blue Dog sculpture became almost a daily part of George’s creative process. He played with paper and cardboard, bending and pasting and cropping, with occasional add-ons such as toothpicks and mini-easels, in hopes of creating a model that was more than just a shape cut from a painting. 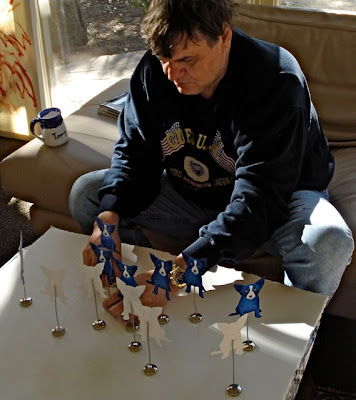 And then one night in 2003, as we sat talking at a restaurant bar while waiting for our table, George played absentmindedly with the cocktail napkins.  He stopped suddenly, looked up with a huge grin, and said,

And that was how three cocktail napkins, each balanced on one edge and held together in concave arches between our pinching fingers, became the design for the Blue Dog Sculpture. Each side would be a dog-front, with the feet matching up at the bottom.

George went on to explain over dinner that the three-sided piece will be two hundred and fifty feet tall, hold a Louisiana Welcome Center and Historical Museum at its base, and sit on a grassy area at the foot of the Luling Bridge, just outside of New Orleans.

The following week he visited Begneaud’s Manufacturing in Lafayette, Louisiana and began work on a four-foot prototype constructed of chrome, aluminum, and steel. There were many challenges during this trial run --- most importantly, how to bend the metal, avoid problems with wind (for the big one, that is), theft (for the small one, that is), and birds (it’s an attractive perch at any size) and how best to apply the color. In the end he mounted the piece on a heavy stand and pole, elevating it three feet off the ground, completing the job at an automotive paint shop where he sealed it like a car.

Within a month of his ‘eureka’ with the cocktail napkins, George finished a four-foot version and saw endless possibilities for integrating the piece as public art. 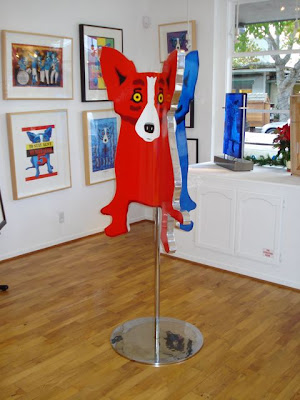 Within six months he created an eight-foot version, also red, yellow, and blue, now installed at the Sculpture Garden at the New Orleans Museum of Art (given by George in memory of my mother, Mignon Wolfe, who loved to walk there).

Following the unavoidable and lengthy disruption of Hurricane Katrina in 2005 (and the way it made us all forget anything we’d been working on ‘before the storm’), he built another eight-foot piece (2007) which he covered in automotive flip-flop paint, so that the sculpture changes color as a person moves around it and the daylight shifts (currently on view at the Sheraton New Orleans Hotel on Canal Street.) 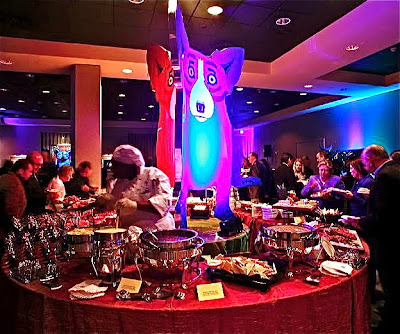 Today he works on his most exciting version yet: a 28-foot sculpture to be installed January 2010 on Veterans Boulevard in Metairie, Louisiana (a suburb of New Orleans). This large scale prompted new challenges, including working with and curving enormous sheets of metal, transporting the work from the fabrication shop more than one hundred miles, arranging landscaping, security, lighting, and parking, planning for hurricane force winds, and most importantly, working with area legislators and citizens to ensure a sculpture and installation that adds in a positive way to their community. 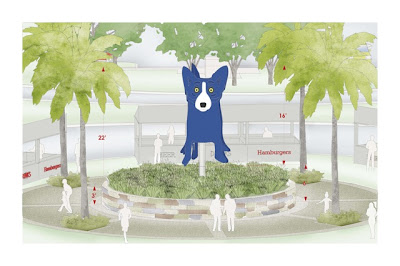 Nearly a year in the making, this impressive piece is almost finished. The landscaping is underway, and the pole will be installed this Wednesday. Last week it received its automotive flat colors of red, blue, and yellow, and in early October Rodrigue will paint the details, as the sculpture, suspended and lying on its side, turns on the giant rotisserie he designed for this purpose. 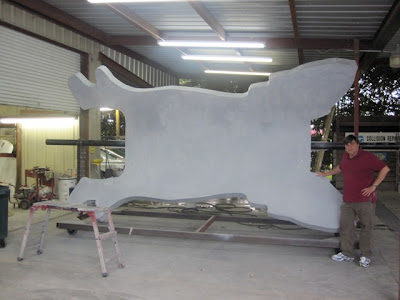 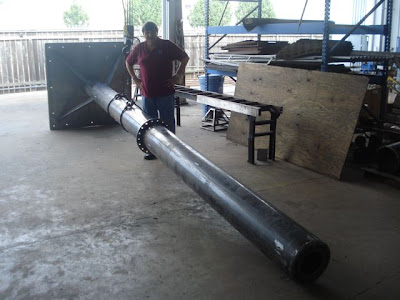 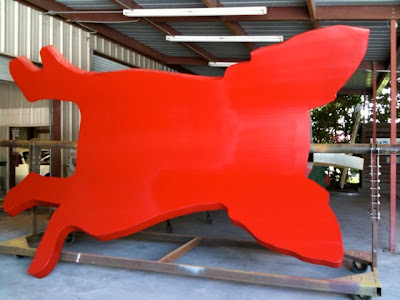 In usual George Rodrigue form, these current projects are just the beginning. In the past month, he designed a table for the new gallery space (base plans pictured below), and he’s playing with a three-dimensional wall piece by dissecting a giant sculpture. 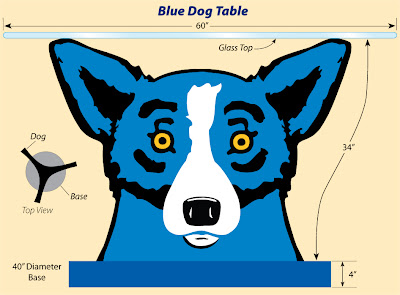 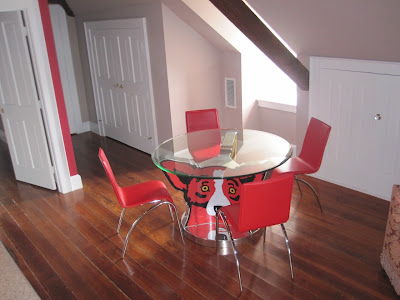 And what of the two hundred and fifty foot gateway Blue Dog?  Oh he’s still talking about it. Nothing would surprise me.

*For more on George Rodrigue's sculptures, including his early works in bronze, visit the post Bronzes-


*For more art and discussion, please join me on facebook- 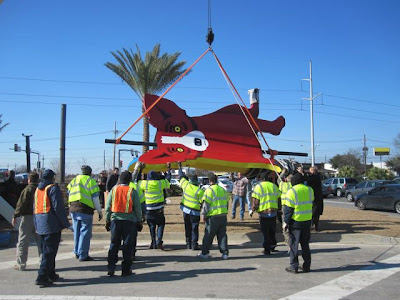 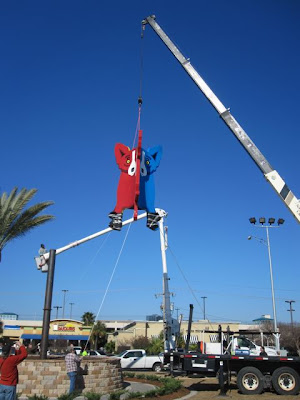 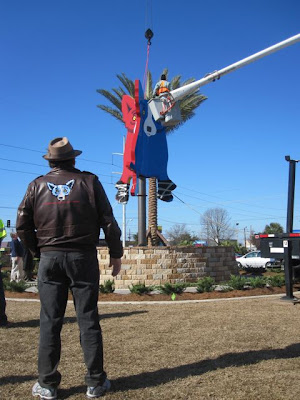 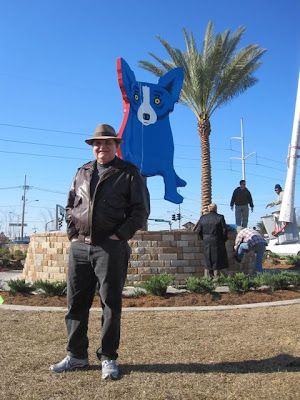 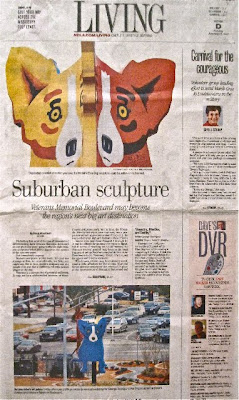