A Brief History of the New Rodrigue Gallery

As you may have heard, we are moving the New Orleans gallery in the spring. After twenty years renting in the same location at 721 Royal, we’ve purchased a building just across the street at 730 Royal, adjacent to St. Louis Cathedral and over-looking St. Anthony’s Gardens.

The French Quarter is full of rich history, and this property is no exception. Built by the Catholic Church in the 1830s, its bottom floor has been a retail space and its upper three floors apartments from the beginning.

Half of our new gallery space was for many years the Bottom of the Cup Tea Room (now located at 327 Chartres). Established in 1929, this legendary institution employed (and still does) some of the city’s most famous psychics. Surely they left behind some mysterious and elevated energy resonating between the old brick walls.

The building is also a stop on the nightly New Orleans ghost tours. Some 150 years ago a young woman named Julie, mistress to an Uptown businessman, wanted desperately to marry her lover. Tired of her pleading, he challenged her to stand naked overnight on the roof of the French Quarter apartment building where he supported her. Never thinking she would accept this bizarre proposal (made during the revelry of a ball), he was surprised to find her the following cold winter’s day on the roof --- naked, frozen to death, and still clinging to the chimney. It is said that one can see her ghost even now wandering the roof and hear her sadness as she cries for her lover.

But the story gets stranger still--- 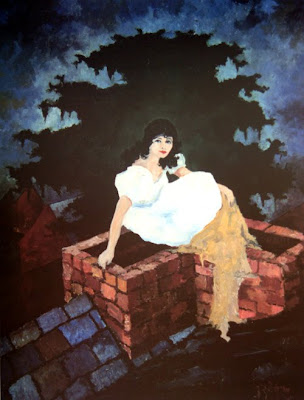 Created in the mid 1980’s A Night Alone is George Rodrigue’s rendering of this famous ghost story, and for many locals this painting has come to represent Julie’s image (in the same way that Rodrigue ‘invented’ the image of Jolie Blonde). Now his gallery will be housed in this same building --- the setting for the only painting Rodrigue ever created of the French Quarter.

Just as interesting, although not quite as mysterious, is the story of Larry Borenstein, an immigrant from the Ukraine who lived for nearly thirty years at 730 Royal, beginning in the early 1950s. He had a small art gallery downstairs, but his main gallery was at 726 St. Peter’s Street, adjacent to Pat O’Brien’s. A lover of jazz, Borenstein invited musicians to play in his gallery in the evenings, a tradition that lasted more than ten years. Those sessions became so popular that they eventually overtook ‘Mr. Larry’s Art Gallery,’ and became instead the legendary ‘Preservation Hall,’ which it remains today.

Borenstein was a controversial figure in New Orleans. He was beloved by the musicians and raised money for them by passing-the-hat each evening, while at the same time was accused by some of not paying the artists whose work hung in his gallery. (Although he is credited with discovering Sister Gertrude Morgan, the New Orleans folk artist, musician, and self-proclaimed preacher who was the subject of a major retrospective several years ago at both the New Orleans Museum of Art and the American Folk Art Museum in New York. It is said that when she was to be evicted from her By-water home, Borenstein purchased the property and allowed her to live there free the rest of her life). Furthermore, he was one of the largest property owners in the French Quarter, yet he neglected his properties, even as they decayed around him. One musician wrote after visiting Borenstein’s home at 730 Royal:

“His house behind the Cathedral is really a study in strangeness. It’s a beautiful house, a valuable piece of property. I went over to visit Larry. Larry wasn’t there. It was boiling hot. In the room I was in, there were two chairs and a kingsized bed with no bedclothes on it, and a light bulb hanging from the ceiling. Windows all closed, stuffy as anything. I’m sitting close to Sascha, Larry’s daughter, having a conversation, and it struck me that this would be a great scene in a movie. Paint was falling off of everything.” From the 1999 book Preservation Hall: Music from the Heart by William Carter.

From that description, you should not be surprised by our latest construction photos below. I’ll keep you updated as I learn more about this wonderful space and as both the property and Rodrigue begin a new chapter in their respective histories. 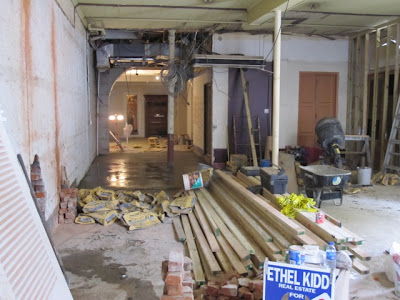 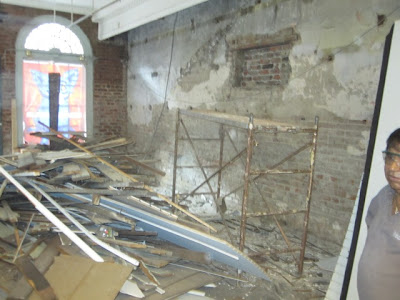 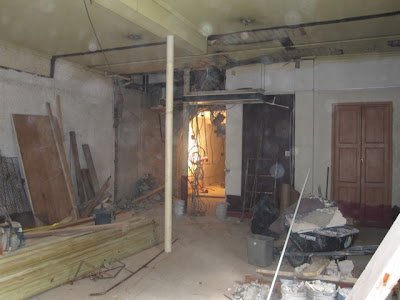 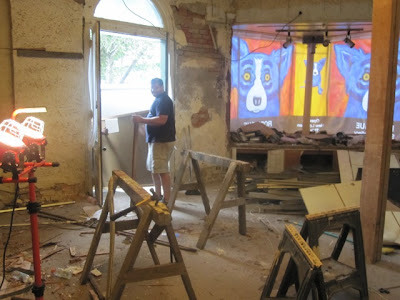 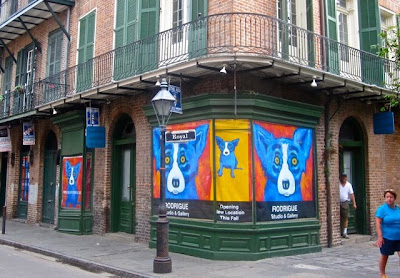 Posted by Wendy Rodrigue Magnus at 10:43 AM