We’ve spent the past three days in Memphis, extended longer than our usual book tour duty because we visited at length with patients and staff at Le Bonheur Hospital. We took a hard hat tour of their new facility, in addition to what I can only describe as an inspirational (and heartbreaking) tour of their current facility, as well as a special afternoon of art therapy with patients of all ages.

The new hospital is impressive to say the least, and they walked us through with hopes of securing some Rodrigue artwork for their public spaces. George would love to be a part of this hospital --- a place that accepts all children as patients, regardless of their family’s ability to pay --- and so we are hoping to get the details worked out and have some Blue Dogs (probably some huge reflective works on chrome) installed for their opening in June 2010. We met their physicians, their nurses, their cleaning staff, and administrators, plus the new building’s art committee and foundation leaders and many more. From everyone we understood not only their devotion to their work, but also a compassion for the children in their care. We would be proud to be part of such a group….

….which is why George spent the afternoon with a group of patients in art therapy, drawing and painting and reading stories and cutting up. If you haven’t visited a children’s hospital lately, do so. It emits a vibration, a feeling of panic, of desperation, of love, of an absolutely clear sense of priorities, of focus, of every raw emotion possible from staff and families and patients. It’s a sad and yet beautiful place, and George and I, without children of our own (his boys are grown now), feel an attachment to these children’s hospitals. We see how his work excites and inspires children. 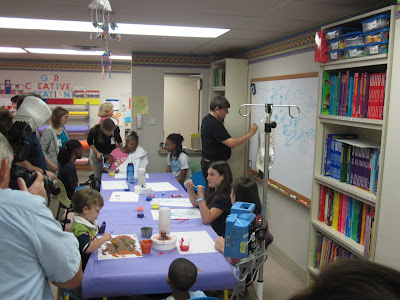 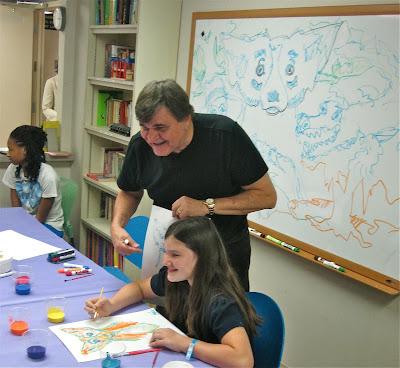 But for George, the connection goes deeper. Le Bonheur was founded in the early 1950s by a group of Memphis ladies who were desperate to combat the polio outbreak. And in 1953 George Rodrigue was diagnosed with polio. He was bed-ridden for three months, unable to walk. He was contagious, so he couldn’t play with his friends. His family didn’t own a TV set. And he was an only child, bored and scared at nine years old. It was during this time that his mother bought him a paint-by-number set to help pass the time.

George had never painted before, but he knew what to do right away. He turned the numbered canvas over and painted on the backside. He painted fire trucks and alligators and guns and monsters and all of the things that he loved and found interesting as a young kid in New Iberia, Louisiana (he paints in the same way today), and he made up his mind that he would be an artist (no different than if he’d said, “I’m going to be President of the United States,” as far as his parents were concerned). For more on George's early years, see the post "How Baby George Became an Artist."

Today he tells this story in children’s hospitals, such as the one we visited this week in Memphis. George relates to the children. He remembers being terrified as a child when he saw rows of kids in iron lungs, thinking he was next. He remembers it like it was yesterday, and he believes in a more positive, nurturing, even inspiring and educational environment for these hospitals, so that it’s not the trauma the kids remember, but rather something positive --- the people they met there, or perhaps the projects they created, the music they heard, or maybe even the time they saw their reflection in the chrome Blue Dog hanging on the wall.

In addition to the hospital, George presented his ideas for an hour to an art class of one hundred fourth graders at Memphis’s Presbyterian Day School. They are recreating his painting The Millennium (which makes George the only artist to actually visit, since their previous projects were The Mona Lisa, Starry Starry Night, and American Gothic). Once again, as with the NOMA tours, I was reminded of young children and their ability to see and ask great questions. Their overriding curiosity was in how George processes his thoughts. One child asked, “But explain to me how you figured that out?” And another, “But how did you think of doing it that way?” And yet another, “How did you know that was a good idea?” 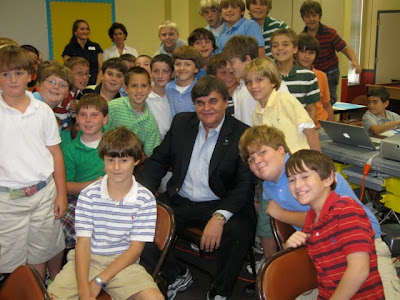 George had a great time, and I believe the children did as well. I can testify that they were mesmerized, and if their teacher Darla allows, I’ll post their finished Rodrigue here, as soon as it’s ready.

As if the hospital and the school were not enough, we couldn’t visit Memphis without another book signing at one of our favorite independent bookstores, Davis-Kidd. We followed that with a tour of the Belz collection of Chinese and Judaic Art, which I can’t recommend highly enough, if for no other reason than to see the Chinese Blue Dog! 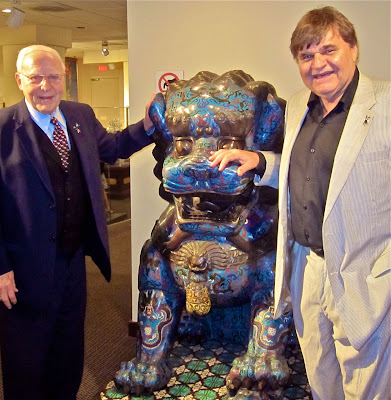 We wound down our experience with “A Little Less Conversation” at Graceland, where I choked once again (first time, eight years ago) over the plastic flowers at Elvis’s grave, and the fact that the fence was so close that anyone hanging over it with a popsicle would drip right on that sacred ground. (Oh if they would only let me in there to plant some rose bushes). 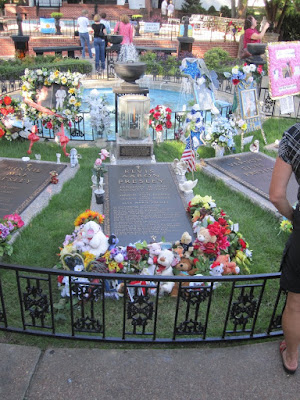 It will be no surprise to our closest friends that, once again, George and I are in our element visiting America. Just when we think it’s the West we crave, we fall in love all over again with the deep South. (Although I’d be lying if I said I can’t wait to see New York again in a few weeks). And if you’re one of those people who just doesn’t like the South or bar-b-que or Elvis, well .... what's the matter with you, Honey? 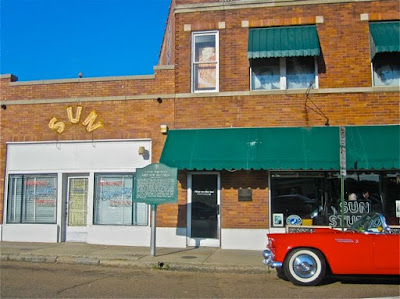