To be honest, we wondered if anyone would show up at the tiny independent children’s bookstore Hicklebees in the community of Willow Glen in San Jose, California. We’d never visited the store before, and it had been years since we’d had a book event on the West Coast. So imagine our surprise when we walked into a full house, complete with a few family dogs and Blue Dog tattoos and long time Carmel gallery clients and a few Louisiana natives (thankfully able to update George with the LSU score) and a ‘Rodrigue’ descended from George’s same Portugese ancestry, and husbands who dragged wives and children who dragged parents and an endless supply of smiling, attentive faces.

And what a bookstore! It’s a real endangered phenomena--- the sort of “You’ve Got Mail” neighborhood charm where they ‘make the books come alive’ and serve homemade cookies. Their walls and upper shelves are cluttered with treasures donated by visiting authors, and the Smithsonian curators must dream about something as special as Hicklebees’ stockroom and bathroom doors, covered in drawings and signatures from famous authors, including a special rendition from J.K. Rowling herself, who signed at the store so long ago that, according to the owner, they had to “beg ten people to show up.” (Harry Potter illustrator, Mary GrandPre', also visited the store several years later and added her Harry and Dumbledore to a door). 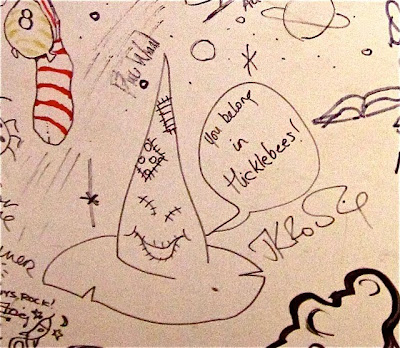 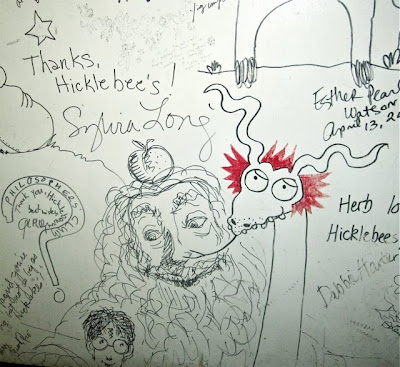 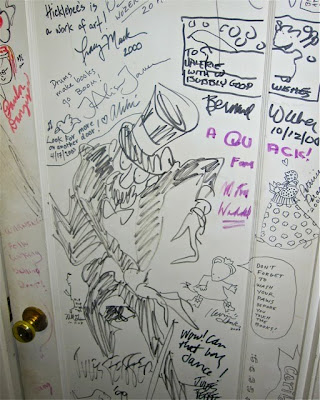 George visited with the crowd (and drew on the bathroom wall), and a group of wonderful young helpers joined me in reading Why is Blue Dog Blue? and Are You Blue Dog’s Friend? We could not have hoped for a better way to launch this fall’s tour. 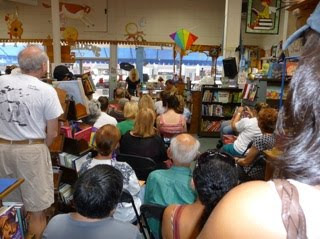 As if that (and the winning Tigers and the great margaritas at the local cantina) wasn’t enough, we had en evening last night that, although unrelated to painting and the Blue Dog, was one in a million and is worth sharing here.

We visited Mountain Winery and enjoyed a concert by the last of the great crooners, Tony Bennett. And boy is he GREAT.

Although we had never met Mr. Bennett before, we have a mutual friend, Joe Segreto (pictured with me below on Mardi Gras Day), who has the Italian restaurant Eleven 79 in New Orleans. 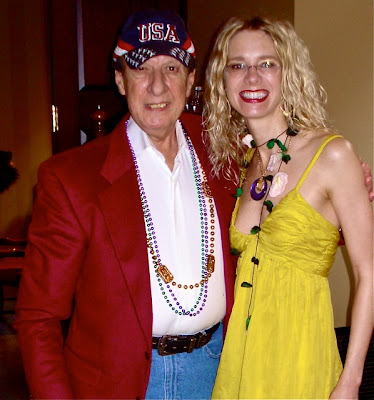 Frequented mostly by locals, Eleven 79 gets its name from its address, 1179 Annunciation, and is located just under the on-ramp to the Mississippi River Bridge. On any given night, the place is full of real characters, which I guess includes us (or at least George), since we stop in often just to hear the latest stories and politics from the colorful group at the bar.

I remember one night a year or two ago, just after Louisiana banned smoking in restaurant bars, George and I pulled up to Eleven79 for dinner and saw Joe and the gang, wearing their usual dapper attire, sitting at wrought iron tables and chairs on the sidewalk. As we approached, Joe, with his usual old-world, yet devious charm, looked at me and said,

“Isn’t this great, Dahlin’? We’re turnin’ it into the Champs Elysee.”

George and I looked up at the concrete overpass and scanned the neighborhood (a mixture of warehouses, fixer-uppers, and parking lots), and as we walked into the restaurant, George shook his head, and with his usual ‘snagglepuss’ kee-hee-hee said,

“What are they gonna do, watch the crime go by?”

And sure enough, all that’s left now is one table and a few chairs, all chained together and sitting empty, except for the occasional smoker. The characters, thank goodness, moved back to the bar.

Anyway, nearly every visit with Joe includes a mention of his good buddy Tony, as well as Joe’s determination to get his two artist-friends together. Tony Bennett, you see, paints. And so it was with beaming pride that I overheard Mr. Bennett tell George last night, “Now you ……… you are a great artist.” 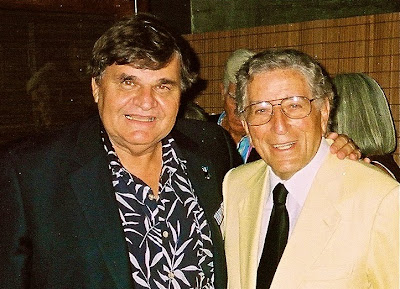 What a compliment! Especially after the performance we’d just heard. At eighty-two years old, Tony Bennett sings his classic songs as though he’s thirty-five and, what’s more, as though he’d waited years to be able to share his favorite songs with his fans. There was no hint of boredom or old age. There was a real love of performing, and he danced and sang and smiled with joy at what he’s able to do. It was as if there was no place in the entire world that could make him happier than being right there and doing just that. At one point I even thought to myself that he seemed surprised and humbled that we all showed up.

One of the coolest things about a healthy old person is that they remember everything that ever happened to them. They lose their shyness and their concern for what people think. They live for living. The old Italian men often fall into this category (at least the ones I’ve met), although I’m reminded of this story George tells about former Louisiana Governor Jimmie Davis (not Italian), when at nearly one hundred years old, he shuffled onto the stage, introduced his band, and stood straight and tall as he danced a jig and sang his mega-hit, “You are My Sunshine,” while the audience went crazy.

But back to the Italians……

Mid-concert (the Tony Bennett concert, that is), George leaned over and kee-hee’d to me, “He’s just like Joe Segreto, but with a different head.”

Between songs, as we stood and clapped our hands raw, George laughed and laughed, not because it was funny, but because he was so happy. I’ve only heard that reaction from George one time before, which is why I recognized it.

Don’t get me wrong, George laughs all of the time at funny stories, Cajun jokes, and well, at me (as I was just reminded, when he looked over my shoulder as I write this, laughing, “Man you talk a lot,” followed by more laughter at my expense as he recounts his recent gin rummy victory.) But laughing at the concert was different, and I recognized it immediately as the same hearty laughter I heard at a Three Tenors evening in Las Vegas many years ago (and no doubt the same laughter from that Jimmie Davis performance), when three aging Italian men gestured with great exaggeration to their audience ----with gratitude for our applause (Carreras, with hands over his heart), an out-pouring of love (Domingo, with arms outstretched), and the confidence of his own magnificent performance (Pavarotti, reaching to the sky). George was lost in joy, unable (and unwilling) to control his laughter. And last night, as he laughed the same way, I cried, over the beauty of the music, the beauty of this talented performer, and the beauty of my happy, happy husband. I cried so much that a false eyelash crawled down my face like a spider, so that when I turned to look at George, he laughed even harder.

And as this stylish, gracious, Italian man sang (about his hometown of Astoria), “Just a little street where old friends meet …..and treat you in the same old way, ” I thought about New Orleans and the characters at Eleven 79 and the psychics at the Bottom of the Cup and the waiters at Galatoire’s and the school children at the New Orleans Museum of Art and the guy who traps our rats, and the workers at the new gallery on Royal Street, and the ghost tour guides, and the artists on the fence, and our landlords Norbert and Myra, and even the cranky neighbor who keeps shutting down our construction because she can’t get any sleep before heading to her night job, and I felt touched by it all. There’s nothing like a hometown (however you define it), and we could not have been more beautifully reminded of New Orleans, ironically, than by our afternoon in San Jose at Hicklebee’s Children’s Bookstore and our evening with Tony Bennett, under the stars at a California winery.

I'll end with a photo of Myra Landry, an ex-nun who has called me “Winnie” for so long that I’ve come to like it (from her, that is) and who, along with her brother Norbert, has been our landlord at 721 Royal Street for the past twenty years. 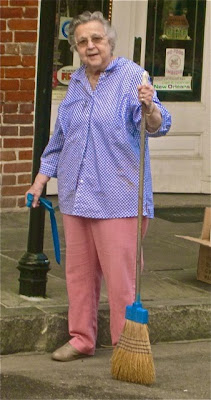