The Creative Competition in Two Parts

I grew up in an artistic household in Fort Walton Beach, Florida. My parents, although originally from New Orleans, settled there when my dad was stationed at Eglin Air Force Base. In the first ten years of their marriage, they lived and traveled all over Europe and Asia with the military, and by the time we moved to FWB, they had collected the objects I treasure most today: the Italian wine glasses, the Oriental screen, the Persian prayer rug, the rubbing from a Buddhist temple, the grandfather clock, and the King’s chair.

They divorced when I was six, and my dad went on to other exotic locales (eventually returning to FWB), while the three girls --- my mother, sister, and I --- established an utterly feminine planet in our condo on the beach, filled with this collection of worldly, creative things. In addition, my mom painted --- on canvas or the furniture or stained glass or the walls --- always in shades of turquoise and bright red. It was a colorful, warm, and girly home, covered in not only her paintings, but also the ones she traded with fellow artists at neighboring booths at the Boggy Bayou Mullet Festival or the Pensacola Art Fair. She won ribbons most years and celebrated afterwards with friends on our balcony overlooking the Gulf of Mexico, toasting her success with homemade sangria or hot buttered rum (depending on the time of year). Later she would turn those ‘winners’ into note cards, (easily created at her place of business, Vitro Press), which my sister and I tied with ribbon as gifts for her friends and our teachers the following Christmas.

Along with art, our house was full of music. I can’t think of those days without hearing in my head Bob Dylan or Charlie Rich or Neil Diamond or Gordon Lightfoot, and I certainly can’t think of those days without remembering the music lessons. Piano, guitar, flute, piccolo, banjo --- I played them all. I even took harmonica lessons. My mom played piano nearly every day, as did my sister Heather (along with the French horn, poor thing), and around the holidays we were a dreadful but enthusiastic family band, with two at the piano and the other playing any handy instrument (or just dancing around the room ---- yes, we had the dance lessons too).

But if there was a downside to all of this music, it was the competition, specifically the dreaded ‘chair’ in band (it’s a well-known fact that teenage female flautists are fiercely competitive), and worse, far worse, the twenty students and parents gathered in Mrs. Ungerer’s living room for the annual piano recital. All I remember are the years I froze (possibly every year, now that I think about it), forgetting my memorized Beethoven or Mozart and falling back once again on “Linus and Lucy” from A Charlie Brown Christmas, the only music I recalled (and still recall) under pressure.

But what about George Rodrigue? He grew up an only child with older, traditional, and devoutly Catholic parents. They lived in a red brick house built by his father in downtown New Iberia, Louisiana, with white walls, American country furniture, The Shadow, Green Lantern, and Lone Ranger on the radio, and not a painting or print in the place. He entered exactly two competitions in his life, and neither one was cause for celebration, excitement, or anxiety.

The first was in New Iberia in 1952. The Sears/Roebuck catalogue store sponsored a coloring contest for area schoolchildren. George was in the third grade; he colored everyday in anticipation; and he was focused on the prize --- a child’s tool set.

His mom took him to the catalogue store, where they picked up the outlined drawing from Mrs. Leblanc, the manager. When George returned to submit his picture, he learned that they already had a winner, little Ross LeBlanc, nephew of Mrs. LeBlanc. Today, big kid that he is (and I truly mean that in the most endearing possible way), George is still bitter, because no one could color better than George Rodrigue in the third grade, and because he really, really wanted that tool set.

Far worse, in my opinion, was an area competition held at the Morgan City Civic Center, about sixty miles southeast of Lafayette, Louisiana, where George was living at the time. It was 1969, and George, at age twenty-five, was recently back from the Art Center College of Design in Los Angeles. He was searching for his style as a landscape artist, occasionally dabbling in other things as well (such as the portrait below from photographs of a model at art school). 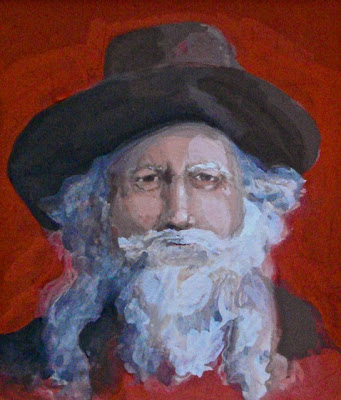 His work changed a great deal during this time because of a conversation with a famous local architect, A. Hays Town. Through a mutual friend, George met Mr. Town and brought him paintings like the ones below. 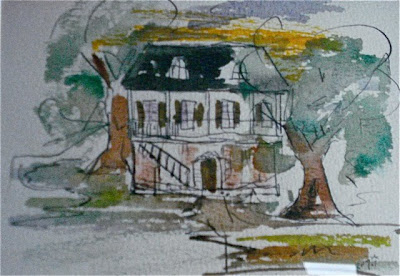 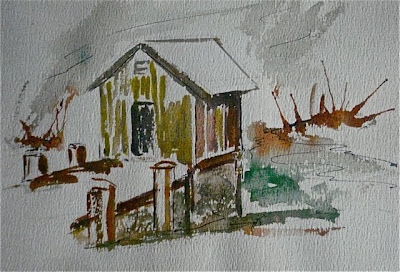 “I want you to start over. You’ve got to treat your canvas like it’s a jewel. If it’s precious to you, it will be precious to others as well.”

In all of his years at art school, no one had ever talked about art in this sort of abstract way. It completely changed George’s thinking, and his next painting looked like this… (12x16, 1969) 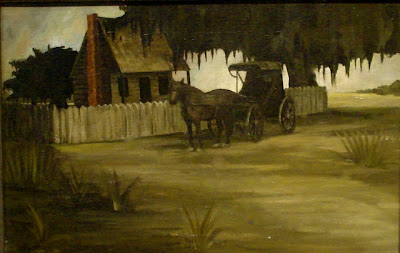 He entered it in the Morgan City Louisiana Art Competition. The painting was to hang alongside other entries in the Civic Center for a month, during which time the public could visit and the works would be judged. After a month without word, George assumed he lost and went to pick up his painting. The director told him,

“I’m sorry Mr. Rodrigue, but we had to disqualify you. This painting never hung in the art show.”

“Well, we assumed you did not understand the rules. The competition was for living artists only.”

George protested of course, “But I’m alive! I painted it!”

She stared at young George and asked him to leave, arguing that the work obviously was an antique painting.

On his way out, George glanced at the winning paintings, nearly every one of which featured giant magnolia blossoms. He never entered another art contest.

But the wise words of A. Hays Town stayed with him, and George paints in the same way today, with deliberate, careful strokes, the bi-product of this jewel-type treatment so that each piece of art, as he creates it, is the most important and precious work he’s ever painted. (pictured, 20x24 from 1970, 48x60 from 2009) 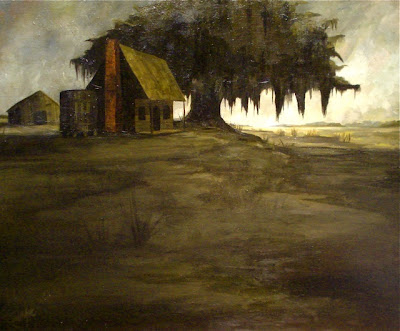 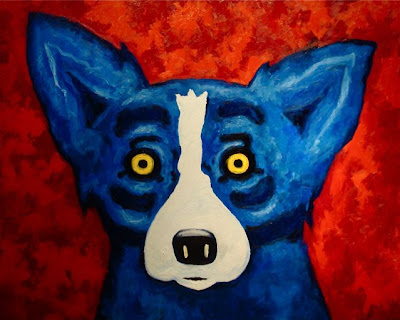 Although he never again entered a competition, George did judge the New Iberia Sugar Cane Festival Art Contest in 1972. His Aioli Dinner was on display for a short time that year at the New Iberia Library, and this qualified him as a local art celebrity. He remembers fondly that Mrs. Keene, his childhood art teacher, stopped by the exhibition and beamed with pride as he judged the art.

Almost forty years later, George is ready to try again --- not with an entry, but with his own contest for Louisiana high school seniors. This time he’s formulated the concept himself, including a theme, Louisiana: The State We Love; scholarship money awarded through his foundation; and even a venue for exhibition (winning entries will hang on the walls of George Rodrigue’s French Quarter Gallery for three weeks next spring). What will he look for in judging these works? The foundation's website lists several categories, all of which I’m sure he’ll take into consideration. But if you’re reading this, and you’ve decided to go for it, remember these tidbits:

-George Rodrigue was confused and offended when he was disqualified from an art contest simply because his work did not look like everyone else’s.

-He claims that the only artist to ever inspire him is Salvadore Dali, because he had fantastic, original ideas.

-The best piece of advice he ever received is to “treat your painting as though it is a jewel, because if it is precious to you, it will be precious to others as well.”