How Baby George Became an Artist

George Rodrigue grew up an only child in New Iberia, Louisiana, a small town in the heart of Cajun country. His father, also named George Rodrigue, was a bricklayer by trade, but he dabbled in other businesses as well. As the youngest of thirteen children, Big George (as he was known around town) took on family businesses as his siblings died. And since George’s mother, Marie Courregé Rodrigue, was the youngest of eleven children, the couple inherited several of those businesses as well, eventually running a bar, a trailer park, and even a portable concrete burial vault service.
Big George designed and fabricated brick boilers for sugar mills throughout South Louisiana and Texas. He was a contractor who built houses, including the duplex where Baby George (as the family called him) was born in 1944, located on West Main Street in New Iberia ---the old Hwy 90 Spanish Trail that ran from New Orleans to Santa Fe. In 1951 Big George completed a family home on St. Peter Street, where Baby George would spend his childhood and which his mother would call home for the next fifty-seven years. 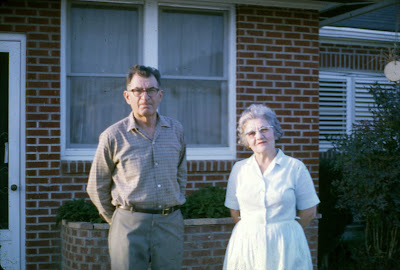 New Iberia in the 1950s was an interesting mix of people, with not only a large Cajun population, but also the Lebanese, Italians, African-Americans, and the descendents from the area’s original Spanish settlers (hence the town New Iberia, named after the Iberian Peninsula in Spain.) The town had a large Catholic community, largely rooted in the descendents from the 1755 Grand Dérangement, when British troops displaced some 25,000 French people in Nova Scotia who refused to pledge their allegiance to King George of England and the Protestant faith. George’s family is descended on his father’s side from four brothers who migrated into South Louisiana from Canada during this time. His mother’s father, Jean Courregé, however, came to Louisiana directly from France in 1860. (I’ve always had a hard time wrapping my mind around these dates. George’s grandmother, also named Marie Courregé, had a baby every two years beginning with Tante Magitte in 1880 and ending with George’s mother in 1905.) 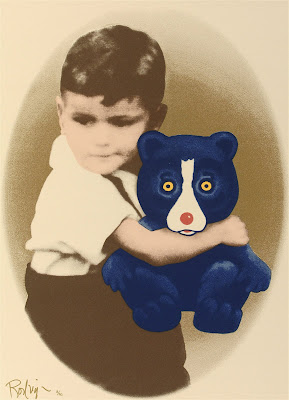 George remembers clicking rosary beads as a small boy on his grandmother's front porch with Tante Magitte, as they recited together the Catholic prayer in French. And although he has a basic understanding of the language when he hears it, George didn’t grow up speaking French, and he was discouraged from speaking it at home. It was the language the adults used when they didn’t want him to understand what they were saying. Furthermore, beginning in the 1930s there was a concerted effort to squash the French language in Louisiana schools. 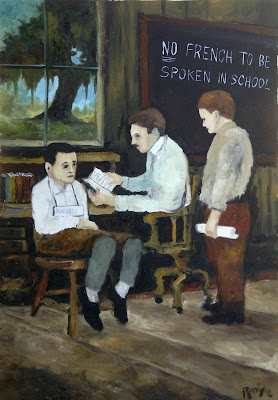 George’s parents spoke a Cajun dialect, and they were self-conscious about what they considered to be an inferior form of the language. They hoped he would learn the correct French in school eventually, as there was a growing pride in Louisiana’s French heritage during this time, however those courses did not come about until George was a senior in high school, which was too late.

It should come as no surprise that 1950s New Iberia was not exactly an art mecca. There were no museums or art galleries, no art classes in school or art books in the library, and no paintings hanging on the walls at the Rodrigue house or the homes of their friends.

But George set his course as an artist at nine years old, during a bout with polio, and would not be deterred. Three years later at age twelve, he convinced his mother to approach Mrs. Keene, the only artist known to her, about instruction. In six months of Saturday morning classes, he completed three paintings, all still in his possession today: a fruit still-life, a country road, and two quail in a corn patch. 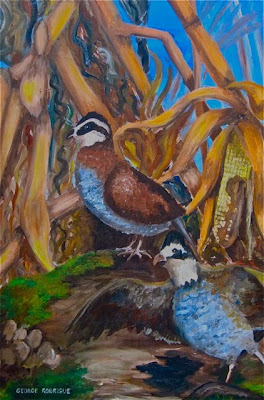 Following Mrs. Keene, George continued his education with correspondence courses (remember the turtle drawings and copy-this-portrait contests from the backs of magazines?) through an art instruction school in Minneapolis, Minnesota. When the school’s southern sales representative called on the Rodrigue house to let them know that George had been accepted, he told George’s parents (as they wrote out a $400 check to cover the four-year course) that at thirteen years old, George was their youngest student to date.

It was not long after this, at age fourteen, that George saw his first art exhibition. The actor Vincent Price teamed up with Sears Roebuck, which was primarily known as a tire store, to travel the country with an art show and help promote the store’s expanding efforts as a department store. George’s parents drove him the seventy miles to Baton Rouge, where Sears and Price (who wasn’t there that day) presented the show, offering original paintings and prints for sale.

George would see only one other art show in the next five years, a Sunday afternoon exhibition at Compton LaBauve’s Jewelry Store in downtown New Iberia, featuring western artist Joe Grandee, a cover illustrator for True West Magazine. According to George, who was a senior in high school by this time, when he asked Grandee if the visiting Texan had gone to college and he said No…

“Well, that’s when all the trouble started.”

His parents, who had encouraged his hobby all along thought of it as just that --- a hobby. They were confused by George’s determination to pursue art as a career. Didn’t he want to work for the telephone company? What’s more, the only job they understood in the arts was commercial illustration. When George announced that he was going to paint pictures for a living, they were shocked and disappointed; so much so that George compromised with his parents and headed off to college anyway (to the University of Southwest Louisiana in Lafayette for Fine Art Studies, followed by graduate school at the Art Center College of Design in Los Angeles), but that chapter is better saved for another blog entry, or else I might as well just hang it up and write the book.

These childhood experiences continue to guide George in his career today. As a child he craved access to art and art classes, but it simply wasn’t available. He wanted to be taken seriously as an artist from the beginning, and yet his own mother passed away in 2008 (at age one hundred and three) still waiting for George to get a real job.

That is absolutely true; she never understood why a person would ‘waste their money,’ not just on George’s ‘pictures,’ but anyone’s, and she often marveled that George could pay his bills. She even purchased his cemetery plot in 1967 after George’s father died, as well as one for herself and later George’s boys, convinced that when the time came, George would not have the money.

It’s because of these memories that George founded the George Rodrigue Foundation of the Arts (GRFA), dedicated to not only art education specifically, but also incorporating the arts into other academic subjects, such as math, history, political science and more.

And it’s because of these memories that he’s written ten art books (The Cajuns of George Rodrigue, published in French and English by Oxmoor House in 1976, was the first book published nationally on the Cajun culture); that he visits and occasionally teaches school art classes; that he participates in art exhibitions; and that he spends time at children’s hospitals, such as last week in Memphis and this week in Austin, where he and Rodrigue collectors Don and Chris Sanders donated an eight-foot painting on chrome (so that the kids see their reflection with the Blue Dog), unveiled at Dell Children’s Hospital just yesterday with Texas Governor Rick Perry. 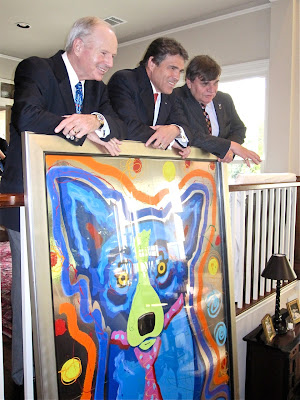 I should also mention the Sanders’ great generosity in donating six thousand copies of Why is Blue Dog Blue? and Are You Blue Dog’s Friend? so that each new patient going forward receives a book. The Austin experience, like Memphis, was so rewarding, especially our visit with the children, when George drew and presented to each of them an original Blue Dog sketch, that we’ve made plans to do the whole thing all over again at Texas Children’s Hospital in Houston in a few months.

So those of you who’ve been following this blog now have a taste for our life on the road, and you may be wondering,

“But when does George work?”

He would tell you,

“Work? This (the travel, the social obligations, the books, etc) is work. Painting is fun. It’s all of the other stuff that’s work ---- everything that has to be done so that I can continue to paint.”

The exception, I know he would point out, is his time with the children, especially his recent visits to the children’s hospitals and his on-going commitment to GRFA. Not only is it fun, it’s also a chance for George to make a difference in the life of a young artist and perhaps expose them to art in a way he only dreamed of as a child.

It's also inspiring. And since today we return to New Orleans for a few weeks, perhaps we’ll see a new painting on this blog yet.