In 1993 George Rodrigue and I went to Paris. We recently were dating, and I was relishing this artist-at-my-fingertips. Today I tend to take that access for granted, and I have to remind myself that not everyone has this sort of expertise along while visiting a museum or watching Frida or just sitting at home perusing an art book. (I should mention that I gave up on art magazines long ago, because I grew tired of hearing George groan that everything looks the same, and because eventually I started to agree with him --- all somewhat ironic given the nature of this blog.) But back then I pinched myself daily, and I had questions and discussion topics at the ready, lest the relationship crumble that very afternoon.

Our first stop was a small museum located in the Tuileries Gardens, the Orangerie, a building Claude Monet chose to house his Water Lilies. I have to admit that it wasn’t high on my list. I was only a few years out of college, and I still had some of that university art class cynicism rolling around in my head. My roommate slept on Monet bed sheets, and another friend had Monet posters that matched her coverlet, and another had a Monet beach towel. In the store I had seen placemats and coffee cups and dishes, not to mention t-shirts, neckties, and umbrellas. Didn’t all of this commercialism diminish something? I mean, wouldn’t it be impossible to toss the prettiness, the decorative kitsch, the trendy everybody’s-favorite-artist aside and look at these paintings with fresh eyes?

Something terrible had happened to me, and I didn’t even know it. Although (thank goodness) the affliction seemed to come and go, for the most part I had lost my ability to see.

We walked into a smallish room with four or five enormous mural-type paintings surrounding us. The canvases just fit the space, and they curved along with the walls, so that George and I formed the pupil of an eye as we sat on the single bench at the room’s center. We were the only visitors.

I am ashamed to admit that on first glance I was unimpressed. All I saw was wallpaper. We sat in silence, and George stared until I couldn’t take it anymore:

"What do you see? What are you looking at? I mean, I get it --- he was painting the reflections, the light, the impression left on the water. And yes, it’s beautiful to look at. But what does it say? What’s the big deal?”

And with that, he began to tell me about Monet. He said that Monet paved the way for all of the art following him, for Abstract Expressionism, Surrealism, Pop, and even the art of Rodrigue himself. He made me see that before Monet no one had painted a landscape, or in this case a pond of water lilies, without a horizon line. There was no foreground or background. There were no boundaries framing a subject or a narrative. There was just reflection. There was just the duplication of what Monet really saw ---- not what he manufactured, not what he would see were it an ideal day or a perfect world, but what he actually saw without the influence of the rules of art or established ideals or the opinions of others, even if the result was something unrecognizable, a mere ghost of the tangible thing. No one had ever done that before. Imagine that. 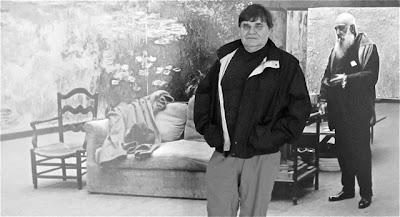 We sat for three hours and talked about these paintings. I fell in love with them, and the appreciation grew in me for what Monet had accomplished, for the creative genius behind his innovation, for the shock he gave the art community of his day, and for the gift he left the world.

On the way out we stopped in the museum shop where I bought a Monet desk calendar and a book of postcards.

I’ve seen many Monets at many museums since, but none that matched the Orangerie paintings. Just today George and I visited the Museum of Modern Art in New York, where their collection of large-scale Monet Water Lilies is on view. They too are slightly curved, and the museum’s exhibition echoes the Orangerie, displayed on curved walls in a single room with a center bench. This time, of course, there were crowds of visitors, so my hopes (and I had them) of recreating that momentous afternoon sixteen years ago were squashed quickly. But I think that even if we had been alone, it still wouldn’t have been the same. I asked George about it.

“Something’s not right,” I said. 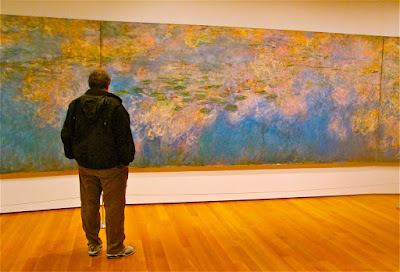 And so he did. Don’t get me wrong; it’s still an important show and absolutely worth the visit. But I’d be lying if I said that those old wallpaper feelings didn’t start creeping up on me again. I hung in there, however, and I stayed longer. I closed my eyes, and I let my mind picture the aging Monet tending his gardens. I tried to imagine what he saw. And when I opened my eyes, I saw more clearly, and like a dragonfly (as the New York Times review put it), my eyes darted from here to there over the colors and in and out of the depths, until I soaked it all in at once. 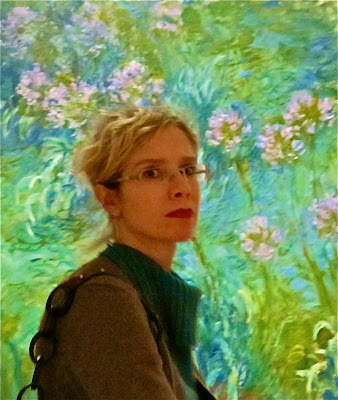 It may not have been the philosophical and wholly memorable experience of the Orangerie, but the denouement came nonetheless: there is absolutely nothing wrong with appreciating a beautiful painting.

Posted by Wendy Rodrigue Magnus at 8:36 AM