Tombs in the Life and Art of George Rodrigue

As I mentioned briefly in my last post, George’s father was in the tomb business while Baby George -actually, known by this time as Big Rod- was in high school. This impacted George more than you might think. Among other things, he drove his father’s large black truck to the all boys’ school, Catholic High (formerly known as St. Peter’s College), in New Iberia, Louisiana, testing the character and sense of humor of his dates by their reaction to the words written on the side: “Rodrigue’s Portable Concrete Burial Vaults.” 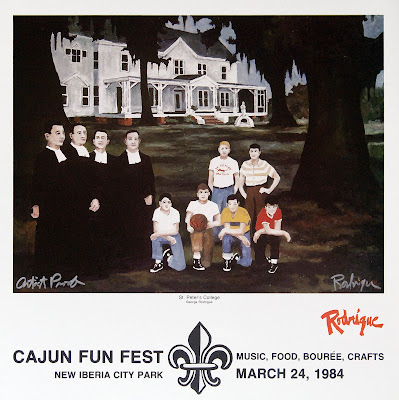 With twenty-two aunts and uncles, all older than his parents (in their forties when George was born), George grew up attending funerals. He understood death and burial, and he was well-instructed in the Catholic beliefs concerning the after-life. He remembers his mother white-washing the tombs of her parents on All Saints Day.

And I remember his mother, in a (quite humorous) jealous fit, refusing to visit Big George’s grave for several years after she discovered fresh flowers at his tombstone: “Those hussies," she said, "they’re still after him!”

He also grew up in a community that produced strangely beautiful ‘cities of the dead,’ a description often applied to cemeteries in South Louisiana where, due to the high water table, the dead rest above the ground in concrete tombs, lest they float up after a hard rain.

The Courregés (George’s mother’s side) have a family vault. George tells a great story about his last living aunt, ‘Bertha the Old Maid,’ and his mother Marie. In the late 1980s Bertha, already in her nineties, decided to clean out the family tomb before moving in herself. Every day she sat outside in the cemetery in a lawn chair under an umbrella, supervising the workers she hired for the job. Marie, curious as to the progress, stopped by the site. Poking around the trash pile, she noticed a cardboard box containing a skull and other human bones. Alarmed, she confronted Bertha, who explained

“Oh that’s nothing. That’s just some old bones we found in the tomb.”

“But that’s Mama! You can’t leave her here with the trash!”

She put the box of bones in the trunk of her car and left. Several weeks later, George visited his mother in New Iberia and happened to open her trunk.

“Oh I didn’t want to you see that. Bertha threw Grandmere out with the trash, so I'm keeping her until the tomb’s ready.”

And that’s how George’s grandmother, dead for more than fifty years, spent three weeks riding around town in her youngest daughter’s Dodge Dart.

Not everyone is buried above ground, however, and the Rodrigue’s tomb business advertised air-tight, heavy chambers which many people buried below ground --- a trend that gained popularity during the 1950s.

Sure enough, the rain caused problems. It was not unusual for George’s father to send him on a job when a family complained that Grandpa Hebert and his tomb floated out of the ground. Fitted with shrimp boots and a sledge hammer, George waded into the flooded area and knocked a corner off of the concrete box. Filled with water, it settled back down. So much for air-tight.

As a teenager, George got a real kick out of the tomb business. He not only enjoyed driving the truck and sinking the tombs (in that teenage guy traipsing through the mud, zombie movie kind of way), but also he put the discarded coffin boxes to good use. Apparently the coffins arrived in heavy, giant pieces of cardboard. George saved the materials and used them each year to create elaborate Christmas decorations covering the house on St. Peters Street.

Sometimes he covered the entire front --- one year Santa and the reindeer with elves, another year a nativity scene with Wise Men and camels, and still another with Frosty the Snowman and friends. After winning the decorating contest (and the $25 prize) two years in a row, the town committee disqualified him, insisting that someone else have a chance.

I wonder what they would have thought had they known that Baby Jesus was cut out of a coffin container.

Beginning in the late 1960s, these tombs are a common subject matter for George. The ‘cities of the dead’ help define area culture, and because, like the oak tree and the Cajun people, the above-ground cemeteries are unique to south Louisiana, they appear often in Rodrigue works.

Early paintings show the Cajun people living in the cemeteries, no different than the streets of downtown New Iberia. Again, burials and tombs are inseparable from Cajun history. In addition, George describes his Cajuns as ghosts, all in white, glowing with their culture, beneath (and indeed trapped within) the black trees.

(In this painting the Mardi Gras King chooses between two paths of life, a future by chance or a future of love, all directed by the knight) 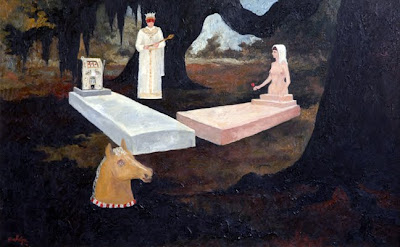 With the Blue Dog, George continues to incorporate tombs into his designs. This plays well with the idea of the loup-garou, the Cajun werewolf that lurks in cemeteries and sugarcane fields, and the inspiration for the Blue Dog series. It also adapts well to the idea of George’s deceased pet, Tiffany, a ghost searching for her master and landing anywhere he can imagine. 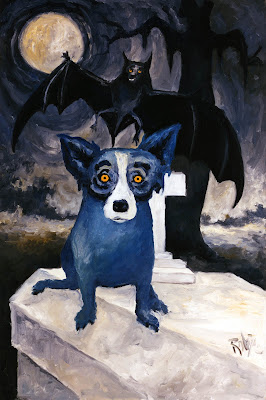 Later, tombs become an integral part of the Bodies series. In fact for several weeks in 2003, George and I visited every above-ground cemetery in the New Orleans area as he formed his designs for these new works. This time the tombs complement allegorical figures of life and death, as well as Jolie Blonde and other Rodrigue ghosts.

He refuses to explain this series in detail, lest the works lose some of their mystery and intimacy --- sort of like the silent mystery within the ‘city of the dead’ or even a grotto, something we also visited for his inspiration numerous times in recent years. (Although long since abandoning established religion, as a child it was a part of George’s daily life, and for years he prayed at the grotto in New Iberia on the grounds of St. Peter’s College). 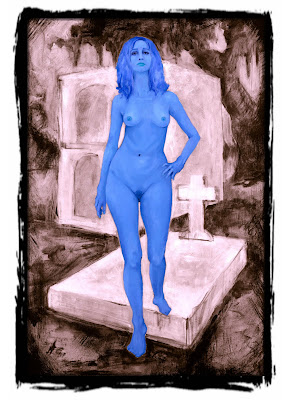 This year, as he explores painting with water-based oils, he returns to the classic landscape and, unsurprisingly, to the tombs. 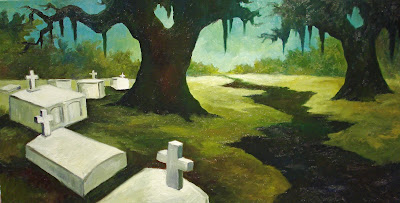 As I decorate our house with mummies and skeletons, I remember to see these tomb paintings, some of which hang right in front of me. I easily could write about one Halloween in the early 1990s when George suspended twenty life-size skeletons, spray-painted blue, on a clothes-line across the front yard. His mom, dressed as a pirate, sat alone in the middle of those bones and handed out candy (one piece per child), while George hid behind her near the front door and gave each trick-or-treater a Blue Dog print. But maybe I’ll save that story and others for next year.