André and Jacques: The Rodrigue Brothers

George Rodrigue has two sons, André (born 1975) and Jacques (born 1981). They are as accustomed to the question “Do you paint?” as I am, maybe more; however, neither one followed in their dad’s artistic footsteps. 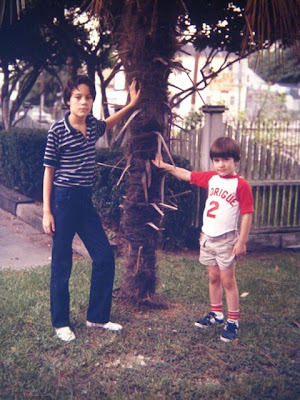 Over the years George has painted his boys many times. Kiss Me, I’m Cajun, featuring André, is probably the most famous. As I’ve mentioned in previous posts, the Cajun culture was relatively unknown to the world outside South Louisiana in the 1970s, and so imagine George’s surprise when he found this child’s t-shirt at a flea market in Houston, Texas. 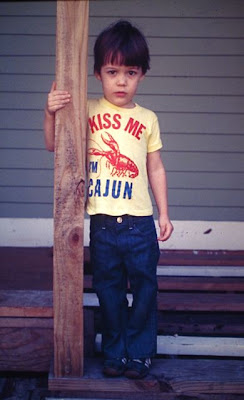 He saw this as a sign that the Cajuns had broken out, and that perhaps the rest of the country would learn about this unique culture after all. He commemorated this realization with a painting of a typical Cajun boy holding his cane pole and his catch. The young child leans against a young oak and stares at us. 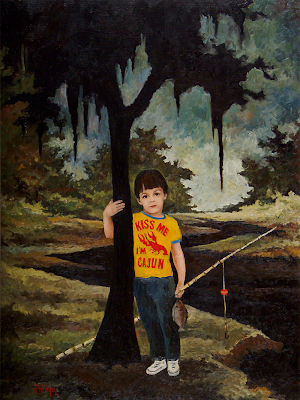 Soon after he completed it in 1979, the painting graced the back cover of the Lafayette Junior League cookbook, Talk About Good II, which they recently re-printed with flipped covers, placing André’s portrait on the front. It hung last year at the New Orleans Museum of Art’s (NOMA) exhibition Rodrigue’s Louisiana, and André blushed with the attention as he signed cookbooks and posed for pictures. Nearly all Louisiana women know this cookbook, and the accessibility of the original painting (for the first time ever on public display) and especially its tall, dark, and handsome model, was a highlight for many.

George approached this concept again years later with the Blue Dog, an homage to the original painting of André. 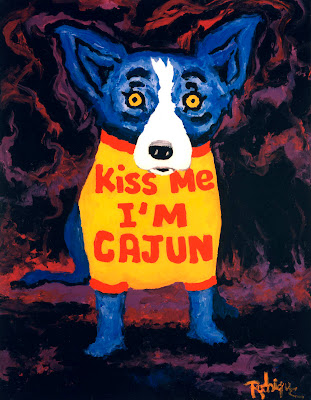 Paint Me Back Into Your Life features a young Jacques alongside the Blue Dog and holding a painting. For the photograph George posed Jacques holding a different image – a painting by his brother. 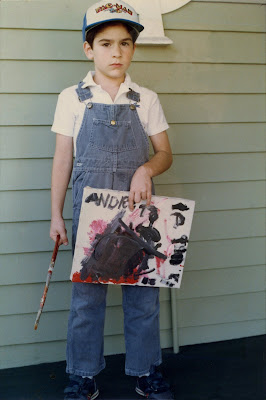 To create the final portrait, however, George sketched his design and left a blank square in place of André’s painting. He then stationed Jacques at his easel with his paints and brushes and asked him to fill in the blank square directly onto the large canvas. Jacques painted an oak tree and because it was the holidays, added Christmas stockings. 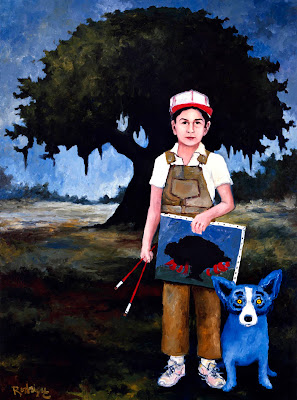 Like Kiss Me, I’m Cajun, this charming painting also hung in the NOMA exhibition, where an embarrassed Jacques signed autographs and posed for pictures. In addition, George chose this piece as the signature painting within all materials related to the George Rodrigue Foundation of the Arts (GRFA).

Other paintings with André and Jacques include friends and traditions, such as André boiling crawfish with Boudreaux, playing ball with Bud Petro, or opening presents with Santa Claus… 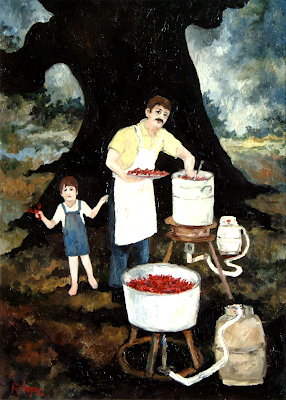 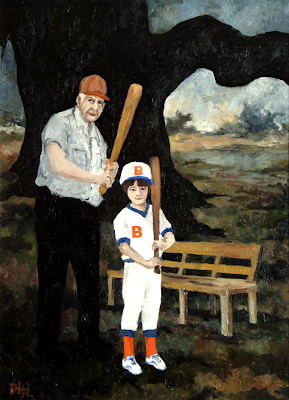 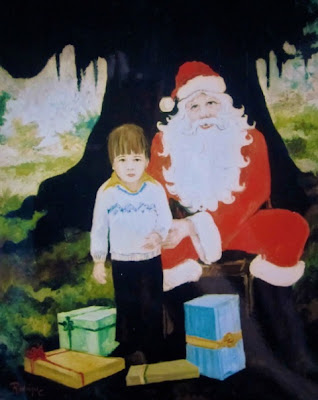 …and Jacques playing in the backyard or dancing at the fais do-do. 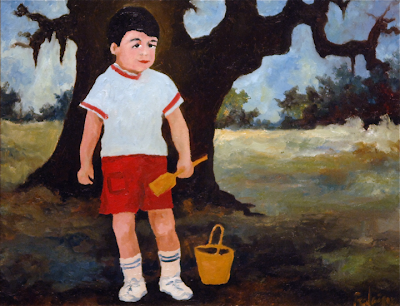 Tiffany, the family pet, also makes an appearance, pictured here with Jacques, even though she died in 1980, the year before he was born. 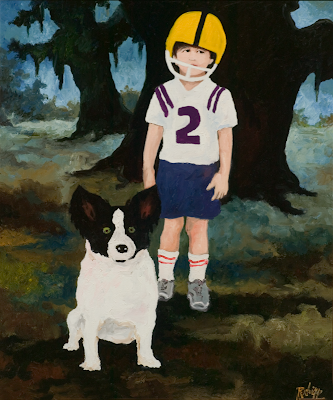 I first met André and Jacques in 1991 and spent increasing time with them after George and I started dating in 1993. When we married in 1997, we all lived in Lafayette, Louisiana in a 1950’s plantation-style home located in an old family neighborhood called Bendel Gardens (as in Henri Bendel of New York shopping fame). George’s mother, in her 90’s at the time, also lived with us, as did George’s friend Romain Fruge.

We had a busy house with people coming and going all day long, and it was an adjustment for me, after having lived on my own for twelve years. I’m forever grateful to Kay Bowen, who gave me Marcelle Bienvenu’s Who’s Your Mama, Are You Catholic, and Can You Make a Roux?, a cookbook that saved my life with my new Cajun family and which continues as a staple in my kitchen. (I actually sent a letter to Ms. Bienvenu and told her so --- the only fan letter I’ve ever written).

Game days, something I’d never experienced living with my mom and sister, were huge and meant a dozen or more extra boys. I became adept at one-pot cooking and often harvested from our backyard, where I dug in the dirt most mornings tending to the okra, tomatoes, jalapenos, and blackberries. These were happy days, full of activity and chaos, an interim period really, as we observed George’s aging mother (she died last year at age 103), and as these young boys became young men. Even as kids they were independent and brave, biding their time with hockey, soccer, and girls until before we all knew it they were grown and ready to go off on their own.

(pictured: Jacques and André with their grandmother Marie Rodrigue on her 103rd birthday, and a family friend Joyce Boudreaux) 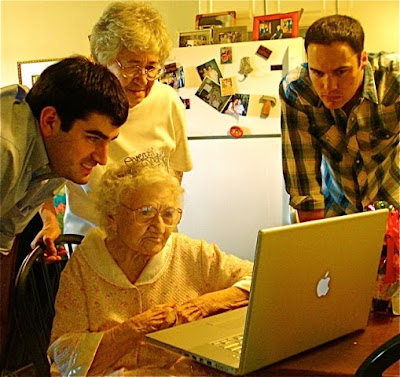 André lives in Lafayette, where he’s a student of history at the University of Louisiana (ULL). He’s one of the most well-read, intelligent, genuine, and kind-hearted people I’ve ever known. Several years ago we took a family vacation to a Wyoming dude ranch, and when I asked André as he lounged on the front porch what he was reading, he held up The Napoleonic Wars. (In embarrassing contrast, my idea of light reading on that trip was Blonde by Joyce Carol Oates).

He’s a collector of soccer jerseys and Star Wars memorabilia and Tide boxes (all sizes). And no matter what the request the answer is always ‘yes.’ He’ll drive twelve hours each way in two days if it means making a friend’s birthday party or helping someone move. His heart is ‘as wide as this world.’* Ten years ago, as he lingered for weeks in a depression of sorts, George and I, worried and at a loss, confronted him and insisted he share his troubles, to which he replied, “China.”

Together with attorney Steve Santillo, André and Jacques own the Blue Dog Café and Jolie’s Louisiana Bistro in Lafayette, Louisiana. André, because he lives in Lafayette, remains involved on a daily basis, whether he’s weighing in on the new menu, brainstorming in promotional meetings, painting the walls around the iron staircase, or making hundreds of seafood wontons in the back. 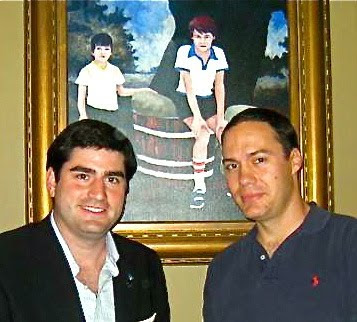 Jacques lives in New Orleans in an 1850s traditional shot gun house, located just behind our home in the Faubourg Marigny. After graduating from Louisiana State University, he attended Tulane Law School, and (to the great relief of myself and his father) chose to join our business --- the galleries, the foundation, and everything it takes to run both of those entities, along with countless smaller projects.

An attorney in the family is convenient, to say the least. He’s vested personally, and so he’s learned to be on call twenty-four hours a day, and he’s no longer surprised by the odd scenarios that often cross his desk. He handles copyright issues, contracts, licensing (specifically for books and non-profit use), and any number of other near-daily legal situations. And, like his brother he’s earned not only our respect, but also that of our staff. He works where he’s needed, whether it’s moving and organizing the warehouse; selling from the galleries; accompanying his dad on book events; lecturing to students about his dad’s work; or helping to oversee construction projects, such as the new Royal Street gallery. (pictured: father and sons as The Blues Brothers) 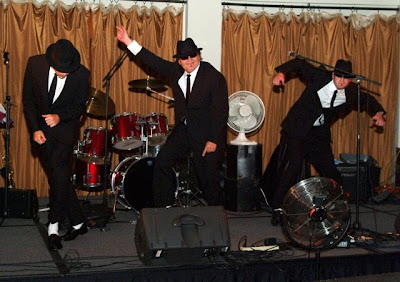 With all of our good fortune, the thing we are most grateful for, most pleased with, is George’s sons. George is a proud father to be sure, and he encourages his boys in their passions, even if it means expanding the warehouse to include ten more boxes of collectible action figures, or approaching his publisher with the latest edition of the Bear Head calendar. He takes them seriously in all of their endeavors, and he never denies them anything if possible. 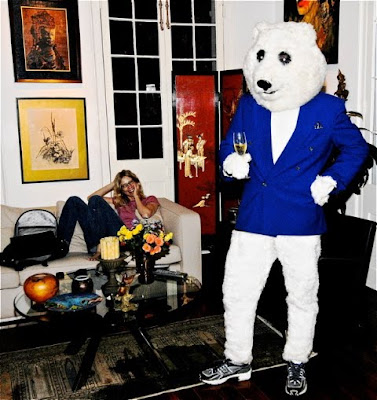 I asked him about this once. I’ve already written in the post “How Baby George Became an Artist,” about his mother’s insistence that he ‘get a real job.’ But he also told me a story about having saved his pennies for months to buy a telescope, only to have his parents return it, claiming it was a waste of money. Similarly, the last present he received from them was Christmas 1954. He was ten years old, and they felt it was no longer necessary. He decided as a boy that his own children would have everything they wanted, and he’s done his best in that regard. Are they spoiled? Surprisingly not, and even more surprising, they rarely ask for anything excessive. In fact, in recent years they rarely ask for anything at all. 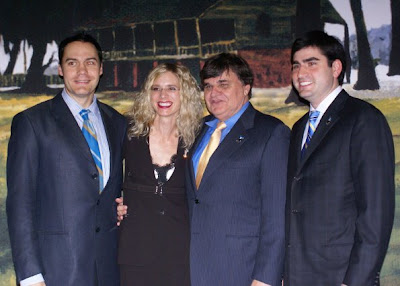 For me, although André and Jacques are not my children, they are my family. I’ve collected these pictures and saved this essay for several months, wanting to post it now, the week of Thanksgiving. The older I’ve gotten, the more I’ve realized that nothing is more important than family, and as we head to our rented cabin in the Smoky Mountains, meeting more family for a week of board games and BMX and turkey, I am immensely thankful. 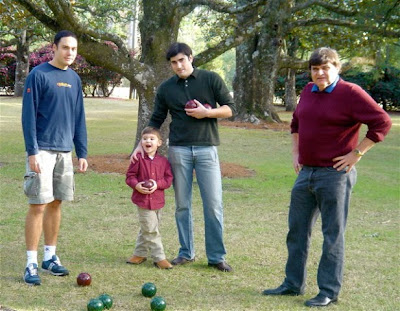 I wish you the same.

*as said by yogi Sarah Powers: “Let your heart be as wide as this world.”

Posted by Wendy Rodrigue Magnus at 6:39 AM