By 1993 the Blue Dog had far-reaching fame. After the success of Absolut Louisiana the previous year, Michel Roux of Carillon Importers commissioned Absolut Rodrigue, which appeared full page in hundreds of magazines that year, and continued in hundreds more in the following. As recently as this past summer, it was the most highlighted of sixteen Absolut art pieces, including Jean-Michel Basquiat, Keith Haring, and others, at the Galway Art Festival in Ireland. 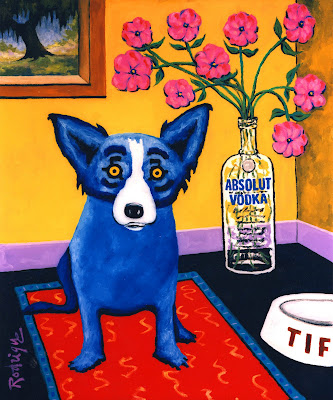 More than anything else it was Absolut Rodrigue that caused an overnight change in the Blue Dog’s popularity. I remember that year with a mixture of excitement and anxiety. Unlike the early years when people walked into the gallery with the question “What’s with this blue dog?,” after Absolut Rodrigue they announced, “I’ve seen this dog!” Or more often some version of, “Oh my gosh; this is it, the real thing!”

Local people in New Orleans and Carmel, California were accustomed for some time to the paintings by this point. I believe that many of them think that the paintings and prints are everywhere. But, not so. The lessons George learned in selling his landscapes and Cajun paintings serve him well, and he’s often said that had he discovered the Blue Dog twenty years earlier he would have ruined it. Instead, he’s cautious and protective.

He avoids wholesaling, mass production, and products (other than books), so that the only place people find his work is in his own galleries in New Orleans and Carmel. This was long before his internet presence as well, so the galleries relied on foot traffic and the occasional news article to spread the word. When the Absolut Rodrigue ad hit full page everything from Vanity Fair to Newsweek to People Magazine, it had the same effect nationally that the window of Blue Dog paintings had locally that Super Bowl Sunday of 1990 in New Orleans. Just as people stopped dead in their tracks before the window, people tore the ads from magazines and taped them to their refrigerator or hung them on their dorm room wall.

Occasionally some skeptic gripes about George’s over-commercialization and ‘sell-out status,’ using the Absolut (and Xerox) campaign as an example. However, it’s important to note that George turns down countless offers for everything from t-shirts to umbrellas, not to mention product endorsements, movies, and cartoons. Absolut’s promotion is famous as an art campaign.

Remember, George’s background at the Art Center College of Design in Los Angeles in the mid-1960s centered on the graphic arts and advertising design. The Absolut opportunity was exciting for him, as much from an art and advertising angle as it was for the exposure and name recognition. Absolut Vodka’s art campaign caused a sensation from the beginning, and George was in good company with several hundred other major American artists since that first Andy Warhol ad of 1985. (Xerox, and more importantly the opportunity to work with Young & Rubicam, is a similar story, featured in the post Blue Dog 2000).

In addition to Absolut Vodka, the years between 1993 and 1995 saw the publication of the book Blue Dog, museum exhibitions in Bloomington, Illinois, Pensacola, Florida, and Frankfurt, Munich, Greven, and Landshut, Germany, a SOHO exhibition in New York City, a new Rodrigue Gallery in Munich, Germany, a poster for the New Orleans Jazz and Heritage Festival, and George himself as King of the Washington Mardi Gras (hosted in Washington D.C. each year by the Louisiana delegation). 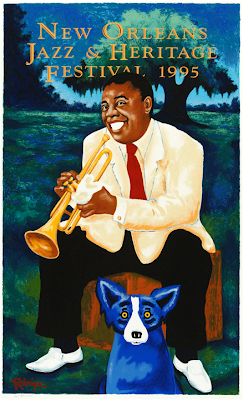 By the end of 1993, the galleries were hopping. I remember working seven days a week, opening the Carmel gallery some days at 7 AM just to catch up with the previous day’s paperwork, and because the gallery was exciting and full of people all of the time. It’s true; I even sold a painting early one morning to a jogger on his way down to the beach.

In one month we sold twenty-six paintings in Carmel. We looked like we’d gone out of business for several months after. Yet it was a fight to convince George’s agent to raise prices, and as a result every new piece sold within a day or two of arrival.

For George the success was bittersweet. Yes, the money was great – the best he’d ever known – but he was painting twenty hours a day, and in two years, up until late 1995, he completed more than five hundred paintings. (Staggering when one considers the 35-40 paintings per year he completes now). Also, as I’ve detailed before, he struggled during this period with the switch from oil to acrylic paint. He painted countless simple 9x12 and 11x14 canvases (sizes he abandoned permanently more than ten years ago) with single dogs and plain backgrounds. Bills mounted for complex personal legal issues, and relationships with his agent increasingly were strained. There was no time to think about meaning or direction, and it was seldom that George painted for himself. If ever the Blue Dog was a runaway train, this was the period.

I don’t mean to describe an atmosphere of consistent artistic doom and gloom. There were some real highlights in this period too, especially the large-scale pieces for the SOHO exhibition in 1994, with canvases eight-foot square and larger (two are pictured below). I think George would agree, however, that his overall output between late 1993 and 1995 was pressured, forced – similar to those family portraits and festival posters of the mid-late 1980s. 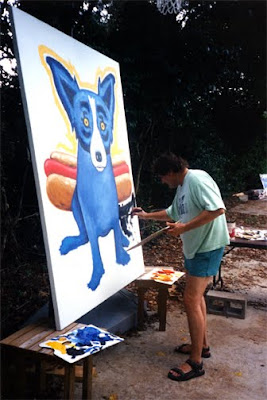 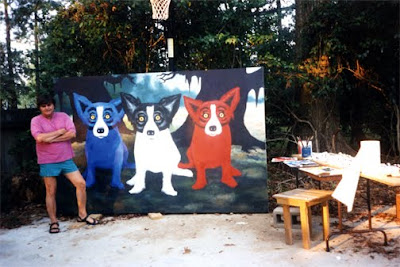 George and I had been dating for a while by this time, and I witnessed the ‘machine’ and worried. Despite his agent’s protests, I doubled the prices of every piece in the Carmel gallery overnight. We continued to sell, but fewer paintings, and yet we made more money. New Orleans was forced to follow. At last George slowed down, and by 1996 he created half as many paintings (still considerable), and by 1997 only a handful. From that point on, he had control again and painted slowly and deliberately, what and when he wanted. But these creative, inspired years are the next phase, and so I’ve gotten ahead of myself.

I’ve mentioned in previous blogs that the Blue Dog’s meaning continues to evolve. What began as the loup-garou and then the ghost of Tiffany melded into a signature of sorts during the mid-1990s. It lost any concrete definition in favor of pure phenomena, undefined, even though occasionally it referenced those early meanings and foreshadowed at least a few to come. 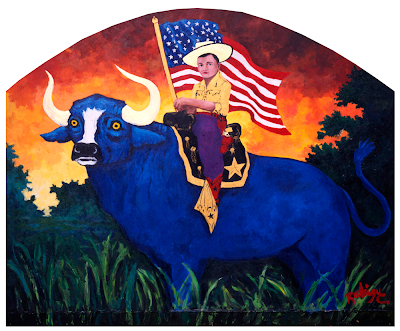 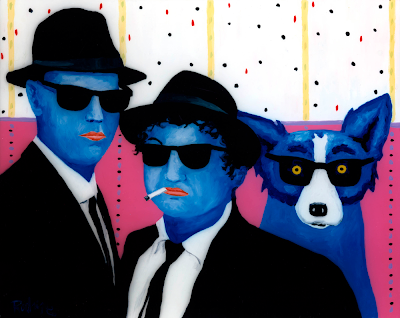 In the galleries the sales staff talked about the loup-garou and Tiffany. We were all pretty adept by this time, and we each discussed the paintings in the ways that they appealed to us personally. Not everyone knows the loup-garou, and not everyone has a dog that looks like the Blue Dog. More than anything we relied on the art itself, as opposed to some contrived ‘meaning’ to carry the weight. And it did, as has it always. It’s just like George used to say about his paintings of Cajun folk life. They rarely sold in Louisiana as one would expect; rather, they sold to people in other states around the country, states without Cajuns, because in the end it’s the art itself, how it’s painted, the style, the context, and the man behind it (I can say that as the wife) that makes it different than…well…some other dog painting.