George Rodrigue has epiphanies at the strangest times. He’s written movie scripts on airplane sick bags, designed cars in the middle of the night, and composed country western songs while changing light bulbs.

This truly came out of nowhere. We hadn’t discussed contemporary art that morning, nor have we been to a museum in several weeks; in fact, the last thing he said to me as he stepped into the shower was “Iron my pink shirt.”

He went on to explain that the mediums themselves are the biggest problem. In contemporary literature the thing itself is still a book, with pages and words, a beginning and an end, and a narrative of some sort. But in art, the medium is felt and fat (Beuys), bugs and cigarettes (Hirst), vacuum cleaners and sharks (Koons), or any number of installations from recent art fairs (my apologies for not recalling the artists), such as an empty white room, or a repeated “boom” in a tent, or a copy machine suspended from the ceiling, spitting out blank paper so that it falls on the visitor’s head one slow piece at a time. Paint on canvas is passé, and in the world of contemporary art, George Rodrigue is a dinosaur.

He goes further, commenting on borderline contemporary/modern artists: he gets Motherwell and his Elegies (pictured below), Indiana and his words and numbers, and Oldenburg and his giant safety pin. He appreciates the tension between positive and negative spaces, the idea of a word changing a meaning or the other way around (we have an entire set of Indiana’s Numbers circling the walls of our living room), and the process of taking something completely ordinary and increasing its size to an absurd scale, turning it into something utterly unordinary (and pretty cool, I might add). 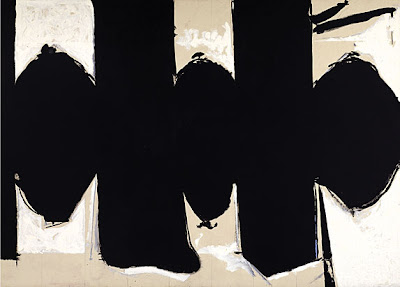 He gets these artists, but he doesn’t get others: Ruscha, Holzer, and Kruger with their single words and electronic or stenciled messages, or Kiki Smith with her animals and aborted babies and glass stars in a corner.

… All of whom I rather like, which makes for great discussions. And although he won’t admit it, the feminism probably irks him; remember, in many ways, but not all ways, George is old school…. 1950s New Iberia, Hank Williams, paint on canvas and all. Also, I think a lot of his artist-hierarchy has to do with which artist he discovered first, regardless of their true timing, after which he sees any others as mere copycats. Along these same lines, I find it ironic that George’s 40-foot installation on the New Orleans Sheraton includes the words, “Art is a timeless expression of a moment,” a statement with resonance if one considers Bruce Nauman’s neon sign from 1967: “The true artist helps the world by revealing mystic truths.” However, I don’t dare point that out.

“It boils down to a lack of originality,” he says. A walk through contemporary art galleries today always instigates a bombast:

“What if a person filled an entire book with nothing but the word sometimes? Do you think the public would go for that? Would the Pulitzer committee? Meanwhile, the art world goes crazy.”

He has a point.

He gets Rothko (my favorite) and his floating planes of color; he absolutely gets and seems most drawn to Pollock and the drip paintings; and he even gets Newman, although he finds the art simplistic and rather boring, since (to him) the reduction of shapes to one straight line is so obvious as to hardly be worthy of contemplation.

I had to laugh when we visited the Museum of Modern Art in New York a few weeks ago and as we stared at a large red Newman (1950, 18 feet, pictured below), I asked “Well?” To which George replied quite seriously, “He should have left that last line on the right off.”

We’re in Las Vegas this weekend, a place devoid of contemporary art as far as I can tell, unless one contemplates the entire strip as one big contrived installation, as though it’s some cosmic diorama, a snippet of the surreal. Everything is exaggerated here. When poised between the Eiffel Tower, the Statue of Liberty, and an erupting volcano, even the full moon seems like a stage set. 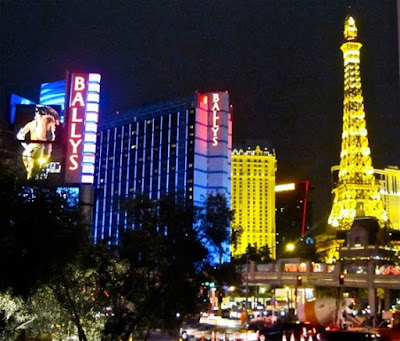 Las Vegas is a place where packs of wild girls in little, and I mean little, black dresses toss their ironed hair simultaneously while texting the guys they met last night in LIGHT (or MIST or FOG or DIRT or whatever), all while planning tomorrow’s coordinated wardrobe: skin-tight low rise jeans, cuffed high at the ankle to reveal stiletto booties in purple or snakeskin or both. (photos by George Rodrigue) 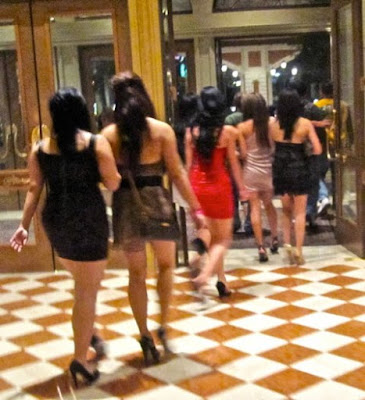 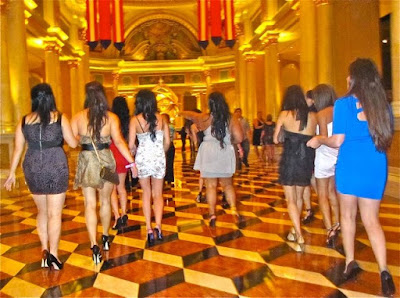 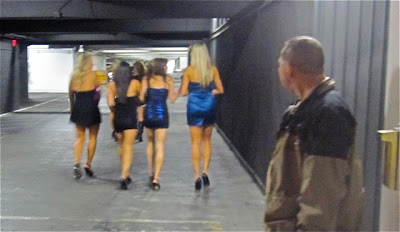 It’s a place where a cocktail purist like me replaces the olives in my occasional martini with even more indulgent blue cheese stuffed olives, because the plain ones seem too boring for this setting, too dull beneath the original Botero or Picasso or Renoir hanging above the bar in the artist-inspired restaurants. (It’s a place where we all become snobs in one form or another).

It’s a place to see Tom Jones or Cher, to remember when… and not feel guilty about it, and to wear an evening gown (or a sequined bikini – yes, we saw it with our own eyes) to dinner, because nostalgia, exaggeration, and bad taste are the norms here. 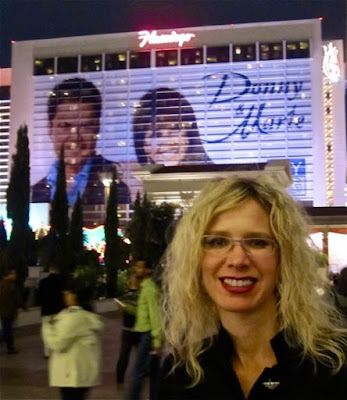 I’m going to have a party in Las Vegas one day and require all of the female guests to wear wedding gowns.

Yes, we’re in a strange diorama where anything goes, from the most charitable to the most selfish. Even the shallowest observations provide food for thought and probably subconsciously lead George’s mind into ‘thoughts on contemporary art while taking a shower.’

How appropriate that yesterday afternoon we stumbled on a contemporary architectural wonder currently under construction and housing a hospital specializing in Alzheimer’s and Parkinson’s treatments. The Cleveland Clinic Lou Ruvo Center for Brain Health was founded in Las Vegas by Larry Ruvo in memory of his father. Never one to think small, Ruvo hired architect Frank Gehry, most famous for the Guggenheim Museum in Bilbao, Spain, to design the building. It’s halfway through construction, and we lucked out with a tour that my college art history professors would have fainted over. 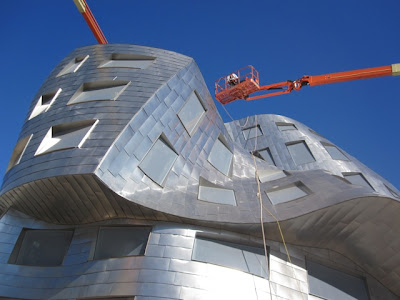 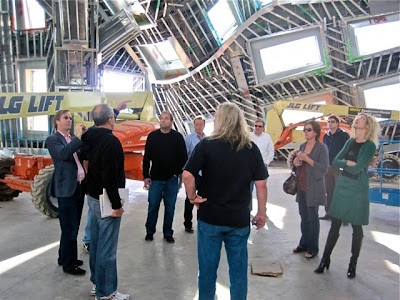 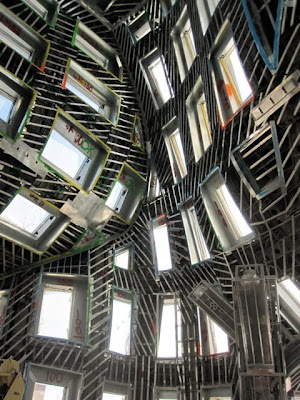 But the real reason we’re in Las Vegas is for Chef Emeril Lagasse’s Carnivale du Vin, a fundraiser benefiting his foundation and its many projects, including in New Orleans the Edible Schoolyard, Café Reconcile, St. Michael’s School and more. (below: with Alden and Emeril Lagasse) 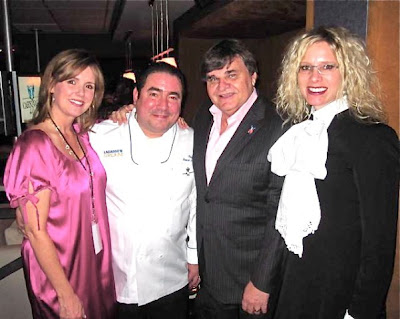 George is the official artist this year, the event’s fifth anniversary, meaning the room was filled with Blue Dog images alongside star chefs like Mario Batali and Charlie Trotter, musicians like the Neville Brothers and Sammy Hagar, and top winemakers and sports figures and business people, all here to support these worthwhile programs with contributions of their time, talents, and money. For George’s part, in addition to the Blue Dog image use, he donated the original painting Heat in the Kitchen, which brought $105,000 during the live auction for the Emeril Lagasse Foundation. 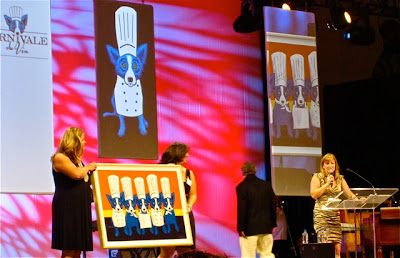 Here we are in this city of over-indulgence and waste, and yet we’re part of a non-profit machine that raised millions of dollars in one weekend for educational programs, scholarships, job training, and other opportunities in every community where Emeril operates. It was exciting to see this kind of enthusiasm and generosity for youth programs, particularly during these times of economic uncertainty, and also while we launch similar programs through the newly-founded George Rodrigue Foundation of the Arts. (below: Mario Batali at his station; Aaron Neville on stage) 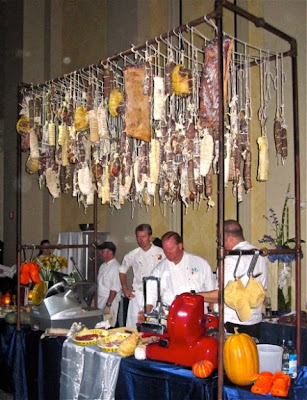 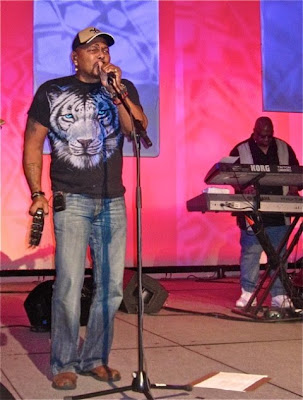 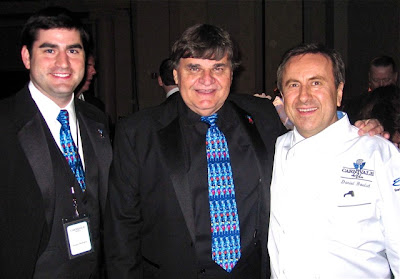 For some reason, in addition to contemporary art, outrageous fashion, and creative cuisine, this weekend in Sin City also lead George on a lengthy walk down memory lane (must have been the Donny and Marie sign). He talked about his years at Philmont Scout Ranch along with a poignant moment involving a broom at Camp Thistlethwaite, where he worked in the supply store. But now I’ve really digressed, so more on this in some Eagle Scout post down the road.

Oh, what the heck: in 1959, as he swept that last corner of dirt on that last day of the summer in his last year of camp, he had an epiphany: “I will never sweep another broom, and I will never work for someone else.”

And so he hasn’t.