After experimenting in art school with several mediums, including designer colors, pastel, water color, and chalk, George Rodrigue settled on oil paint to create his dark landscapes of Louisiana oak trees in 1969. In those days money was a real concern, and he was aware that each stroke of his brush equated to less paint in the tube. To make the paints last, he thinned them with turpentine, and as a result today many of those early landscapes are cracking. 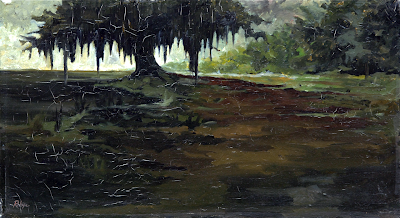 By the time he incorporated Cajun figures into his work, money was better, and George was careful not to overly thin the paints. He painted in oil for more than twenty years, eventually creating thick oil canvases, layered and piled up. These glistening, jewel-like works required months to dry, and their dark tones and subtle blending showed off best following several treatments (both initially and on-going) of spray varnish. 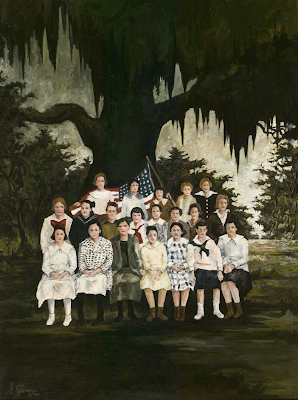 For years George painted in small, enclosed rooms, first in the back of an advertising agency owned by his friend Kenny Bowen in Lafayette, Louisiana, then in the attic of his Jefferson Street home, and finally in a side shed off of Landry’s Restaurant in Henderson, Louisiana. The unventilated spaces and the humid Louisiana air required air conditioning, which meant window units straining and humming through the hot summer months.

I think of him painting in this environment, with Roy Orbison or Hank Williams playing on his radio, his friends Dickie Hebert, Romain Fruge, or Bud Petro stopping by throughout the day with the latest gossip (in Dickie’s case), stories of the previous night’s female conquest (in Romain’s case), and a newly-perfected duck call (in Bud’s case). They’d drag him out for an oyster po’ boy or a bowl of gumbo, and he’d laugh and relax before returning to his studio and remaining at his easel oftentimes into the middle of the night. (below: George in his first office; Dickie helping out in the studio. Both early-mid 1970s) 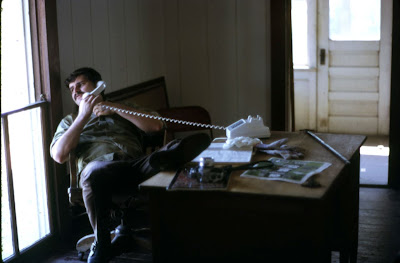 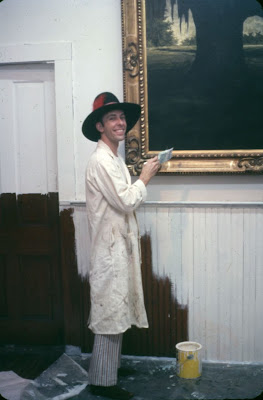 In addition to the studio time, those years included adventures of life on the road, traveling to meet collectors and sell paintings, usually with Bud or Romain along for the ride. But those stories are better saved for another post.

For this story, I picture George alone, inside a closed room, quiet in the late night, and surrounded by, engulfed in, living in, drowning in ….fumes.

He used heavy oil paints and turpentine. And each evening or early morning, before turning in, he sprayed his canvas, the air, and his lungs with varnish. It coated his insides and poisoned him, and in 1984 he was hospitalized for several months, weak, dizzy, and without the energy to paint or to play with his kids or even to think.

The doctors ran tests and sent him home, having no idea what caused the problem. He stopped painting for six months and felt better, and still no one, not even him, connected his illness to the toxins present in his everyday life.

He returned to his easel.

“Do you work around chemicals?”

They solved the mystery and diagnosed George with hepatitis. It was killing him. The cure? Abandon painting.

You can imagine this devastating news! Not only was painting his career path and the means of supporting his family, but also it was (and is) his life, no different than eating or sleeping. It’s true that George goes long stretches without painting, sometimes three or four months, but he knows it’s there, waiting, and he does the rest, the selling, the schmoozing, the books, the interviews, so that he can get back to his easel. Without that, the rest is for naught. Without that, I think he would sink into a depression; he would cease to function.

That’s what he faced, and he was scared.

He begged his doctor for an alternative. The only solution was to wear a gas mask hooked to a tank -----a prospect inhibiting for anyone, but impossible for this creative free spirit. Nevertheless, he painted under these difficult conditions for a number of years before it became unbearable.

George never accepts situations like this. He works out solutions to things the rest of us might find impossible. And in this case the answer, on the surface, was surprisingly simple: acrylics.

Acrylic paint, a water-based paint, was invented in the 1950s and became available in artist colors in the 1960s. It’s a fast-drying paint, completely different from oils, and the change for George would not be an easy one. As I mentioned above, oil paints take months to dry, and he could re-work areas and smooth things out and scrape and shift and blend and create new colors right on the canvas.

With acrylics, however, he had no opportunity to go back and make changes. An area was dry within minutes, and by the time he rolled his chair back and lowered his glasses to look from a distance, it was too late to manipulate that area of paint he’d applied only thirty minutes before. The process was a complete change for him. But there were no fumes, no dizziness, and no danger, and he was determined.

Coincidentally, it was about this time that George began in earnest the Blue Dog Series. Although the early loup-garou paintings were rooted in the bayou, and many of the Tiffany paintings of the early 1990s included elaborate settings and backgrounds, the series grew increasingly abstract. I’ll save an in-depth look at the paintings of the mid-1990s for another post, but it’s important to note here that George’s learning process is evident in these paintings. Most works from this period include very simple, flat backgrounds, not because that’s necessarily what he wanted (as he may decide with a Blue Dog painting today), but because he couldn’t figure out what else to do. He struggled with these paints, and he taught himself to approach his work in a completely new way. 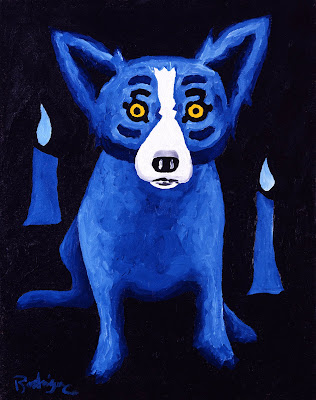 It took several years and probably a hundred or more paintings before he felt somewhat adjusted to this fast-drying paint. He complained repeatedly about the problems of working with it. And I panicked when on several occasions, in a fit of frustration after painting a solid, one-color background, he hauled his canvas outside, broke out his old paints, and painted the dog itself in oil. It wasn’t until maybe eight or ten years ago that I first heard him tell an interviewer that he likes and even sometimes prefers working in acrylics. By that time he’d been using them nearly ten years. (2003, 60x60, acrylic on canvas; 2006, 48x30, acrylic on canvas) 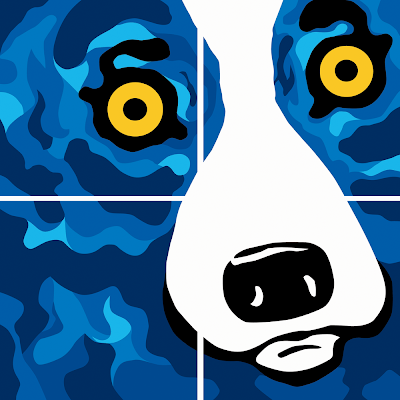 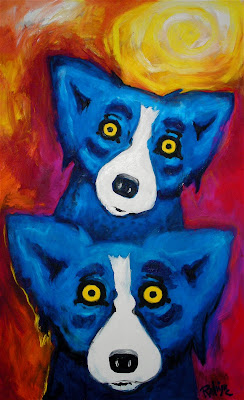 But again, the nature of the Blue Dog paintings and the direction he seemed to be taking them, lent itself to acrylic paint. (George says the Blue Dog 'saved his life.') The colors are brighter and more intense than oils. On occasion George paints right out of the tube, without blending. He produces clean lines without risk of smudging the paint he applied the hour before, now already dry. In some ways, his paintings of this period started to look more like his silkscreens ----an odd observation, since one would think it would be the other way around.

By the late 1990s George was comfortable with acrylics. His only regular complaint concerned the human figure. He claimed it was impossible to paint a woman with acrylics:

“A woman has to be soft. I have to be able to blend without producing thick layers. Otherwise she looks rough, like a man.”

As recently as 2004 when he painted Louisiana Governor Kathleen Blanco’s portrait, he thought he’d overcome that obstacle. However, after finishing the painting in acrylic, he was unhappy with her face, finding the build-up of paint too rough.

There was no way to begin the face again on that same canvas. After weeks of work, he started completely over on a new canvas and this time painted only her face in oil. 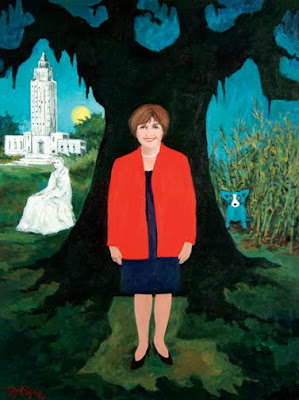 These challenges increased as George thought more about returning to figurative painting. He wasn’t interested in traditional Cajun genre scenes anymore, but he wanted to explore a new path, specifically the classic nude.

About this time he learned of a new paint, a water-based oil. There is no turpentine. There are no fumes. It still needs the spray varnish, but George’s long-time assistant Douglas Shiell takes on this task himself, wearing a mask and working outdoors.

Like a giddy kid, beginning in 2002 George explored the nude figure on canvas in a series of paintings and prints he eventually called Bodies. The first eight or ten paintings ---probably a year’s worth of work in 2002 ---ended up in the closet. It was a shocking reminder for me that George is still learning. One would think that by this time every stroke is perfect and every painting deserving of public display. But that’s not the case at all, at least not in George’s eyes.

What also surprised me was his patience. He wasn’t frustrated by inferior works but rather lined them up in the studio, studied them, shut them in the closet, and began again. Actually, he seemed obsessed, and he enjoyed it like a scientist discovering a new planet. 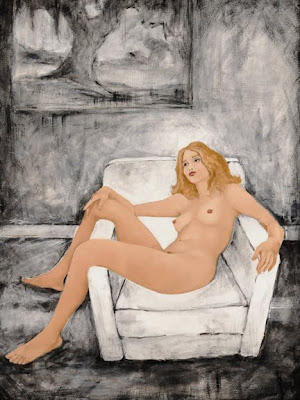 By 2005, after more than three years of work, he had five complete un-closeted Bodies paintings. He used these to create the final series of remastered digital prints, as explained in a later post.
Today George paints in both acrylic and oil (the new water-based oil, that is). He’s comfortable in both mediums, and he chooses the paint according to the painting. In some cases, a canvas may include both. (below: 2009, 36x48, oil on canvas; 2008, 30x30, acrylic on canvas) 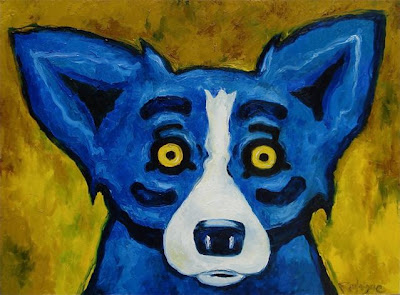 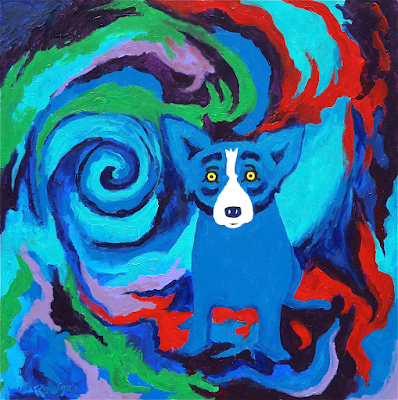 Forty years after those first turpentine-thinned, cracking oils, he squirts his paint onto his palette in large dollops. He paints with verve and without restrictions. His studio still bustles with visitors --- his sons Jacques and André, his football buddies Tony and Rich, and even Dickie, his oldest friend, who still drops in with the latest Cajun joke. George still paints through the night, and Elvis and Johnny Cash play on the radio. I guess the biggest change is in the past few months, when the music, the conversation, and even the paintbrush drops as a result of that current New Orleans delirium – Saints football.

Posted by Wendy Rodrigue Magnus at 9:26 AM