Maybe it’s Diana Krall singing “Have Yourself a Merry Little Christmas,” or maybe it’s the lights on our turquoise tree, or maybe it’s this stormy New Orleans afternoon, but something has made me sentimental in thinking back on what I like to call the ‘Blue Dog Man’ years, 1996-1999. It was during this time that George and I got married; we became full owners of the Rodrigue galleries; we began a prodigious relationship with Neiman Marcus; we toured with great success for the publisher Stewart, Tabori & Chang; and we took on so many projects not mentioned that I’ll be lucky if I get through the highlights here.

As you may recall from the post Blue Dog: Out of Control, the mid-1990s saw George Rodrigue painting around the clock, trying to please his fans, his agent, and his bill collectors. Somewhere along the way he decided it wasn’t fun anymore, and by 1996 he was shutting down. As tensions mounted with his agent, George became rebellious. He took the Blue Dog in new directions, hoping to spark some fun in his routine. 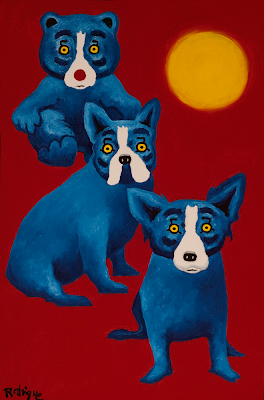 This included paintings and silkscreens of the Blue Dog in a bear suit, as well as its occasional transformation as Dudley, the Bull Dog. As usually happens with George and new ideas, many of those closest to him, namely his agent and friends, worried that he was messing with a good thing. But remember, as I’ve discussed in numerous posts both directly and indirectly, in order for George to be happy as an artist, his art must be exciting to him. It can’t be dictated by the whims of others, or else very quickly he becomes bored, and he risks turning his passion into ...well… work. (pictured, Dog in a Bear Suit 1997, original silkscreen edition of 75) 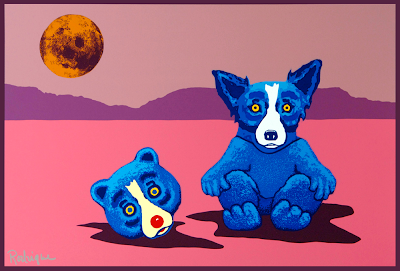 This is past our time period and a bit off subject, but I do find it ironic that in recent years George’s son Jacques has become “Bear Head.” 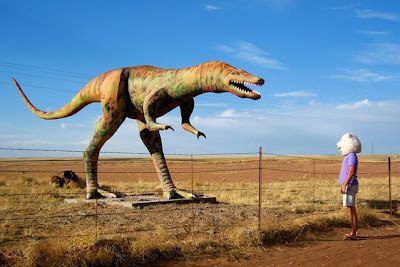 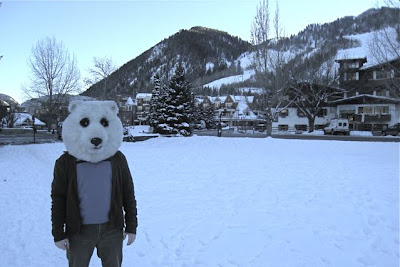 The highlight of 1996, without question, was Neiman Marcus’s commission. They asked George to create an image for the cover of their men’s catalogue, The Book, with the only requirement that he include their symbol, a butterfly, in the design. (pictured, Butterflies Are Free, 36x63 inches, acrylic on canvas). 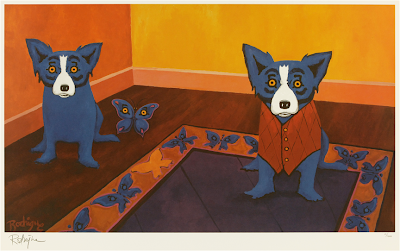 Although painting an original work, George was aware that the image ultimately would wrap around a book. He thought that something should happen as one turned the book over. In this case, a butterfly leaves the rug and flies alongside the Blue Dog. On the front cover we see a Blue Dog dressed as a man. The blank space above the dog’s head held the catalogue’s title.

The image was a tremendous success, and as a result George’s collaboration with Neiman Marcus continued with Hawaiian Blues (1998, 36x63, acrylic on canvas), also a catalogue cover, but this time celebrating the opening of their new store in Honolulu. 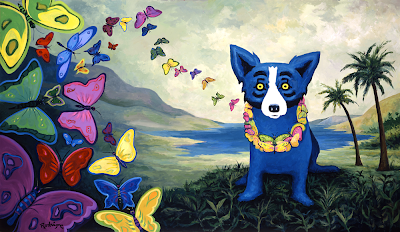 The butterflies amass on the back of the book (the left), travel across the spine, and form a lei around the dog’s neck. Here it’s easy to relate to George’s Cajun paintings if one thinks of the dog as being cut out and pasted onto the landscape of an old Hawaiian postcard just as the Cajuns were cut out and pasted onto Louisiana (see the post The Aioli Dinner and a Cajun Artist).

I watched George work on this piece for months, and I remember clearly his enjoying the puzzle of creating this composition and concept (similar to the recent painting Victory on Bayou St. John). He formed the sketch on a duplicate canvas, also size 36x63, and he pasted the butterflies onto the design. We kept George’s mother, in her 90s and living with us at the time, happily occupied and feeling needed for weeks by having her cut out butterflies from enlarged photocopies of clip art images. George stretched an identical canvas and copied his design in paint while referring to the mock-up across the room.

Normally George does not make prints of his paintings. (The prints are original silkscreens, different from the paintings, as described here). But in this case, as with the other Neiman Marcus prints, George made silkscreens of the painting and sold them in both his galleries and within the corresponding catalogue. The one thousand Hawaiian Blues prints sold out within just a few weeks, and to this day the painting is arguably George’s most famous from the Blue Dog Series.

Following the success of Hawaiian Blues, Neiman Marcus commissioned The Millennium (1999, 36x63, acrylic on canvas), George’s design for their January 2000 catalogue cover. As with the other paintings, they gave him carte blanche with regards to design and concept, provided he incorporate a butterfly in some way. Following The Millennium, George dissolved his relationship with Neiman Marcus, lest his Blue Dog become their symbol; however, the partnership was a positive one on every level, and the department store’s willingness to give him complete freedom in his designs allowed George the opportunity to re-examine meaning within his art.

By this time, people stopped him on the street and asked him about his paintings. He became a celebrity as ‘the artist who paints the Blue Dog.’ It might appear he gave in to this label, but I think rather he embraced it and saw it as a new direction, maybe even something empowering that allowed him to move forward in his art. Otherwise, why would he have surprised me with the image below as our wedding portrait (1997, 24x36)? He wasn’t laughing when he gave it to me. He was serious, and I don’t think it would have occurred to him to paint us together in any other way. 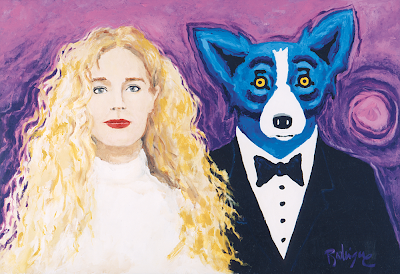 There were other exciting projects during these years as well, including the 1996 poster for the New Orleans Jazz and Heritage Festival featuring George’s good friend Pete Fountain; 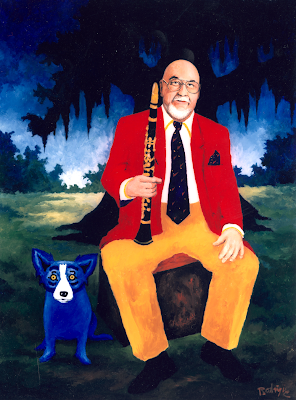 A commission by the Democratic National Committee to paint President Bill Clinton and Vice President Al Gore for the official poster commemorating the 53rd Presidential Inaugural, 1997; 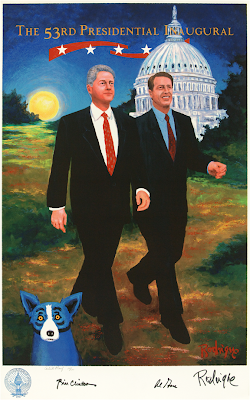 Luck Be a Lady (1999), a 15-foot painting celebrating the opening of Harrah’s Casino in New Orleans (hanging there today within the Besh Steakhouse); 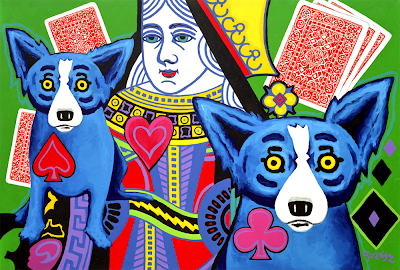 And the Chicago Cow Parade (1999), for which Neiman Marcus requested three Rodrigue cows to graze in their flower gardens on Michigan Avenue. The project unfortunately caused a copyright nightmare and lawsuit when the Cow Parade attorneys reproduced miniature versions of George’s cows for Hallmark stores across the country after he specifically denied them permission. Upon settling the dispute, we ended up with hundreds of these cows in our warehouse, and in typical Rodrigue-form, he turned them into an installation for the New Orleans Museum of Art exhibition in 2008 (pictured, one of the Chicago Cows in front of A Herd of Moos, a Wall of Blues, created from illegally reproduced mini-cows). 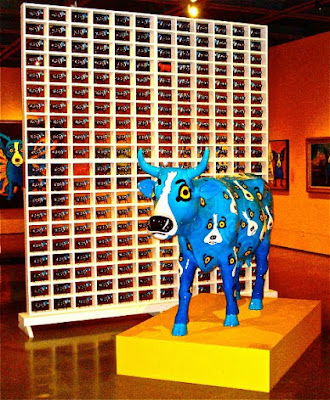 George donated two of the cows for auction benefiting the American Cancer Society, and the third tours assorted venues today, currently posing for pictures in the lobby of the New Orleans Sheraton Hotel.

So what does it mean to be the Blue Dog Man? The concept appealed to George, as evidenced not only by our wedding invitation, but also by exhibitions like “Blue Dog For President,” on view in 1996 in Union Station, Washington, D.C. (pictured, As Honest as the Day is Long, I Once Debated Nixon, and Secret Service Dog, all 1996) 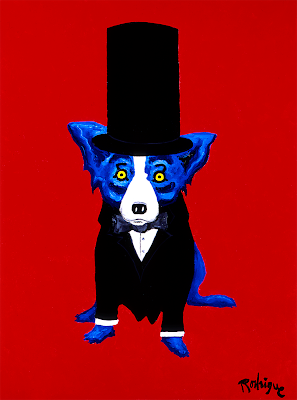 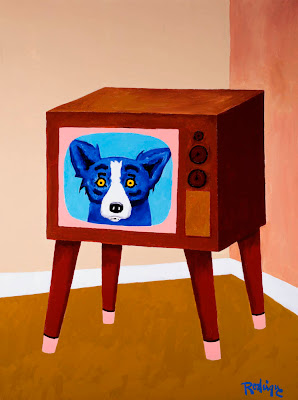 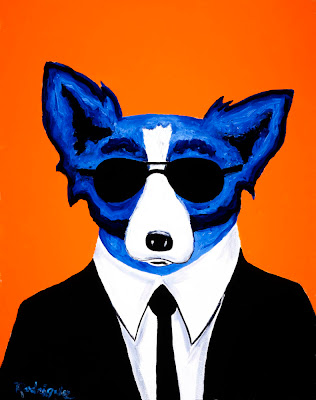 This Blue Dog Man direction propelled George forward in his thinking. By January 1998 he was free of his agent and open to his own whims, without dictation or pressure from anyone. During this period of the late 1990s, he and the Blue Dog became one and the same, on a journey together, and George recognized liberation. After twenty-five years of painting and commenting on the past with the Cajuns, he dared to use the Blue Dog to comment on today. He expressed opinions in his work, as well as satire and predictions and whimsy (and if you still have any doubt, see the painting No More Dukes in the post about Louisiana characters). Basically, any idea he had as a man, he could translate through the Blue Dog onto the canvas.

As I feared at the start of this story, there is just too much to cover in these years. I didn’t even get to the museum exhibitions such as the Gwinnett County Arts Museum in Atlanta, the excitement of 50-city national book tours such as the one for Blue Dog Man, or festival posters and fundraisers such as The Schaeffer Eye Center/Beam’s Crawfish Boil in Birmingham, the Shreveport Red River Revel, and the 50th Anniversary of the New Orleans Jazz Club. The Revel especially is important, not only because it supports youth art programs throughout North Louisiana (directly in line with the newly founded George Rodrigue Foundation of the Arts), but also because it’s the first place we tried our public presentations, where George paints in front of an audience as I narrate his story, something we’ve done countless times since for schools, museums, and on book tour.

These festivals and tours were the beginning of our ‘partnership,’ if you will, something other than husband and wife, friendship, or business, but rather a precursor to Musings of an Artist’s Wife. (for more on this, see the post Lectures and Painting Demos)

My mother used to say (and my sister will attest) that I never have had trouble talking. As I’ve gotten older, I try to be a better listener than speaker, but when it comes to George, sentiment gets the better of me, and I easily fill whatever time I’m allotted, whether twenty minutes or three hours, with stories about this interesting person, this Blue Dog Man. People ask me, aren’t you nervous? How are you so prepared? And I respond every time with the same honest (albeit sappy) answer:

“It is easy to speak about someone you love.”