Jimmy Domengeaux, George Rodrigue, and a Few Other Louisiana Characters

I assume other states have characters too, but between Governors Huey and Earl Long, singer and trumpet player Louis Prima, Coach Raymond Blanco, the French Quarter’s Ruthie the Duck Lady, Mr. Possum with his vegetable truck, and George’s Uncle Albert (and for that matter, my Uncle Jack) just to name a few, we are inundated. Heck, we elect them, whether famous or infamous, into office on a regular basis.

And maybe on some level (at least in hindsight) that’s a good thing. This is a very interesting place. Just yesterday in the news we learned that our former Governor Edwin Edwards’ biography (on shelves December 14th) was edited down from 1800 to 640 pages, and of course the story continues, since 2011 marks the end of his ten- year prison term. (pictured, Rodrigue's portrait of Edwards, 1983) 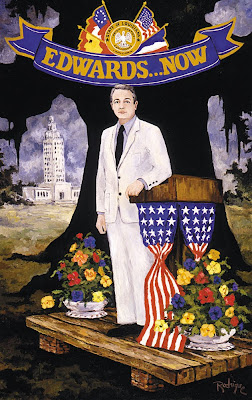 Our former Governor Jimmie Davis (1899-2000) wrote “You Are My Sunshine,” recorded first in 1939 and then hundreds more times and in dozens of languages over the years. George tells a great story about when Davis was inducted into Louisiana Public Broadcasting’s Louisiana Legends with a ceremony in 1990. At age 91 he shuffled onto the stage to accept his award, only to return an hour later and introduce his band. George said he stood up straight with bright eyes and a strong voice and had his audience on its feet, everyone dancing and laughing and young again, as they sang along, “You make me happy when skies are grey…” (pictured, Louisiana Legends painted by Rodrigue in 1990 and 1991. Top: Ron Guidry, Ernest Gaines, Gene Callahan, Jimmie Davis, Russell Long, Justin Wilson. Bottom: George Rodrigue, Dr. Michael E. Debakey, Al Hirt, General Robert H. Barrow, USMC, Bob Petit) 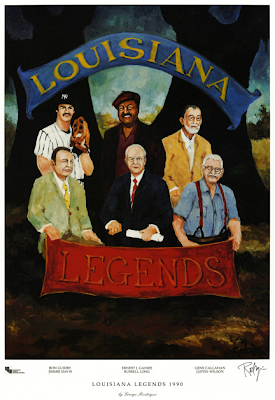 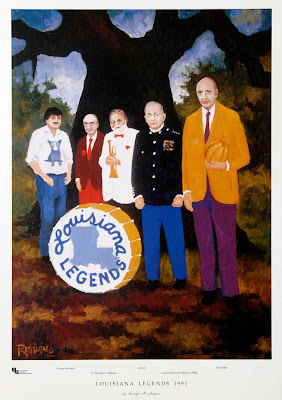 Unfortunately I can’t touch on the Long Brothers here, because George’s portraits of them and the stories surrounding those paintings are too …well… long. They are two of my favorite characters, and I know I’m not alone in that assessment, so I’ll post this story in my next blog, Portraits: The Kingfish and Uncle Earl.

My familiarity with many of these characters comes from local tales and especially George’s recollections. But I have been around long enough to witness a few of their defining moments. Most notably, the day I moved to Carmel in 1991 I picked up a newspaper for my last puddle jump and opened it to the headlines, “The Crook, The Nazi, or the Guru: Who Will be Louisiana’s Next Governor?,” a race that also prompted the popular bumper sticker, “Vote for the Crook: It’s Important.” At the time Edwin Edwards was fighting charges of corruption; David Duke tried to justify his past post as Grand Wizard of the Ku Klux Klan; and Buddy Roemer snapped a rubber band worn on his wrist any time he had a negative thought. Incidentally, the newspaper I read on the plane that day was The Los Angeles Times. (pictured, 1996, 30x40, following David Duke's announcement of his campaign for the U.S. Senate) 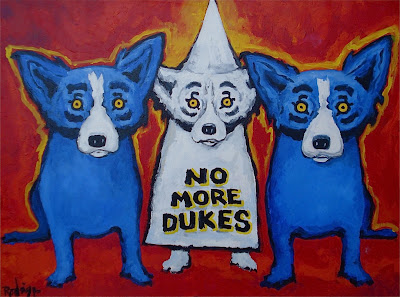 Some might say that George Rodrigue is a character too, with his thick Cajun accent and his khee-hee-hee laugh. He’s described often as both down to earth and full of life, and I’m always amazed at the number of people who tell me that they saw him drunk last Mardi Gras or one Galatoire’s Friday, when in fact he hasn’t had a drink in more than twenty years, ever since the varnish fumes affected his liver and nearly killed him (See the blog Oil Paint or Acrylic?). He’s sort of naturally high, I guess, always living in the moment, submerged in every experience. Not only has he retained the ability to see (from the blog Seeing is Understanding), but also he remembers everything, all the way back to age two! (I quiz him on this all of the time, because it’s so hard to believe, especially for someone like me who vaguely recalls a few playground incidents from age six).

Recently he’s talked a lot about an old friend, a character named Jimmy Domengeaux (1907-1988) from Lafayette, Louisiana. In 1968 attorney and former State Senator and U.S. Representative Domengeaux founded the Council for the Development of French in Louisiana, known as CODOFIL. Impressed with the initiative, Louisiana Governor John McKeithen pushed through a bill that granted the organization the necessary state credentials and then appointed Domengeaux its president.

By the way, the pronunciation according to George is closer to “DiMaggio,” as in the baseball player.

Domengeaux decided that in order to save the French culture in South Louisiana, he had to save the French language. He was determined to reintroduce French into the public schools. His ambitious goal and his bigger-than-life persona caught the attention of the statewide press, and he constantly was in the news. His idea involved bringing teachers from France and Canada to Louisiana. Not only did he come up with this plan, but also he convinced the French government to fund it! The first one hundred and fifty applicants had a choice of either two years in the French army or two years teaching school in the small town parishes of Louisiana. They lived in private homes and taught the proper French, as opposed to the Cajun dialect, a controversial decision that resulted in mixed and oftentimes negative press for Domengeaux.

Meanwhile, George Rodrigue returned from California and art school in 1967 determined to capture what he saw as his dying culture. He began with the oak trees, a strong symbol of South Louisiana and within four years developed a specific plan: to graphically interpret the Cajun culture on canvas (as described in detail in the blog The Aioli Dinner and a Cajun Artist).

So there’s an interesting parallel between these two men who both, with concerted effort beginning in 1971, hoped, indeed with some sense of desperation, to preserve either through art or language their unique and local heritage, the Cajun culture.

George first met Jimmy Domengeaux through Terry Theriot, an attorney working with Domengeaux in Lafayette during this time. George describes him as sarcastic, flamboyant, and even crude. They hit it off immediately. From the beginning Domengeaux liked George’s paintings because they represented Louisiana’s bygone era, the very thing Domengeaux hoped to save through CODOFIL. George recalls their first meeting when Domengeaux commented that his landscapes reminded him of paintings by Louisiana artist William Henry Buck (1840-1888), several of which Domengeaux hung in his collection.

Coincidentally both George Rodrigue and Jimmy Domengeaux also were drawn together by the press. George was getting nearly as much attention locally and statewide for his Cajun paintings as Domengeaux received for CODOFIL. Oftentimes they appeared in the paper on the same day. (pictured, Rodrigue and Domengeaux with Rodrigue's Broussard's Barber Shop, 1971, 30x40) 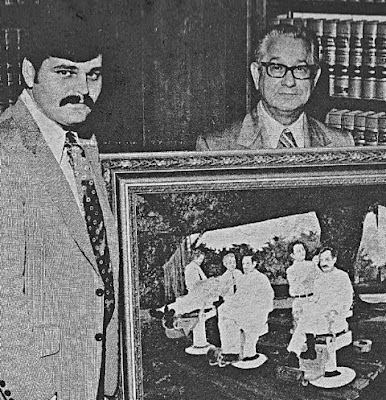 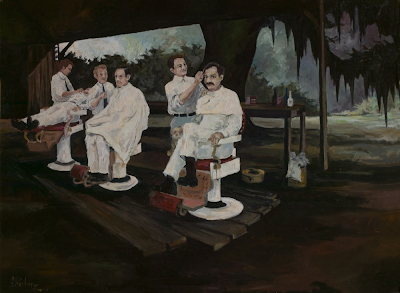 They became very good friends. In fact, at Domengeaux’s first statewide CODOFIL meeting held in Nachitoches, Louisiana, he invited George to show his paintings to the French and Canadian dignitaries in attendance. The exhibit of twenty paintings lasted three days. Because George was the only artist invited to participate, his artwork received as much attention as the cause itself in the papers, with photos of the 27-year old Rodrigue with the Consul General of France and the Canadian Prime Minister, as well as other local and state dignitaries. In fact, Domengeaux himself often sought photos with George, certain that the connection helped to further CODOFIL’s mission.

I did describe Domengeaux as ‘crude,’ right? I hardly believe I’m repeating this, but due to George’s amazing memory I do have a few wilder tidbits to share. George says Domengeaux routinely leaned to the side and broke wind as he sat at his desk during meetings, never uttering a word, but just rolling his eyes and grinning. And once he hollered at George across a hotel lobby, “Damn, Rodrigue, if you got any more public relations you’d be a whore!”

But rooted in the fun was a serious mission by two men who loved their state, their culture, and their roots. They could talk each other into almost anything that involved furthering their ambitious agenda to preserve their Cajun heritage. With Domengeaux’s help George had shows in Lafayette for French artists Valadier, Surrier, and Brenot, presenting them with keys to the city and exposing the local population to these French masters. (pictured, artists Valadier, Madame Surrier, Surrier, and Rodrigue; a Valadier painting leans on the floor and a Surrier hangs on the wall) 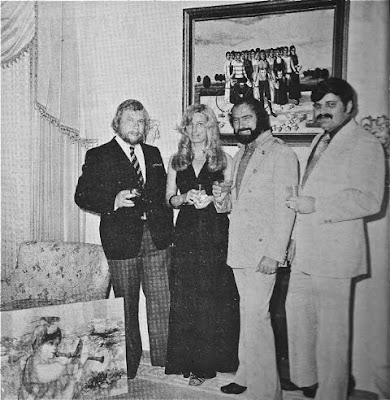 In addition, Domengeaux arranged for the state of Louisiana to commission a painting from George to be presented to the President of France, Valery Giscard d'Estaing (pictured below; also see the blog Two Publishing Stories: The Cajuns and Blue Dog)

Domengeaux's fame was so significant that in France people thought he was the President of Louisiana. According to George, he had more clout than Governor Edwin Edwards. He got in trouble with the State Department, in fact, for cutting a deal with a foreign government, but somehow Domengeaux charmed his way out of the mess and got what he wanted.

In addition, George's first trip ever to France was on a junket sponsored by CODOFIL. While there he entered his paintings The Class and Jolie Blonde in the 1974 Le Salon in Paris. Upon his return home, he learned that he won an honorable mention in the legendary and prestigious competition for his 1974 painting Jolie Blonde (detailed in its own blog entry here.) 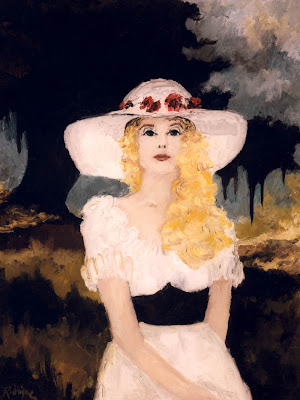 This recognition furthered his resolve to paint his culture, and it strengthened the bond with his friend Domengeaux, a true Louisiana character who supported and shared his goals throughout.

Originally I was going to talk about Domengeaux’s archrival, Dudley LeBlanc, in this blog. However, I got carried away as usual and will have to save his story for another day, lest Cousin Dud not receive the attention his outrageous character deserves.