From Jolie Blonde to Bodies: Paintings of Women

According to local legend, in the 1920s a Cajun imprisoned in Port Arthur, Texas pined for his lost love, his beautiful blonde, his “Jolie Blonde,” and wrote a waltz from those feelings of longing. Over the years the song became for many the Cajun anthem based on a sort of modern day Evangeline, and Cajun men throughout Louisiana sang in French some version of...

You left me to go

To go with another than me

What hope and what future can I have?

On the internet there are other more credible versions of the history of this song, most notably its copyright origins with Cleoma Breaux (1906-1941), famous as an early performer with her husband Joe Falcon, and I encourage you to explore this history if you want facts over romance. However, I will touch on that story a bit by sharing that Cleoma was from a town of 15,000 people near Lafayette called Crowley, Louisiana (Rice Capitol of the World), a place famous not only for its charm, but also for growing some true Louisiana characters like brothers Edwin and Marion Edwards, Senator John Breaux, Judge Edmond Reggie (father-n-law to Ted Kennedy), and our long-time friend Billy Broadhurst. For some reason this small town with its motto “Where Life is Rice and Easy,” as well as its annual rice festival and its newly renovated opera house is an on-going source of Louisiana’s colorful history, right down to the most famous of Cajun songs. 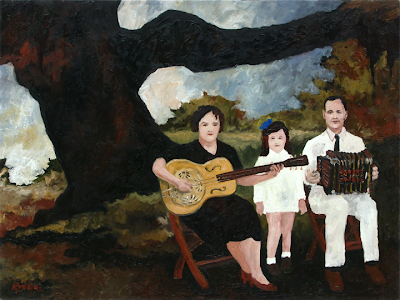 Ironically George Rodrigue, although unfamiliar with her connection to “Jolie Blonde,” did paint Cleoma Breaux and Joe Falcon in 1977. He recalled her as famous for accompanying her husband on a modern cowboy guitar, an unusual instrument for an early Cajun band. The Breauxs played for years at Oneziphore Guidry’s dance hall in Rayne, Louisiana (Frog Capitol of the World), and Joe Falcon (1900 – 1965) recorded “Allons a Lafayette” in 1928, making him the first Cajun music recording star. (pictured, Cajun music legend Doug Kershaw, Jolie's Louisiana Bistro owner Steve Santillo, George Rodrigue) 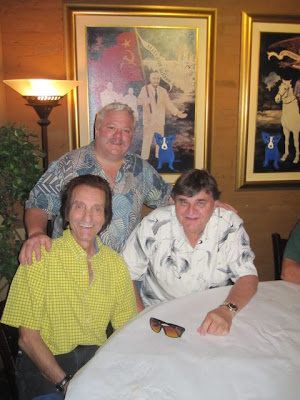 But for the purposes of this post and the story of Rodrigue’s Jolie Blonde paintings, what matters is the story George clung to as a young man (and indeed still does today); what matters is the romantic myth of this convict who wrote a waltz for the woman he loved, a faceless Cajun beauty waiting for Rodrigue to invent her image.

By 1974 George Rodrigue lived in Lafayette, Louisiana and painted Cajuns. It had been three years since his first painting with people, The Aioli Dinner, and his collectors expected complex works with large groups of people, rooted in old photographs and Cajun history. To paint these intricate and tight designs, he remained tense for hours, even days, steadying his hand with a mahlstick, a Knights of Columbus sword he pulled like Excalibur on a hot summer day from the mud of the Bayou Teche.

It was 3:00 AM one night, and he had painted nearly twenty hours to complete one of these complicated works for a client. His right hand ached, and his head swirled with thoughts of tiny faces and deliberate brushstrokes. He returned to his easel and in one hour, as he listened to Joel Sonnier and Doug Kershaw sing his favorites, without model, photograph, or mahlstick, he painted Jolie Blonde. She came out of his head and onto the canvas, quickly and with loose brushstrokes, painted entirely for himself, without a collector standing by. (1974, size 24x18) 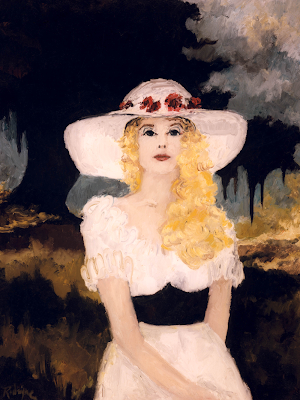 Ironically, the painting sold the next day, with four couples fighting over the purchase.

Rodrigue’s Jolie Blonde paintings, like his Evangelines, could fill an entire museum exhibition. He photographed dozens of models over the years and painted hundreds of versions. 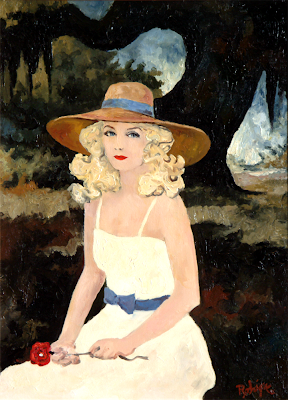 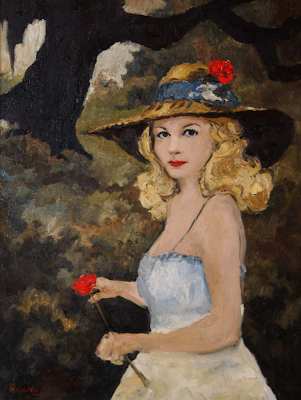 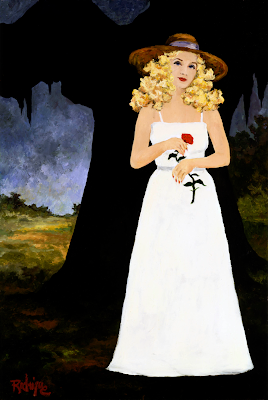 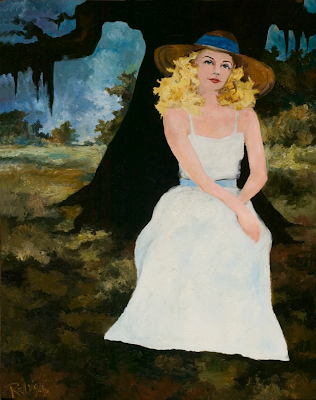 However, it is that first version, the one he invented from his dreams in 1974, that remains not only his most famous, but also the quintessential Cajun portrait of that culture's ‘beautiful blonde.’

Jolie Blonde is as much a repetitive subject for George as the Oak Tree and the Blue Dog. In fact, for many years he’s painted the three subjects together. (pictured, Another Dangerous Woman Crept Into My Life, 1991, 40x30; Sweet Dreams, 1991, 36x48) 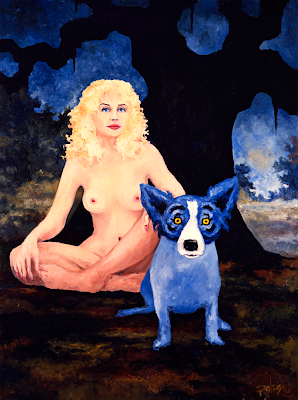 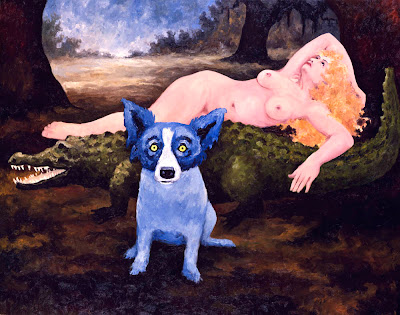 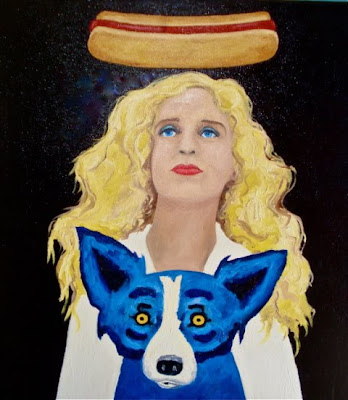 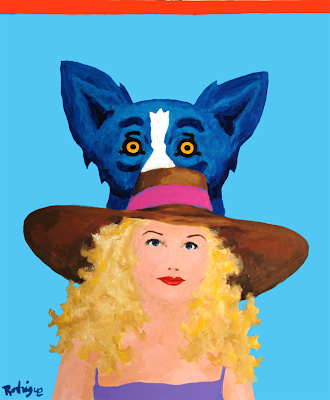 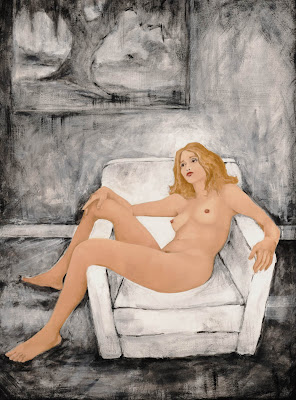 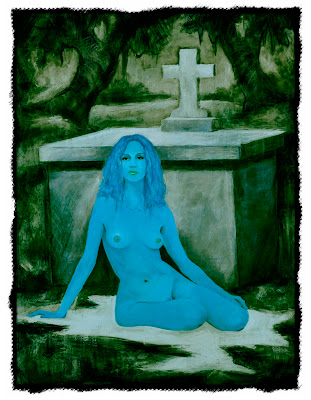 I am alarmed in these paintings at George's ability to mix her story with my vulnerability. This is where it’s important to remember that these are not portraits (particularly for you, the viewer), but rather means to an artistic end (see the post Portraits for more insight). Just like George, I can't help but view these paintings with an eye like no one else. In a strange way, I see them as though they are George himself --- or rather, paintings of his feelings, of his soul. 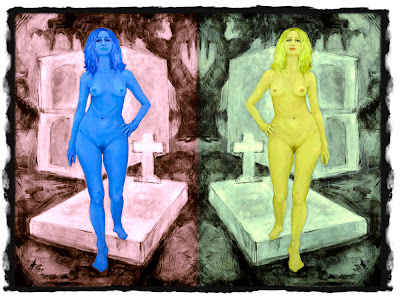 In addition to Bodies and other Jolie Blonde with Blue Dog paintings, George honors the legend with Jolie's Louisiana Bistro, a restaurant he opened with his sons André and Jacques and friend Steve Santillo in Lafayette last year. 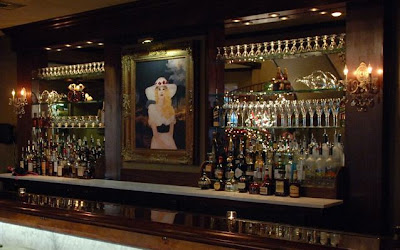 The restaurant features upscale New Orleans cuisine, as well as a large collection of Rodrigue’s Cajun paintings. It’s logo, as you may expect, is that first Jolie Blonde from 1974, a painting he created completely from his head in one hour in the middle of the night. That is his Jolie Blonde, the one he loves the best. The rest, no matter whom the models, are just attempts at recapturing that spontaneous, mysterious, and enchanting original. (pictured, Together Again, 2004) 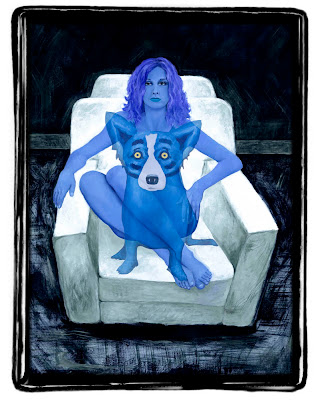 Or are they? He might argue that he’s moved on, and that the Jolie Blonde of thirty-five years ago has been replaced, both in his life and on his canvas. As much as I love the early painting, I like to think that this is true. For an artist so associated with repetitive imagery, when it comes to the classics, to the artwork that defines his career, he never repeats himself. He moves forward, always looking towards that next great masterpiece.