Portraits: The Kingfish and Uncle Earl

For years George tried to convince me that he is not a portrait painter. He explained that others paint with far more skill in interpreting likenesses, and that he used his models as just that, models. If he paints Jolie Blonde, in other words, it’s not about the person posing, but rather about the legend. When he painted his mother’s school class, it was not about her and her friends, but rather a depiction of a slice of time. 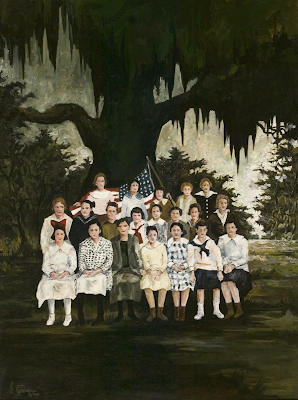 This despite the Aioli Dinner (1971) and its table of actual New Iberia Frenchmen, although interestingly enough George only in recent years referred to those faces as portraits, even after his laborious struggle to capture their likenesses (see The Aioli Dinner and a Cajun Artist). The milieu was more important than any individual part. 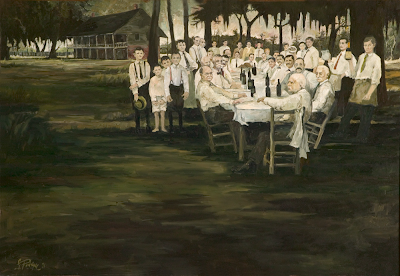 Even the paintings of his sons he described in terms of what the figures represent, as opposed to the personalities or portrayals of the boys he knows as André and Jacques (see the post The Rodrigue Brothers). The paintings reveal little about them (his sons) because George designed the works to enlighten his viewers about something else (the Cajuns). 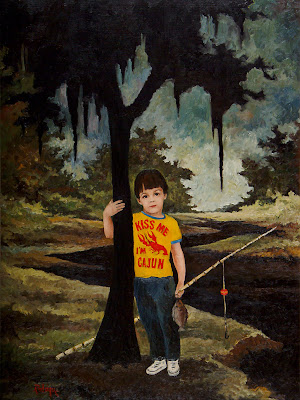 He refused to call himself a portrait artist even after painting three United States Presidents, five Louisiana Governors, three great jazz musicians for the New Orleans Jazz and Heritage Festival (actually four, if we count the non-Jazz Fest poster of Mahalia Jackson, pictured along with the other Rodrigue Jazz Fest posters here), countless paintings of well-known people such as Hank Williams, Elvis Presley, Chef Paul Prudhomme, Quarterback Drew Brees, Cajun and Zydeco musicians Clifton Chenier, the Romero Brothers, the Rayne-bo Ramblers, and well, you get the idea.

So when he said, “I’m not a portrait painter,” what was that? Was this some form of modesty? Or dare I say insecurity?

Neither are terms ever associated with George when it comes to his art. I think he firmly believed for years that his portraits just didn’t measure up. And because his goal was to capture the essence of a culture as opposed to a person, he perhaps dismissed his portraits, because for his purposes their individual effectiveness really didn’t matter.

Maybe on a smaller level the denial was rooted in resentment, stemming from what he saw as an albatross of family portrait commissions in the 1980s or even that first self-portrait of 1971 (see the post Early Oak Trees and a Regrettable Self-Portrait).

To the rest of us, there’s no denying that George has painted portraits for nearly forty years. Yet he himself only admitted it recently. It was spring 2008, and the New Orleans Museum of Art opened its exhibition Rodrigue’s Louisiana: Forty Years of Cajuns, Blue Dogs and Beyond Katrina, showcasing two hundred and sixty Rodrigue paintings and sculpture in their main galleries. The museum’s director John Bullard chose the categories, and the one he insisted on most was “Portraits.”

Once installed, “Portraits” comprised the largest section of the exhibition. There were more portraits than Oak Trees, Cajuns, Blue Dogs, Hurricanes, or Bodies, the show’s other categories. It never occurred to Bullard to group the Portraits with the Cajuns. And yet it never occurred to George not to do so.

George and I walked into the show and there was the word “Portraits,” stenciled in large letters on the wall. Without counting, I’m sure there were fifty or more paintings in that room, and yet George viewed them as though for the first time.

After walking the large area in silence, he paused in front of a painting at the far corner and said,

“This was my first real portrait, maybe the best one I’ve ever done.”

It was the first time I heard him refer to himself as having painted an effective portrait, or for that matter, a portrait at all. 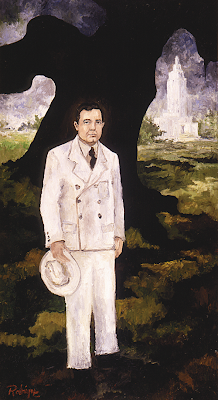 Painted in 1980 The Kingfish (oil on canvas, 60x36 inches) is George’s interpretation of Louisiana Governor and U.S. Senator Huey Long (1893-1935). As with his other Cajun paintings, he painted Long not in shadow as one would expect beneath a tree, but rather glowing with his culture as though cut out and pasted onto the dark trunk. His white clothing and barely discernible feet cause him to float within the composition, as though he is a ghost, timeless and historic.

The setting is Huey’s famous campaign speech. He stands beneath the Evangeline Oak in St. Martinville and says,

“Just as Evangeline cried for her Gabriel, Louisiana is crying for roads and schools and bridges.”

George uses the tree to frame not only Huey, but also a vision of the capitol building he would construct in 1932 in Baton Rouge. In addition, the apparition refers to Long’s assassination, occurring three years later in that very structure.

Soon after its completion the painting hung on exhibition in the Senate Rotunda in Washington, D.C. during a show of Louisiana artists. (pictured, George with Mrs. Long and former U.S. Senator Russell Long, son of Huey Long, from a newspaper article covering the show). 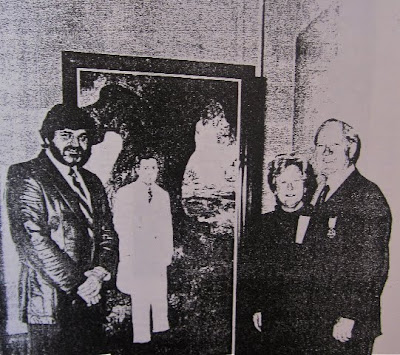 Again, when George painted The Kingfish he did not think of it as a portrait, but rather as an extension of his efforts to preserve his culture and record Louisiana history. It wasn’t until that day at NOMA, when he looked around the room and saw what he’d done that he dared to discuss his works as portraits.

After painting Huey Long it was natural that George follow with his brother, which is exactly what he did in 1989. Uncle Earl (oil on canvas, 60x36 inches) depicts Louisiana Governor Earl K. Long (1895-1960). 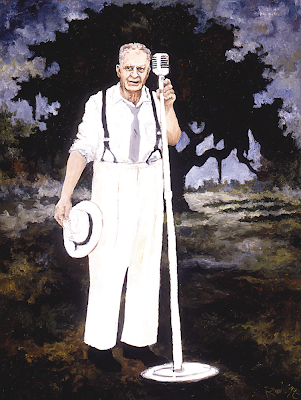 As with Huey, George paints Earl on the campaign trail, this time in North Louisiana where he drove door to door in his white Cadillac (like driving around in one’s living room, I’ve often thought), purchasing vegetables from farmers in one parish and distributing the food to working people in the next. He too is framed by the oak tree, but instead of the capitol building, George painted pea patches, shown in three rows to Earl's left. At the NOMA show I got a real kick out of hearing George talk about this painting:

“There he is, Crazy Earl, screaming into the microphone.”

I also noticed during the NOMA exhibition that whereas Huey is George’s favorite, Earl belongs to the people. They love this painting, and among the public it is considered one of his best.

Note: These blog posts are not meant to be history lessons. They’re about the paintings and the artist behind them. For a great read on Huey Long, thanks to Hollywood we all know about his autobiography Every Man a King, as well as Robert Penn Warren’s All the King’s Men. To learn more about Earl Long, at a friend’s suggestion I recently purchased Socks on a Rooster by Richard B. McCaughan and The Earl of Louisiana by A.J. Liebling.

So now, according to the painter himself, George Rodrigue is a portrait artist! In addition to the Longs, he painted Louisiana Governors Edwin Edwards, Kathleen Blanco, and Bobby Jindal. 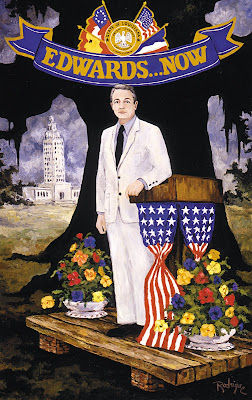 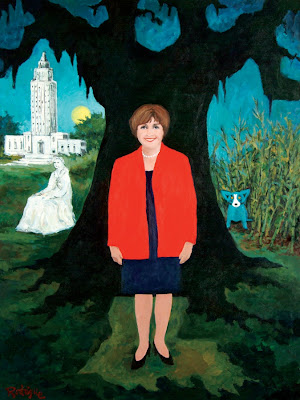 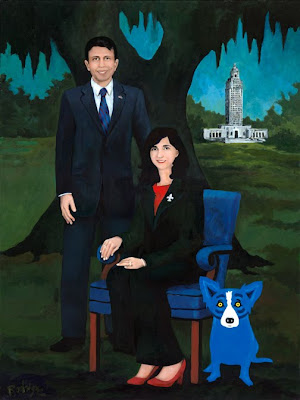 In 2009 Rodrigue tackled perhaps his most important portrait work to date, an historical painting of President Eisenhower and Andrew Higgins for the National World War II Museum. (See the full story here). 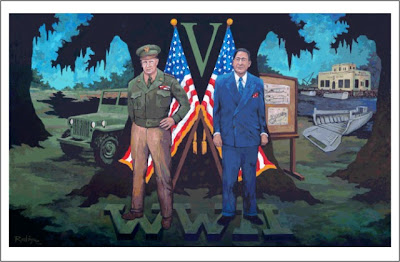 And yet, even though he now admits to painting portraits, that does not change the intent of either his earlier paintings of individual Cajuns or his more recent figurative works. He still uses models to express a comprehensive idea separate and apart from the person posing. There are distinctions, and they’re pretty obvious once one understands George’s concepts.

For example, although he’s painted from photographs of me several times, as with his sons he never, with the possible exception of our wedding invitation (featured in the next post, Blue Dog Man), approached the paintings as portraits.

With regards to my face and person this remains true today, and my likeness in series such as Jolie Blonde and Bodies, for example, is merely a means to an artistic end that has nothing to do with capturing my portrait or anything about me personally.

And yet when it comes to the Long Brothers, after more than twenty years of denial, George himself admits that these larger-than-life Louisiana characters overtook his intention probably from the moment he applied the last brushstroke to each one’s unmistakable and unique visage. 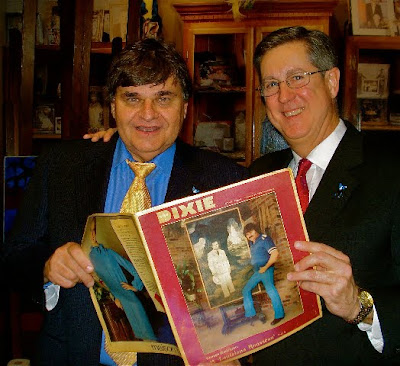 pictured above: George Rodrigue with Clancy DuBos at NOMA 2008, with the article Clancy wrote for Dixie, the Times-Picayune’s Weekly Paper, on November 23rd, 1980. This was George’s first major press in New Orleans

Posted by Wendy Rodrigue Magnus at 11:38 AM