George Rodrigue completed the Xerox Collection in early 2001. He spent the next several months building his studio in Carmel, California, and by that summer we were settled in Carmel, remaining there most of the next two years.

Spurred on by the excitement over his new studio, he painted ‘round the clock, and I watched with interest as for the first time in several years (consider Absolut, Neiman Marcus, Jazz Fest, and Xerox), he approached his canvas without anyone’s expectations but his own. To my surprise, he shifted from the strong imagery of the Xerox paintings to the abstract.

I remember thinking that he must want to explode and break loose after these series of tight, controlled paintings; but instead his work became tighter and more controlled. He abandoned the background imagery and superficial meanings (i.e., “A Faster Breed,” “Family Business,” “PC Blues”) in favor of patterns and color exercises and abstract concepts. (pictured, Consequences and Round-a-bout, both 2002 acrylic on canvas 46 inch diameter) 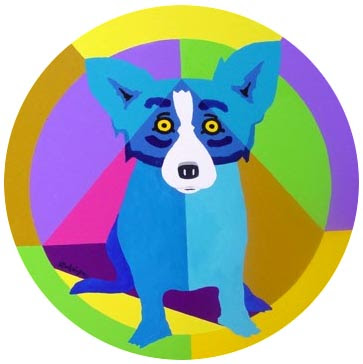 Don’t get me wrong: the Xerox paintings were not concessions. They are typical of Rodrigue’s purposeful designs. As with the Cajun paintings, each element is locked in, unable to move without destroying the composition. And yet, George longed for something explicit, something that practically screamed what was going on in his head. In his mind the Blue Dog, although rooted in the loup-garou and Tiffany (as described in the blogs Blue Dog: In the Beginning and Blue Dog: The Ghost of Tiffany) is not a dog at all, but rather a strong and interesting shape --- a shape that, unlike a circle or square, he invented. In the paintings following Xerox, George embraced this shape like never before. (pictured, Everywhere 2003 acrylic on canvas 30x30 inches) 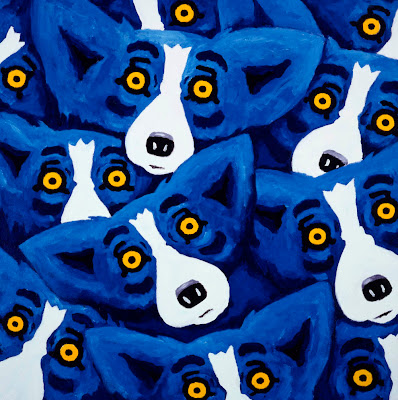 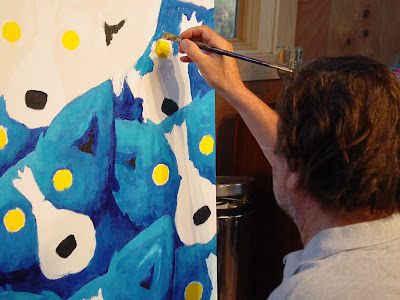 The first painting in this new series (Puzzle of Life, 2001, 46 inch diameter, pictured on his easel below, as it looked the morning he finished it) is an obvious artistic puzzle. George has said all along that his paintings are puzzles, and that once he finds the solution, the painting is finished. But for the rest of us, as we look at his canvases of Cajun dinners and musicians or of Blue Dogs among the oaks and tombs and other elements, it’s hard to see past the subject matter. The complexity eludes the average viewer. 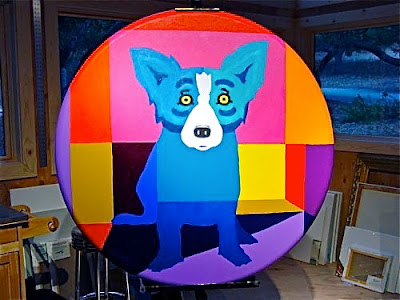 In this new direction, the canvas shape becomes important, and the patterns within the painting play off the edges of this round format. But don’t think for one second that George loses his sense of humor or his playfulness in these contemplative designs. His concepts are clever, witty, and unpredictable. (pictured, Wheel of Fortune, Roulette, and ‘Round the Mulberry Bush, each fitted with a motor and a remote control, so that the paintings rotate with the push of a button). 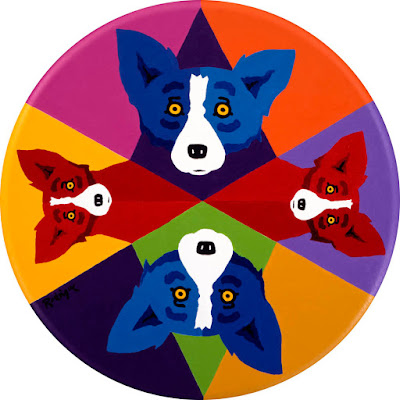 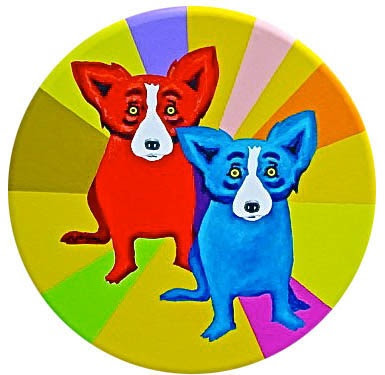 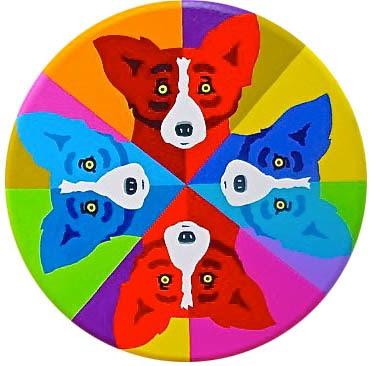 And don’t think he lost his roots and abandoned Louisiana or the Cajuns or the loup-garou. It’s just that the path is a bit ambiguous, even deceiving. It always has been in George’s art, and that is a major point in these works. Things are not what they seem. He may not see the dog shape as that animal we know as a dog, but he never saw the oak tree as a trunk and branches either. In his head, beyond the symbolism and nostalgia, it is all about creating something interesting to the eye. (pictured, Evermore, 24x24 inches, with 4 inch sides) 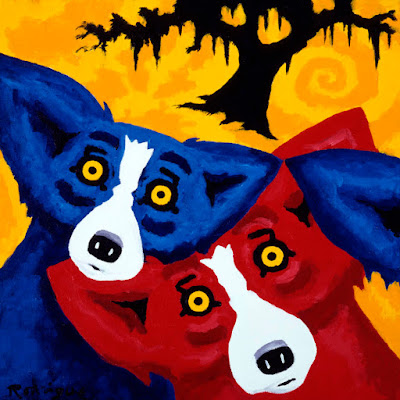 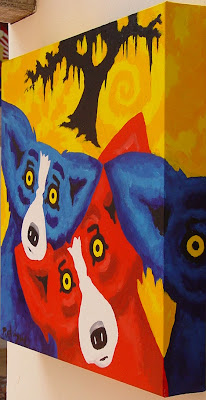 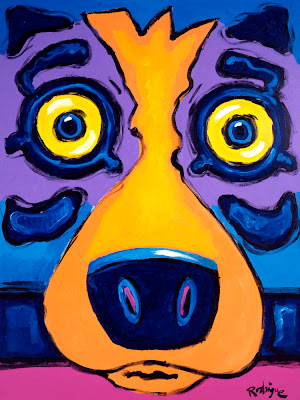 George’s most significant piece during this period, and indeed a defining work in his career (to my mind, the equivalent of the Aioli Dinner, but in the Blue Dog Series) is Dependence (2002-2003, 60x60 inches, formed by four canvases, each 30x30 inches) 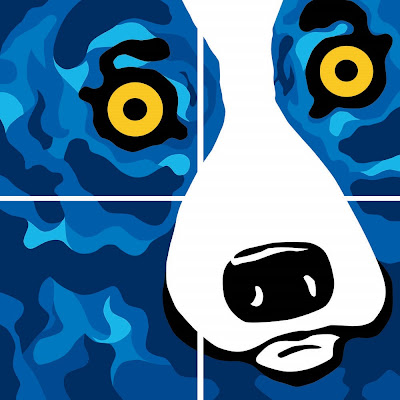 Each of the four panels is dependent on the others to create the whole, and yet alone they hold interesting shapes, woven together in patterned shades of blue. The distinct but related colors lie within the same hard edges George retained from art school ----the same ones that define his oak trees. He worked on this piece for weeks, often inverting the panels or altering entire areas of patterns. In this painting, George is screaming at us. It is as if he says,

“Haven’t you seen all along that I’m an abstract artist?”

….an abstract artist, that is, who happens to paint something we recognize. 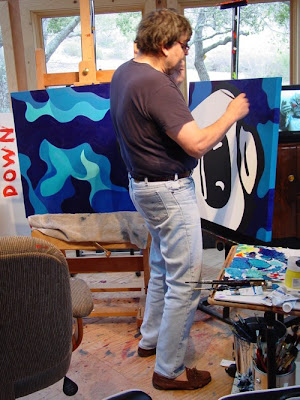 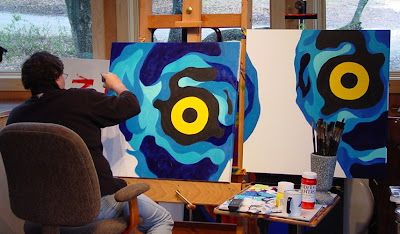 Interestingly enough, I was not far off when I predicted an explosion for George following the Xerox paintings. He just hadn’t reached that point yet, and he had to become even tighter and more controlled before he could let loose.

But it does happen.... all of a sudden, in one great burst overnight, and the resulting Hurricanes, a series of seventy frenzied, wholly abstract canvases, pushes ashore and onto his easel in a shocking change of direction.

Posted by Wendy Rodrigue Magnus at 6:12 AM