Hurricanes, A Series of Paintings

By late summer 2002 George Rodrigue and I lived most of the time in Carmel, California. We placed our house on the market in Lafayette, Louisiana, but still spent time there on occasion as we waited for a buyer. By coincidence, we were in Lafayette for Hurricane Lili.

I recall an argument with George about evacuation:

“What do you mean we’re not leaving?”

I, on the other hand, grew up on Okaloosa Island in Fort Walton Beach, Florida, and I weighed the importance of my life versus my marriage, as I decided whether or not to take Diana (our cat) and get out of town without my husband.

My mother grew up in New Orleans and recalled horror stories from Hurricanes Audrey and Betsy, and later the devastation caused by Camille in nearby Biloxi, Mississippi. As a result, my sister and I evacuated with her four or five times every summer throughout the 1970s and 1980s--- essentially, each time a hurricane entered the Gulf of Mexico --- the car packed with photo albums, the Persian carpet, three hamsters and two birds, all of which (except the animals), remained in the trunk from July through September.

Against my better judgment, I stayed. To console me, George took me to the garage and showed me his contraption (this is so typical of him). He hooked the car up to an external battery and installed a small television so that we’d receive local news updates after losing power. It took everything I had not to roll my eyes when the television stations, also without power, went off the air.

Today, after thirteen years of marriage, I know enough strategy to trick him into evacuating, but back then I was still a naïve bride!

Our friend Blake, who house-sat since our move to Carmel, stayed with us. Together we (George, Blake, Diana, and myself) watched wide-eyed as this storm moved into the area.

For some reason I took it for granted that hurricanes hit at night --- this unseen, noisy, powerful monster that leaves pandemonium in the morning light. But Lili struck in the middle of the day, and we stood in our kitchen bay window (like idiots) watching patio furniture fly down the street, sections of roofs tumble through the air like something out of The Wizard of Oz, and eighty foot trees bow low to the ground. At one point we lost Diana, and I ran upstairs without thinking, George screaming at me the whole time, for fear that the second floor was dangerous and may have broken windows or holes in the roof (now he panics), only to find Diana (obviously the brains in the family) curled into a small, shaking ball in our bathtub.

Back at the window, we stared mesmerized, frozen in fear, as the largest tree in our yard, an oak some fifty years old --- the same kind George has painted for years --- bent towards us. We watched the ground around its base as it heaved like some monster rising from the earth (an orc?). And in slow motion, the tree’s root system and a twenty-foot area of ground stretched towards the sky. The oak, as though lying down for a nap, moved towards the house ... and us.

It landed with an eerily silent crash (unheard over the roaring wind), its branches only a few feet from the kitchen window. As we stood unmoving and open-mouthed, Mother Nature, as though disappointed with our reaction, hurled an acorn into the window with a pop, sending Diana under the couch and the rest of us flying to the back of the room, jolted from our trance.

The next day, once the roads cleared enough to weave our car through the debris, downed trees, and power lines, George and I, both great admirers of lights and air conditioning, neither of which returned to our house for three weeks, drove to the nearest open airport (I think it was Baton Rouge) and flew to California.

Settled once again in la-la land (for Carmel really is like some form of Eden), George headed to the art supply store and returned to his easel that same night. Jet lag woke me extra early the following morning, around 4:00 a.m. I was not surprised to find George still in his studio, however the painting on his easel shocked me. (pictured, 36 inch diameter) 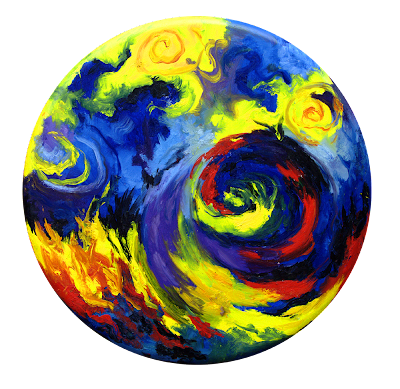 “What are you doing? What is that?”

“It’s a hurricane. It’s Lili,” he replied with a laugh, followed by that rare and revered question,

“What do you think?”

“I’m flabbergasted. I don’t know what to think. Are you painting in oil?”

If you read my previous post, Blue Dog: The Abstract Paintings, then you probably understand the extent of my shock. In recent years, George was painting tighter than ever. His paintings were controlled, specific, and orderly. They were like a woman without a hair out of place. All of a sudden, here was a rat’s nest. What’s more, he hadn’t painted in oil in years (see the post Oil Paint or Acrylic?). The blending, loose brushstrokes and raw emotion in this painting were like nothing I’d ever seen from him.

(pictured, Hildegard, 24x24, my favorite of the Hurricanes, and hanging today in my space ....my office.... in Carmel) 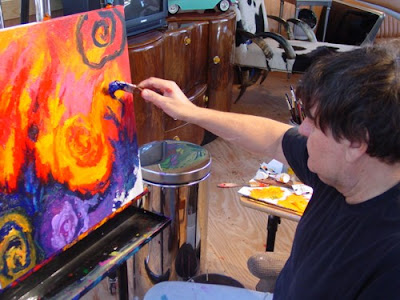 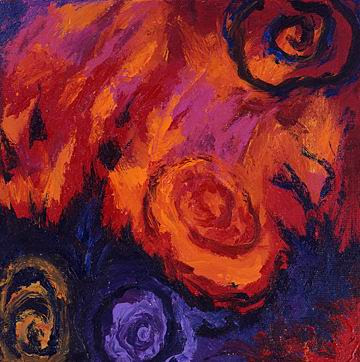 The paint, it turns out, is a new form of water-based oil paint, an invention that greatly reduces the fumes (and danger) that accompany turpentine. He picked up these paints and a few round canvases the day before, not telling me what he had in mind.

As I watched that morning, he began work on another canvas, this time a large rectangle. He painted freely, with no preconceived ideas of where he was going, nothing mapped out, and nothing designed. (pictured, Camille and Georges, each 36x63 inches, oil on canvas) 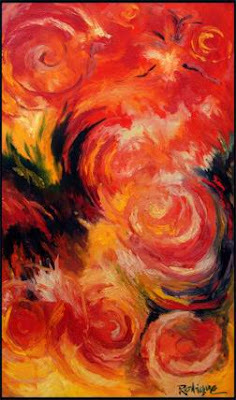 Far from the negative notions of destruction normally associated with these powerful storms,* these paintings are a tribute to nature’s awesome power. They are abstraction in its purest form. 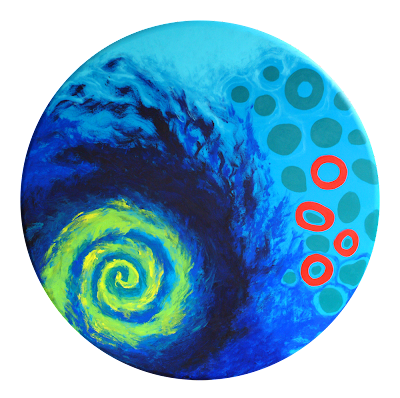 Obsessed, George painted seventy Hurricanes in a row over the next six to eight months, most on round canvases, working quickly and rarely pausing between paintings. (Ironically, he did pause for five weeks late December 2002 to complete the highly organized painting Dependence, almost as though the Hurricanes interrupted him before he could finish this defining piece). To reduce the indoor fumes, he nailed the paintings to the outside of our house, eventually using the ladder to stack them high, where they spent weeks drying in the sun (as we all know, ‘it never rains in California.’) (pictured, Frederic, 48 x48 and Haley, 46 inch diameter) 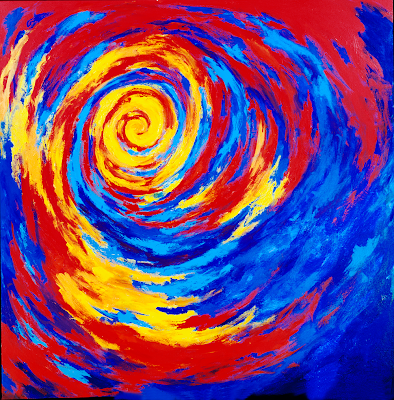 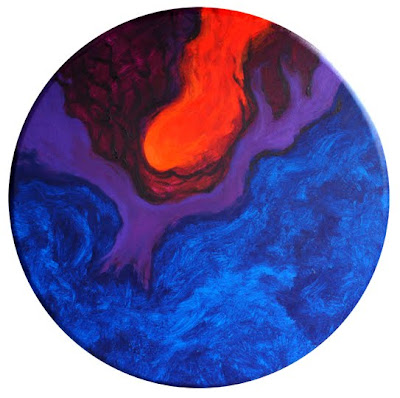 After seventy paintings, George moved on, ironically to his most controlled and complex series yet, with a return to the classic nude in Bodies.
Looking back on the Hurricanes, he describes the phenomenon today as something he ‘just had to get out of his system.’ We all know what that’s like, but most of us don’t have this lasting collection of evidence. 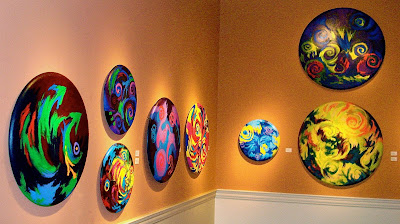 The series surprised not only me, but also our staff and George’s collectors. We had successful Hurricane exhibitions at both the New Orleans and Carmel galleries, but it wasn’t until the Rodrigue retrospective at the New Orleans Museum of Art in 2008 that the paintings attracted significant attention from the general public. The museum’s director, John Bullard, created a circular room and painted it black. He swirled the round canvases in a snake-like pattern from floor to ceiling, so that these images of color, form, and energy surrounded the visitors.

I watched people enter that room with the same open mouths that I recall from our oak tree experience during Hurricane Lili. For many viewers it was their favorite room in the exhibition, despite the fact that most people had never seen these works before. I recall the young children especially who, unable to read the word “Hurricanes” on the wall, looked around wide-eyed and whispered, 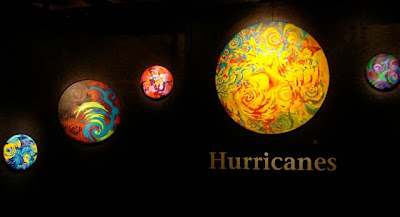 For a better understanding of this room, view NOMA’s virtual tour here.

Some describe the Hurricanes as explosions, as though George’s other paintings of Landscapes and Blue Dogs burst into a million pieces on his canvas. Indeed in some works, one finds hints of oak trees and dogs integrated within the chaos. 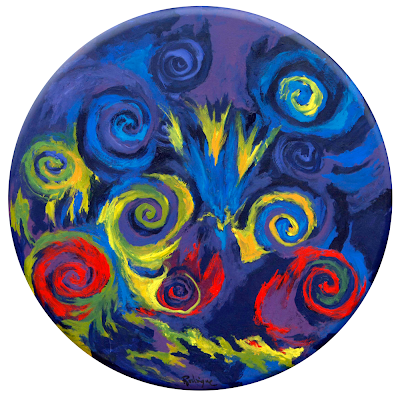 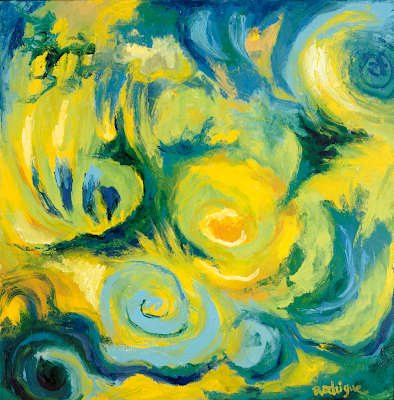 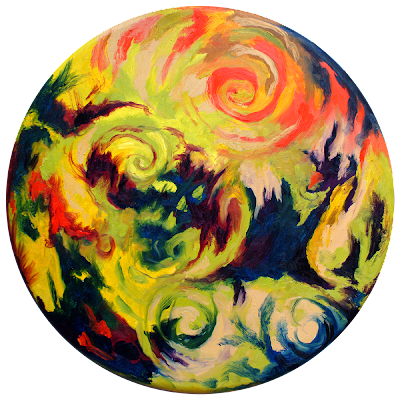 This becomes more evident as he finishes the series. He transitions from the erratic Hurricanes to the controlled Bodies with an interim mixture of swirls and dogs, causing some to wonder if he abandoned his hard edges and severe designs for good. (pictured, Genesis, 40x80 inches, 2 panels) 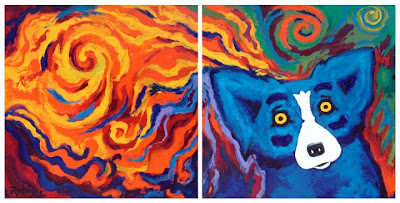 However, in summer 2003 he returned to the classical nude, taking everyone by surprise once again.

Everyone but me, that is…..

With the Hurricanes I learned my lesson, and I know that George is serious when he says, as he has many times over the years,

“I refuse to predict what I’m going to paint next.”

*Note the dates of George’s Hurricanes, and their lack of connection to Hurricane Katrina, which hit the Gulf Coast in 2005. His reaction to that storm is unrelated and disparate to these canvases. It was many months before he created anything following Katrina (other than prints to raise money for area relief). When he did return to his easel, unlike the series described above, his paintings are dark and fragmented. They reflect not a respect for nature, but rather confusion, anger, and depression --- those emotions that escaped no one in South Louisiana and surrounding areas, as we witnessed the widespread and seemingly endless suffering in our communities.