Who Dat! …. Plus Voodoo, Cow Heads, and DC Mardi Gras

I awoke at 5:30 this morning to the screams of “Who Dat!” hollered from our sidewalk as though I were Stella herself giving up on the half sleep that comes from tumultuous relationships and reignited passion.
I awoke in a city blissfully plagued with hangovers and swollen eyes and strained vocal chords. (Maybe you did too? Our New York and Irish friends called after the game to report their evening exercise ---- jumping around the living room, followed by sazeracs at the local pub). It’s “Who Dat” insanity, and since I was reminded in Washington D.C. this week that I shouldn’t assume that all the world knows these Louisiana peculiarities (everyone from our cab drivers, to the maitre de at the Old Ebbitt Grill to the director of the Hirshhorn asked me for help), here’s the real thing (I leave you with the fun of translating):

I had a ticket, but I gave it up. Sounds crazy to you, right? But not really. I went last week and am still high on the experience of hugging strangers, of screaming like life itself depended on stopping the other team at that third down, of gripping my seat (and my chest) until the bitter end, just terrified something would go wrong (“If only they can get ahead by five touchdowns; then we’ll be safe….”). Like last night, I found it impossible to eat or drink, as the knots in my stomach took over. It’s a game, and yet God’s loudspeaker might as well have just announced world peace. I’ve never seen this town (or any place) so happy. (pictured Gus Anderson, Dickie Hebert, Jacques Rodrigue, George Rodrigue, Wayne Fernandez) 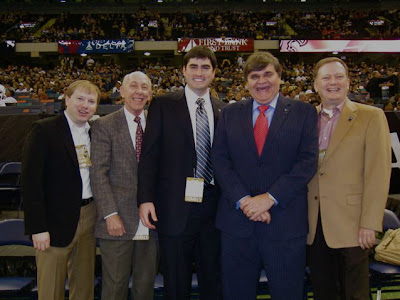 Douglas, the Rodrigue Gallery’s all-around take-care-of-everything person for the past twenty years went in my place, accompanying George as they high-fived police officers and hot dog vendors and the Governor himself. (pictured, Douglas Shiell and George Rodrigue in their seersucker suits, New Orleans, summer 2009) 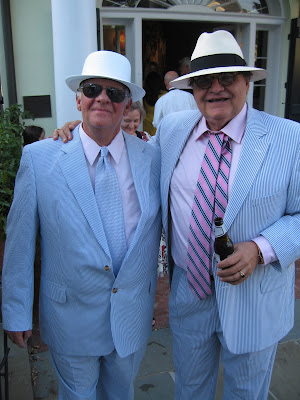 Following the game, as I sat on the couch with the phone stuck to my ear and the Kleenex box in my lap, George ran inside to recount every play for me as though I hadn’t seen a thing. When he realized I recorded it, he opened a beer and shouted at the television until the wee hours. It was just one of those nights. (pictured, Rodrigue with Drew Brees, 2008; raising money for the Brees Dream Foundation; Rodrigue's portrait of quarterback Drew Brees from 2007; Rodrigue with Brittany and Drew Brees, 2009) 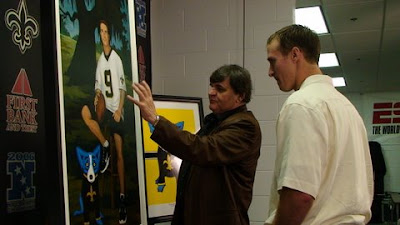 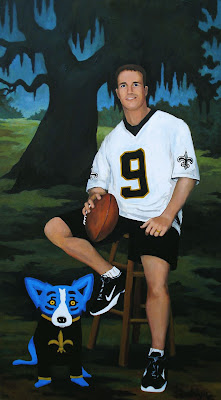 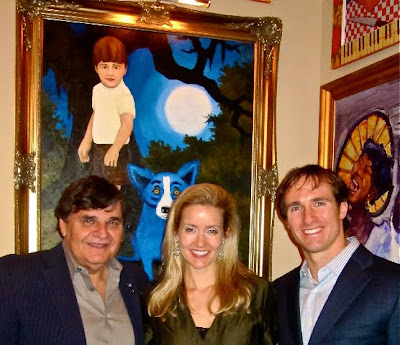 To my surprise I learned this past week that football and yoga don’t generally go together. There I was in a workshop and not only was I the only one who attended the game, but also I was the only one who watched it, or in some cases even knew that they won and what it meant. Okay, so I’m probably putting the words ‘football’ and namaste (loosely translated, ‘honoring the spirit within another person’) in a sentence together for the first time in history, but I can’t help but see this phenomenon ----this team bringing together a city that struggles with race relations and corruption and poverty and crime (and potholes) together in a celebration the likes of which even this party town has never known, and doing it all inside of the Superdome, a structure that just over four years ago held immense suffering.
This victory symbolizes the continued healing of a deep and painful wound ---- a wound that remains fresh here long after the rest of the world thinks we moved on (or, most distressful, that we’ll never recover). It’s as if the doctor at long last visited the waiting room and told the New Orleans family,

“I’ve got great news. She’s going to pull through.” 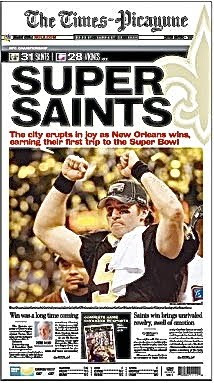 As I listened to the ‘Who Dat’s’ and the car horns early this morning, I developed this post in my head (replacing the “Red Dog” and “Bill Clinton” stories started last week) with not only thoughts of the game, but also various musings from what turned out to be a compelling week on many levels. However, the Saints victory is such a big deal that, let’s face it, no one really cares about the rest. Nevertheless, I’ll reduce my head’s runaway ramble to a few short lines and some pictures: 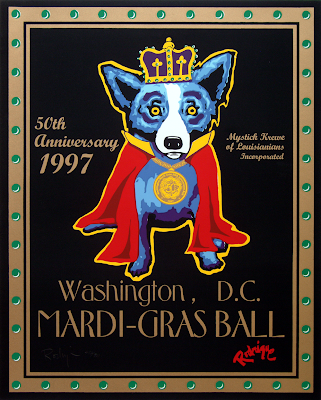 We visited Washington D.C. (returning bright and early yesterday to catch the game) where we attended the annual Krewe of Louisiana’s Mardi Gras Ball, a three-day event hosted for 5,000 Louisiana visitors in the Washington Hilton. 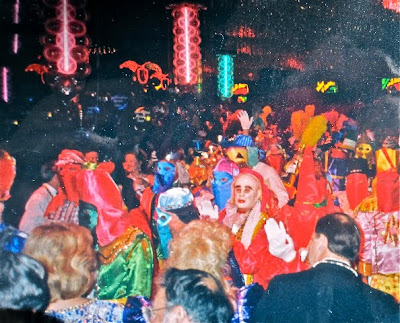 I was going to tell you all about the Marine Marching Band and the Louisiana Festival Queens, and the floats and beads and dancing, along with a few memories of George Rodrigue’s reign as King in 1994. (Pictured, King George in both his formal and casual attire) 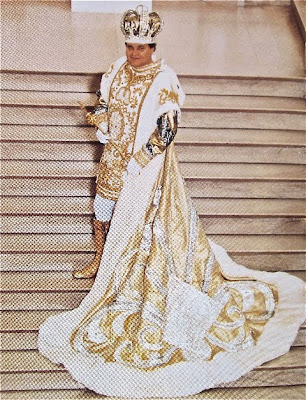 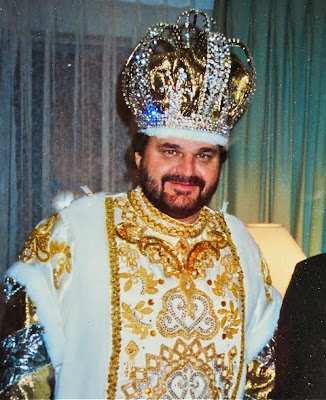 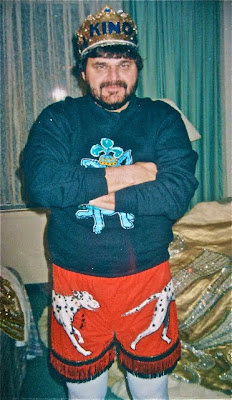 I wanted to cover our fascinating visit to the Hirshhorn Museum, where we learned about the challenges of conserving Damien Hirst’s formaldehyde-soaked cow heads, delighted in stories about stealthy employees spinning Calder mobiles in the night, and viewed Phoebe Greenberg’s short film (and Cannes Award winner) “Next Floor” ---not to be missed.
I hoped to share a story about four-term Louisiana state Senator Dudley J. LeBlanc and his Hadacol Caravan (briefly referenced in the post Jimmy Domengeaux and Other Louisiana Characters), inspired by a lengthy conversation this weekend with his grandson Byron LeBlanc who was also in Washington. Byron unwittingly sent me off on another tangent, however, when he asked about his friend, songwriter Bobby Charles from LeBlanc’s hometown of Abbeville, Louisiana. Charles died last week at age seventy-one, but his legacy remains with hits like “Walking to New Orleans” (recorded by Fats Domino) and “See Ya’ Later Alligator” (recorded by Bill Haley and the Comets).
I never met Bobby Charles. George tells me he became a recluse in his later years, first living on the Vermillion River near Maurice, Louisiana, and later in Holly Beach, until Katrina took his modest home in 2005, sending him back to Abbeville. In 1987 George painted his portrait. He wanted to be immortalized not just through his music, but with an image of the strongest and longest love he’d known. And so behind the adult Bobby, George painted the baby Bobby cuddled by his mother. 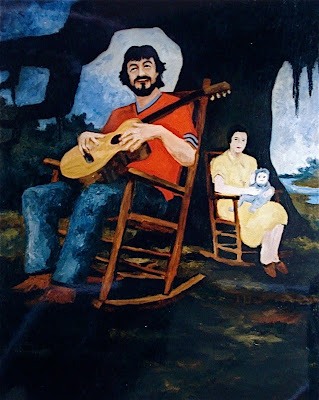 And finally, I’ll share a little tale of voodoo. It’s rare that George shocks me anymore, but he got me good with this one. The Washington Mardi Gras attracts visitors from the entire state of Louisiana (New Orleans, ironically, is the least represented). We enjoy going because we see folks there that we might otherwise not see at all, considering how seldom we make it to Shreveport or Alexandria or Plaquemine’s Parish. This year George came across an old rival, one who handed out his business cards and cozied up to George and the rest of us at an event one evening as though the past never happened and the two were best friends. This public fawning riled George more than I realized. The following day at lunch, he announced to the large table,

And with that, he pulled out the man's business card, covered it with table salt, folded it into tiny pieces, and stomped on it under the heels of his Mardi Gras boots. 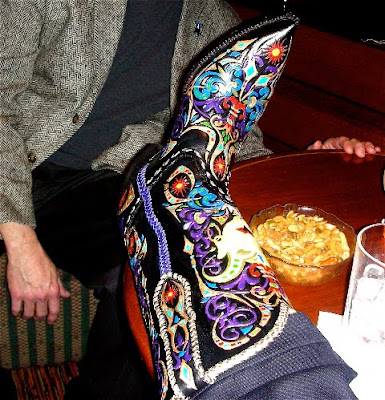 I never knew he had it in him. (and I shudder to think about the response in my yoga class!)
In closing, I want to thank you for reading this blog and giving me a venue to share a sentence that I (along with tens of thousands of others) have been waiting to say and to write my entire life:
...........drumroll...........

“The New Orleans Saints are going to the Super Bowl.” 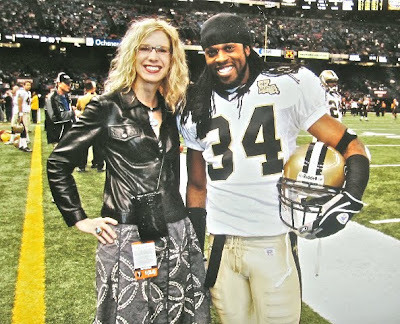 Wendy
(pictured above with my favorite Saints player, Mike McKenzie, who is unfortunately not playing much these days due to injuries; photo courtesy Michael C. Hebert)
For a follow-up post (after the Super Bowl) visit "A Happiness Epidemic: Saints Fever"

Posted by Wendy Rodrigue Magnus at 9:12 AM