George Rodrigue’s newest silkscreen* print, We Blues Dem Away (Ain’t Dat Super) is a typical example of his print process. In recent years he uses the computer to design his silkscreens so that the print itself, as opposed to a painting, is the original work of art. (pictured, 2010, 33x26 inches, partially a benefit for the George Rodrigue Foundation of the Arts) 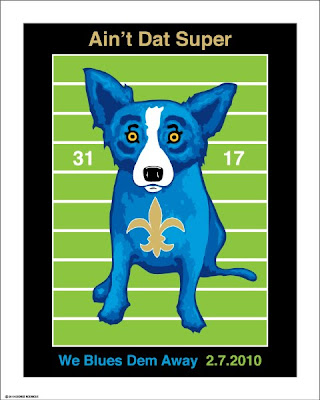 *note that George uses the word ‘silkscreen’ in place of ‘serigraph,’ intending the same meaning.

Since his first Blue Dog silkscreens beginning in 1990, the prints in most cases are unrelated to the paintings. In other words, most paintings are one-of-a-kind images without reproductions in any form, and most prints are original images, without a painting of origin. To put it as simply as possible: there are no paintings of the prints, and no prints of the paintings. (pictured: Gallery Edition II, 1990, silkscreen, 28x25 inches, edition 90) 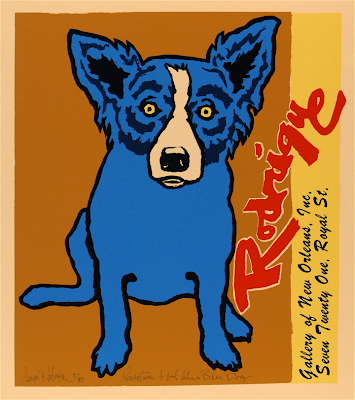 Andy Warhol laid the groundwork for this type of print-making both for George and for other artists such as Roy Lichtenstein, Jim Dine, and Robert Indiana. You may recall from the post Art School: Lafayette and Los Angeles, 1962-1967, that George first saw Warhol’s Campbell’s Soup Cans and other works at the Ferus Gallery in Los Angeles during the mid-1960s. Although dismissed by his professors, the Pop Art style and process impressed George and remains a strong influence today. (pictured: Hot Dog Chili, 2000, silkscreen, 32x18 inches, edition 120) 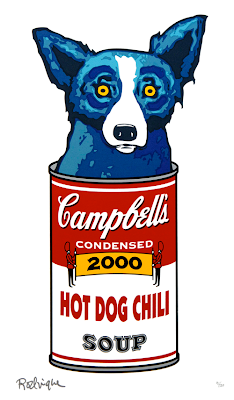 Prints of George’s Cajun paintings are for the most part inexpensive offset lithographs, mass produced, and intended for sale at festivals and poster shops. He did try silkscreening a landscape, Oaks on Bayou Teche, in 1970 and a Jolie Blonde, Morning Glories Blonde, in 1988 (both pictured below). However the dark landscape did not translate well into silkscreen form, and so he stopped with one small run. The large scale (37x28 inches) and more than seventy colors of Morning Glories Blonde proved awkward, expensive, and prone to damages. 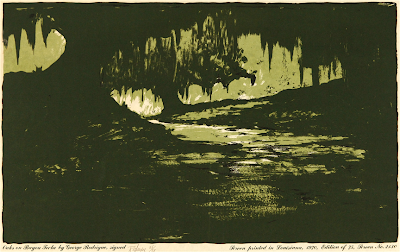 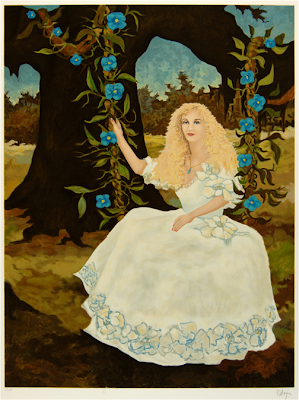 Although George first painted the Blue Dog in 1984, it wasn’t until 1990 that he silkscreened the image. He approached this print-making carefully, because he knew that he had something special in the Blue Dog designs, and he worried that mass-produced, cheap posters might ruin his art’s longevity and alter its perception in the public eye before he had a chance to explore the concept.

George often says that had he discovered the Blue Dog earlier (before his lessons with the Cajun paintings and prints), he might have ruined it. For more on this see the posts: Blue Dog: Out of Control, 1993-1995 and Blue Dog 2000: The Year of Xerox.

In those early years, before the advanced computer tool, he drew a sketch on tracing paper for each color within a print. When stacked, the tracing paper formed a complete image. In the beginning he created simple designs and chose flat paint colors, providing corresponding numbers to his silkscreen printer, who then ran a proof. This involved a lot of guesswork, because the colors appear different when applied to the paper, and oftentimes the prints from the early 1990s included numerous trial runs and color changes until George achieved his desired result. (pictured: Codex Blue Dog, 1991, silkscreen 28x22 inches, edition of 90 with screen proofs) 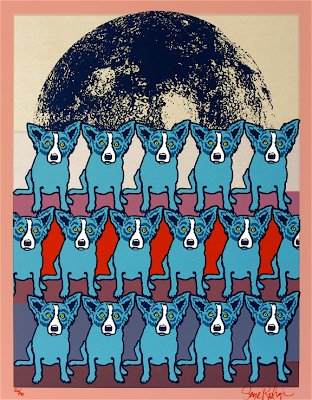 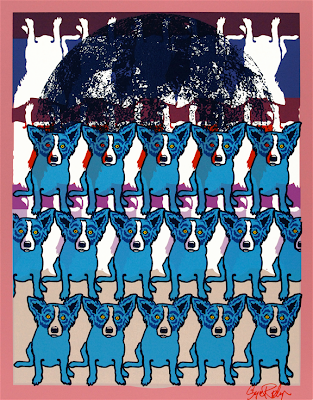 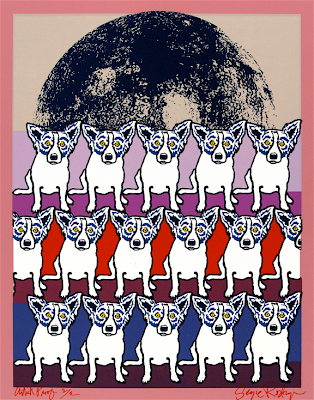 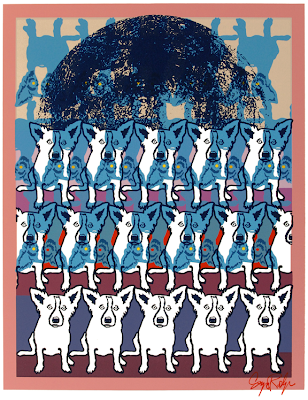 In some cases, to save money and damages (after all, his printer pulled by hand in those days), George actually painted certain areas of a print, rather than run an additional color. (pictured: Dogs in Space, 1991, silkscreen with hand-painted eyes, 33x25 inches, edition 25) 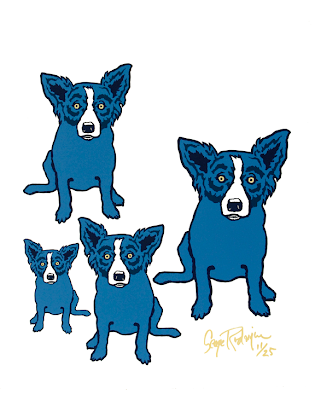 Those early years also challenged George because he used paint, as opposed to silkscreen ink, to create his prints. The color is very thick on the paper, leaving the print susceptible to damages, particularly scratches, chips, and dings. In those days the price point was $75 to $150, meaning that prints were rolled in tubes, thumb-tacked on dorm room walls, or even dry-mounted (glued down when framed). The frequent damages, combined with an average edition size of ninety prints, means that only a fraction of these early prints remain in good condition. (We hold ours in Rodrigue’s archives and no longer offer them for sale). (pictured: Sometimes I Feel Like a Blue Dog, 1991, silkscreen, 22x28 inches, edition 200) 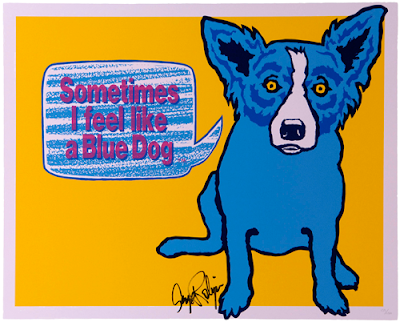 Within a few years silkscreen techniques advanced, and George and his printer grew more adept at the process. Most significant was the switch from paint to silkscreen ink. This resulted in fewer damages, and it preempted the computer in advancing George’s use of color in these prints. Beginning in 1993 his prints are much brighter, and the thinner ink allows more complex designs. (pictured: Junkyard Dog, Chicken in a Basket, Strato Lounger, all from 1993, editions of 90) 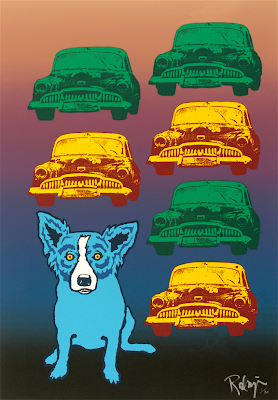 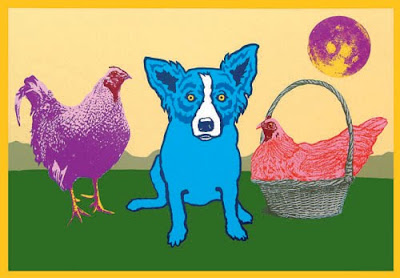 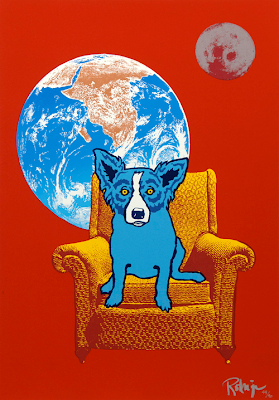 George also became adept at using both clip art and his own photographs within his designs. (pictured: Lunar Buns, 1995; Big Apple Blues, 1995; Tiger Paws, 1997, editions ranging between 50 and 90) 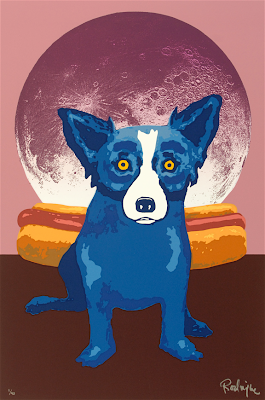 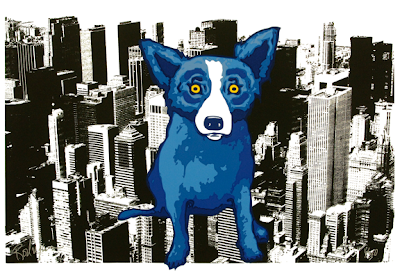 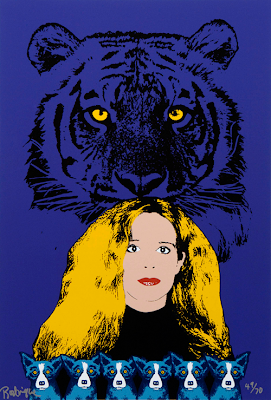 By the year 2000 George had created more than three hundred editions of Blue Dog silkscreens, all with unique designs. He continued growing in this process and made his largest leap yet as he came to understand computer programs such as Adobe Illustrator and Photoshop. He writes in the book Prints (published by Harry N. Abrams, New York, 2008):

“By this time I was experimenting with the computer as an integral part of my creative process. The Rat Pack (2002, 25x50 inches, edition 25, pictured below) is one of the first images I designed using the computer. Although the computer in art is controversial in some circles, for me it is a tool no different from a paintbrush or paint. For many artists the computer allows a flexibility that actually increases their creative output of original works. Because I see my ideas develop quickly on the computer screen, I have a completely different experience and journey in creating the final artwork.” 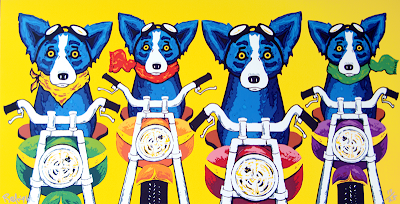 “Without a doubt, the most exciting change for me with regard to having computer capabilities is the large selection of colors at my fingertips. Before the computer, the only way to show the printer my desired colors was to paint a color swatch in the area where that color was to be printed. But today’s technology allows the artist to select from millions of colors, each with an individual number, and put that color swatch onto the area where the color should appear on the print. I can see what a print will look like and make changes to color and design before the first print is produced. This sheer volume of choice essentially eliminates trial and error. It’s easy to see what one set of ten colors looks like versus another set. There are literally countless choices. This gives me (and any artist) the flexibility and capability to produce things that I might never have thought of before.” (pictured: Sand Dollar Beach and The Magnificent Seven, both editions of 90 from 2009).

Without meaning to confuse matters, I should mention that there are exceptions to nearly everything I’ve written above. George enjoys experimenting, and he does not adhere to hard and fast rules when it comes to his art. For example, I made a big point at the beginning of this blog entry that his Blue Dog paintings and prints are mutually exclusive. However, works for Neiman Marcus, Xerox, and the New Orleans Jazz and Heritage Festival are exceptions to this rule. Those works are silkscreens based on paintings. A computer breaks down their colors based on George’s original paintings of those images. Again, this is not the norm, however in some circumstances it makes sense with regards to the final use of the work, particularly when the image commemorates a specific event or person. (For more on these works, including images, see the posts Blue Dog Man, 1996-1999; Blue Dog 2000: The Year of Xerox; The Jazz Fest Poster)

If you look back at images in the posts Blue Dog: In the Beginning, 1984-1989 and Blue Dog: The Ghost of Tiffany, 1990-1992, and compare them to silkscreens of the same years, as pictured in this entry, you’ll notice that, particularly in the early 1990s, the paintings and prints look as if they were created by two different people. Paintings from those years tend to be complex, while the silkscreen prints are very simple.

I find it interesting that George’s paintings of recent years look more and more like those early silkscreen designs, while the silkscreens grow more complex. Unlike the early silkscreens, however, these new paintings are large scale, some as wide as ten feet, a product of not only George’s passion for applying thick paint on canvas with large brushes, but also his excitement over his new French Quarter gallery space (opening this March), where he has the room (for the first time ever) to display these larger works. 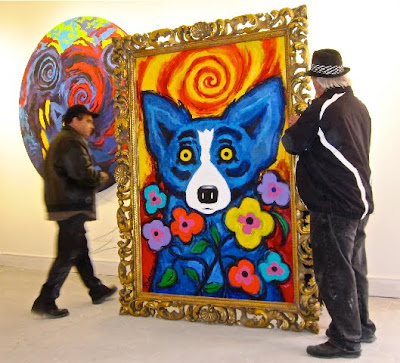 George’s silkscreen history is complicated and dense. I’ve barely touched on it here and hope that, nevertheless, in this day and age of mass produced posters, cheap prints, and giclees (all of which George avoids), you, my reader, will come away from this story with a better understanding of his process. It is print-making as an art form.

For a detailed history of all Rodrigue prints, including the Cajun posters, as well as a complete catalogue raisonné of the Blue Dog silkscreens, I recommend the book George Rodrigue Prints, published in 2008 by Harry N. Abrams, New York, available through your favorite independent bookstore or on-line bookseller.

Posted by Wendy Rodrigue Magnus at 8:52 AM