Clinton, Bush, and Obama: Portraits (or not)

In 1994 some connected friends with the Democratic Party invited George Rodrigue to meet President Bill Clinton. George invited me along and, truth be told, I was more excited about meeting Hillary. My mom worked at a printing company at the time, and she and her friend Bronwen Ross created personalized note cards for the First Lady, which I brought along as a gift.
(This picture kills me, but it kills George worse. We finally removed it from our wall because so many people thought I was Chelsea). 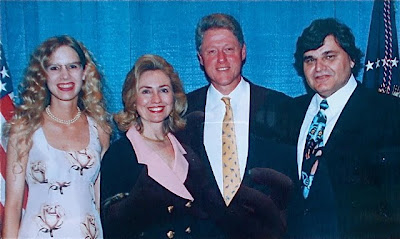 A few weeks later back at the gallery in Carmel, I received a call from Mrs. Clinton’s personal assistant requesting my address, and within a few days I opened a hand-written note of thanks from Hillary herself. I was shocked and impressed, and she became my first big time female role model.  Unlike many of my classmates, I never latched onto Jackie Kennedy.

Her letter surprised me not only because she’s the First Lady, but also because the Washington D.C. trip was nothing short of a fiasco. The Democratic National Party asked George to provide prints appropriate as official state gifts from the Clinton White House. He created a special lithograph of his Washington Blue Dog for this purpose, and he carried these prints to the President on this trip. 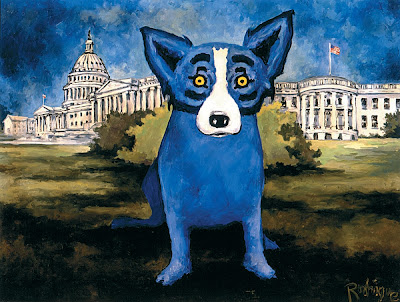 However, at the last minute Clinton stopped the presentation. He thought George Rodrigue was connected, if not the instigator, to the Blue Dog Democrats, the conservative side of the Democratic Party, and apparently a thorn in the side of any sitting Democratic President.

The truth is that the term is derived from the old “Yellow Dog Democrats” in Louisiana’s political history. Although a number of the Louisiana legislators collect George’s work and hang it in their offices, he is unaffiliated in anyway whatsoever with the Blue Dog Democrats or any other political group (keep in mind his long history of Republican Presidential portraits). In fact, when the Blue Dog Democrats tried using his artwork for buttons and other paraphernalia, he was quick to stop them. We do our best to discourage the connection in the press, however it’s tough, because they made the association years ago and still assume that George’s paintings provide a mascot of sorts for the group.

I cannot emphasize enough how careful George is not to align himself politically with any party. He is honored when asked to paint a Louisiana Governor or a President of the United States of any party, but he refuses the request until after the person is elected to office.

Several years passed and at some point President Clinton came to understand George’s history as a painter of Presidential and Governor portraits of both parties, as well as his neutral political status. The air cleared further with George’s Union Station exhibition in the summer of 1996 teasingly titled “Blue Dog for President.”  For more on this exhibition, see the blog Blue Dog Man, 1996-1999. 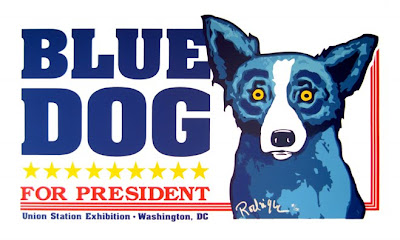 In December of 1996, the Democratic National Party commissioned George to create the official 53rd Presidential Inaugural Portrait and poster, featuring President Bill Clinton and Vice President Al Gore, and called “Walking Into the 21st Century.” In a further gesture of understanding, the President himself requested that his portrait include the Blue Dog.

(For Rodrigue's history with portraiture, see the post Portraits: The Kingfish and Uncle Earl)

Honored by the request, George accepted, but his frustration mounted as the deadline tightened and the persons-in-charge dictated his direction. It was challenging in those days, remember, because it was just before any helpful computer programs. He sent photographs of his daily progress overnight to the White House.  I specifically recall problems with Clinton’s face, which they repeatedly complained was ‘too red’ in the painting.


At last all groups reached an agreement on the final work, but it was so late that we attended the Inauguration with only a handful of silkscreen prints for the President, rather than the several thousand initially ordered and delivered later. Our Washington visit was exciting, because not only did we attend the Inauguration with practically front row seats, but also we met in the Oval Office with President Clinton, Vice President Al Gore, and our old friend Leon Panetta, whom we knew from Carmel. 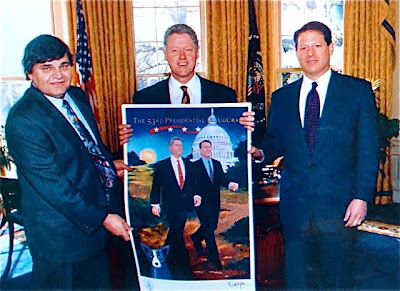 I remember thinking while standing in the most revered room in the country with the most powerful men in the country that I should be more intimidated by the whole thing. I should have shaken or perspired or something. But actually I was calm, partly brought on by seeing Panetta, but even more so because I hoped to see Hillary. I wore a special Blue Dog pin that George made for me, and I intended to give it to her.

When I learned she was unavailable, I gave the pin to President Clinton and asked him to give her my regards.  Hillary was already a Blue Dog fan, pictured here with Mr. Boutte at Mulate's in New Orleans. 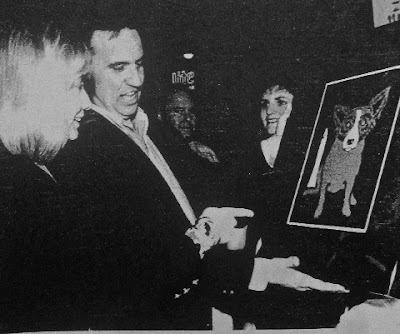 In 2001 George heard from the Republican Party again, this time a commission from a Houston-based supporter for a silkscreen commemorating George W. Bush.

Honored once more to create a work for a sitting President, this particular piece held special significance due to George’s earlier portrait from 1989 of Bush’s father and grandchildren, as well as the positive memories surrounding that experience. 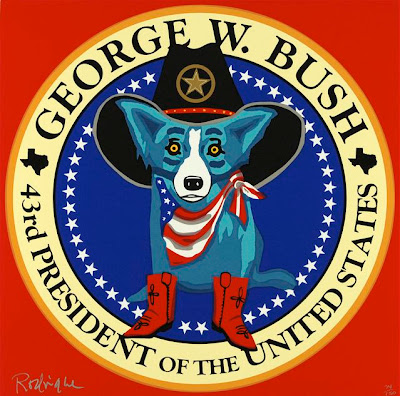 Most exciting, the Bush piece lead to a trio of works in 2008, specifically the artwork for the North American Summit held in New Orleans. This resulted in a presentation with President Bush, Canada’s Prime Minister Harper, and Mexico’s President Calderon, an event I missed because it fell during my annual sister-trip with Heather, something not even Presidents can change, because "without her I don't make sense."** (George, to my amusement, insisted I share with you the reason for my absence, lest you think I wasn’t included…) 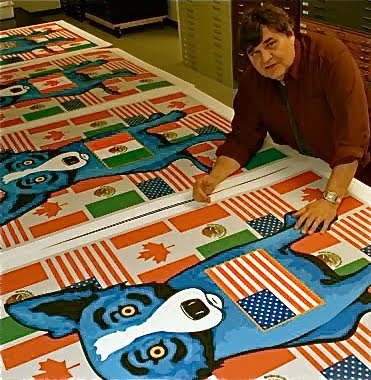 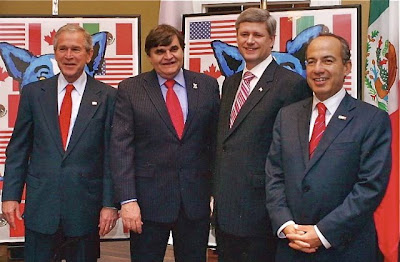 So what about President Obama? No one has contacted George to paint the President since he entered office. One state’s Democratic Party officials requested that he paint Obama during the campaign. However, as I mentioned above, George has a strict policy against painting anyone who’s running for office, and so he declined. If he were to accept such a commission, promoting any candidate with his art, he fears he might offend his collectors.

I can’t imagine why.

**Rose speaking about her sister Maggie in the movie In Her Shoes, 2005

Posted by Wendy Rodrigue Magnus at 7:29 AM