Rosalea Murphy, the Pink Adobe, and Paintings of Evergreen Lake

That’s the first thing George Rodrigue told me about Rosalea Murphy. He met her thirty years ago in Santa Fe, New Mexico at a gallery show of his Cajun paintings. They became close friends, and through her he met a slew of artists, actors, and musicians, a number of which he remains close to today. Nearly all of them were men. However, she also reluctantly introduced him to the artist Georgia O’Keeffe and by accident (when she left him alone at the bar one afternoon) to a young Indian woman named Evergreen Lake. (pictured, Evergreen Lake, 1986 by George Rodrigue) Our first Santa Fe visit together was in 1994. We’d been dating for just over a year, and George shared with me his American haunts on a cross-country drive that summer (a drive we’ve repeated every summer since). We walked into the Dragon Room Bar at the Pink Adobe early on a weekday afternoon. The room was nearly empty, except for a small woman at a round wooden table painted with dragons and planets and roosters.

Sitting on the bench on either side of her were two large dogs, Gina Lollobrigida and Don Juan, drinking from blue glass bowls bearing their names in silver paint. The accomplished flamenco guitarist Ruben Romero serenaded the trio from a barstool a few feet away.

Rosalea swooned when she saw George. Immediately she was full of questions about his Casanova friend and usual travel companion who, unknown to us, had been sending her love letters:

“Where is Romain? Does he ask for me? Why isn’t he with you?”

Don Juan moved closer to Gina so that George could sit closer to Rosalea. I stood and waited.

“Rosalea, this is Wendy.”

She ignored his introduction, and she ignored me, and I got the feeling that my presence represented Romain’s absence and so, before I’d even said hello, I was the enemy. 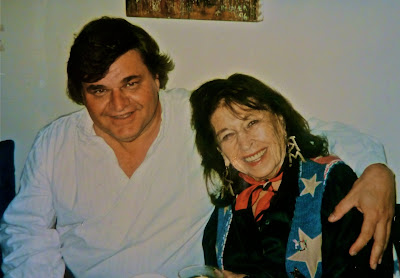 But a lifetime with an eccentric mother prepared me, and I was mesmerized by this tiny person with the enormous presence. At eighty-two years old, her eyes still shined and her hair, died jet black, hung around her shoulders. She dressed like a teenage country music star, in black velvet leggings, a hot pink blouse, a 4-inch silver “R” hanging from one ear and an “M” from the other and, most impressive, hand tooled and painted Falconhead cowboy boots. (pictured, Rosalea and the Dragon Room in an ad for Falconhead) 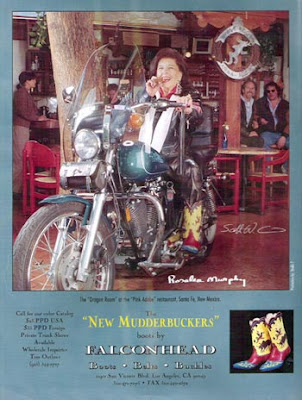 We walked across the courtyard to The Pink Adobe, a restaurant housed in a three hundred year old adobe building. In the 1940s Rosalea moved to Santa Fe from her hometown, New Orleans, and sold hamburgers from a vending cart on the street (the Old Santa Fe Trail), using the money she made at lunch to buy the meat for dinner. Within a few years she purchased the building and opened her own restaurant, The Pink Adobe, where she became famous for her gypsy stew, chicken enchiladas, and apple pie.

She also became famous for her paintings, filling the restaurant and bar with her tables and canvases. (pictured, Church at Trampas, 1952; Still Life, circa 1980, both by Rosalea Murphy) 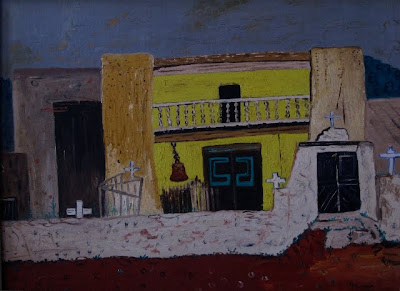 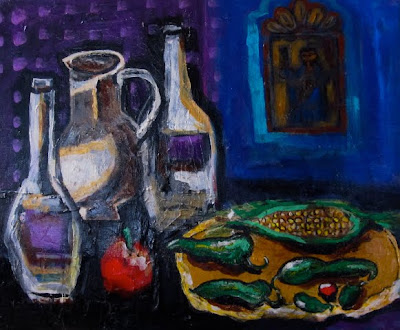 When George stepped away, I dared to speak, asking her about the painting hanging above her head. She looked up:

“My friend Larry Hagman (as in I Dream of Jeannie and Dallas) told me a joke that was so funny, I had to paint it.”

She looked me in the eye for the first time and said (as though testing me),

“What do you get when you cross an owl with a rooster?”

I stared back, and I grinned at that stubborn, charming soul, knowing we connected as she delivered the punch line,

(This is a g-rated blog. If you’re over 18 and can’t guess the missing four-letter word that rhymes with rock and clock and hollyhock, then you’re out of luck. If you’re under 18, you shouldn’t be guessing). 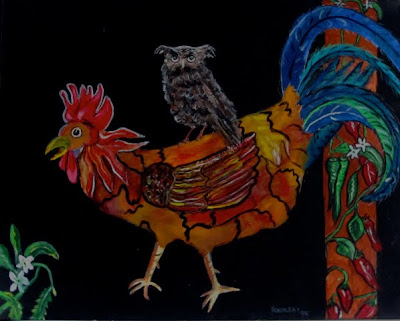 What looked like a price tag hung from the painting.

George returned to the table, surprised to find us laughing and exchanging stories like old friends. I almost lost her that same night, however, when I asked about Georgia O’Keeffe. Rosalea disliked both O’Keeffe and her paintings, never understanding why anyone would care about her flowers and her skulls (as opposed to dragons and roosters, I suppose). She (along with many other notables) hung out at the bar at the Dragon Room. Rosalea cozied up to the presidents and male actors, but it’s a wonder that women still visited the place. She claimed to have thrown O’Keeffe and others out on numerous occasions for no reason other than that she hated them --- or, more likely, because they grabbed the attention of a passing man. 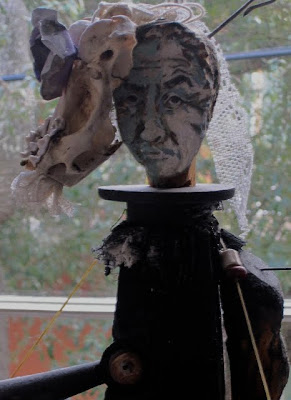 George told me later that he almost lost Rosalea too, when he approached Evergreen Lake at the bar during a visit in 1985 and arranged to photograph her the following day. He saw a particular look in this beautiful young Indian woman, and although they never met again (out of respect for Rosalea), he used the photographs from that afternoon (below) in dozens of paintings over the years. 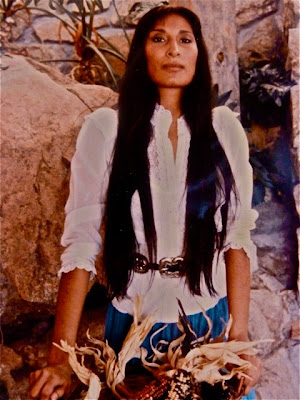 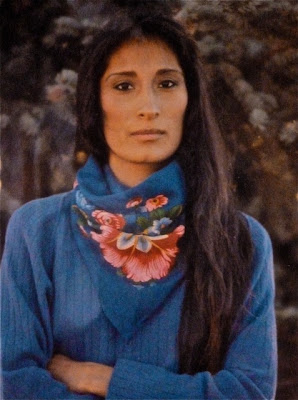 She became for him another Evangeline or Jolie Blonde and appears in his work not only as herself, a native American woman, but also as a Cajun traiteur, or healer. (all paintings below by George Rodrigue, painted between 1986 and 1989) 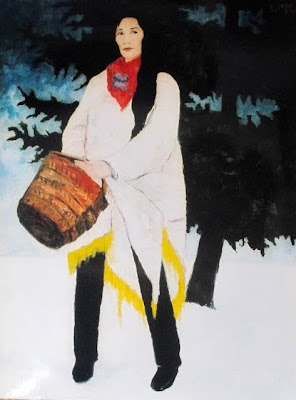 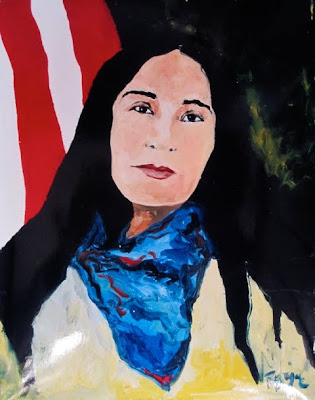 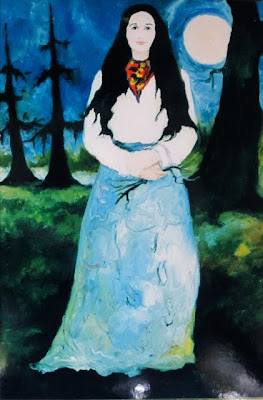 He also incorporated her into the Blue Dog Series. (pictured: Speaking to the Wind, also called I Went to the Graveyard to Hide From the Blues 1992; She Added Color to My Life 1995; Santa Fe On My Mind 1997, all by George Rodrigue) 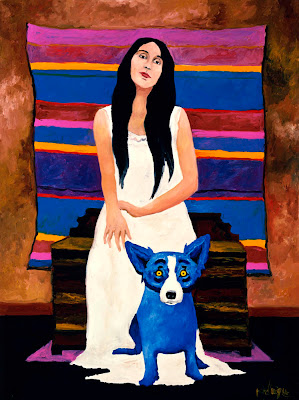 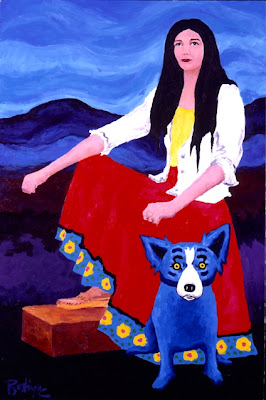 As I carried my rooster and owl painting down the street and towards our hotel, I enjoyed delirious success. And as for George, he could barely believe this conquest (and even tried to reimburse me the $400 for the painting!)

Over the years we grew very close to Rosalea. Through her we met and became friends with several amazing artists, including Armand Lara and Doug Magnus, whose works appear in this blog, as well as Scott Wayne Emmerich of Falconhead boots (you might remember that George performed the gris-gris with his hand-made Mardi Gras boots a few weeks ago). It was special for me to witness these creative pow-wows, as Rosalea and ‘her men’ encouraged each other in the arts. Eventually George and Doug would collaborate on a collection of Blue Dog Jewelry. 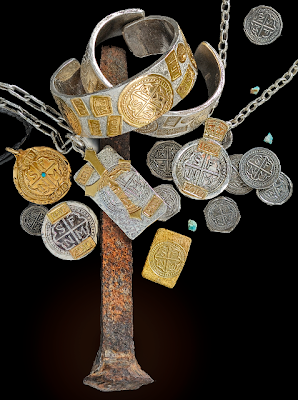 Beginning in 1995 we stayed for a week each summer in her apartment above the Pink Adobe, where we awoke to purple bedding and pink walls and five-foot sunflowers, all complementing the view of the Church of San Miguel (1610), the oldest church structure in America, and located directly across the street from the restaurant. If we happened to be in town on a Wednesday, we joined Rosalea and her merry bunch in the apartment for poker. It was then that I learned that I wasn’t the only woman in her life. As long as the men fawned on her first and the women understood their place, then they were welcome. Her family, namely her daughter and granddaughter, were exceptions to the understanding, and they enjoyed her sustaining devotion and pride regardless of any unstated rules for the rest of us.

Rosalea’s daughter, Priscilla Hoback, is also a remarkable artist. George and I especially enjoy her works in clay, like Adam and Eve, pictured below, which hangs in our courtyard. 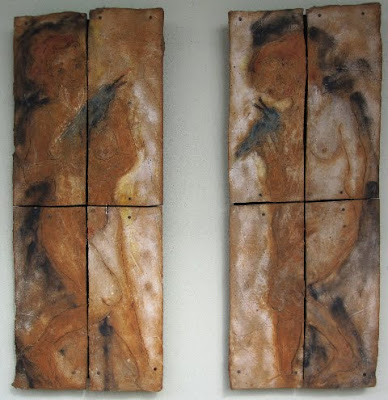 Rosalea Murphy died in 2000. She was buried wearing her “R” and “M” earrings, made by Doug Magnus, along with her custom made Scott Wayne boots. George and I still struggle to visit the Pink Adobe, often avoiding it in fact, because the popular restaurant and bar (now run by her grandson and his family) seems empty without Rosalea and her dogs. We pay tribute to her with the four paintings in our collection (including the ones pictured in this blog), as well as a prized painted table and large pots of sunflowers in the summer.

On those rare occasions that we do stop into the Dragon Room and visit with ‘Rosalea’s men,’ I remember my place, hanging back a bit, watching these talented artists as they visit about old times, current projects, and especially the strong woman who loved them and brought them together. 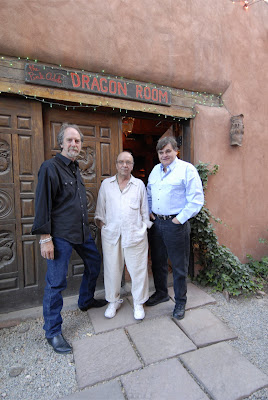 For more on Santa Fe and the artists mentioned here, see the story Land of Enchantment.

Posted by Wendy Rodrigue Magnus at 9:48 AM