With nearly 60,000 visitors in two months at the George Rodrigue exhibition at the New Orleans Museum of Art in 2008, we received hundreds of letters, all positive, mostly from people who prior to NOMA knew little about the scope of George’s career. As a result, they were surprised at how much they enjoyed the show. There was one exception, however: an angry email from a woman who accused George of promoting voodoo and black magic through his art. Surprisingly, it wasn’t the loup-garou and early Blue Dog paintings that bothered her, “a good Christian woman,” but rather the painting Doc Moses, Cajun Traiteur (1974, 48x36, oil on canvas) 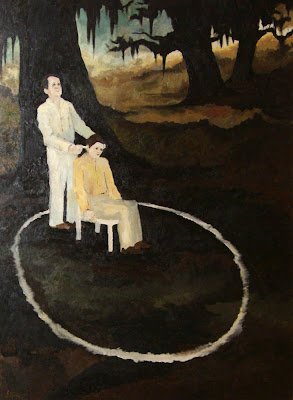 Ever sensitive to an offense, I thought about her words as I played docent to thousands of area school children. I looked for signs of damage in their faces as I told them about the Cajun faith healers and shared this form of mysticism with their young minds. Would they refuse a dose of bad tasting medicine next time they have the flu? Would they lay their hands on a friend’s bad cut, rather than go for help? I recalled playing ‘light as a feather’ as a kid, but I don’t recall any adults levitating their friends.

And then I thought that maybe it’s like Santa Claus or positive thinking or even Jesus to some (or for that matter, maybe it’s like voodoo!), and it allows us that suspension of those things we can touch and see in favor of those things we just know, or those things that we want to understand, like where we come from in birth and where we go in death, why we suffer, and what our dreams mean, or how to explain a déjà vu. Maybe Doc Moses is okay because, like ghosts and heaven and reincarnation, we want to believe and, if we really do believe, then it’s real.

"At the birth of Christ, the cry resounded through the ancient world, ‘Great Pan is dead.’ The animal mind was about to be subdued. Christ’s mission was to prepare the way for floral consciousness." (Tom Robbins, Jitterbug Perfume, p. 325)

A traiteur is a Cajun folk doctor with a special, inherited gift for healing one ailment. In George’s painting, Doc Moses heals earaches. He pours a ring of salt around the patient and touches his ears. Amazingly, only the healer must believe. The patient’s skepticism does not affect the cure.

George also knew of a woman in New Iberia famous for treating warts. She concentrated on one wart a day and could even work over the telephone if you described to her the exact location of the growth. However, the power did not work across water, and so if you lived on the other side of the Bayou Teche, you had to cross the bridge (or take a pirogue) to the opposite bank to make your call.

George’s cousin Catherine tried healing sprains after finding Tant Git’s prayer book, which doubled as her healer’s manual. Magitte, George’s mother’s oldest sister, was born in 1880 and inherited the book from her father. But somehow the power never passed to Catherine. Ironically, she became a nurse, healing in more conventional ways, a practice she gave up because her kind heart cannot bear to see suffering. (pictured, Catherine and Susan) 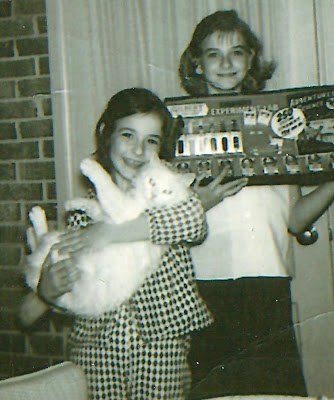 Catherine reminds me of Snow White, with the birds twittering around her head and the animals playing at her feet. During one visit to her home in New Iberia, a noise startled me in her powder room. When I pulled back the shower curtain, I found baby bunnies in the bathtub. (pictured Susan, Uncle Clifton, John Edward, Uncle Emile (from the Aioli Dinner), and Catherine) 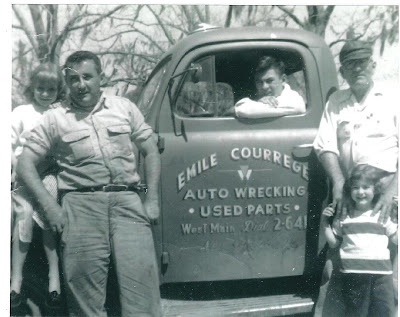 Today Catherine and her husband Victor own Victor’s Cafeteria in downtown New Iberia, and the idea that she’s a ‘healer’ is long gone (although no doubt her delicious crawfish pies and pralines have cured a few ailments). She and her sisters Susan and Cheryl, along with their brother John Edward are the closest thing George has to siblings (for more on this, see the blogs How Baby George Became an Artist and Tombs in the Life and Art of George Rodrigue). 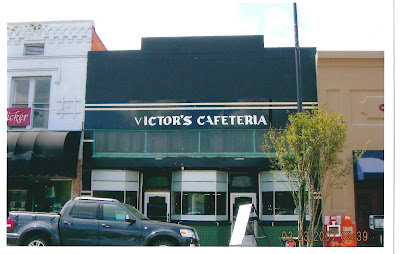 And indeed George does complain about Catherine as though she is his sister, most notably regarding the sign at Victor’s Cafeteria that says “Detective Robicheaux eats here,” based on author James Lee Burke’s famous character. George of course thinks the sign should tout a different local celebrity! (pictured, me, Cheryl, Dana (married to John Edward), Susan, Catherine) 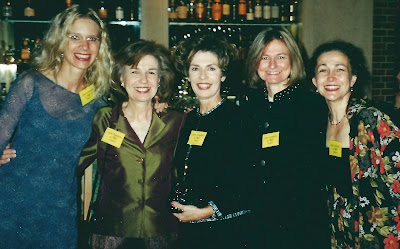 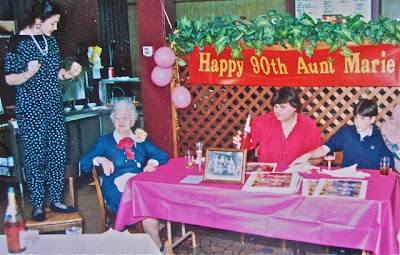 I’ve never met a traiteur nor witnessed a healing. George saw it many times. His Tant Git, to heal a sprain, licked her thumb and traced three small crosses with it on the injury while whispering secret words from her prayer book.

One day John Edward, Catherine’s older brother, asked Tant Git (pictured below, 1955) about the process and how she heals. At ten years old, he was convinced that he should be the next family traiteur. (light as a feather…) 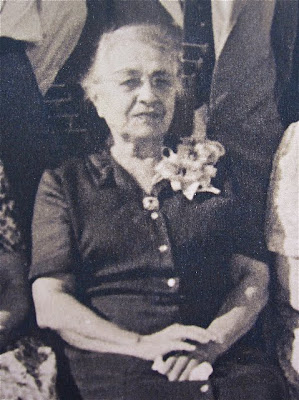 She agreed to share her secret, as long as he promised to tell no one. Meanwhile, John Edward had a secret of his own: he planned on a healing demonstration at school for show-n-tell. Magitte showed him the ritual and said the secret words out loud. John Edward, not speaking French, didn’t realize that Tant Git fooled him, as he repeated to his class three times in French: ‘dog poo, pig poo’….. But his teacher, who understood French, was horrified!

George has painted several traiteurs over the years. If you follow this blog, you might remember Evergreen Lake as a Native American model for the healer from the story Rosalea Murphy, the Pink Adobe, and Paintings of Evergreen Lake. He hasn’t addressed the subject on canvas in quite sometime, but he’s been known to entertain at dinner parties, particularly over injuries, with three little crosses and the magic words…