Unlike most artists at his level, George Rodrigue operates (since 1998) without an agent. There’s no middleman and no discounted arrangements to galleries, decorators, or corporate art buyers. In an extension of his early days of selling on the road from the trunk of his car, he sells from his own galleries, his own business, and although he can’t physically handle the sales himself, his gallery staff remains in close contact.

When you purchase a Rodrigue, although you may not meet the man himself, you can be sure that the person you’re working with has known him for years. Because of that relationship, their approach hopefully comes off less like a canned pitch and more like a genuine sharing of their feelings for the work (along with the facts they know from George). Should you have a question they can’t answer, they simply call him up and ask.

The gallery sales staff is small --- Sandra and Mary in Carmel, Dickie in Lafayette, and Rhonda and Lawrence in New Orleans. George sells his artwork in only three galleries in the country, and he counts his staff among his closest friends. (pictured, Sandra Crake from Rodrigue Studio, Carmel, at The Blue Room in New Orleans with George Rodrigue, March 20, 2010) 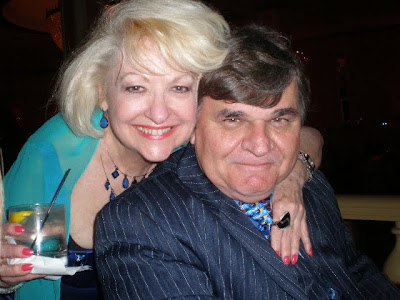 Years ago when I worked in the Carmel and New Orleans galleries on a daily basis, I appreciated that working with the public is an interesting study of human nature. I can’t tell you how many times people asked me if I’d ever met George, all while he’s standing on a ladder just behind us shifting a canvas or changing a light bulb. Other times, even since we’ve been married, people tell me that they’re George’s closest friend or a cousin or (my personal favorite) that they had dinner with him and his wife just last week! Usually these boasts precede some even bolder request for a discount. I guess because I’m humored by the whole thing, even as I deny their request, I generally resist bursting their bubble and introducing myself as George’s wife.

I remember a day in 1992 when a couple came into the Carmel Gallery, interested in the large scale and complex piece, Louisiana Cowboys (1988, 95x65, oil on canvas, pictured below and currently on view at Rodrigue Gallery, New Orleans). At the time, at $125,000 it was the most expensive painting in the gallery. (We pulled it off the market just last year, in fact, then listed at $500,000). 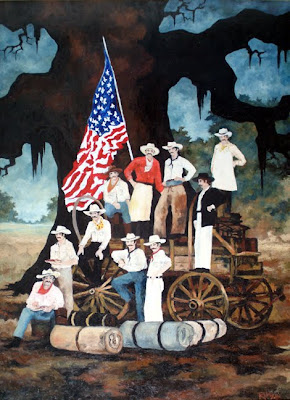 The gentleman pulled me aside (by my elbow, as I recall) and offered $60,000. I explained the price, with my apologies. He replied,

“I know how you people are. You’re like used car salesmen. You will take this price. And if you don’t, I will speak with the gallery manager and have you fired.”

I declined again (along with a silent prayer for his wife, as well as maligned car salesmen everywhere), and asked him to wait while I contacted my boss.

After a minute or so, I returned from the backroom and, at twenty-five years old, with a wild mop of hair, a hot pink skort suit and black go-go boots, reintroduced myself as the gallery manager. Despite the fact that $60,000 would have been the biggest sale in the history of Galerie Blue Dog to date, as well as the fact that I had some discretion in those days regarding price (not to mention, the commission would have resulted in the biggest paycheck I’d ever known), I reminded him again of the price of the painting and that if he was not prepared to pay it, I’d prefer he left immediately.

He did leave, threatening and cursing and (an irresistible exaggeration here) dragging his wife by her hair, all the way out the door. When I repeated the story to George’s agent (my boss) at the time, I nearly was fired. When I repeated it to George, however, he said,

“I wouldn’t have come off a dollar for a jerk like that. You did the right thing.”

So did I need to cut my hair, change my wardrobe, and tone down my lipstick to be taken seriously by the art buyers? No! I resented that notion. I didn’t work in a bank. I worked in a gallery, surrounded by the contemporary, bold, and unique expressions of a man who listens to no one, who for forty years has painted exactly what he wants despite controversy, criticism, and popular trends. Surely my persona (and that of our current staff) should reflect no less.

George last had an agent in 1997, and he bristles at the idea of another. He knows that the people selling his art represent him well, and not only should they represent him with knowledge and integrity, but also with kindness, regardless of a person’s ability to buy, and regardless of any misinformed utterances.

Unfortunately, however, we’re human; we have bad days; something or someone rubs us the wrong way; or we just plain misinterpret a situation. It happens to all of us with the gallery, and perhaps even some of you reading this blog have known offense from me, George, or a member of our staff. For this, I apologize.

And I make restitution with an example-

There was a woman in Shreveport, Louisiana several years ago who did not appreciate my tone when I explained to her at a book signing that George could not sign the page she’d cut out and framed from a calendar. Such an item is a derivative work and a violation of George’s copyright. She wrote a scathing letter about my rude behavior without, unfortunately, leaving a phone number, so that I had no way of calling her with an apology (although I did send a rambling, rather pitiful letter). It was city number twenty-five on a lengthy book tour, and I’d grown impatient with these types of requests --- too often found the following day on e-bay, where unsuspecting fans paid hundreds of dollars for a note card or a page cut from a book, thinking they were buying an original print.

I regret my behavior to this day, because her request probably was innocent. She may have been well intentioned and not known the copyright issues. Perhaps she wanted the picture for the nightstand of her five-year old grandson or to auction off for her favorite charity. In those seemingly harmless cases, however, George still cannot sign, because one day down the road that book page could wind up miss-represented on the secondary market. Nevertheless, she deserved a kind explanation, as opposed to my impatient dismissal.

That incident (and others…), however small it might seem, haunts me today and helps to keep my behavior in better check. (Although I’ve certainly digressed at times; I recall with horror literally sweeping a woman out of the Carmel gallery with a broom one day).

People have a hard time grasping that there is real customer service today (or maybe they’re afraid of the broom!). It’s easy to hit a button on paypal and make a purchase without realizing that someone is on the other end (in our case JD, at our warehouse, carefully packing your print for shipment).

Every two years we hold a Rodrigue Event weekend (detailed in the blog Lectures, Painting Demos, and Events). This past weekend in New Orleans we visited with clients from around the country for three days of parades, parties, lectures, and art. 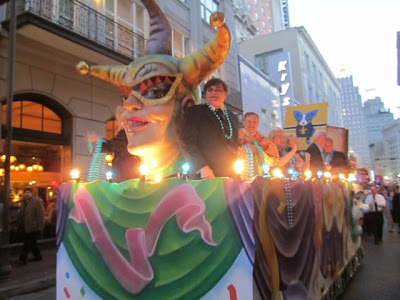 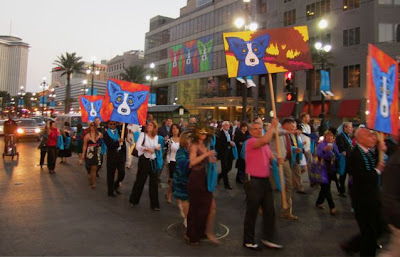 It gives these fans a chance to visit with George and ask questions about his work. It gives us an opportunity to thank his patrons, many of whom have collected his work for years, supporting his various artistic whims with curiosity and encouragement, something he knew little of in the 1970s and 1980s, when his fans and especially his agents expected Cajun art, dismissing new directions such as the Blue Dog.

The least we can do for these supportive collectors is show them a good time in our favorite city. This year's event weekend included themed parties such as 'A Blue Evening' in the Roosevelt Hotel's famous Blue Room 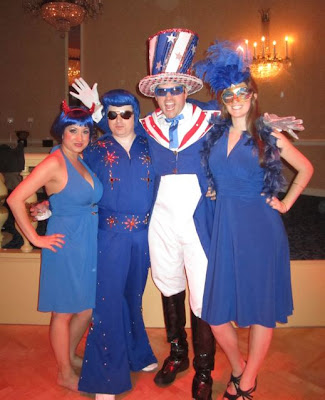 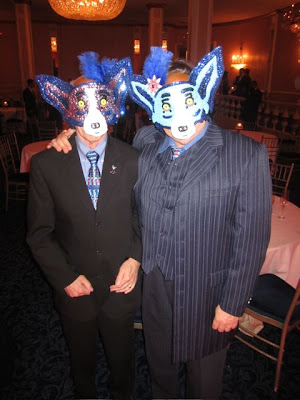 A 1940s party at the National World War II Museum 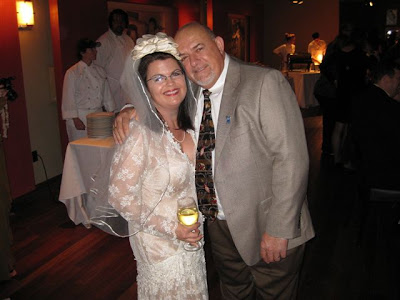 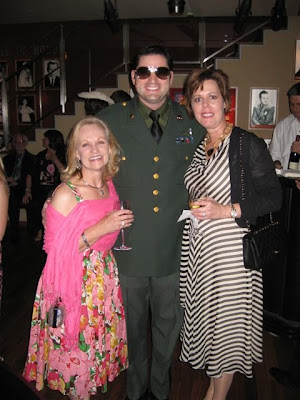 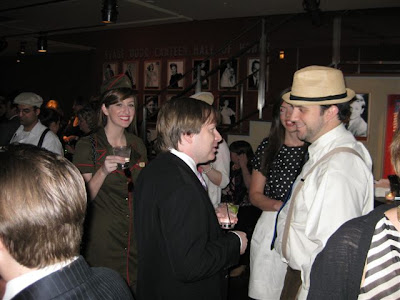 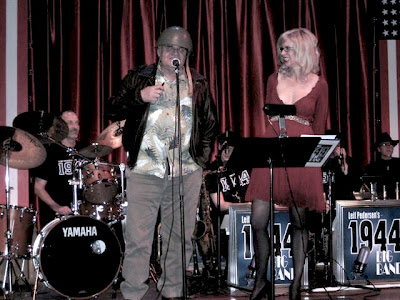 And painting demos with lectures at both the new Rodrigue Gallery at 730 Royal Street (where we'll open in two weeks), as well as during a jazz brunch overlooking the city of New Orleans at the Sheraton Hotel. 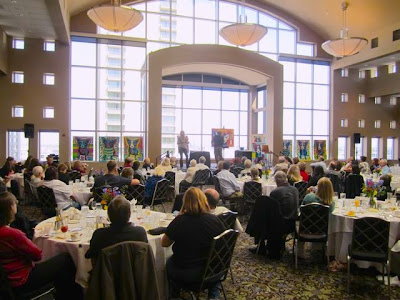 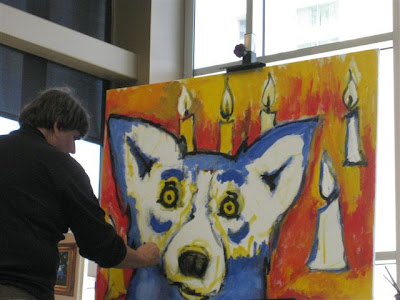 Since breaking free of his agent, George has explored not only unpredictable and dramatic changes within the Blue Dog Series (see the Blue Dog links listed under 'Popular Musings' to the right of this post), but also Hurricanes, Bodies, Portraits, and more, all with the support of a solid fan base, one that appreciates not only his diverse and creative whims, but also his accessibility through these events.

George does not hide behind an agent or a computer. However, he does hide for several months a year on a mountain in central California, where he spends twelve to fifteen hours a day at his easel, pressured by no one’s expectations but his own. Meanwhile the rest of us stand by, awaiting the surprise, anxious to share these new works, maybe even a new direction, with his fans and collectors. 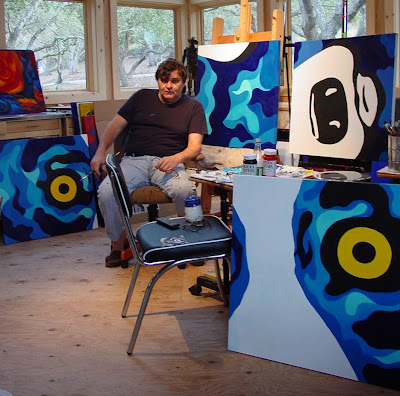