If Not Painting, Then Cars…

We had dated about a year when George Rodrigue and I had our first fight. I had just visited him in Lafayette, Louisiana, where we cruised along the Atchafalaya Basin levees one moonlit night in his prized possession – a black Mercedes SL Convertible hard-top. A month later, as we drove down a Carmel, California street in George’s rental car (because I never cared for cars and managed easily without one for the six years I lived there), we passed a small black car and, trying to impress him, I said,

He pulled over, turned off the car, and looked at me as though I’d just confessed to murder:

“Take that back right now.”

“I’m not kidding, Wendy. That is a Toyota. You take that back right now.”

Alarmed (even scared), I took it back. And immediately my ‘car education’ began. To this day, he quizzes me on the road, keeping me sharp. He’s proud that I accompany him to car shows and that I express (feign) an interest. And I swear he nearly proposed again the day I announced that the Maserati is my favorite car (as opposed to my previous favorite, the dark blue Chevy Chevette I inherited from my Great Aunt Lois on my seventeenth birthday). He realized with pride that he transformed me into a car snob, and, as an extra bonus, a snob with restraint, as I don’t aspire to actually own the Italian wheels. (pictured, Junkyard Dog) 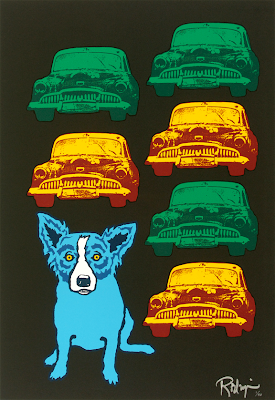 When I first met George, he carried his paintings around the country in a blue van. I remember riding in it after New Orleans By the Bay in 1992, from San Jose, California to Carmel, driving down Hwy 1, his kids watching television with headphones in the back, and Roy Orbison accompanying our conversation in the front. Like his other cars, the blue van stars in many stories, such as the time Bud Petro’s suitcase (with leisure suits) was stolen out of the back, prompting a near break-up of their friendship, or the time a tank-like vehicle pushed the broken-down van out of the Holland tunnel, leaving George stranded alone in a questionable section of New Jersey. 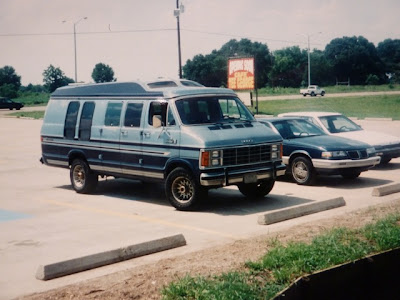 Before the blue van (and long before me), there was the gold van. George was famous among his friends for altering his vehicles to suit his needs (I believe today they refer to it as, “pimp my ride.”) In the case of the gold van, he raised the top. 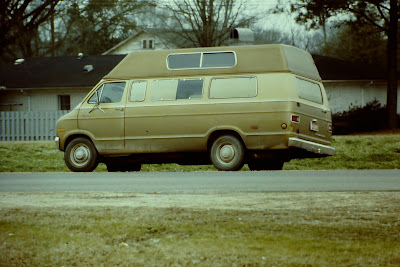 “I wanted to walk around in it,” he said, annoyed with my dumb question.

At one point he drove a Mercedes turbo-diesel, pulling his paintings from the trunk for clients in Houston, Jackson, Birmingham, and Shreveport. 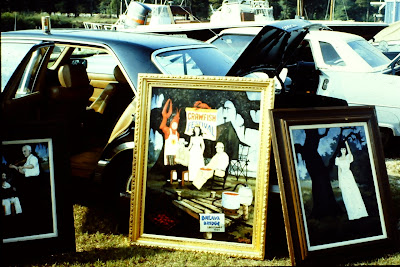 And in a way, some things never change; they just get better (or rather, bigger), if you consider his recent trip to Houston, visiting clients in a U-Haul. 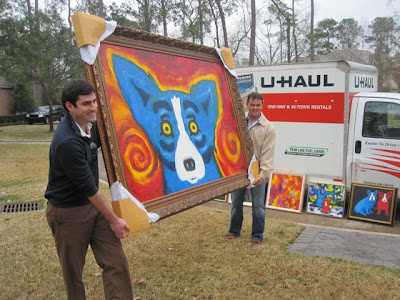 Never was George happier with a car or more suited for travel, however, than with his 1977 Lincoln Continental Mark V. It was, without a doubt, his dream car. (pictured, George today holding the Mark V’s brochure, on permanent view in his studio’s curio cabinet). 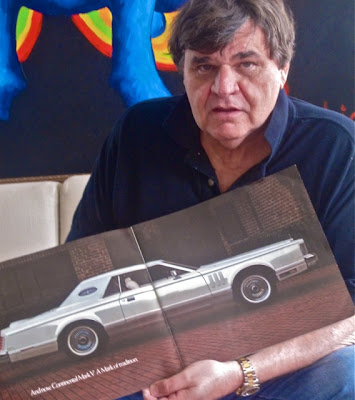 To fit larger paintings, he removed the backseat and cut out the struts (between the seat and trunk) to slide large canvases easily from the trunk to the front seat. He rigged a TV under the dash, and beneath that a ‘particularly cool CB’ (his words), made to look like a telephone.

“The national speed limit had just dropped to 55 mph, so everyone started putting CB’s in their cars to listen for ‘smokies'." (Although I’m sure he knows I wasn’t born yesterday, he actually explained to me at this point in the story that a ‘smokey’ is a cop, “as in Smokey and the Bandit.”)

Did you have a handle?

He looked at me dead serious (and then insisted I include the following story):

I remember this one night driving through Dallas around 11:30, and a woman comes on the CB:

One trucker asked if she was east or west bound. Then another for her mile marker. Before you knew it there were ten guys asking to buy her coffee or a beer.

I loved the CB late at night. I’d just drive along and listen to the chatter.”

This fascination with cars started early for George. He tells stories of childhood humiliation, about holding up traffic on Pike’s Peak in 1953, because his mama was afraid to floor her ’49 kelly-green De Soto on the way up the hill. Then there’s the time she test drove a ’56 Buick to the grocery store on an August afternoon and accidentally returned the car with a watermelon in the trunk. (They lost a friend of the family over that one…). Once she drove her mother’s bones around New Iberia for three weeks in the trunk of her Dodge Dart. (Lucky you, there’s a post on this one). Even when she lived with us in her 90s, nearly everyday she asked her son, “Take me for a ride.” (pictured, The Devil in Me) 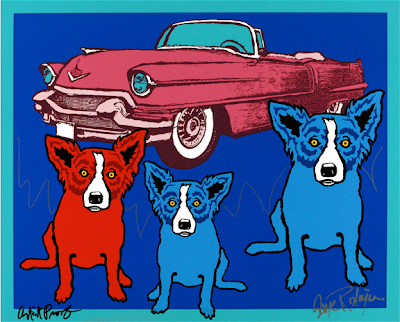 I’ve written before about George’s daddy’s truck (George’s first ride), which said “Rodrigue’s Portable Concrete Burial Vaults” across the side, and the ’62 Corvair that took George back and forth on Route 66 between New Iberia, Louisiana and art school in Los Angeles. (pictured below in New Iberia with his buddies and packed for the forty-hour drive to school). 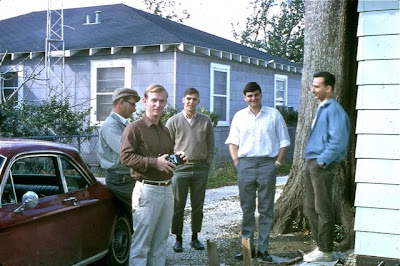 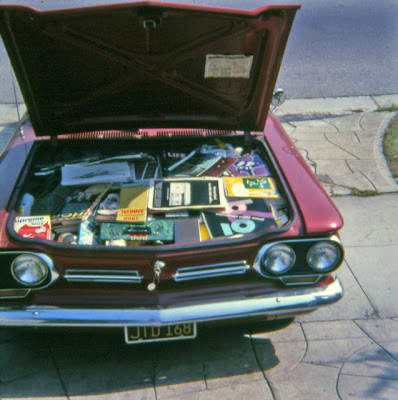 The Art Center College of Design in Los Angeles was known for automotive design, and George was in heaven as a student, even considering this as a career. 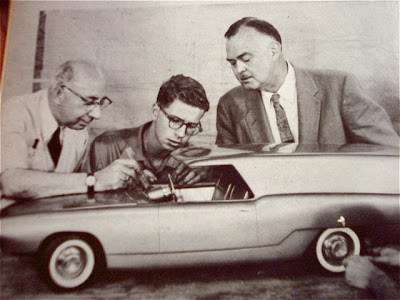 I’ll never forget one night maybe twelve years ago, not long after we were married, when I awoke around 3 a.m. to find George lying over a large piece of paper on the floor of our bedroom, with a flashlight in his teeth and a pencil in his hand.

“What on earth are you doing?” 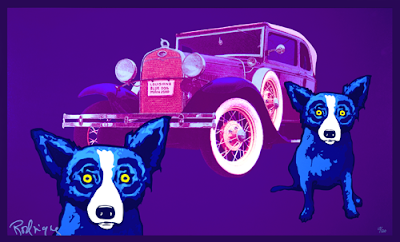 Whether or not he could afford it, George always surrounded himself with his dream cars. He described it to me once like this,

“I very rarely get depressed. But when I do, I buy a car. It’s not the car that cheers me up, but rather figuring out how to pay for it. The challenge pulls me out of the dumps.”

These days George owns several dream cars, and they might not be what you’d expect. Oh yes, there’s a Mercedes (a family-style four door) in the garage, but there’s also a (to my mind, extremely groovy) 25-year old Buick limo he bought several years ago at a car auction for $5,000:

"Can you believe it?” he asked me, when he gave it to me for Christmas. “It was custom made for the Cadillac dealer in Houma, Louisiana!”

To top it off, George himself is the driver, oftentimes dressing the part when he takes me out for dinner or, most fun, chauffeurs me between New Orleans art openings. People ask, “Where’s George?” and I lie, “Painting,” because I’m unwilling to admit that he just didn’t want to come in, and so he’s circling the block in the limo! (He gets a real kick out of wearing that hat and opening my door in front of the galleries, so that no one knows it’s him). Well, I guess the cat’s out of the bag…

(pictured, George the driver with my friend Nancy Broadhurst, in front of our limo, after he dropped us off for Nancy’s birthday party). 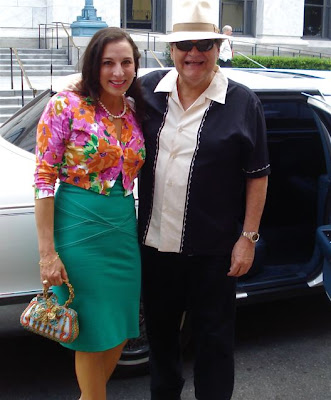 In California we keep a Dodge Magnum, which just may be George’s favorite car (pictured below with Jacques Rodrigue as Bear Head). He got it from a flooded car lot following Hurricane Katrina. (The bear head thing too runs in the family. Jacques’s brother André drove around Lafayette, Louisiana for years wearing a football helmet). 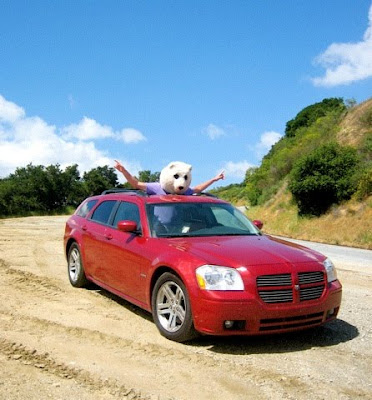 George also helped my sister Heather find a Magnum, ‘the best car she’s ever owned,’ she says, complete with her license plate, ‘HTG,’ Heather the Great:

“Not only is it a grocery-getter, it hauls kids, dogs, and bmx bikes!” 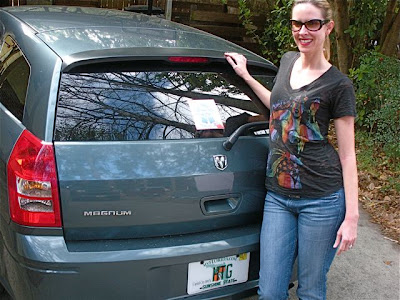 My cousin Elizabeth has lived with us for the past few years and parks her car at our house. I’m to use this blog (according to Elizabeth and George) to convince her dad to buy her a new car because, as she mumbled today about the dead-again engine (on her way out the door and into a cab, lest she miss class), 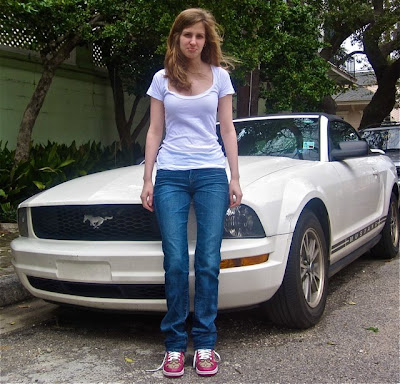 Once the blue van died (at 130,000 miles), George bought an Excursion, amplifying its politically incorrect status with a pumped up engine, bigger wheels, and all kinds of extras. Without a doubt, this truck, now with 140,000 miles, is our living room on wheels. We use it for one thing only ….to cross the country… something we do at least twice every year.

We have strict rules in our truck: no reading, no books on tape, no computer, minimal phone, and music only half the time. We travel in silence or we talk about the road (aside from our occasional forays into Jimmy Swaggart spirituals). We hit our favorite truck stops and Best Westerns. We take side roads on a whim and might spend an afternoon at Meteor Crater or the Petrified Forest, or three days in Tombstone, Arizona. We fell in love with America in this truck, and as a result, ‘the West’ is our stomping ground. We passed on dreams of Europe and the Islands long ago, instead tracking America’s ghost towns or all twenty-one California Missions. Our vacation begins once we’ve crossed Texas, and for some reason it just doesn’t work in an airplane. (pictured, last year at the Grand Tetons, Jackson, Wyoming) 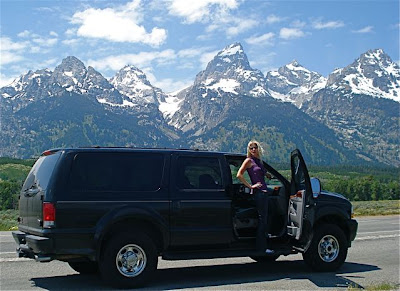 So I wrote this blog for George in honor of his birthday, March 13th. We stopped exchanging cuff links and perfume long ago, opting to make our presents (boy do I make out like a bandit-)

Here's a little something special for you, George --- a story about your cars. As we find more pictures, I’ll fill them in.

Happy Birthday! Thanks for the great ride-