The Name ‘Rodrigue’ with Pronunciation and a Bit of History

The name 'Rodrigue' is a common one in Cajun country. However, outside the southern part of his home state, George Rodrigue endures miss-pronunciations and miss-spellings on a regular basis. 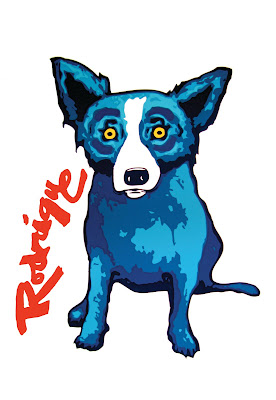 Most of the time, people say or spell the name ‘Rodriguez.’ A close second is ‘Rodrique’ (with a ‘q’ in place of the ‘g’). And bar none, the most popular miss-pronunciation is ‘Rod-ree-gay.’

People like George’s mother (adamantly ‘French’ as opposed to ‘Cajun’) pronounce the name ‘Row (as in ‘row your boat’)-dreeg.’ And George, Cajun through and through, pronounces his name ‘Rod-reeg.’

The name, I’m told, originated in Portugal and began as ‘Rodrigues’ (pronounced ‘Row-dreegsh,’ rolling the first ‘R’). It probably changed (although no one knows for sure) in the mid seventeenth century when Jeanne Rodrigues (born in Portugal) met and married Anne LeRoy (born in Paris, France), altering the name by dropping the ‘s’ to sound more French in the Acadian community of Beauport, Canada, where they made their home. (pictured, 1983 poster from a painting of Evangeline) 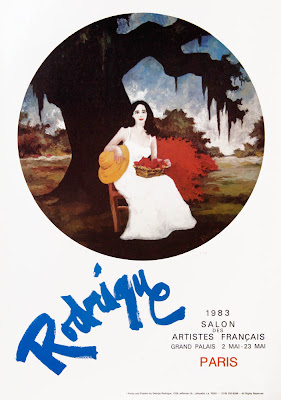 By the time of the Grand Dérangement* of 1755, the name ‘Rodrigue’ was around for a good one hundred years. George’s Aunt Bertha spent much of her adult life (long before the internet) researching the Rodrigue genealogy. The Courregé side (her father’s name, and George’s mother’s maiden name) was easy, because they knew that their father came to New Iberia, Louisiana directly from France. His thirteen children used this heritage to call themselves the more elegant ‘French,’ as opposed to what they perceived as the more primitive and ignorant ‘Cajun.’ (pictured, a 1980 poster from a painting of former Louisiana Governor and U.S. Senator Huey Long)

George’s mother, Marie Courregé, was more Rodrigue than Courregé, ironically, especially once she married. Her mother was a Rodrigue, meaning that George’s parents were first cousins. (pronounced ‘Cour-a-zhay’ in Louisiana, although in France it’s closer to ‘Cour-rezh’)

According to Bertha, four Rodrigue brothers entered New Orleans in 1755. She suspected but could not confirm that they came from Canada. The brothers settled in the southeastern part of the state, in Lafourche Parish, specifically in and around the town of Chackbay, Louisiana. Today the town holds an annual Rodrigue reunion, attracting 3,000 – 4,000 people. (pictured, 1991 poster from a painting of Clay 'Baby' Meaux) 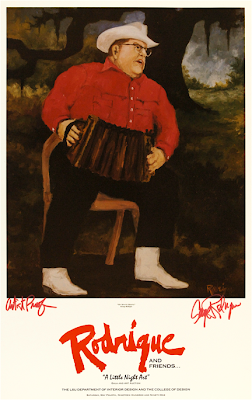 In 1972 George received a letter from a Canadian professor asking about the Rodrigue name. He had read about George in an art magazine, as a painter of Cajun folk life. It turns out that this man held the rest of the puzzle, having traced the Rodrigue name (or Rodrigues before the move) from Portugal to Beauport, Canada. He knew of four Rodrigue brothers leaving Canada in 1755, but knew no further. George put him in touch with Bertha, and they connected the dots.

George Rodrigue is proud of his name and his Cajun heritage. He named his sons, André Rodrigue and Jacques Rodrigue, after their Canadian ancestors. (pictured, André, Jacques, and George Rodrigue, with our nephew William) 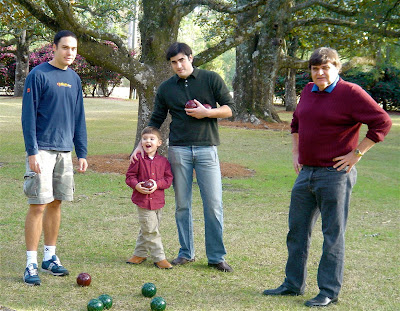 George uses his name as both a symbol and an interesting graphic element. This is especially true of his Louisiana commemorative posters, when he breaks up the plain but necessary border text with a large and bold signature. 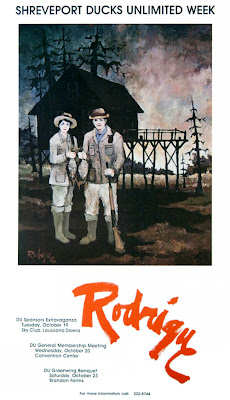 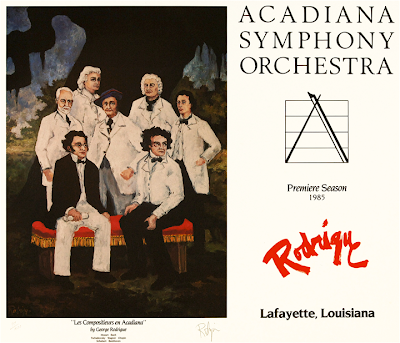 With the Blue Dog Series, specifically the original silkscreens, in numerous cases George incorporates his name as a design element, sometimes so strong that it competes with the Blue Dog for attention. 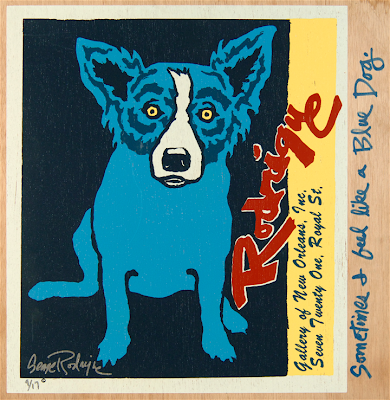 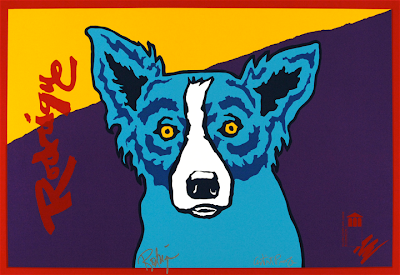 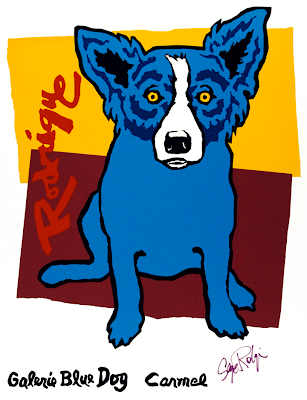 Finally, I apologize to those of you who are less than thrilled with this rather dry blog entry (and I do promise to make it up to you). However, the second most asked question we receive (following “Where did the Blue Dog come from?”) is “How do you pronounce your name?”

And so there you have it, the name 'Rodrigue' (pronounced ‘Rod-reeg’), with a bit of genealogical lagniappe thrown in.

**This blog is not meant to be a definitive source of history on the name Rodrigue. Rather my priorities centered on pronunciation and George’s use of his name within his work. For detailed research on the name Rodrigue, visit http://www.genealogie.org/famille/Rodrigue/