I’m sitting on our back porch drinking a fabulous glass of rose wine shipped to us today from Georis Winery, a tiny establishment down the street from our house in Carmel, otherwise known as la-la land. The bottle arrived this afternoon in a box with our club membership, and I couldn’t resist.

From my vantage point I see the west bank of the Mississippi River, and I watch last year’s amaryllis bulbs, the ones I threw in the yard from our 2008 Christmas planters, breathe and grow thanks to the winter’s freeze, during which we lost (so I thought) everything but the oak tree --- which is the most important plant after all, since Mr. Foche probably nurtured it himself when he built this house in 1835.

These pink flowers, the color of Georis rose wine, are the only things threatening to bloom alongside the pond, where three fish, Katrina survivors, swim. (We started with forty, and in all fairness, the egrets got most of them long before the storm).

God only knows what that tree has endured. Nicholas Foche, a free man of color from Jamaica, built this house long before the levees. That means that the Mississippi River rushed through the ground floor, from the back door to the front. The water settled at times, I know it did. It delivered alligators, snakes, and lots and LOTS of rats, and it bred millions of mosquitoes, spreading fever, disease and death throughout this, a great American city. (but I’ll talk more about this history another day…)

I don’t think Treme (based on a neighborhood only a few blocks from ours…or one that might as well be ours, since the movie trucks park out front near daily) was fabulous, but I don’t think it was awful either. It’s a premiere, and I’ve yet to like a premiere, not even Murder, She Wrote or The Golden Girls, which I love today in their reruns, but which nearly lost me years ago out of the gate.

At first it seems like a sick joke on behalf of the Treme writers to suggest restaurants and groceries and water bills and newly painted houses and dumpsters and taxis (and Elvis Costello and a limousine!) and Zapp’s potato chips and safe neighborhoods and nighttime streets devoid of hoodlums, and people who feel like singing ---- all just three months after the storm. 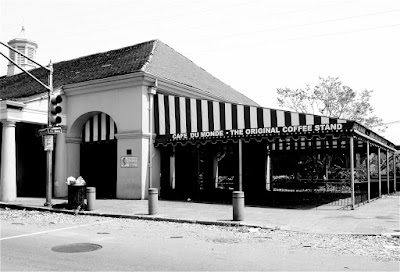 And yet right this second, four years and thirty weeks after George and I (the oh-so-fortunate) sat in a hotel room in Houston and watched on television as our city drowned, I sit on our 175-year-old porch and watch the tops of the ships go by. I see tourists wave to the shore of the river that made Louisiana the key state in Napoleon’s sale of 828,000 square miles of this country, and I watch our oak tree, now held together by steel wires and sprouting strong for the first time since the storm, near floating, swaying, and shaking its branches to the beat of New Orleans. Three months after or four years and thirty weeks after --- I guess it doesn’t much matter.

I’m supposed to be writing about Jazz Fest. Good grief, there’s a two-part series I promised you! And yet I’m drugged and distracted by (okay, the wine) the sounds of New Orleans, of the electric guitar floating this direction from the Bywater, mixing its resonance with the tugboat engines, the train whistles, and the scrape of car rims against our pothole (less than a month, Ray, less than a month…).

Now add to that, the blues:

"She’s my sweet little thing, she’s my pride and joy

We were the lucky ones. Out of our house for only nine months. No flooding. But the 150-year old asbestos roof blew off (or rather, thirty percent of it did), leaving our house wet, moldy, uninhabitable, and yet nothing to complain about. In a fit of embarrassing shame, as we stayed with our former and dear neighbors in Lafayette, George and I worried about our tree:

“What should we do? How can we save it?”

We couldn’t ask for help. It’s a tree!

Through the kindness of a police officer we were allowed into New Orleans three days before Rita struck. We saw an abandoned city, a twilight zone, not a car, not a person, not a bird, not a sound, nothing. We walked through an empty and immaculate Jackson Square, perhaps the only place in New Orleans devoid of debris, the backdrop for our president's televised speech. 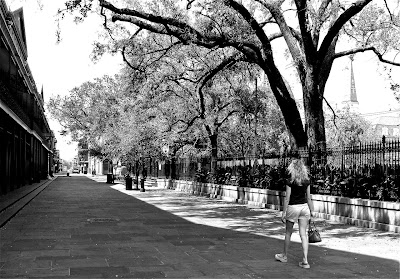 We found our house wide open and remarkably, shockingly without vandalism. In the 100-degree heat we climbed up and down the three flights with paintings. 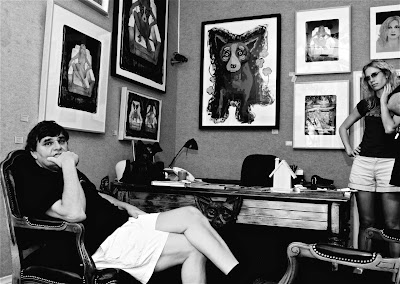 You see, we did not evacuate, but rather, by happenstance, were in Houston for an exhibition. Evacuation differs from weekend travel. Weekend travel is cocktail dresses, bathing suits and make-up. Evacuation, however, is paintings and photo albums and whatever that last little thing is that one dreams of having on a deserted island. 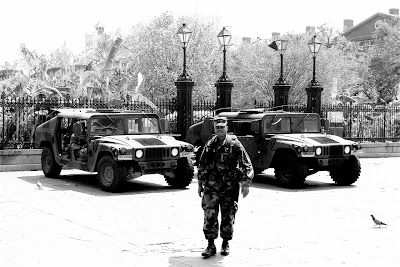 These are the things we grabbed. Silent and rushing, we took a look at our tree from a distance. Its roots had kicked up our courtyard in places three, five, and six feet high, so that we couldn’t get close. The oak was split but standing, with George’s life-size painted fiberglass cow (from the 1999 Chicago Cow Parade) caught upside down, high in its branches. Pained for our entire city, we stared silently at our tree and ignored the complaints of our (later replaced) insurance adjustor:

“God it’s hot! Where can I get a cold drink? Don't you have a better way to pack those paintings? That bathroom is filthy!”

We have pictures of all of this, but I hate looking at them, and I don’t want to share them. George talked me into a few, however, and I sprinkled his choices throughout this blog. 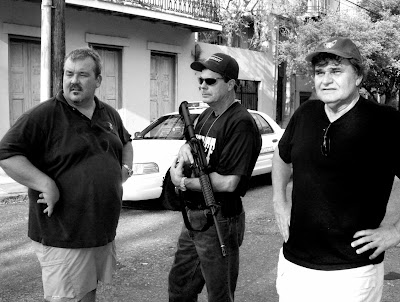 No doubt, Treme missed a lot. But I think that’s okay. The show actually idealizes us in some important ways, too painful, too heady, and too political to detail here. However, I’d be hard-pressed to find anyone who wouldn’t fall on their knees to see a Mardi Gras Indian dressed and singing with conviction even now in their street.

And yet our oak, twice each year since Katrina, holds parrots, a whole hierarchy of them, from the top of the tree to the bottom, the macaws to the finches, a migrating flock of freed animals, perhaps the meaningful equivalent of a costumed tradition.

I realize that Treme is a TV show; it’s reality-based fiction, not a documentary. It’s okay with me that the story is skewed. And it must have roused feelings for everyone here in New Orleans who watched it. Somehow Treme makes us look wonderful and like a third world country, both at the same time. Heck, just three months after Katrina we’re downright beguiling! But then, maybe we always were.

I remember the first time I laughed after the storm: My friend Geri described the $200,000 worth of rodent damage to her house as "squirrels gone wild."

I remember the first time I sang: It was Lundi Gras (the day before Fat Tuesday), and the Chee Weez lead thousands of us, strangers from the entire Gulf Coast, people from Biloxi, Pass Christian, Slidell, almost all living in FEMA trailers, gathered together at Spanish Plaza and singing a capella as though we'd practiced it for months,

"Jeremiah was a bullfrog, Was a good friend of mine..."**

Visit New Orleans if you get the chance. Go to Vaughan’s and hear Kermit Ruffins. Eat a po’ boy. Take a carriage ride. Visit the New Orleans Museum of Art. Dance at Mulate’s. Ride an airboat through the swamp. Drink a hurricane. Take a cemetery tour. And if nothing else, walk on a levee. 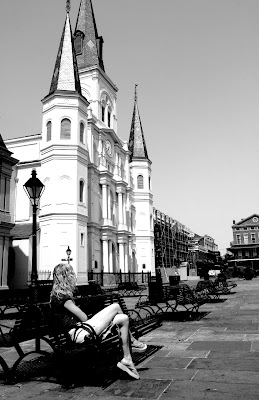 **"Joy to the World" by Hoyt Axton

Posted by Wendy Rodrigue Magnus at 5:00 AM