Musicians: A Series of Paintings

It’s spring in Louisiana, and that means seventy-degree weather, festivals, and live music. This weekend New Orleans hosts the French Quarter Festival, an annual free music festival throughout the oldest part of the city, and popular with both tourists and locals. Through the windows of our third floor bedroom in the Faubourg Marigny, we listened to our best local bands until late last night, and today, as I sit on our back porch composing this post, the music inspires me.

Music is an integral part of southwest Louisiana and its Cajun community and therefore an obvious subject for George Rodrigue, an artist who proposed forty years ago to “graphically interpret the Cajun culture.” Combine this concept with his love of Cajun and Country music along with his many musician friends, and the result is a major exhibition’s worth of musically themed paintings, especially when combined with his Jazz Fest and other Louisiana festival posters. 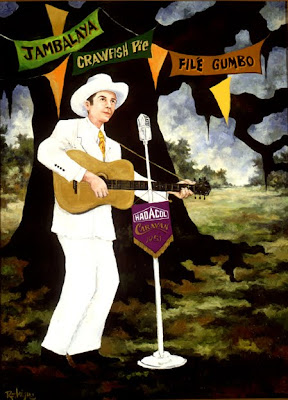 At the time, Hadacol was second only to Coca-Cola in advertising dollars in the United States, and its concerts, with the admission price of Hadacol box tops in lieu of tickets, did as much to promote stars such as Lucille Ball, Judy Garland, and Bob Hope as it did to promote the so-called medicine. (When George talks about Hadacol he often repeats Dudley LeBlanc’s line with a laugh: “He called it Hadacol because he had-to-call it somethin’!”)

George paints Hank (1923-1953) in the Cajun style he developed years before with the Aioli Dinner (1971), framing him within the tree, as though he is cut out and pasted onto Louisiana, and glowing like a ghost, similar to his portrait, The Kingfish, painted in 1980 of Governor Huey Long.

He painted Hank again in 1995, but this time with the Blue Dog, including some appropriate song lyrics. 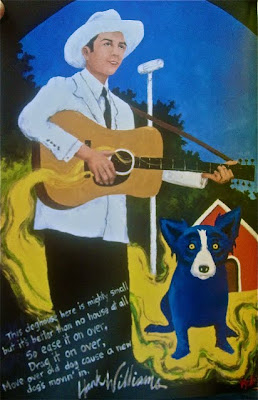 George does listen to Hank Williams as he paints, but more often he sings along to another favorite, Elvis Presley, pictured here with the gates of Graceland. (You Ain’t Nothin’ But a Blue Dog, 1996, 24x36, a painting amusingly similar to our wedding portrait from that same time) 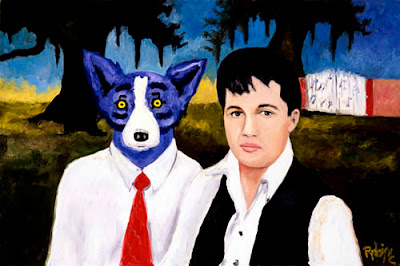 He also painted a life-size Elvis to join Hank Williams behind the bandstand at Café Tee George, a restaurant George opened in 1995 in Lafayette, Louisiana. However, unlike Hank, Elvis did not escape the flames, and the painting burned with the building in 1997. (I’m on the hunt for an old photo showing the painting at the restaurant).

Although the 1989 Hank Williams is his favorite, George’s paintings of musicians started much earlier. The first was the Breaux Bridge Band, a large canvas painted in 1971 just after the Aioli Dinner. 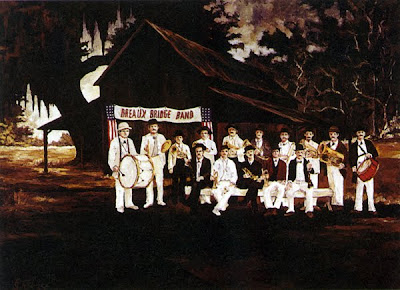 “The Breaux Bridge Band was a professional musicians’ organization, circa 1910, that played classical music not only in Louisiana but also in Mississippi, which at the time was a lengthy commute.

It was a period when most towns in America had city bands that played Sunday afternoon in the park at public bandstands.

I found a photograph of the band in an antique shop in Breaux Bridge. Over time I met people from the town who told me that their father or grandfather played in the band. It was important to them that I understand that the music was classical, and not Cajun or country.”

One of George’s favorite subjects in the 1970s was the Romero Brothers, who sat for years beneath the Evangeline Oak in St. Martinville, Louisiana, sharing their music daily with visitors of the famous tree. 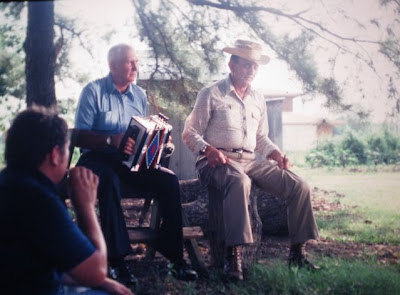 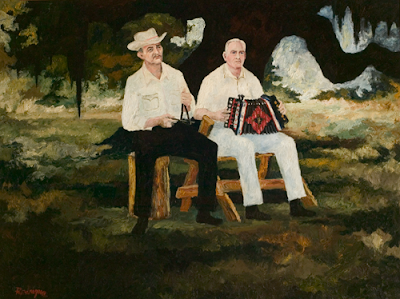 In 1984 George painted the Rayne-bo Ramblers, a tribute to the Cajun country band from Rayne, Louisiana, frog capital of the world. In the 1940s, Leroy “Happy Fats” LeBlanc formed the band with musicians Nathan Abshire and Alex Broussard. Happy Fats went on to become a major south Louisiana television personality in the 1950s after the first TV station opened in Lafayette. 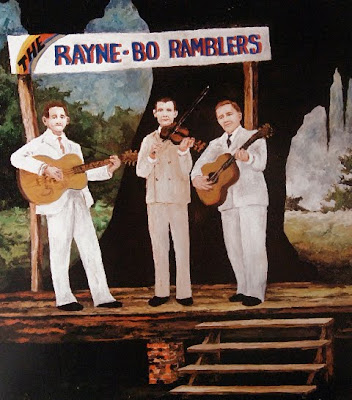 Other paintings from this period include Cajun Music Today, 1980, 40x30, 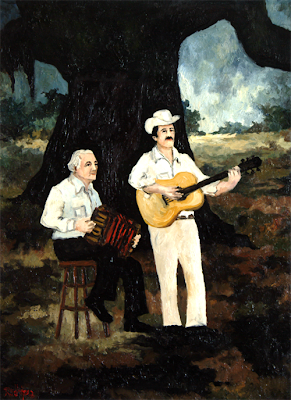 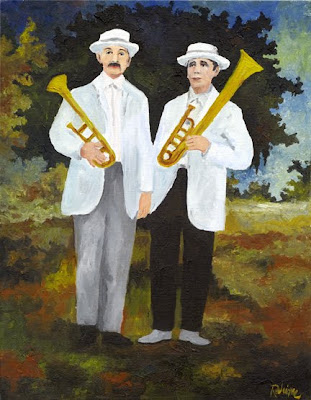 And Practice on a Sunday Afternoon, 1977, 30x40, featuring Cleoma Breaux and Joe Falcon (considered the first Cajun music recording stars; for more on their history and music see the story, Jolie Blonde). 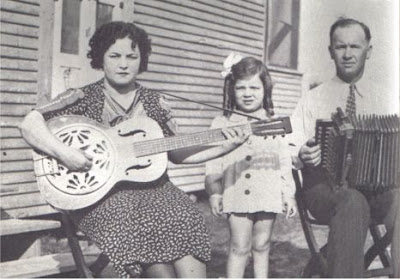 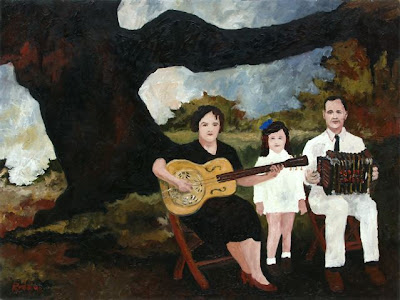 In the late 1980s and early 1990s, George continued these portraits, not only with Hank Williams pictured above, but also Clifton Chenier, 1985, 30x24, 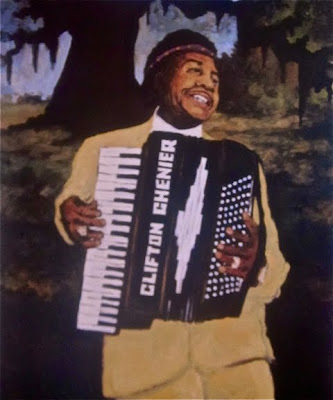 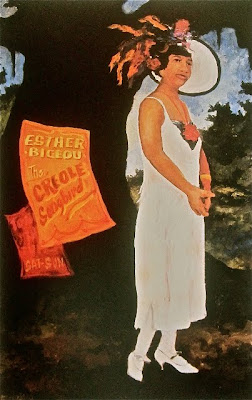 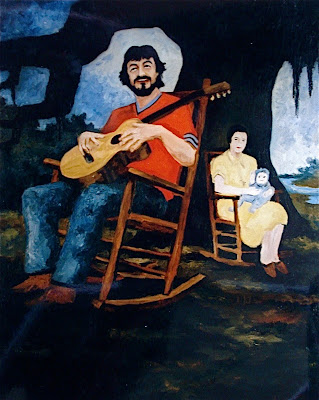 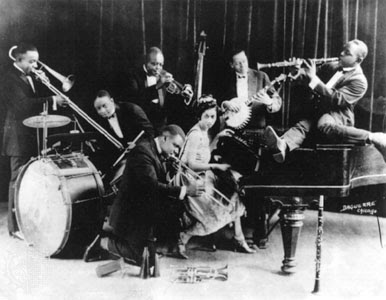 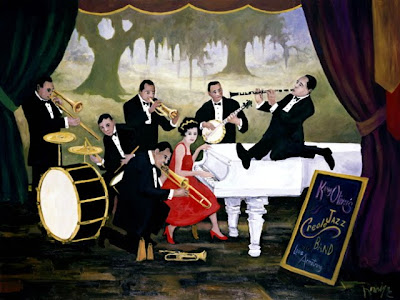 Diggs shot his photograph in Chicago, but George adapted the image to Louisiana, as though the musicians perform on a park bandstand beneath the oaks.

George was well into the Blue Dog Series by the time he created the works featured above, and so it’s not surprising that at one point the Blue Dog appears in his portraits of musicians. The most famous of these are from 1995, 1996, and 2000, paintings of Louis Armstrong, Pete Fountain, and Al Hirt for the New Orleans Jazz and Heritage Festival. This is a post (or two) on its own however, and I’ll post both photos and information on these works in the coming weeks to coincide with the Fest.

In the meantime, George’s original silkscreens, although without portraits, pay tribute to area music, such as You Ain’t Nothin’ But a Hound Dog, 2003, 22x27 inches, edition of 90, 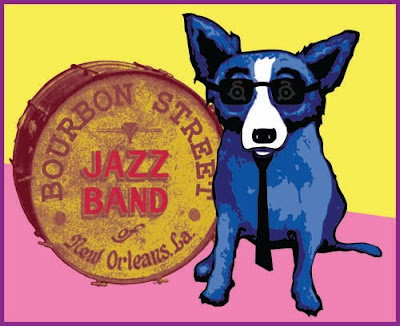 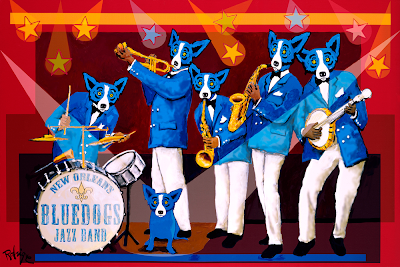 In addition, George painted both Hank Williams (as featured above) and Elvis with the Blue Dog, along with several versions of The Blues Brothers (My Blues Brothers, 1995, 24x30 and The Other Brother, 1997, 48x48). 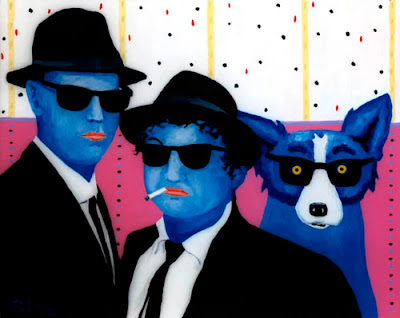 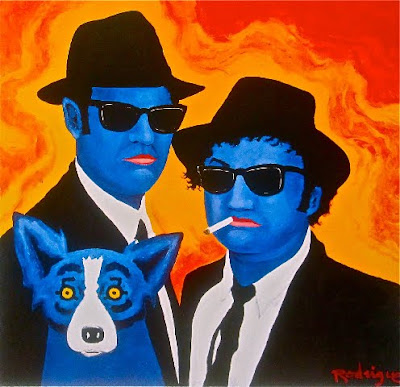 I leave you with an excerpt from the book The Art of George Rodrigue (Harry N. Abrams, New York, 2003), written by art historian Ginger Danto, reminding us of the variety, substance, and heart of these paintings (including the Fais-do-do, 1986, 48x120 inches):

“Between the heady folklore of the bayou with its apparitions, miracles, and magic, the ancestors who hover like disrespectful ghosts in any Louisiana household, and personages of plain or mythic profile, Rodrigue was not at a loss for subjects, representing fact or fiction or some portion of both, to occupy his composite scenery. His parade of individuals plucked from everyday life pose demurely for posterity, astride the yet un-severed worlds of the living and the long remembered.

Here is the local music trio, the Rayne-Bo Ramblers, in starched white suits, the curtain of their make-shift stage an oak; here are butchers in the white aprons of their trade, the silvery shafts of their cleavers hung from a chop block beneath an oak whose mossy trim mimetically tapers to knife points; here are the handsome baseball players, heroes in uniform; the fur trappers and fishermen; even derelicts and marginals; the schoolteachers and sweethearts; the daughters and fathers and brothers of families whose French surnames — Broussard, Arseneaux, Lejeune, Chassant — tell the long Acadian story in themselves.”

…and here’s George Rodrigue in Tupelo, Mississippi, at the birthplace of his hero. 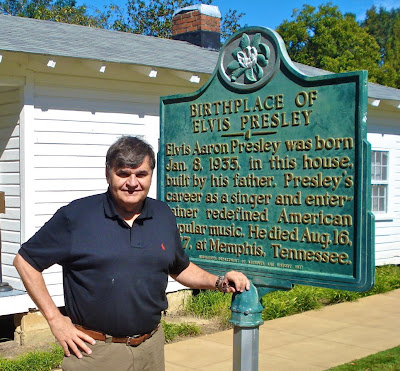 Posted by Wendy Rodrigue Magnus at 11:35 AM