In 1994 when first approached by ProCreations, the poster company for the New Orleans Jazz and Heritage Festival, George Rodrigue hesitated.

Up until this time Jazz Fest posters included only musicians that actually played at the Fest. Louis Armstrong died in 1971, the year after the first festival, and he did not get the chance to play at the park that would eventually bear his name: Louis Armstrong Park, formerly Beauregard Square, home to Jazz Fest its first two years until it moved to the Fairgrounds. The festival’s poster committee debated using Armstrong as a subject.

The Blue Dog, George felt, made no sense in a Jazz Fest poster. The Blue Dog is a strong image, front and center, painted like a person. He never intended to throw it in at the bottom of a composition, as a signature of sorts, making little sense in relation to the real subject.

The poster committee compromised. George could paint Louis Armstrong provided he include the Blue Dog. 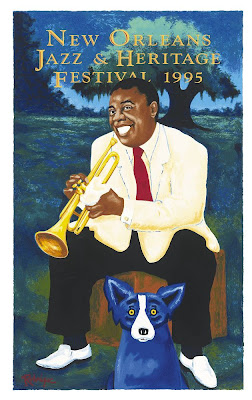 The next hiccup came after George finished the painting. He lost control of the poster, and the resulting changes, due to bump colors and other choices by the printer and committee, resulted in a silkscreen that differed greatly (to his eye) from his original painting, changes he accepted far better in 1995 than he did with his Pete Fountain poster of 1996.

(pictured, Pete Fountain and George Rodrigue with the original painting, collection of the New Orleans Museum of Art) 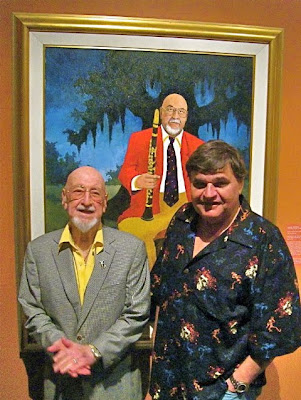 The 13,000 Louis Armstrong silkscreens turned out to be the most successful in Jazz Fest history, with the entire edition selling out before the second weekend.

I’d say that signifies a successful compromise! Don’t get me wrong: this is not a money-maker for the artist. George makes less money on creating a Jazz Fest poster than he does from the sale of one painting. But the promotional value is priceless and, frankly, so is the honor. After years of painting festival posters for small towns throughout the state of Louisiana, Jazz Fest gave George a vehicle to make it big for the first time ever in New Orleans.

So does the Blue Dog belong in a Jazz Fest poster?

Whenever George talks about painting another poster, that very subject comes up. Jazz Fest approached him several times over the years, but his attitude remains recalcitrant, and his answer a firm ‘no.’ For a while we tried to convince the public (as much as ourselves) that the Blue Dog is the Blues! It grew out of the New Orleans cultural scene, no different than the music.

But truth be told, its appearance in this poster doesn’t make much sense, especially if George is to retain the integrity he established behind this image. I mean, why throw the dog at the feet of someone in a poster, when its power comes from its eye-level stance? Better yet, think of it the other way around: the Blue Dog as the subject and Louis, or Pete, or Clinton, or Jindal as the small tiny shape at its feet. 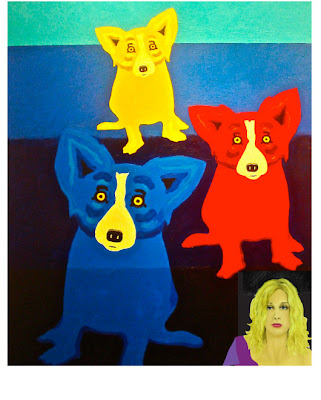 For those of you out there wondering if George feels trapped with the Blue Dog, I hope that after reading these blog posts you now have a better understanding of his disposition. It’s not the dog, but rather the “I want to be painted with the dog” that traps him. He does it, rather than not paint Louis Armstrong or the Governor or the President.

But to understand the real Rodrigue, the artist with total control, stop by the gallery. There, he paints only what he wants. There, the dog is King. 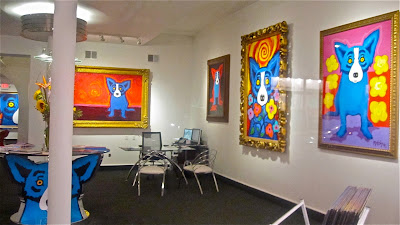 Following the success of the 1995 Jazz Fest poster, the ProCreations committee asked George to create a new poster for 1996. He hesitated again, worried that he might offend New Orleans artists, those folks vying for the exposure from producing the now-famous poster. But he gave in amid pressure and agreed to paint the great gospel singer, Mahalia Jackson. 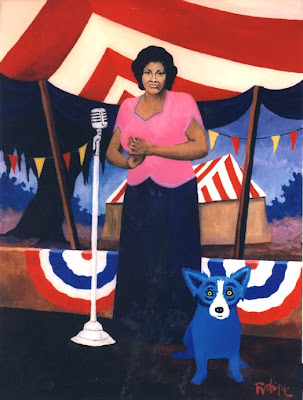 With plenty of lead-time, he spent more than a month on the painting during the fall of 1995 and did not learn until mid-December that her estate had not yet provided the necessary copyright permission. When they came up with a fee, ProCreations declined to pay, and George’s painting was relegated to the closet. (Ironically, Jazz Fest and the estate obviously worked this out at one point when artist James Michalopoulos painted Jackson for the 2003 poster.)

"Either I paint my friend Pete Fountain, or you’re without a Jazz Fest poster."

To their credit, ProCreations agreed immediately. On Christmas Eve 2005, George painted all night, throughout Christmas Day and the day after, so that the poster could go to print on the 27th, in time to make the festival deadline.

ProCreations altered the poster dramatically, eventually scanning an actual photograph of Fountain’s face over George’s painted version. As if this change, after the Mahalia Jackson fiasco and the short deadline was not enough, local artists picketed the door of the Rodrigue Gallery, furious that George again created a Jazz Fest poster, in their opinion (according to their picket signs) depriving one of them of the opportunity.

This was a tough blow for George. He was shocked, even devastated, by this response from local artists. Yet he enjoyed the experience of painting Pete Fountain, a man he’d known and respected for many years. 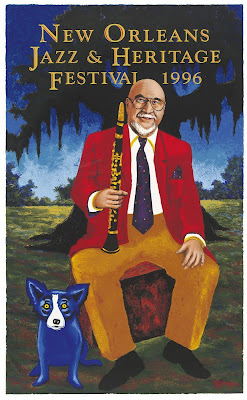 If you ask George, he’ll tell you that of his three (or four, if you count Mahalia) Jazz Fest posters, this is his favorite ---- not the poster itself, but rather the honor of painting a good friend, a man he admires for both his talent and his person. (pictured, George and Pete signing books at the New Orleans Museum of Art, 2008) 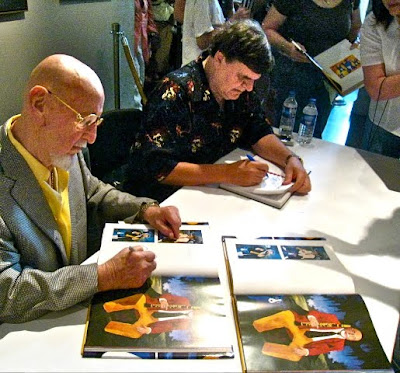 Even today George and Pete work together to raise funds for the Christian Brothers Foundation, located in City Park in New Orleans, brought together by their mutual friend, Brother Edward Scanlan. (George Rodrigue, Pete Fountain, Brother Edward Scanlan, with a donation of Rodrigue's Evangeline for the Christian Brothers Foundation, 1975) 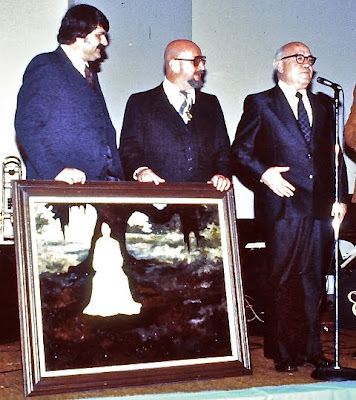 Each year Pete headlines an event for the Christian Brothers School, where he visits with the crowd, plays his clarinet, and even (on occasion) raises his shirt to show the ship tattoo rolling along the waves of his stomach. He’s a character, to be sure, as well as a brilliant musician and the kindest of men, and painting him, knowing him is for George one of the best experiences of his life. (pictured, 'Louisiana Man' Doug Kershaw, Pete Fountain, Wendy and George Rodrigue at an event for the Christian Brothers School, City Park, New Orleans, 2008) 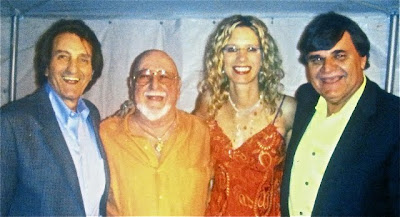 In 1997 Jazz Fest came calling again, but George declined. The picketing artists resonated for him, a man who started with “a nickel and a paintbrush” and is appalled by the idea that he might deprive another artist of their ‘big break.’

It was in 2000 that he again agreed to a Jazz Fest poster, his third and final, after swearing that he would never do another. The unforeseen scenario is better saved for the next blog, as are George’s ideas on how Jazz Fest should select its artists, as well as his choices for the best posters.

Read the rest of the story here...