Musical Memories: A Stream of Consciousness

Stories about music lead to obscure references to Rodrigue paintings

As we all know, music inspires nostalgia. I have no photograph of it, but in perhaps my earliest memory I’m sitting on the floor of my bedroom with my dad, newly home from flying, singing along to Neil Diamond and roaring, “Hey, hey, hey, ba ba la dinga, hey! I AM THE LION!”

I was reminded of it last night as George and I watched the movie Julie and Julia, and Julie Powell learns that Julia Child reacted unfavorably to her blog:

“You see George? That’s why I don’t want to meet Neil Diamond. I mean, if anything goes wrong, my memories come crashing down.”

If you saw the movie, you know that Julie holds up just fine, clinging to the Julia-in-her-head. But George agrees that this approach would never work for me. For the same reason I hid in the back of the room while he stood in line to ask Shirley Ann Grau to autograph my first edition of Keepers of the House (after I dragged him to her lecture just so I could meet her), I’ll never accept a Neil Diamond backstage pass …not that it’s forthcoming. (pictured, Shirley Ann Grau, from Paintings for the Flora Levy Lecture Series, 1983, 30x40) 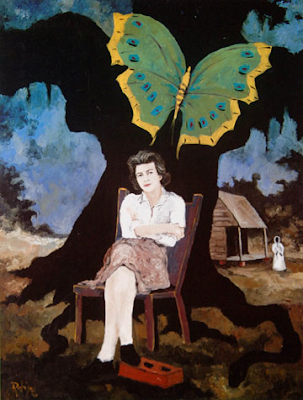 “Come to think of it,” I told him, “it’s remarkable that I ever said a word to you.”

Movie stars don’t affect me this way, but my favorite musicians, writers, and artists tend to leave me star struck.

George has tried to break me of this creative-hero worship for years. In one instance he drew a fake tattoo, an elaborate Cajun and Blue Dog scene, on my back with a sharpie to catch Steven Tyler’s eye at an Aerosmith concert. I’m red in the face even now as I write about it. 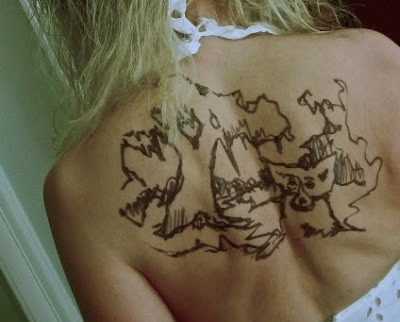 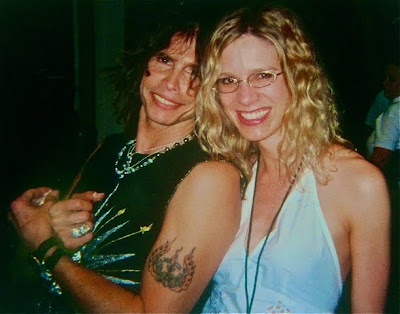 The first time I remember hearing Cajun music, well actually Zydeco, was the summer of 1989. Somehow I discovered Wayne Toups and Blast From the Bayou. I sang “Sweet Jolene” at the top of my lungs, faking my way through the French and unable to hold still, dancing away the time in Okaloosa Island bridge traffic on my college break.

My friends, more interested in Madonna’s “Like a Prayer,” didn’t get it, and so I felt like this ‘ZydeCajun’ was mine. I’d never been anywhere in Cajun country, and the closest I’d ever gotten to Lafayette was driving I-10 on my way home from college in San Antonio (unless you count a high school summer romance in Fort Walton Beach with a boy named Hebert, pronounced ‘A Bear’). 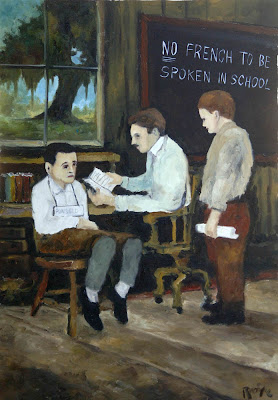 Yet I sang “Goin’ Back to Big Mamou” as though I knew the place, a song performed by Toups, the son of a French-speaking rice farmer in Crowley, Louisiana, a small town where ‘life is rice and easy,’ and a place that’s produced more interesting folks than seems possible, including the subjects of several Rodrigue paintings: former Louisiana Governor Edwin Edwards, early Cajun music recording star Cleoma Breaux, and one of my dearest friends Nancy de la Houssaye Broadhurst. (pictured here with her sisters in George’s painting from 1987) 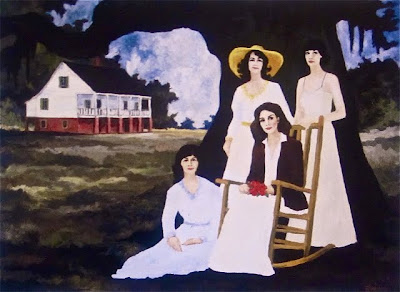 I could not have known that eight years later I would stand like a subject in a George Rodrigue painting and marry a Cajun artist under an oak tree, or that we would waltz as newlyweds to “Jolie Blonde,” performed at our reception by Hadley Castille and the Sharecropper’s Band. (pictured, Cajun Bride of Oak Alley, 1974, 24x32) 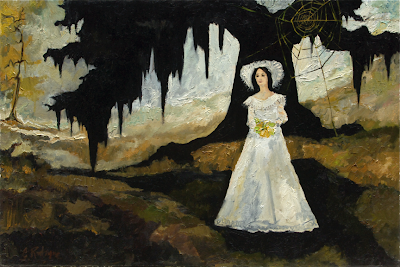 And what about our song? Ironically, it’s not Cajun, contemporary, or traditionally romantic. We chose it long before our wedding, by accident and over time. It started with the musical Man of La Mancha, which we first saw together in 1994 at a theater in Chicago, with John Cullum playing Don Quixote.

Haunted by the music, we purchased the movie soon after, starring Peter O’Toole and Sophia Loren. We’ve watched it countless times over the years, and the soundtrack is a favorite on our cross-country drives. One song, “The Impossible Dream,” stands out, and I daresay we’re unique among couples in our choice.

Very late one night in 1996 we awoke at George’s camp on the Atchafalaya Basin to the sound of crickets. We tiptoed in our nightclothes along the boardwalk through the cypress trees and to the water’s edge. Wide-awake and surrounded by the swamp we watched the water in silence as an alligator swam towards us in the moon’s reflection. When it rustled the leaves on the bank just below our bare feet, we turned and ran, laughing and out of breath as we reached the cabin. (pictured, oil on canvas, 2009, 15x30) 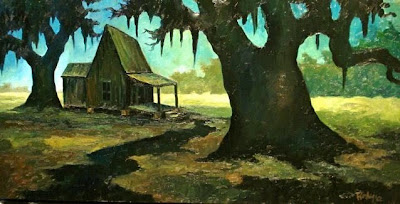 Unable to sleep, we danced in the dark to “The Impossible Dream,” to this message of following, without waver, the truth in one’s heart, a noble pursuit far larger than our small romance and yet a mutual understanding regarding each other’s distinct independence and the importance of helping each other (and others) follow our dreams. It’s been our song ever since.

“And I know if I’ll only be true, to this glorious quest,

That my heart will lie peaceful and calm,

When I’m laid to my rest…

And the world will be better for this:

That one man, scorned and covered with scars,

Still strove, with his last ounce of courage, 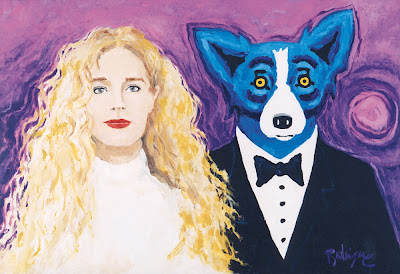 *from the song “The Impossible Dream,” written by Joe Darion for the musical Man of La Mancha