During the summer of 2005, George Rodrigue and I joined his collectors Chris and Don Sanders in Europe for the Venice Biennale and Art Basel. Although we attended in the past, this was our first visit with the ‘in-crowd,’ and our group consisted of major gallery owners and big time art collectors, certainly well beyond our league in both areas, as a self-representing artist and avid collectors of works created by some famous and many not-so-famous artist friends (with a few notable exceptions such as Andy Warhol, Robert Indiana, and Chuck Close, all of whom we collect but have never met).

A collection is interesting when it reflects the tastes of its owner (as opposed to a decorator or art consultant, for example). French art critic Philippe Jullian wrote in his rather pompous, yet witty account, The Collectors, in 1967:

“The collector of modern art is less easy prey to the decorators (except in the U.S.A.) than the collector of antique art; he is too soon swamped in expense to worry about the balance of a panel or the matching of a curtain.”

I recall one collector on that trip expounding at dinner on his passion for Jeff Koons’ appropriated sculpture Vacuum Cleaner that hangs on his living room wall.

Here’s an example from a Christie’s auction from 1997, where the Hoovers brought $12 million. From their catalogue:

“Enshrined in transparent temple-like cases as if they were strange anthropomorphic beings worthy of veneration, these mundane and familiar objects seemed to have been transformed into the bearers of some sacred message or mysterious level of meaning.” 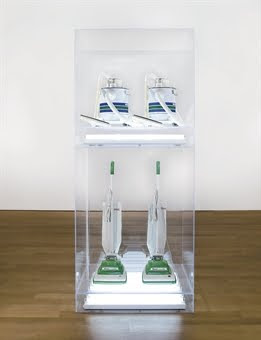 This is the second generation, I suppose, of the collectors of Duchamp’s Fountain, a piece and concept George and I both find brilliant, even as we search for meaning in the Hoovers beyond Fountain knock-offs or a constant reminder to clean the house. 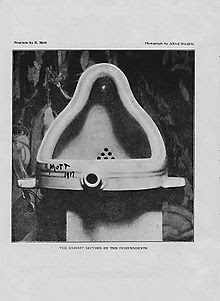 Pictured above, Fountain, 1917, by Marcel Duchamp, signed “R. Mutt,” and photographed by Alfred Stieglitz while on exhibition in his 291 Gallery in New York. Also interesting is that the original was lost, and so Duchamp created ‘replicas’ (for lack of a better word here, since he didn’t actually make the urinals himself) in multiples in the 1960s.

We all listened with interest to this collector’s passion for his Hoovers, knowing he paid millions of dollars for a statement, for a slice of art history, for household vacuum cleaners, and for the fun of bragging about it.

Arguments of wasting money and all the meaningful causes of where it could be spent aside (let’s face it, art is a luxury item; it’s the first thing to go in a recession and the last to bounce back), this glimpse into the serious art world was fascinating. I mean, $12 million for a Vacuum Cleaner? $100,000 for a Blue Dog? Take a step back and it’s ludicrous! Time to raise prices, George mumbled…

Our hosts on that artsy trip, Chris and Don Sanders, are passionate collectors. George and I tagged along as they added works by Wesselmann, Gormley, and Rauschenberg to their collection.

We first met them when they bought a painting at the Rodrigue Gallery in Carmel, California in 1997. They formed their collection with enthusiasm and were among the first to purchase numerous Blue Dog paintings over time. Our French critic, Philippe Jullian, weighs in on this type of collecting as well:

“The best of them regret not being creators and participate in creation by encouraging it; a few great collectors are thus inseparable from the great painters they were the first to buy.”

Eventually our curiosity got the best of us, and we accepted the Sanders’ invitation to view their art in Houston, Texas. Since that time we’ve grown close as friends, enjoying this common interest in the arts. Earlier this week, in fact, we spent a few days with them in Houston, where a documentarian filmed George and Don for an in-depth piece on the Sanders’ collection, specifically Don’s corporate collection for his investment firm, Sanders, Morris, Harris. 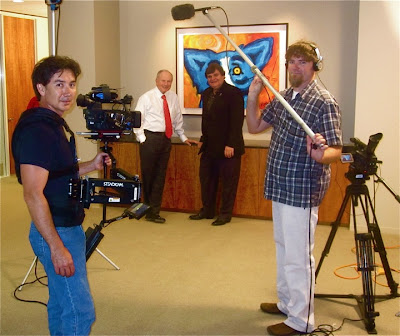 Rodrigue paintings share the office walls with other contemporary artists, including one of my favorites, John Chamberlain (b. 1927), a sculptor known for expertly crushing car metal. I remember reading somewhere that it’s not unusual for folks to follow him around his hometown of Shelter Island, New York, waiting for him to crush and toss his paper coffee cup, which they retrieve and save for his signature because ‘nobody crumples like Chamberlain.’

(pictured, Don Sanders and George Rodrigue; a wall sculpture by John Chamberlain on the left; a Blue Dog by Rodrigue on the right) 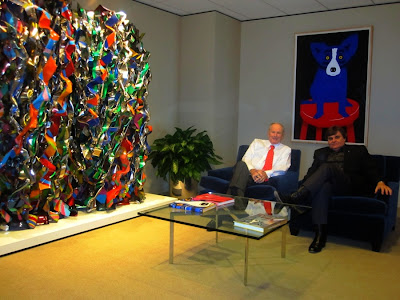 Back home, Chris and Don display their collection within a large loft space in downtown Houston.

(pictured from left, ladder by Stephen Dean; Rodrigue paintings from the abstract period; sculptures by Frank Stella and Antony Gormley) 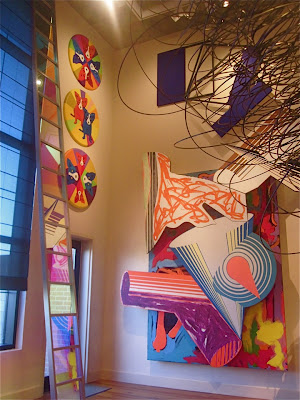 Their Rodrigue paintings span nearly two decades, a period of time during which George’s art changed dramatically (see the Blue Dog links under “Popular Musings” to the right of this post). And yet, they managed to find pieces within George’s evolving series that compliment their specific and contemporary taste for hard edges, large blocks of strong color, and abstract design.

During the documentary filming, George half-joked,

“Don is like a King, a Pope, the Medicis --- all great patrons of the arts, without which we wouldn’t have half of the paintings in the Louvre!”

The art takes on new meaning within the context of a collector’s eye:

“[The household] is a masterpiece, less because it is full of masterpieces than for the manner in which they have been chosen, arranged, loved.” (Philippe Jullian, 1967) 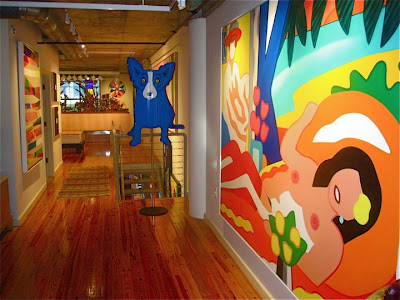 For George and I, this means that everything is personal and tells a story. For an outsider, the works in our collection may not relate visually in an obvious way. It takes one of us to walk through the house and expound on each work’s history before the collection comes alive as a unit.

Yet for Chris and Don, although they are not without their art adventures and stories, their collection is visually unified. I don’t think I’m too presumptuous in saying, in fact, that I could walk through a gallery or art fair and predict their taste, possibly even their next purchase. 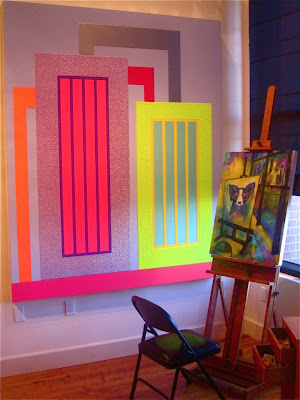 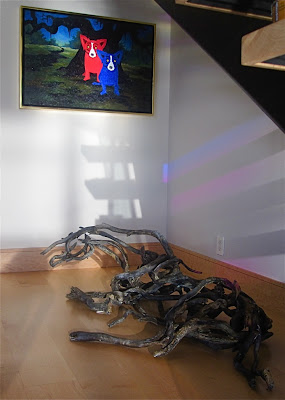 George feels honored to hang on the Sanders’ walls, as well as within several other important private and public collections. But truth be told, he’s just as honored when his work hangs as a Jazz Fest poster, amidst school art projects, in the home of a young family, or in the form of a postcard on the refrigerator of, well, anybody. For that matter, he says, it would please him to see his paintings hanging under a bridge, recalling a story I’ve often told about a Gustav Klimt sketch I spied in a San Francisco gallery during my first visit to California back in 1991, when I was just out of graduate school:

It was $20,000, and I added up on paper the value of everything I owned, concluding that if I sold it all, I could live under a bridge with my sketch. The truth, the honest truth, is that I considered it…

What I wouldn’t give today for that pencil drawing of a woman; however, I feel somewhat redeemed since making an unexpected purchase several years ago. I took the money from the sale of my mother’s house and turned it into an original painting/collage by Friedrich Hundertwasser, an artist I fell in love with one day in 1988 when my mother visited me in Vienna, and whose painting I acquired through Sotheby’s London as George hung over my shoulder, just as nervous and excited as me, while I bid on the phone at three o’clock in the morning. Ludicrous art world, indeed!

We collectors are an eccentric, passionate bunch. George is correct: if it weren’t for ‘King Don’ and others like him, the world would have even fewer artists creating fewer masterpieces for fewer museums. One could debate this importance, the value of art, all day; however, this is not the place, so I will leave my premise without explanation.

I will end, however, with a few last wise words from our French art critic, Philippe Julian:

“Artists’ wives are a pest.” 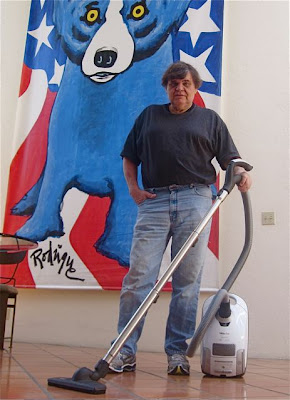