The Painting in the Closet

It's a common misconception that George Rodrigue intends all of his art for sale, or at least for public display. If he manufactured tennis shoes, this might make sense, and indeed because George makes a living with his art, it is true that most works do end up with a price tag.

However, this commercialism is by no means all-inclusive. I’ve tried throughout this blog to emphasize George’s love of painting, of actually applying paint to canvas, as well as pursuing his creative impulses regardless of public opinion. Had he listened to the public or even to his friends and family, there would be no dark landscapes, no Cajuns, and certainly no blue dog.

Although George’s paintings for the most part are accessible, there are countless other projects that remain in the closet, so to speak. He jumps out of the shower periodically and says,

“Quick Wendy, write this down. I just wrote a movie.”

Or he spends an entire night with pencil and tracing paper, designing every detail of some imaginary car.

Yet he’s not in touch with TriStar Pictures or Ford Motor Company. Instead these projects, the most important thing in the world to him for a few hours or even a few days, end up buried at the bottom of the pile on his desk or tacked to the wall in his studio or rolled up with a rubber band in my keepsake box, all destined for the archives at some organized point down the road.

Paintings end up in the closet for various reasons.

Recently in the post The Nude Figure I shared with you a few of the rejected originals from Bodies.

But just because a painting never hangs on the gallery’s wall does not mean that it’s a failure. To the contrary, some of George’s most poignant works are those that he never intended for sale or public viewing.

For example, he painted No More Dukes in 1996 following former Ku Klux Klan Grand Wizard David Duke’s announcement of his campaign for the U.S. Senate. After it sat twelve years in the closet, George loaned the painting for public display for the first time in 2008, during the exhibition Rodrigue’s Louisiana at the New Orleans Museum of Art. 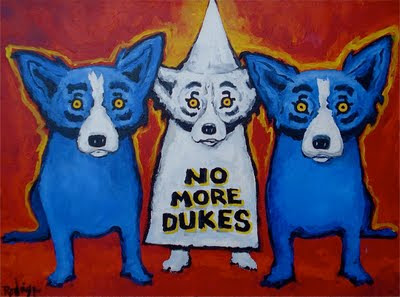 Following a frustrating look at contemporary art during Art Basel and the Venice Biennale in 2005, he drew Where is the Art World?, a sketch (48x36, pictured below) he kept for himself and a design he reluctantly offered for sale in a print form, after relentless pleading on my part. 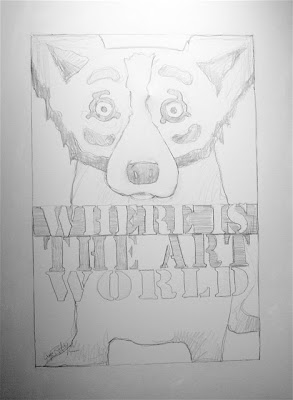 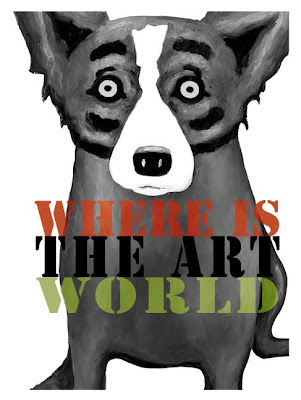 Most recently, he created a series of images related to the oil spill in the Gulf of Mexico. He stayed up nights adjusting these designs for no one but himself, knowing that this was a cause beyond his reach. 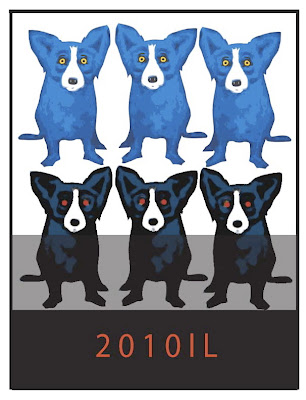 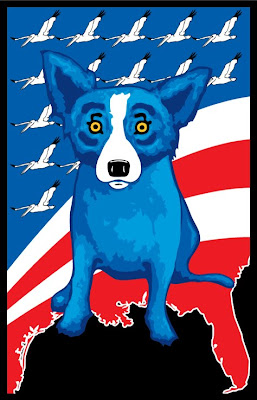 (I know it’s hard for some of you to understand George’s reluctance to raise money with these works, particularly in the face of not only an environmental tragedy, but even more so the loss of eleven lives, the suffering of eleven families. In the past month, the shrimp industry, a coastal parish government, environmental organizations, and even the oil industry approached him for a print benefiting their cause. This is a political monster he cannot address, and his efforts regarding non-profits are fully committed these days to another cause close to his heart and within his control, integrating the arts into all areas of childhood education through the George Rodrigue Foundation of the Arts.)

Most pieces, without question, remain NFS because they’re personal:

A gift for me 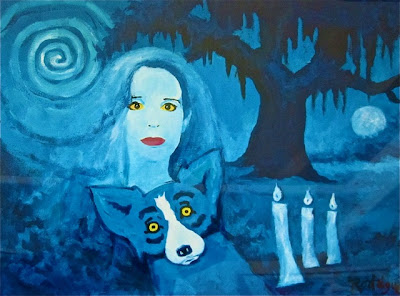 A perfect (planned) fit over our fireplace 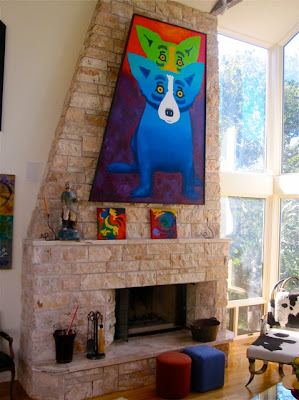 A Vargas tribute (a gift for his son Jacques, pictured; Rodrigue’s Indians, Cajuns, and Cowboys from 1987 hangs on the wall, and his wine label for Heidi Barrett’s Amuse Bouche Wine is on the bar) 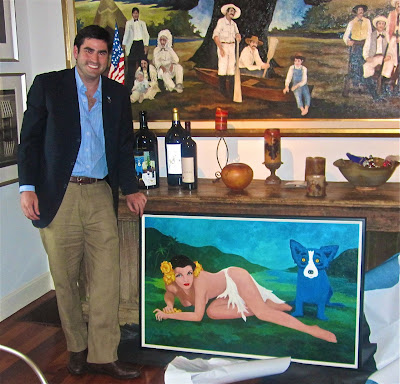 And countless photographs, pieces that to George’s mind are some of his best works but which, I suspect, he doesn’t display partly because he hasn’t the energy (yet) for the questions and skepticism that might accompany such an exhibition. (Wendy and Hunt at Albania Plantation, photographed by George Rodrigue) 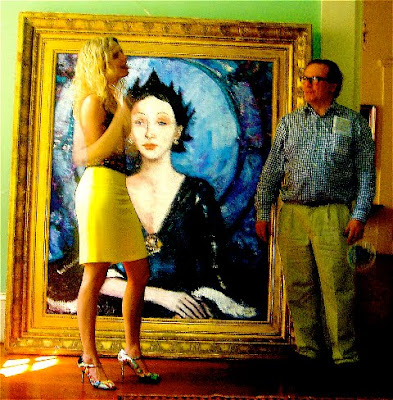 Fortunately this blog is a great venue for just such an exhibit, and I look forward to sharing some of George’s favorite images from the closet in a series of photography posts this summer.