It may surprise you to know that we do not have a dog. In fact, George Rodrigue has not had a dog since Tiffany, an unwitting participant in the Blue Dog Series, died in 1980.

He's had several dogs over his lifetime, beginning with Lady and Trixie in 1950s New Iberia. However, it’s never been a priority for George to own a pet. He travels often, and he understands the responsibility that goes with such an undertaking.

Although I wouldn’t really call him a ‘dog person,’ it wasn’t until I came along that he even glanced at a cat:

“I hate cats,” he told me when he met my Romeo and Miss Kitty in Carmel, California in the early 1990s. 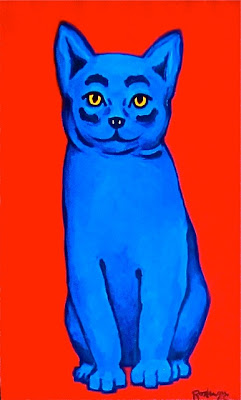 And indeed, when we married and moved to Lafayette, Louisiana in 1997, my two kitties went on to live with my friend Sandra (who works today at the Rodrigue Gallery, New Orleans), a mother to cats everywhere, as though a giant catnip toy hangs from her roof, along with a blinking sign:

It was September that same year, as George and I made our nightly power walk around our circle in Bendel Gardens, that a kitten, barely weaned, came out of nowhere and tried to keep up.

I turned around, resulting in a minor newlywed spat:

“Keep on walking, Wendy. Don’t look at the cat!”

But she followed us, falling behind and then running to catch our heels, even as George grumbled and threatened me with his glances. When we reached our long driveway and slowed our pace, she slowed hers as well, and when we opened the kitchen door, she ran between our legs and into the house.

Why this was my fault, I’ll never know, but over the following week, after dozens of fliers and knocking on doors, I learned a great deal about how to keep the peace in my marriage and still get my way. We called her Diana, after the Princess who had lost her life two weeks before.

Over the years, George grew attached to Diana, although he denied it every chance he got. I knew I had him when late one night after she didn’t come home, he leaped out of bed and into the back yard in his underwear at the sound of cat screams and fought off an excited tom with the garden hose. 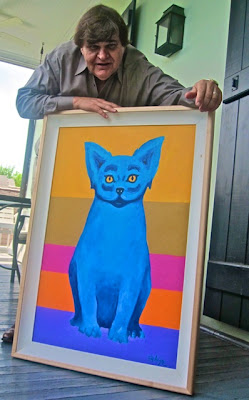 Diana’s been gone for a few years now; however, even today, when people ask him about her, George says,

“She was different. Not a cat at all, really.”

He never did paint her, nor did I ask him. I learned long ago the fruitlessness of approaching George with an art request. As his family, I should know better than to invade that personal space, that creative mind that lives to approach his canvas with freedom and nothing between his own thoughts and his paint.

But I overhear others ask him,

“Why don’t you paint cats?”

He’s answered the question many times over the years, so I have a pretty good understanding. Basically, it’s a problem with shape. Remember, even if you go all the way back to George’s oak trees, he focused on shape and design above all else. He’s admired today as a landscape artist and yet it’s ironic, because his oaks bear little resemblance to the actual trunks and branches of south Louisiana. He created a design and shape utterly his own, just as he did with Jolie Blonde, the Hurricanes, and the Blue Dog.

A cat, George says, no matter how you stylize it or exaggerate it, is not an interesting shape:

“The head is too small!”


This doesn’t mean that he hasn’t experimented over the years. To date, there are exactly six paintings, two silkscreens, and one poster of cats by George Rodrigue, and they are all featured in this blog post. They range in date between 1993 and 2010, so it should be obvious that he felt no big rush to paint a cat. 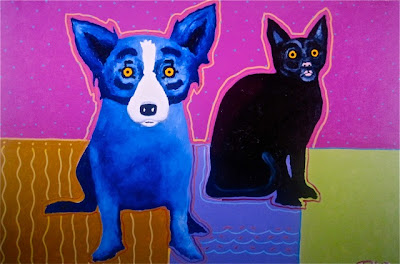 In 1997 George painted a cat with the Blue Dog for a poster called Friendship, benefiting the Broward County Humane Society. (Even though this cat looks nothing like her, I like to think that Diana played a role in this one-) 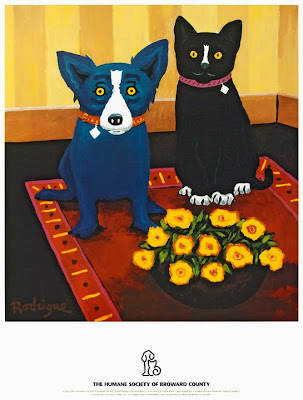 And just this year he painted Cat Tie, an original painting that raised $180,000 for Friends For Life, the first no-kill animal shelter in the city of Houston, Texas. 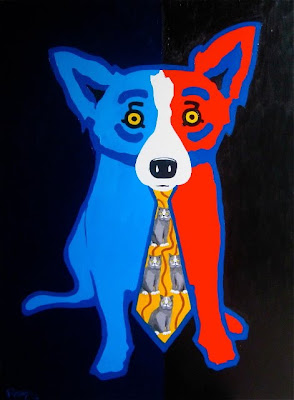 George’s friend, collector, and cat-lover Don Sanders waits in the wings, with hopes that any day now George will make the Blue Dog-to-Cat shift, but I think he knows deep down that he’ll be waiting forever. In the meantime Don, George says, makes the cat paintings look good, like this installation in his Houston office, featuring Cool Cat from 1998, along with George’s Blue Lady from 2005 and a Blue Dog Pilgrim Glass vase of 1995. 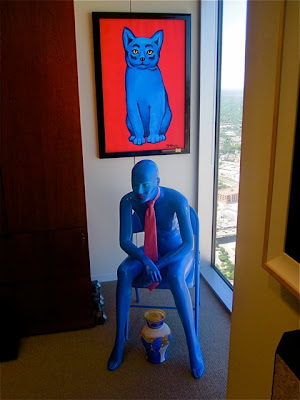 George painted Dream World this year, a large painting of 30x40 inches, and based his silkscreen The Three Amigos on the image to jumpstart his programs for arts integration in education, The George Rodrigue Foundation of the Arts. 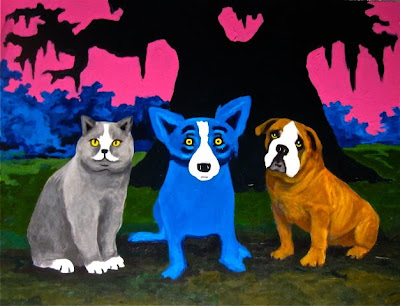 In 2007 he painted Friendly Cats, a painting inspired by his latest children’s book, Are You Blue Dog’s Friend? (published in 2009 by Harry N. Abrams, New York). 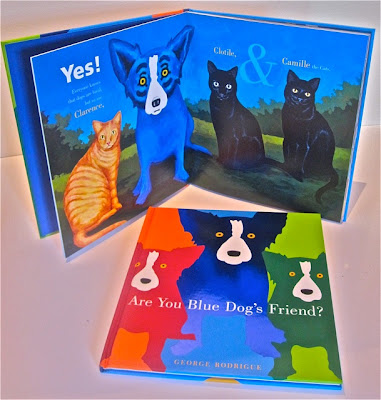 Perhaps his most popular cat image is the silkscreen Mardi Gras Cats (from 1997, the year of Diana). However, while the cats embody Carnival with their colors, it’s the Blue Dog that gives strength to the design. 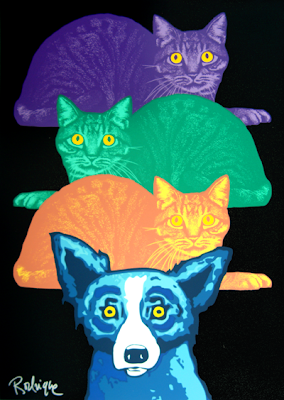 So will George paint another cat? Oh, probably. But in all likelihood it will remain a secondary design element, something naturally juxtaposed to the Blue Dog.

Just last week George’s son Jacques, who lives in the house behind ours in New Orleans, opened his door to find a five-week old, one-eyed kitten curled on his stoop. He took her in and called her ‘Schnickahs’ (something about Jersey Shore) and she hung out with us around the pool on Father’s Day. 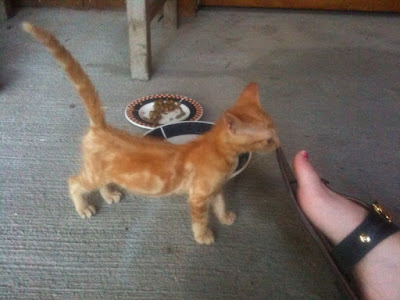 As expected, George made a big production while he ignored the cat, complained about his allergies, and suggested we dunk her in the pool for fear of fleas. But I saw the real George when he thought no one was looking. He picked her up ever so gently and whispered in her ear:

“Don’t worry, One-Eyed Jackie, we’ll get you a patch-“

For more on Diana, read about the Hurricane Paintings-

For more art and discussion, please join me on facebook-