Following the chaos of Hurricane Katrina in 2005, George Rodrigue shifted his attention from Bodies, a collection of paintings and remastered digital prints focused on the female nude, to Blue Dog Relief.

The New Orleans gallery reopened in January of 2006; however, the positive nature of George’s paintings seemed out of place. Our staff worked overtime selling Blue Dog Relief prints, including We Will Rise Again, raising more than $2 million benefiting local causes. Life before the storm, both in and out of the gallery, seemed blurry and miles away. Everything was different. There were no tourists, no one walking in the French Quarter. And no one, including George, our staff, and the public cared about paintings, especially anything dated (and forever described as) ‘before the storm.’ (pictured, Where Are We Going? 2006) 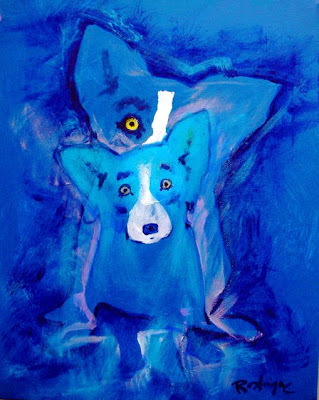 It was almost a year before George returned to his easel, and when he did, the fragmented, dark canvases indicated a strong departure from the controlled, deliberate, hard edge shapes of not only Bodies, but also earlier Blue Dog and Cajun works. These new paintings, also called The Dream Series, lack definition, as though the Blue Dog, just like the rest of George’s world, exploded into chaos and unpredictability.

(pictured, Last Night I Went Looking for Myself; We Are Lost Together; You Would Think We Are the Same) 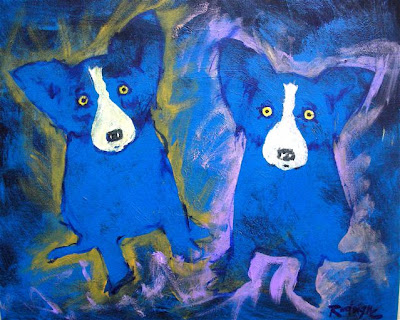 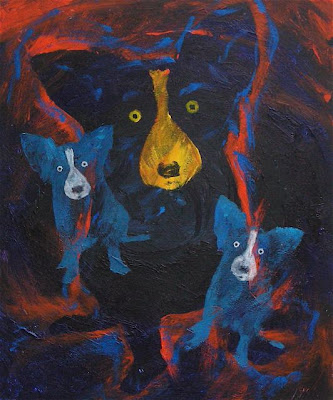 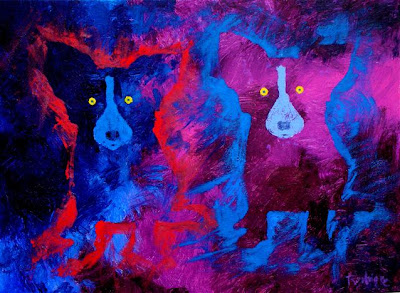 He painted these works in Carmel, California, where we remained for several months awaiting repairs on our home and George’s studio in New Orleans. George often says that he approaches his canvas without any preconceived ideas. He may know that his painting will involve a Blue Dog, but beyond that he remains open to creative spontaneity, sometimes surprising even himself. (pictured, Ice Me Down; Five of a Kind) 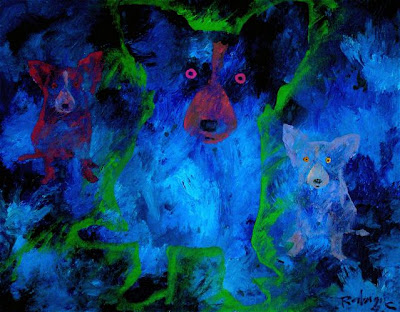 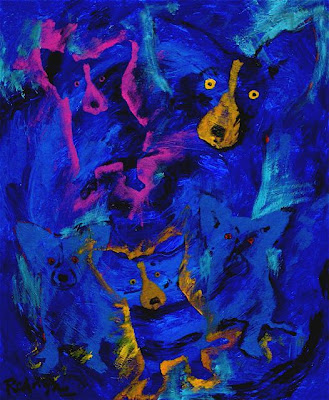 As with God Bless America following September 11th (coming in a post this September), the Blue Dog seemed out of place amidst George’s depression over the widespread misery and devastation back home. His world’s upheaval translated to his canvas, and changes to the Blue Dog reflected changes in his own life. (pictured, Voodoo Nights) 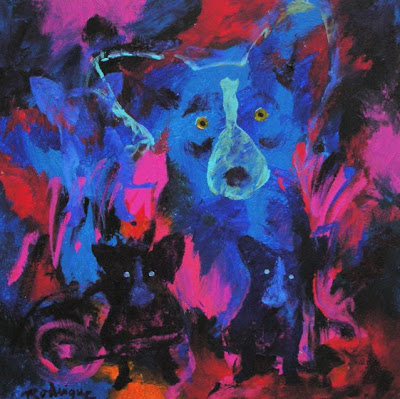 It’s interesting to note the difference between these dark, mysterious canvases and the Hurricane Series of 2002-3. Celebrating the energy of Mother Nature, the abstract and colorful Hurricanes practically mock George’s post-Katrina mood. (pictured, Lilli, 2002, 36 inch diameter, oil on canvas) 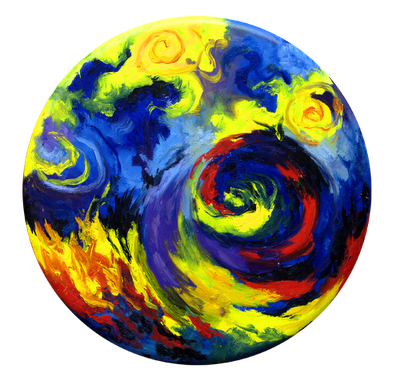 For more on the series Hurricanes, visit here.

Although the twenty or so dark paintings of 2006-7 ended up on the gallery walls, one remains in our private collection. The painting Black Magic (2006, 24x24 inches, pictured below) hangs in our home, a reminder of old feelings even now, when we believe we’ve moved on, or when we save watching Treme for another day, because sometimes the painting is enough, and we can't handle the specific memories. 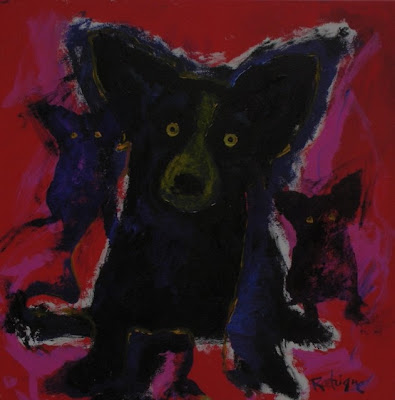 Eventually George’s artwork shifts again. He transitions from his initial fragmented post-Katrina paintings to a more defined Blue Dog, and yet still avoids the hard edge of his earlier works. (pictured, I Am an Artist, 2006, 28x22 inches) 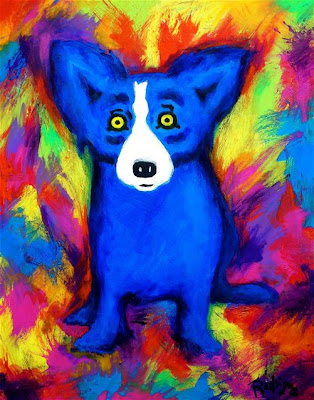 These paintings, among my favorites of the entire Blue Dog series, speak of cautious optimism, as though the Blue Dog pulls itself together on canvas even as George dares to believe that New Orleans will pull through. (pictured, You're the Only One Under the Sun; Summer of '06; You Got Problems?) 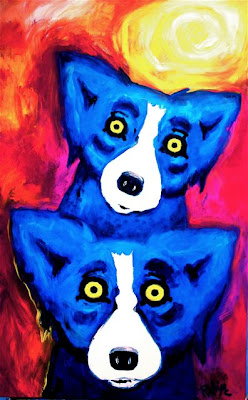 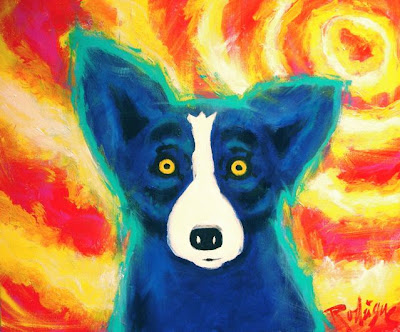 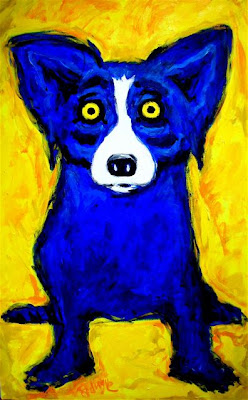 However, some days were worse than others, and George’s shifting moods, imperceptible before or since in this steadily down-to-earth, good-natured man, continued within his work. (pictured, It Was a Bad Night; A Down Deep Blue Midnight) 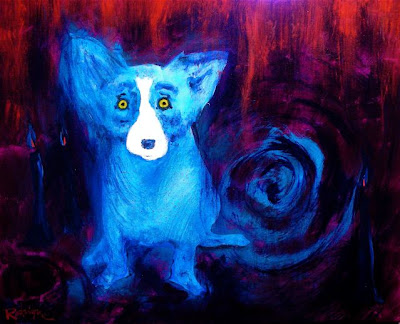 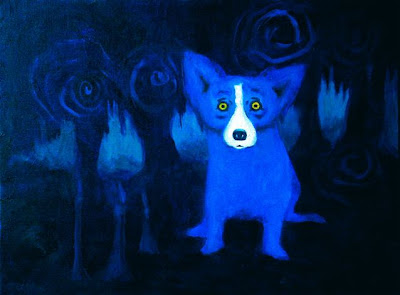 Finally, this period also saw George’s return to the landscape. He called his first post-Katrina show ‘Back to the Bayou’ and filled it with soft lines, yet intensely blue Louisiana scenes. Although quintessentially 'Rodrigue' with the oaks cut off at the top and the light glowing beneath the branches, these paintings differ greatly from his traditional landscapes. (pictured, The Blue Yonder; The Blues Come in the Morning) 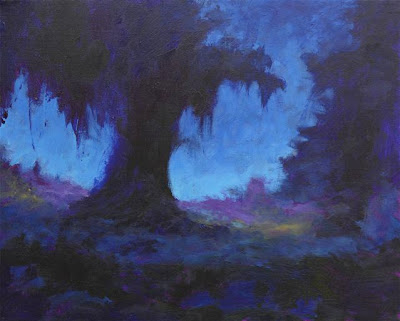 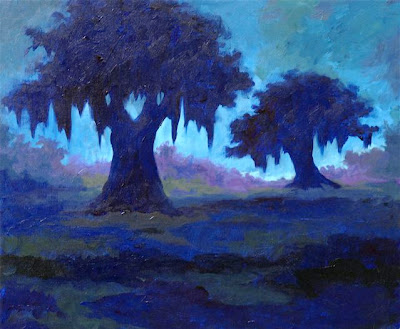 New Orleans is post-Katrina today and going forward. Life here is defined by ‘before the storm’ and ‘after.’ Who knows what life would be today had we not sustained this hurricane, and had we not flooded. Those who found the means physically, financially, and emotionally, coped in their own way and moved on if possible. It is through these ethereal and hopeful Blue Dog and Landscape paintings that George Rodrigue made his way home. 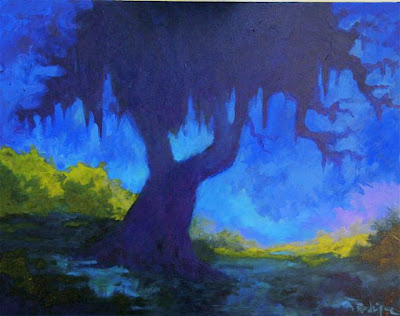 Wendy
pictured above: Blue Fall in Louisiana, 2007
For our personal story following Katrina, see the post "For New Orleans"