Beginning in 1980 George Rodrigue painted ten portraits, one each year, honoring guest lecturers at what was then called the University of Southwest Louisiana (now the University of Louisiana at Lafayette). The speaker series was conceived by Professor Maurice DuQuesnay and funded by Flora Levy, a Lafayette heiress and philanthropist who left her fortune to the university.

George lived in Lafayette at the time, and he supported the university, which provided his first intensive art classes, including his studies with Professor Calvin Harlan in 1963, where George created a design book over many months, a project that ultimately landed him at the prestigious graduate school, the Art Center College of Design in Los Angeles. (For more see the post Art School: 1962-1967). He saw the lecture portraits as a way of giving back to his alma mater.

In most cases the speakers posed for George for photographs which he used as a guide in painting their portrait. There is an interesting exception, however. Isaac Singer was unavailable, and George was unhappy with the provided pictures. Instead he watched a tape of Singer’s famous 1979 Dick Cavett interview and photographed him from there. 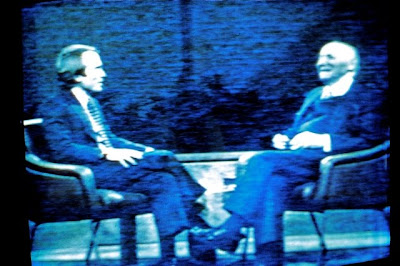 In addition, Dr. DuQuesnay provided George with a list of key elements from important works by each guest lecturer. This way George, never a fan of fiction or philosophy, had his choice of symbols without actually having to read the books. As a result, in researching this post we had a lot of conversations that went something like,

“George, what does the devil mean, coming out of the box? What about the butterfly and snake with Shirley Ann Grau?” To which he replied,

“I have no idea. Those things were on the list. Ask Maurice.”

Posters from the paintings advertised the public lectures, and small quantities signed by both Rodrigue and the painting’s subject sold each year to benefit the university. 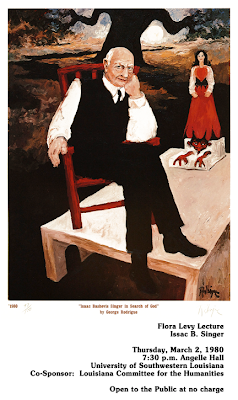 Isaac Bashevis Singer (1902-1991), the Nobel Prize winning author, spoke at the first lecture in 1980. George recalls Dr. DuQuesnay’s horror when Singer instructed his assistant to open her folder and choose a lecture, indicating his indifference. Yet the inaugural lecture was a success, and Singer’s big name helped attract others in the coming years.

At Dr. DuQuesnay’s request, George hosted Singer in his home for a reception, as well as meetings with local press. George photographed Singer throughout the events, including this picture taken in his Jefferson Street home and gallery, which he later used for the painting I Love My Rocker (1981, oil on canvas, 24x36). 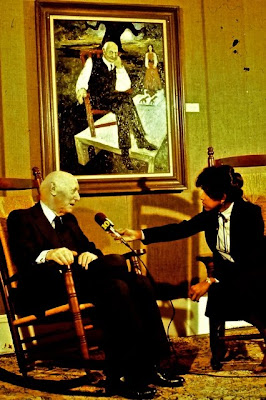 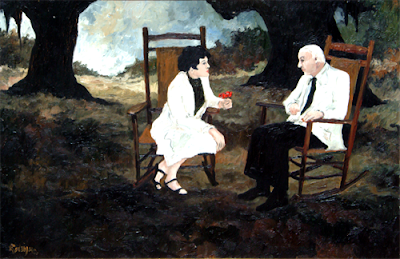 Robert Coles (b. 1929), a Professor of Psychiatry at Harvard University, focused his lecture on John Kennedy Toole’s Pulitzer Prize winning novel, A Confederacy of Dunces, a book ultimately published due to the efforts of another Flora Levy guest speaker, Walker Percy. In the painting, the houses represent the game of life played out by Toole’s characters on the checkerboard of New Orleans. The writer’s portrait hangs on the tree. 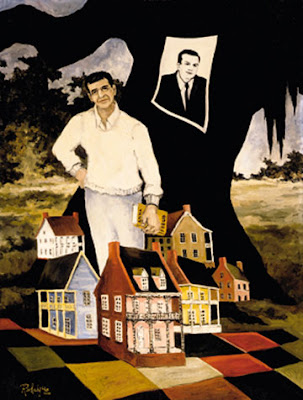 Once again, George hosted a reception for both Coles and another special guest, Thelma Toole, John Kennedy’s mother (pictured with George below), who made the trip from New Orleans. 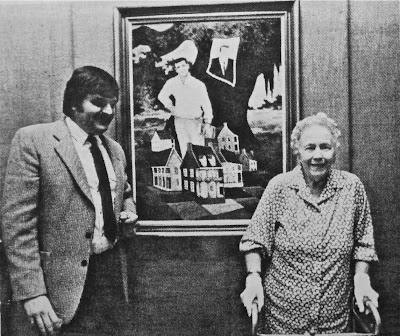 Shirley Ann Grau (b. 1929) won the Pulitzer Prize for her novel The Keepers of the House (one of the best books I’ve ever read, and prized among my first editions) in 1965. George photographed Grau in her home in Old Metairie, a suburb of New Orleans. Still on the hunt for those slides… 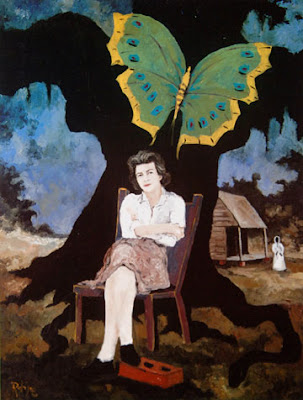 Bruno Bettelheim (1903-1990) was an American developmental psychologist born in Austria and imprisoned in the Dachau and Buchenwald concentration camps during the Nazi occupation. His lecture focused on Polish author, doctor and educator Janusz Korczak. 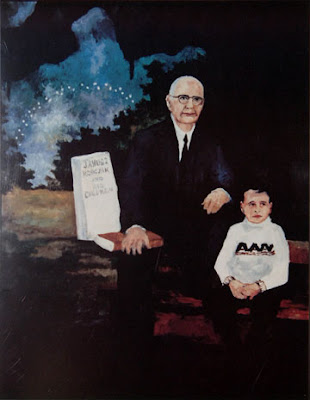 Cleanth Brooks (1906-1994), a professor from Yale University, lectured on Robert Penn Warren’s tale of infamous Louisiana Governor and U.S. Senator Huey Long, titled All the King’s Men. Notice the blood running from the Louisiana State Capitol, where Long was assassinated in 1935 (for more on Long, including Rodrigue’s portraits of both Huey and his brother, see the post Portraits: The Kingfish and Uncle Earl). 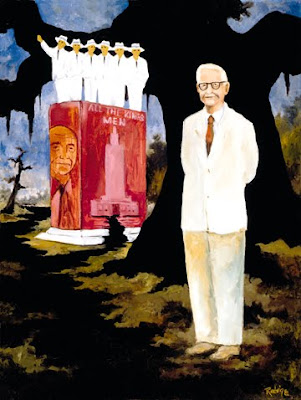 Ian Stevenson (1918-2007), a Professor of Psychiatry from the University of Virginia was known for his investigations of the paranormal, specifically the possibility of past lives. His lecture was entitled, “Some of My Journeys Into Medicine.” 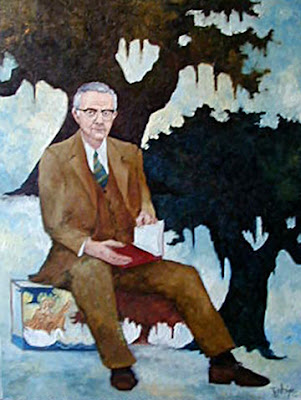 Peter Gay (b. 1923), a history professor from Yale University, received the National Book Award in 1967 for his political tome, The Enlightenment: An Interpretation. For his lecture he focused on Erik Erikson (the shadowy figure in the door), a noted developmental psychologist who coined the phrase ‘identity crisis.’ 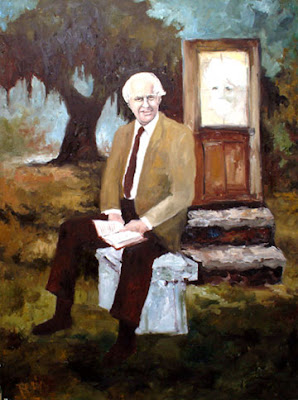 Sophie Freud (b. 1924) chaired the Human Behavior Sequence at the Simmons College School of Social Work. She spoke about her famous grandfather, Sigmund Freud, as well as her aunt, Anna Freud, who helped to establish the field of psychoanalytic child psychology. Sigmund and Anna take a walk together in the painting’s background. 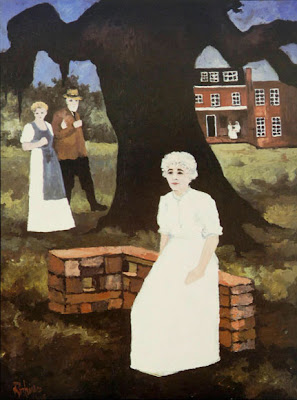 Walker Percy (1916-1990) won the National Book Award for his novel The Moviegoer in 1962. Marked by its philosophical emphasis on existentialism, his work has come to define excellence in southern literature. (photograph and painting by George Rodrigue) 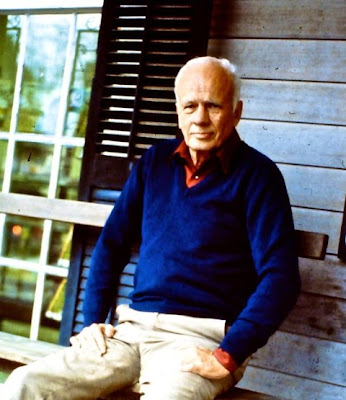 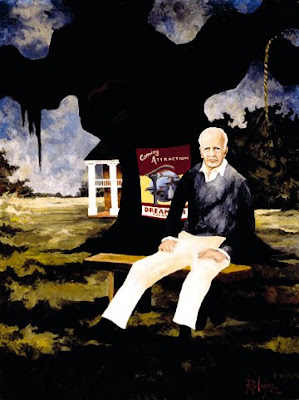 Father Avery Dulles (1918-2008) was a cardinal of the Roman Catholic Church and a Professor of Religion at Fordham University. In addition, his family connections were notable. His father was U.S. Secretary of State John Foster Dulles; his uncle was Director of Central Intelligence Allen Welsh; and both his great-grandfather and great-uncle served as U.S. Secretary of State. 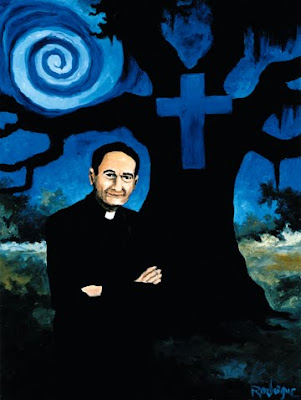 Flora Levy attended the first two years of lectures before her death. Pleased with George’s portraits, she commissioned him through her foundation to paint her as a young woman holding her dog. She died soon after, and George was left without her assistance. This was a real problem, because there were no early photographs among her things. To complete the painting, George had no choice but to imagine the elderly Levy as a young woman.*

Levy bequeathed her portrait to the University of Louisiana at Lafayette where, as far as we know, it hangs today.

The ten portraits from the Flora Levy Lecture Series are not with the university, as one might expect. Rather, they remain in George Rodrigue’s personal collection. However, we do loan them out for exhibition on occasion. The paintings represent an unusual group of individuals that have impacted our culture through their writings, lectures, and theories. Our personal favorites are the four portraits of southern writers, Walker Percy, Brooks for Robert Penn Warren, Coles for John Kennedy Toole, and Shirley Ann Grau, a grouping that hangs in our home when it’s not on loan.

Finally, I asked George what it was like to visit with these intellectuals. He replied with a laugh,

“The writers were okay. But the psychiatrists? They’re all crazy.”

*Unfortunately I was unable to find a photograph of Flora Levy’s portrait. I’ll add it if and when I do, or if I’m able to obtain one from UL.

**For a related post see "Remember Lafayette's Advocates for the Arts"