It’s ironic. In south Louisiana, where alligators actually do cross the road (or the levee or the yard or the bayou), there’s no warning. However, in Carmel Valley, California, where the possibility is, okay, impossible, you’re warned just in case.

I guess this makes sense if you consider the context. A Cajun lives in this house, and he won’t take any chances. 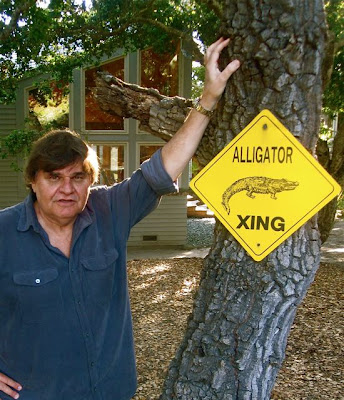 For years George Rodrigue has painted alligators, specifically the story of Tee Coon (the same Tee Coon who was the janitor at New Iberia’s Catholic High), who tried all of his life to catch the largest alligator in the bayou. Once he did, he found he’d lost his best friend. (I think there’s a similar fish story out there, but this is George’s version, so bear with me.) 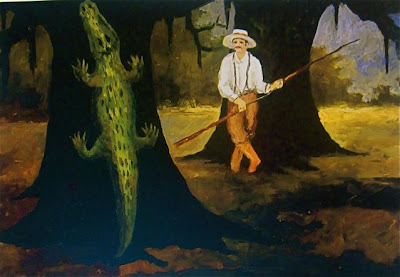 I could fill this post with alligator paintings, but this week I’m more interested in the ‘crossing’ part of this warning sign. The alligators (most of them, anyway) will have to wait. You see, we just crossed America in our truck, 2200 miles from New Orleans to Carmel, from the bayou to the Pacific Coast. (pictured, The Crossroads of My Life, acrylic on canvas, 2007) 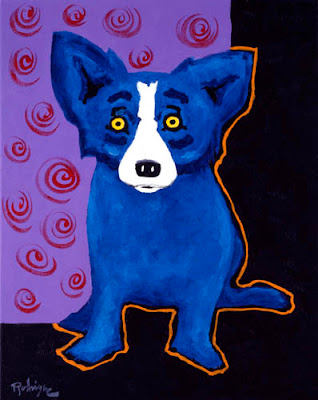 Alongside I-40 we watched what’s left of Route 66, the road George took from New Iberia to Los Angeles to reach art school in the 1960s. The narrow asphalt, once lined with diners and motels, hugs the terrain, a different experience from today’s wide, flat highways. 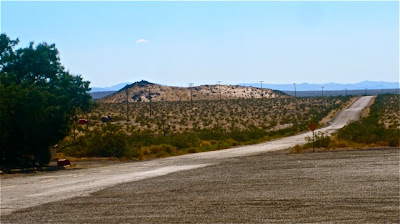 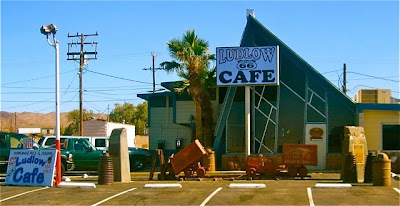 We told stories in our truck and, as we do every year, we got to know each other better. 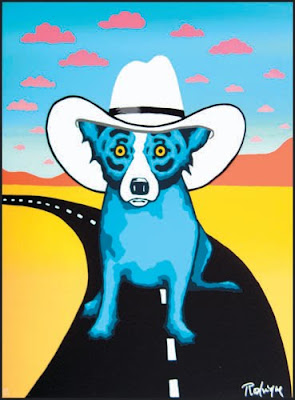 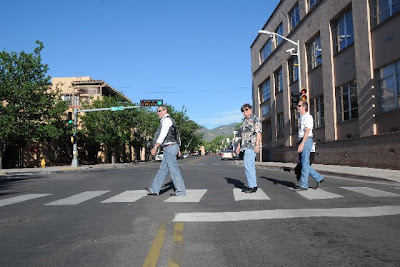 Scott Wayne Emmerich, an innovative boot maker from Los Angeles, also passing through Santa Fe in his truck (on his way to Cody, Wyoming to see a special girl) showed off his latest creation: one-of-a-kind alligator boots with eyes. (photographed by Dana Waldon) 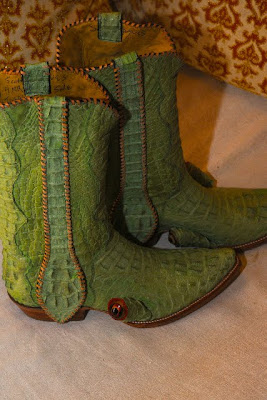 George was tempted but passed on the boots, despite my pleading,

“But it’s so romantic! You’ll be like Michael Douglas in Romancing the Stone!”

(Remember that last scene, when he puts his boot up on the edge of the boat, and Kathleen Turner, ditching her groceries on the New York street but holding her flowers, climbs the rope ladder and says in that throaty, fabulous voice, 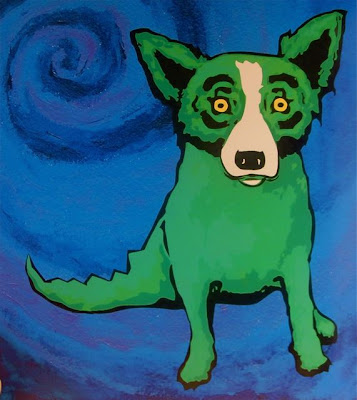 Ahem. And while we’re on ‘crossing,’ let’s not forget the proverbial chicken. Fortunately I’ve covered that well in another post: Rabbits and Chickens In (and Out) of Rodrigue Paintings. Whew. So here’s another alligator. 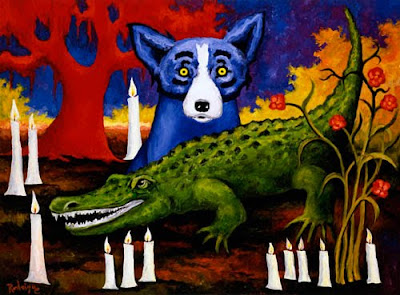 (pictured above, A Novena for the Oaks, 1993, acrylic on canvas)

We crossed from Louisiana to Texas to New Mexico to Arizona (with a northern detour into Utah) and finally into California, where we were met with wavy, grassy, dry but somehow beautiful hills, as though the golden, rolling landscape was a signpost for the miners: 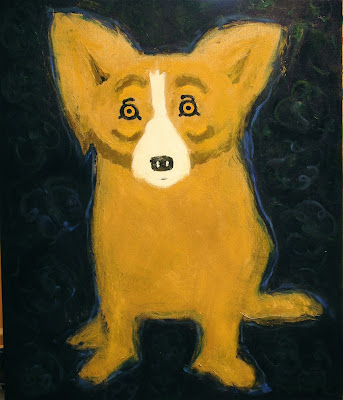 And then there’s the big crossing: crossing over. I committed to reading the Bible this summer, sections from the Old and New Testaments, Psalms, and Proverbs each day. (My husband and my sister are shaking, terrified: What will she say? How many will she offend?). 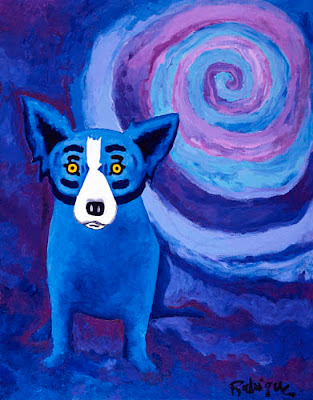 (pictured above: Crossing Over, acrylic on canvas, 2007)

I’m a month into it, so the Israelites are fleeing Egypt, crossing the Red Sea with the help of Moses and his staff (a long wooden stick, not his employees); Jesus is busy challenging the Roman religious leaders, so I’m assuming the Last Supper is around the corner.

The stories haven’t gotten me back to church, and so this dedication probably won’t get me into Heaven, but it has inspired some great discussions with George, a Catholic schoolboy (who left the church long before me but lives for diatribe on the history and doctrine of Christianity), especially as we crossed the dry desert country and talked about the need for forty days of rain. 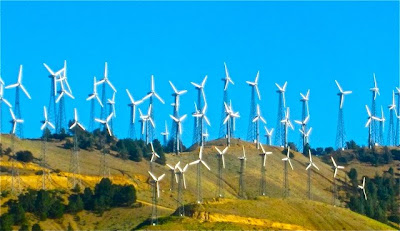 Near Bakersfield, as we passed miles of farmland, George told me about the Great Dust Bowl of the 1930s, a travel-vignette probably spurred on as much by that day’s reading, the swarming locusts in Egypt (courtesy of Moses and that staff again…), as by the almonds and grapevines of southeastern California. That’s right, we read the Bible as we crossed into California, drained of days of conversation on the road and looking to God (or Leif Enger, as the case may be):

“Whenever I didn’t know what to write next, I put a swift river in front of his horse and sent the two of them across!” (Leif Enger, So Brave, Young, and Handsome, 2008, Atlantic Monthly Press) 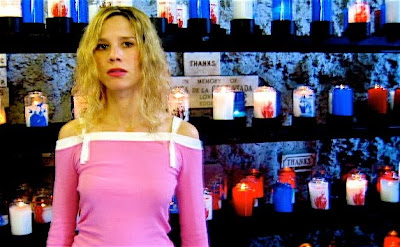 (pictured above, Wendy in a Grotto)

So now we’re in Carmel. George is back at his easel (or posing for pictures); I’ve completed four blog posts on and about the road; and I’m well into the Bible. A bit of normalcy ---- you know, blogs with the history of the artist and his paintings ---- is around the corner. 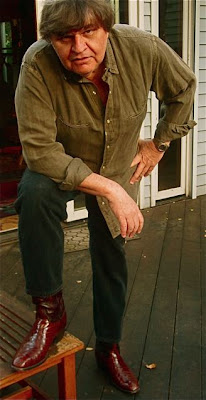 Unless otherwise noted, such as the ones by Dana Waldon and the one of George ala Michael Douglas above (by me), all photographs by George Rodrigue