“All men were made by the Great Spirit Chief. They are all brothers.” Chief Joseph

It was in a college class called ‘Religion and Social Issues’ that I first read Bury My Heart at Wounded Knee (1970, Dee Brown), a book that sunk my sheltered self into a depression I had not known since reading half of The Rise and Fall of the Third Reich (1960, William L. Shirer), a book my mother absconded from me at age fifteen, because she noticed that I’d lost my smile. 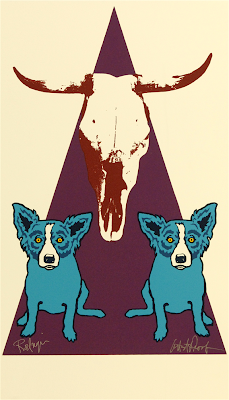 I revisited Bury My Heart ten years ago when George Rodrigue and I visited my uncle in Wyoming. We viewed a related exhibit at the Buffalo Bill Historical Center in Cody, and the book, along with the American crisis, came rushing back. George had never seen me in such a state, unable to grip my emotions for the guilt I felt from what my white-skinned ancestors perpetrated on the Native Americans.

Today I thought about it again as we crossed New Mexico and northeastern Arizona, including the Navajo Nation and the Hopi Indian Reservation. On Willie’s Place, Dolly Parton sang “Color Me America: Red, White and Blue,” as George and I drank in the colors of this magnificent land, iced with the same clouds Georgia O’Keeffe painted from Abiquiu (pictured below), as she looked up from the New Mexico desert (or more likely down from an airplane). 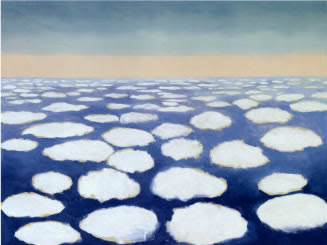 I imagined the Hopi Chief standing on the edge of a mesa, summoned by a representative sent by the President of the United States:

“As far as you can see, this land is your land.”

And indeed, the Hopi land is as far as the eye can see, finally fading into a hazy horizon. It could not be more endless if the pact was made on the coast of California as they stared across the Pacific.

And yet, I cry for our Native Americans, the ones from my home area of northwest Florida ‘relocated’ by an American hero, Andrew Jackson. They live in an incredibly beautiful, bountiful country, in trailers on either side of bumpy, broken roads, their only consolation the casinos, which may or may not help their plight. It’s as though we threw them to the desert and forgot about them, gave them land and said, ‘Now you’re on your own,’ a near impossibility in this government-dependent, money-borrowing land of ours (and I mean all of ours).

(pictured, George Rodrigue on the Hopi Indian Reservation, with crashed cars in the ravine)

George and I stopped at the Hubbell Trading Post, a national landmark within the Navajo Nation. A sign encouraged us to barter, but I couldn’t bring myself to haggle with the striking merchant, his black hair shining and reaching below his waist, over the price of the homemade bread-n-butter pickles, fig preserves, and habanero salsa.

(pictured, homes on the Hopi Reservation)

On our drive I thought about the Indians buried in mass graves behind the Mission at San Juan Bautista (built 1797), the church they died building, a popular tourist destination for its architecture, gardens and California history, a place George and I crash weddings and cart our houseguests. 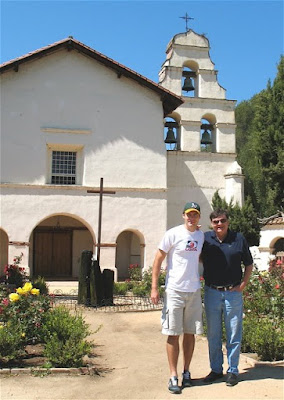 These are the beautiful people, the original American culture. How must it be for them to look at me, descended from a family that stole their land, standing in their western sun, blonde, fair-skinned, holding a camera, and wearing their jewelry?

Although the buildings on the reservation look abandoned, all are occupied:

“I wonder how many of these people ever leave this place,” I mused out loud.

“None of them,” said George. 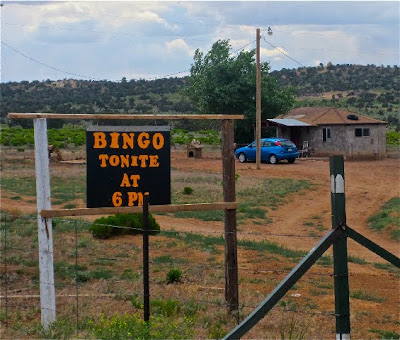 For me, the American West is marked by this mixture of the tragic and the stunning, of land that tells a story, with people in the smallest roles, consumed by the dust, the warm air, the expanse of America, the soul of a true American people.

But crossing America, it’s not only the Indians on my mind. On every drive, the closer we get to California, the more I melt into another book, a story of American dreams and destiny, The Grapes of Wrath (John Steinbeck, 1939). I imagine first the pioneers, then the gold-miners, and finally those just seeking a better life picking peaches or tilling a field for garlic or strawberries. 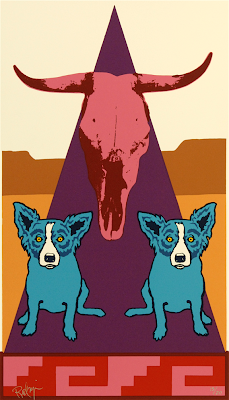 I imagine these folks in their wagons heading over the same ridges we cross in our 70-mph, air-conditioned truck, facing a week to cross a valley and maybe more to round a mountain. I imagine them not seeking a vacation home, wine tastings and backyard barbeques, but rather shelter, a bath, and their next meal.

And this wasn’t so long ago! The trading post we visited today within the Navajo Nation was started with a couple of out buildings by a man of Anglo and Spanish descent, John Lorenzo Hubbell, in 1878. His descendents lived on the property and operated the business until 1967 when they turned it over to the National Historic Registry, which operates it today as a significant site in United States history. 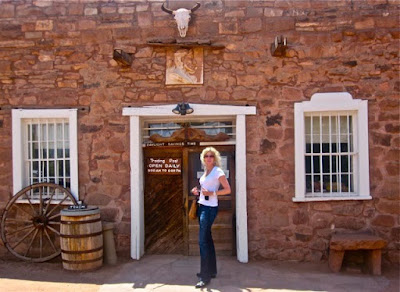 For the better part of our drive, George and I were silent and sentimental, our voices muzzled by ‘the big picture.’ To myself, I try to pinpoint my mood, the reason for my sadness. Why aren’t I happy for these people, the original Americans? I mean, shouldn’t they be pleased living on this land that we gave them? And so at last I uncover the word for this churning in my chest:

And yet, the shame does not, cannot overshadow my pride in my country. Nestled in the red rocks above the trailers, we see adobe churches shining like the medieval castles of Hessen. And we see land, more land than a city-dweller comprehends on earth, this thing we must protect, this thing that defines us just as much as our people and history.

And I remember that as the generations pass, we mature as a people. We’re more conscious of the environment, of influences on our children, of a global society. Everything changes, maybe for the better and maybe not --- but it does change. Here’s a small example:

For several years George and I filled our truck on our cross-country drive with clay pots, many formed in the shape of turtles or frogs, discovered along the way at road stands and junk shops. Finally abandoning this passion, to my horror George confessed his interest in taxidermy, and we traveled with assorted dead animals carefully arranged among our luggage. 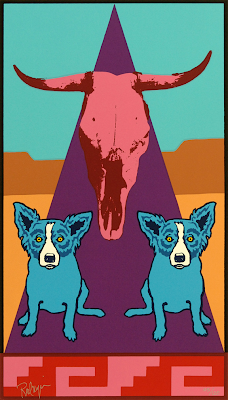 I specifically recall the year of the Jackson Hole moose, disguised like trash in the back of our bright red pick-up with hopes of averting thieves, but nevertheless requiring that we take turns throughout the night standing watch at the window of our room at Motel 6 (it wouldn't fit through the door). The same moose, now painted blue, was the only thing rescued from the burning Café Tee George in 1998, and it hangs today over the entrance to the Blue Dog Café in Lafayette, Louisiana.

I was too young and newly married to effectively protest this purchase, something George knows he’d never get away with today, aside from the occasional and, according to George, irresistible stuffed raccoon (oh how I wish I were kidding). 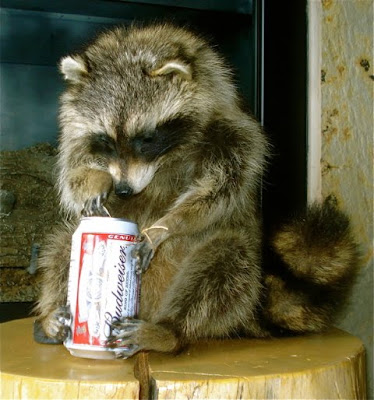 But times and sentiments change, even for a 66-year old otherwise stuck-in-his-ways Cajun. This trip, with the help of a good friend, we found two racks, both from animals that died in the wild, an elk for George and some sort of beautiful, yet unidentified smaller African skull for me --- my first, but I found it to be so delicate and earthy that I’m convinced it will inspire me in my office (that room of my own), joining my mother’s painting of Stonehenge and a Native American flute, a treasured gift from my dad. 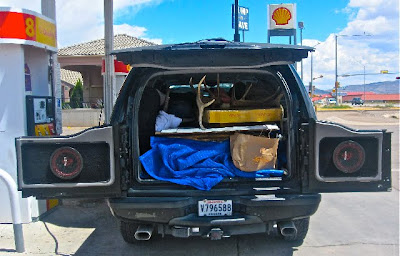 The point is that the animals did not die for these mounts (a fact that finally pleases George as much as it does me), and it is the delicate sculpture of their bones that reminds us of not only the circle of life, but also the inter-relatedness of all beings, that philosophy that makes us not just Americans but members of the world's community.

And indeed, we have reason to celebrate the 4th of July, not just because of a famous document and its resulting independence for all people in this country, but even more so because it is a sign of our advanced thinking, of a growing compassion and intelligence that continues to supersede tragedies such as the displaced American Indians, the slavery of African Americans, and other horrific indiscretions.

We are growing in a way that started with our independence, and we must celebrate this forward thinking, this diversity, and this land, not just on the 4th of July, but every day. 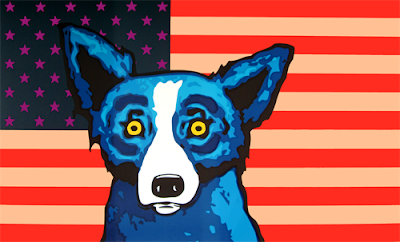 "Listen! Ha! In the Frigid Land you repose, O Blue Dog. O now you have swiftly drawn to hearken. O great [spirit], you never fail in anything. O appear and draw near running, for your prey never escapes. You have settled a very small part of it far off there at the end of the earth."*

For Part 1 of this cross-country trek, see the post Crossing West Texas (and the Moo-Cow Blues) and for the conclusion, visit Alligator Crossing

Pictured throughout this post: various screen proofs of Pueblo Puppies, an original silkscreen by George Rodrigue, 1993

Unless otherwise noted, all photos in this post by George Rodrigue, July 2, 2010

I realize I promised you a post full of patriotic paintings and prints, however I felt compelled to write about the road, and, well, any day is a good day to celebrate America. So later, I promise- 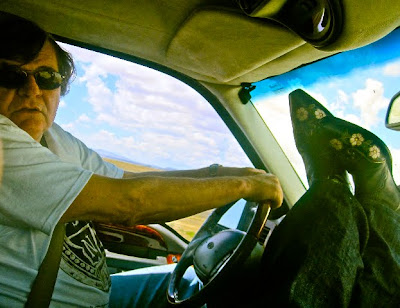 Posted by Wendy Rodrigue Magnus at 1:52 AM