In many ways George Rodrigue is a big kid. Although he’s serious in both the application and concept of his art, he’s never denied that painting is fun. In fact, he’s famous for saying, 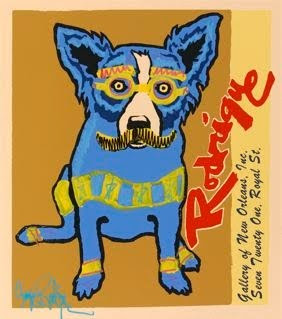 He strives more for himself than for his audience to keep his work exciting and fresh, and it’s for this reason that his favorite way to paint is without preconceived ideas. He avoids planning and sketching unless absolutely necessary (as in the case of portraiture or complex works such as the designs for The Abstract Paintings or Bodies). 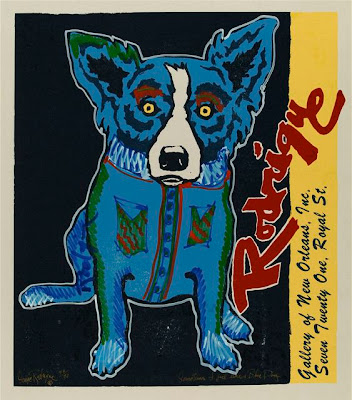 Almost from the beginning of the Blue Dog Series, George found a release from controlled designs in mixed medias. From his first silkscreens (Gallery Edition I and II from 1990, size 28x25, pictured embellished above), he chose certain printed designs as the basis for a free-style doodling of sorts, altering the image with original paint applied by his own hand. Occasionally he printed the silkscreen design on plywood before adding acrylic paint. (pictured, Red Moon on plywood with acrylic paint, from 1991, size 28x23) 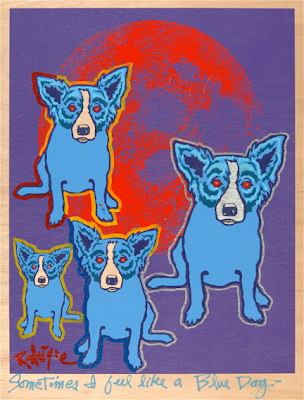 Eventually George chose a specific silkscreen design, rather than random artist proofs, for these mixed medias. For many years he embellished silkscreens of a simple dog on a white background, ranging in size from 35x25 inches to a larger scale of 49x37. These oversized pieces are among his favorites, and he paints them in an unusual way. 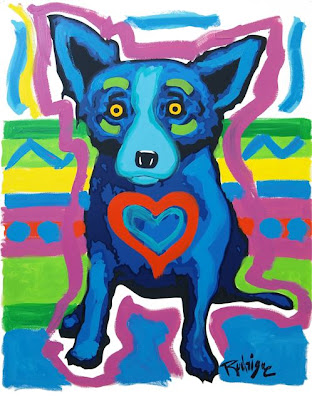 The mild and dry climate in Carmel, California allows George to paint outside. Although he built a studio at our home in Carmel Valley in 2001, when painting mixed medias he prefers the garage, removing the cars and nailing the large-scale paper directly to the wall. 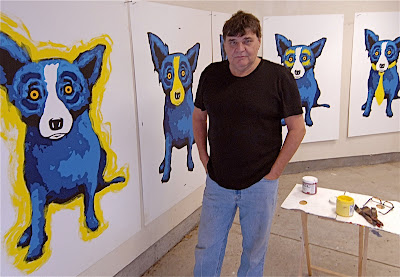 In his studio, George normally completes a painting on canvas from start to finish without beginning another. However in the garage with the mixed medias, he paints a dozen images at once --- playing, doodling, splashing his paint, enjoying his music and the fresh air, and relishing in the spontaneity that so often is unavailable to him in the studio. 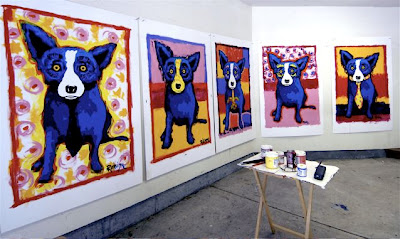 Recently he expanded this to include works on chrome. While he may spend less than an hour applying the original paint to one piece, the initial set-up for these impressive works took George nearly a year. He had difficulty finding not only a printable chrome paper, but also one heavy enough to sustain possible dings, scratches, and other damages that might result from shipping, framing, and from his own handling of the work as he paints.
In the end, he discovered a heavy chrome board, still prone to fingerprints and scratches, but less likely to ding. After he paints, he covers each piece in plexiglas for protection. 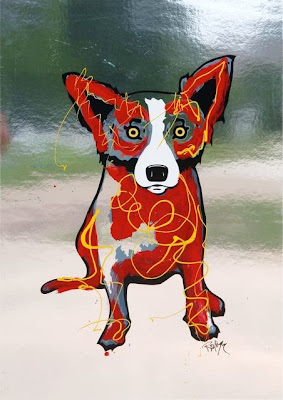 In addition, he had trouble finding a paint that would adhere to the material. Most paints washed away, beaded, or simply declined to adhere. Finally he worked with not only thick acrylic paint, but also silkscreen ink. This gave him the added bonus of dripping and splashing the color ala Jackson Pollock, resulting in an even greater freedom and sense of play.** 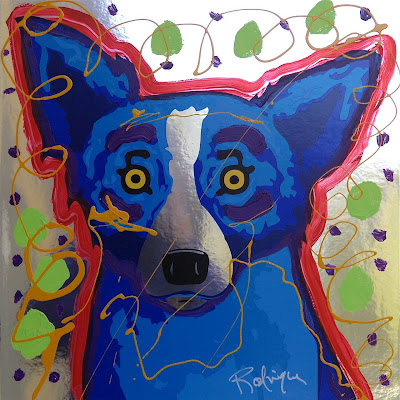 Once he grasped the materials, George went to town, painting numerous mixed media works on chrome over the past three years. These include small heads (size 18x18) and full bodies (size 37x26) such as those pictured above. His favorites, however, are the large-scale works, size 80x56, created by combining four boards. 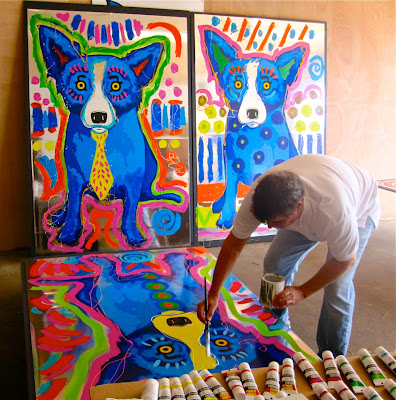 These huge pieces appeal to public institutions in particular, especially children’s hospitals, where the patients and visitors see their reflections alongside the Blue Dog. Because of the plexiglas, there is little danger of damage, and people are encouraged to touch the works and take photographs. In these venues, George hopes the young patients take away something positive from an otherwise traumatic experience, even if it’s just a memory of bright colors and a piece of art that reflects not only their own image, but also the joy with which it was created.

"…Life, viewed through the tint and hue of imagination, becomes something one can better tolerate and understand.”* 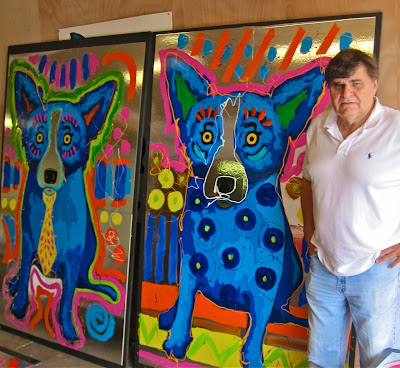 The chrome material appeals to George not only because of its reflective quality, but also because of its 1950s decorative connotations, its natural reference to automobiles, and its similarity to the Blue Dog sculptures. Because of the chrome, his mixed medias take on a new, contemporary look, and what may have bordered on redundant (even for him) becomes fun again, made all the more so by the public’s attention to these works. As George says,

Wendy
For a related post see "Mixed Medias:  A Special Series on Board"
For another type of free-form work, see the post "Hurricanes."
*R.J. Ellory, A Quiet Belief in Angels, 2009, The Overlook Press
**I’m reminded of Picasso’s famous quote: “It took me a whole lifetime to learn how to draw like a child again.” For more on Picasso and Rodrigue, see the post “I First Loved Picasso (Again)”