Boudreaux in a Barrel

As any Louisiana joke teller knows, the two lead characters of most Cajun stories are Boudreaux and Marie. They might venture out fishing with a roll of duct tape or accidentally hit a skunk with their truck. Maybe Marie catches old man Boudreaux’s attention with her pot of gumbo, or perhaps Boudreaux waits until their wedding night to explain his knobby knees (knee-sles), gnarly toes (toe-lio), and other oddities.

The name Boudreaux, in other words, was a natural choice for Cajun artist George Rodrigue in reference to his classic painting, Boudreaux in a Barrel (1972), despite the fact that the original photograph (New Iberia, Louisiana, circa 1920) includes no such character.

(Ironically, it does include a ‘Marie,’ however; George’s mother, Marie Courregé Rodrigue, stands on the right; his father, George Sr., stands in the middle). 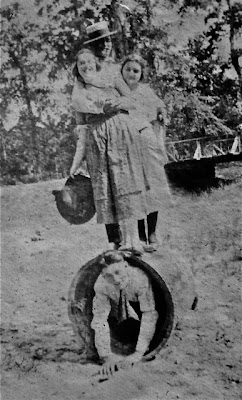 George first painted from photographs in the early 1970s, when he discovered his mother’s photo album. About this same period he wondered,

“What would a person look like who walked out from behind one of my oak trees?”

He transferred the images to slides and projected the shapes onto his canvas. In this way, he created a specific style all his own. In the case of Boudreaux in a Barrel, for example, he used graphite to trace the outline of the shape created by the four characters and barrel onto a 36x28 inch canvas. From there, he framed them with the lines of an oak tree, so that they are locked in and steady. 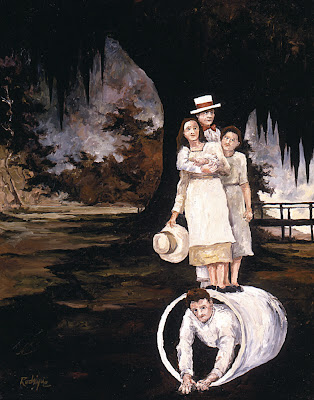 Unlike the photograph, the painting’s figures have no chance of falling. It’s as though George took the shape created by the original characters, cut it out with scissors, and pasted it onto a landscape, so that the hard edges of the tree hold the people together. There is nothing haphazard about the design. It is specific, so that moving even one element, one edge, one shape, destroys the composition.

The Cajuns, George says, are inseparable from their landscape. They are a transplanted people, first from France and then from Canada, and finally pasted onto south Louisiana, where they made a home for themselves in the swamps and prairies following the Grand Dérangement of 1755. (See the posts The Saga of the Acadians and Evangeline).

George committed early on to ‘graphically interpret the Cajun culture’ on his canvas. The paintings of the 1970s in particular are full of symbolism. Nothing is random. Even the tree, cut off at the top, creates a small sky and a light in the distance, referencing the hope of the Acadians to make a home for themselves in a new land. (For more, see the post Early Oak Trees).

In addition, the figures, all in white and lit up as though under a spotlight instead of a tree, break the rules of art. In George's painting, the Cajuns shine from the inside out, creating both timeless characters (is this 1800 or 1900?), as well as ones that glow with their culture.

So despite the fun in George’s title and the horseplay of its models, the dichotomy is clear. The painting is serious --- in its subject, its symbolism, its strong design, and especially in the deliberate, focused way in which it’s painted. As a result, Boudreaux in a Barrel is not only a classic Rodrigue, but also a defining piece of both Cajun and American art.

For details on another classic Cajun painting, see the post The Aioli Dinner.

For Marie's New Iberia school class of 1924, see the post The Class.