If you follow this blog, you have a good understanding of the Blue Dog’s history (and if you don’t, check out the links under ‘Popular Musings’ to the right of this post). From the loup-garou to Tiffany to Blue Dog Man and the Abstract, the image has developed in style and meaning along with George Rodrigue and his interests. If something affects him in life, it probably shows up on his canvas, sometimes, as with the Dark Period following Hurricane Katrina, in more obvious ways than others.
Throughout, however, the Blue Dog retains an underlying quality more consistent than its Cajun roots, its repetitive and hard-edge “Pop” style, and its predictable stance. The Blue Dog, after twenty-five years of development remains, always, American. 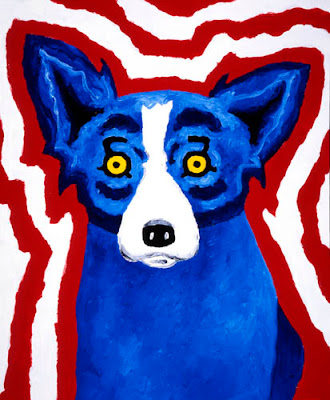 This was possibly subconscious on George’s part. His Cajun paintings already focused on patriotism, as detailed in last week’s post. The American flag appears in a large portion of those works, a trend that continues into the Blue Dog Series, such as Tee George on the Bull from 1996, a life-size (six foot) canvas adapted from George’s childhood photo of 1949.

(This painting always reminds me of an early review of George’s paintings from the French newspaper Le Figaro, in which they describe him as the “Louisiana Rousseau,” an ironic recollection given the nature of this post). 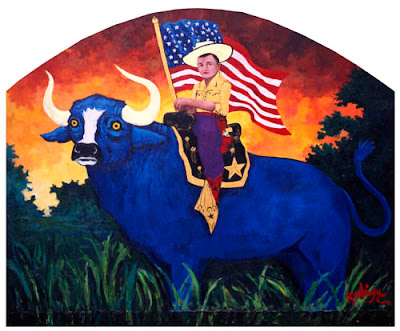 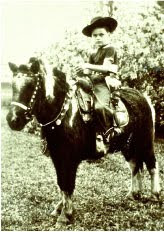 The early Blue Dog paintings from 1984 and into the early 1990s were not the strong bold blue of today’s image. Rather, as detailed in the post “Blue Dog In the Beginning,” the dog is a pale grey-blue, as affected by the night sky.

As George tightened the image and strengthened the design, however, he also saturated the dog with color, as though the blue could not be intense enough. The same can be said of the typical American blues and reds on the Fourth of July, so much stronger today than those on our early American flags. George’s use of our patriotic red, white, and blue is a natural meld with the Blue Dog. 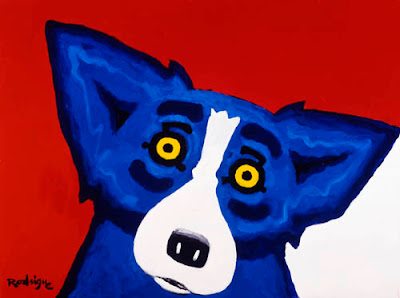 There are dozens, maybe more than one hundred, Blue Dog American themed works highlighting these symbolic colors, including the hand-painted banner hanging on the wall behind me as I type this post, a piece that originally hung for three weeks (along with four other American Blue Dogs of this size) on the outside of Union Station in Washington D.C. 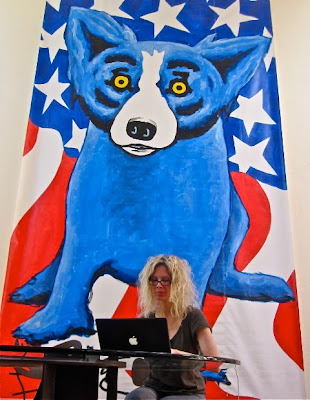 In addition to the Blue Dog, George has painted Red Dogs from the beginning, as well as the occasional White Dog referencing Tiffany, three concepts easily combining into a patriotic palette. (pictured, Brotherhood, 2005, 30x40) 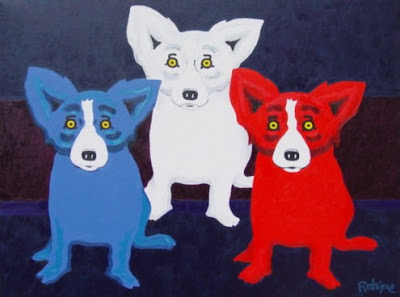 But it’s not just the colors that inspire George. It’s the American spirit, as alive in him as it is in most Americans. It’s that love of our country that sends us on our cross-country drives each year, exploring the land, studying the history, and meeting the people.

(As Honest as the Day is Long, inspired by a visit to Mount Rushmore a few years ago) 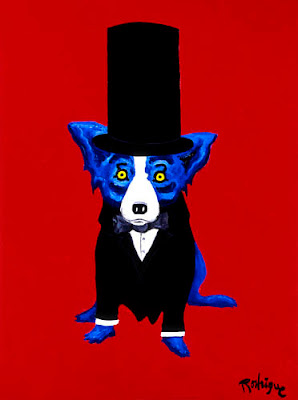 In addition, the American musical, specifically the Yankee Doodle-type, sing-your-heart-out, tap-dancing enthusiasm of post World War II Hollywood, stirs George’s patriotism, as in his portrait of Gene Kelly below (1993, 40x30). 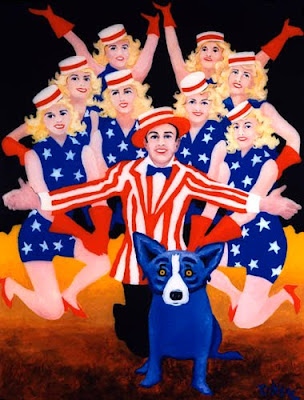 Perhaps George’s most significant American-Blue Dog images are those following September 11th, 2001. I share with you the painting Wave Our Flag, 40x40, below; however, his most profound work is, unquestionably, God Bless America, a painting I’ll describe in detail next month, including the story of its print and a shared and panicked desire to help one’s fellow Americans. 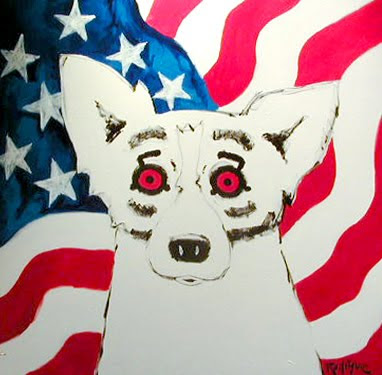 Similarly, We Will Rise Again following Hurricane Katrina taps these emotions and is better spotlighted in its own post. Other than works for Blue Dog Relief, it was many months before George returned to his easel after ‘the storm,’ and when he did, as described here, the paintings are fragmented and rooted in confusion, no different than George himself and certainly every person affected by those times. 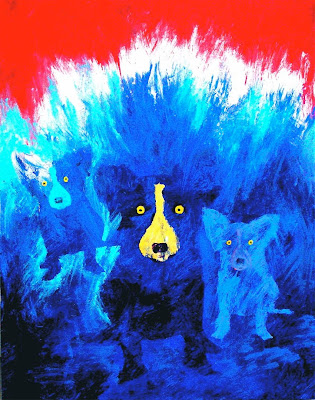 He held onto his patriotism, however, while struggling with his depression and disappointment, with hopes that tomorrow’s America would beam brighter, ever deserving of its red, white, and blue.

Finally, I'm reminded of an incident. While I was working at a Rodrigue exhibition in Munich maybe fifteen years ago, an American family passed by the window and peeked in. The man shook his head and grumbled,

The images in this post are of original, one-of-a-kind paintings. However, Rodrigue created many silkscreen editions over the years celebrating America. For images visit here, and for the complete collection, see the book George Rodrigue: Prints (2008, Harry N. Abrams, New York).

For more original paintings inspired by America, read about the Washington Blue Dog and Blue Dog for President