For many years the Cajun's identity was an ambivalent one. As recently as the 1970s, the label ‘Cajun’ was considered by many to be an insult. George Rodrigue’s own mother, in fact, was quick to point out her distaste for this aspect of George’s work, a twenty-five year dedication on his part:

“You’re French! Why would you call yourself Cajun?”

It was George’s years at art school in Los Angeles that triggered his pride in his heritage. It’s true that his mother’s father came to Louisiana directly from France; however, the Rodrigues came from Canada during the Grand Dérangement of 1755. His roots are Cajun, and his upbringing and surroundings contrast strongly with not only the West Coast, but also every state in between. 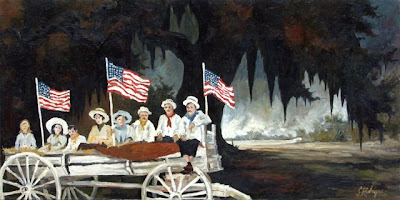 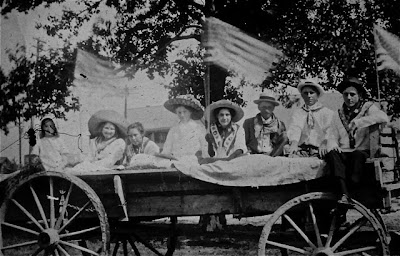 George realized early on that he grew up in a place like no other, and he feared its loss in the face of the modern world. It was his love of this unique and dying slice of not only Louisiana’s culture, but also America’s culture, that convinced him to paint his land and people.

(pictured, The Mamou Riding Academy, 1973, detailed in its own post at this link-) 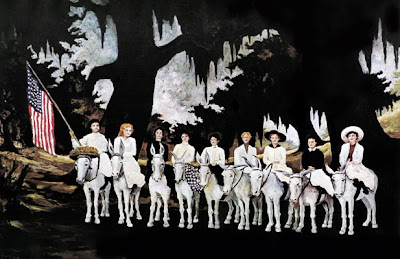 Following several years of landscape paintings, George included people on his canvas. Immediately he thought of them as primitive; however not as the ignorant, low-class population as judged by his mother and her generation, but rather as transplanted people who overcame enormous struggles to find a new home.

They are a people defined not only by their history, but also by the land that supports them, by the Louisiana oak trees and the bayous. He painted them filled with symbolism, floating like ghosts, timeless, and glowing with their culture.

(pictured, The Class of Marie Courrege; for the complete story of this painting, visit here) 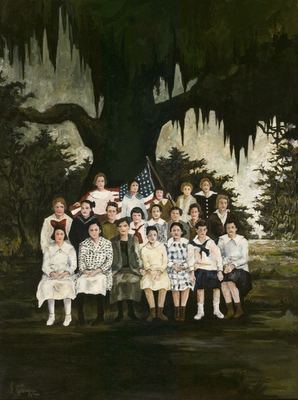 This cultural pride did not stop with the story of Evangeline. Rather, it embraced a larger definition, one that included the Acadian’s new country, America. This was especially true as the Cajuns became more established during the mid nineteenth century and into the early twentieth. If George’s Cajun paintings express a particular slice of time, this is the period. (pictured, 1986, 27x40) 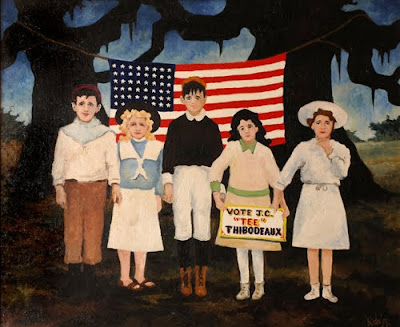 When he speaks of his Cajun paintings, George almost always focuses on their American roots --- roots of the art, the artist and the subjects:

“Even though the Cajuns spoke French, once they reached America they became, over the next one hundred years, truly Americanized. They were in a country with freedom of religion and freedom of speech, neither of which they experienced as the British moved into Nova Scotia. In America they became liberated, and they started to appreciate the concept that they were Americans. The 4th of July became a big event in their lives because it was an expression of the flag and nationalism.”

(pictured, Miss 4th of July of Carencro, 1973; the photograph from George's mother's album that inspired the painting; click photos to enlarge-) 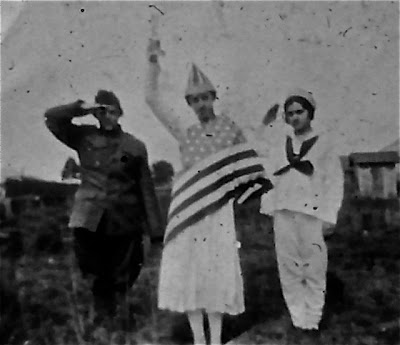 It was the draft during World War I that further Americanized the Cajuns.  George remembers his mother’s brother, Uncle Albert, fighting for his country. He was in the Navy in Europe, and he returned with “tremendous American pride.” 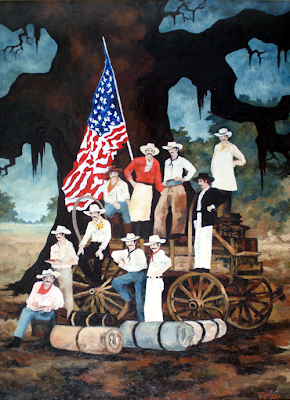 Nothing is quite so American as the cowboy. In 1987 George painted the historical piece, Louisiana Cowboys (above), measuring nearly ten feet high. He talks about the painting:

“West of Lafayette, near Crowley and Jennings, the land is flat. This was the beginning of the prairies that slowly moved geographically towards Texas. It was the perfect land for raising cattle, and in the late nineteenth century the Cajun cowboys drove their herds north through Shreveport and into Arkansas and Oklahoma to the railroad, to be sold and shipped up east.”

According to George these drives, although they only lasted a few years, became quite famous, as the cowboys directed their herds up the middle of the country. Eventually the railroad reached the cows, eliminating the need for cattle drives.

Similarly, the large canvas Indians, Cajuns and Cowboys (1988, 48x86, above) pays tribute to three specific and yet distinct aspects of American culture. George anchors his composition with the oak tree, its limbs spreading like an eagle’s wings to include the American West.

Even today, it is these three aspects of American culture that fascinate him the most, as evidenced by our yearly cross-country drives and his obsession with the West. (For more, see the posts Crossing West Texas and America the Beautiful) 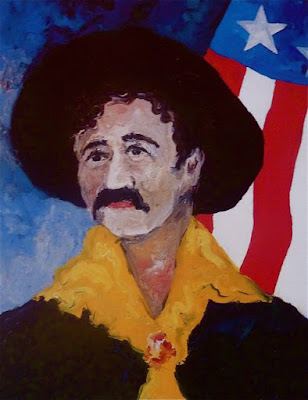 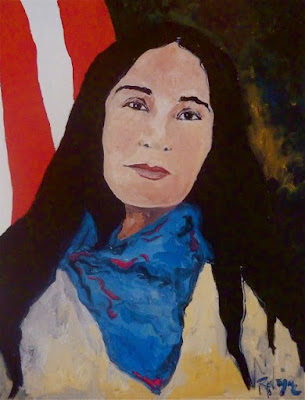 George also uses his portraits of politicians to reinforce this Cajun American pride, such as this campaign painting of former Governor Edwin Edwards, a Cajun from Crowley, Louisiana. 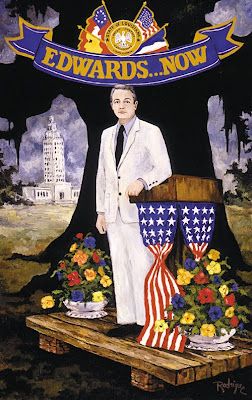 However, he approaches this in the opposite way as well, painting non-Cajun Americans in the same style as his Cajun subjects, such as his portrait of President George H.W. Bush, seated beneath an Evangeline oak tree with his grandchildren. (For the story of this painting, visit here) 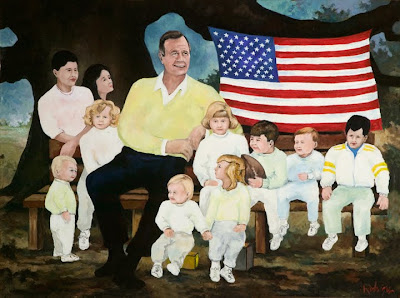 …And his recent large-scale painting for the National World War II Museum of President Eisenhower and boat-maker Andrew Higgins. 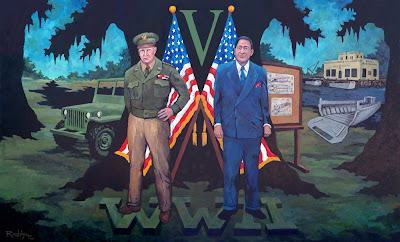 In all cases, George’s over-riding theme is patriotism, specifically a focus on the pride of individual Americans, as well as the American pride of a distinct culture, the Cajuns. Through his art, from the beginning, although he describes himself as a Cajun artist, he is first an American artist, fascinated by this country’s wondrous land, its variety of peoples, and its continuous and expanding potential.

-for a related post see “The American Blue Dog”