As I’ve mentioned before, it was many months before George Rodrigue returned to his easel following Hurricane Katrina, and when he did, the paintings were dark and fragmented, far different from the bright colors and strong designs normally associated with the Blue Dog Series.

Not only was he without a studio space to work, but also he felt little motivation to paint in his normal fashion. George has always said that his favorite painting is the one he’s working on now, and that in order for him to be happy, the work must be exciting for him. There was no happiness to be found in the months following Katrina.

That does not mean that he stopped creating. To the contrary, he devoted his efforts to a series of original silkscreen prints designed to raise money for Gulf Coast humanitarian, education, and arts needs following Katrina, and on-going for the next two years.

The first of these pieces and certainly one of the most successful was We Will Rise Again, a print that raised significant funds for the southeast Louisiana chapter of the American Red Cross. (pictured below, and already detailed in its own post) 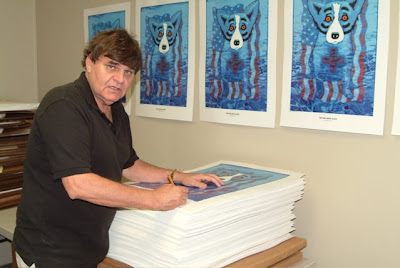 After the initial shock of Katrina, like many people George became angry, a rarity for this good-natured Cajun, and he responded with a somewhat unusual (for him) series of artistic political statements, the likes of which we hadn’t seen in him since the painting No More Dukes, in response to former Ku Klux Klan Grand Wizard David Duke’s campaign for the U.S. Senate. (for more on this, plus an image of the painting, see the post “The Painting in the Closet”)

He called the prints following Hurricane Katrina “Blue Dog Relief,” and used the money from their sales to help support not only humanitarian organizations such as the Red Cross and United Way, but also Louisiana’s struggling arts programs, many of which were unable to operate and generate funds for months.

This included the Louisiana Philharmonic Orchestra, the New Orleans Museum of Art, the New Orleans Book Fair, the Louisiana Endowment for the Humanities, the Artists on the Fence (surrounding Saint Louis Cathedral), and many more. In one instance, Blue Dog Relief funded a Washington D.C. trip for an entire school class from the Lower Ninth Ward, so that they had the opportunity to see our government first-hand and share the needs directly of their neighborhoods and schools.

In response to our government’s failure to protect our city, George created To Stay Alive We Need Levee 5, a succinct phrase describing the importance of levee protection able to withstand a category five storm. 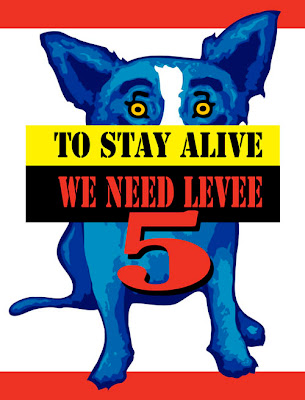 Not only did he sell this fine art silkscreen to benefit local programs, but also he delivered one print, along with related buttons, bumper stickers, and even t-shirts (something he’s otherwise avoided), to each member of Congress, with hopes that seeing the message in these formats and hanging on their walls might drive home the importance of levee protection.

He created Cut Through the Red Tape for use by the United Way for national promotion of its 2-1-1 dialing system, eliminating the red tape involved in reaching human service agencies following disasters such as Hurricane Katrina. 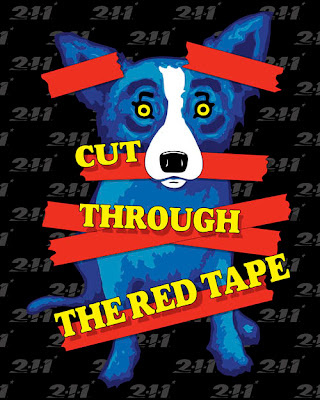 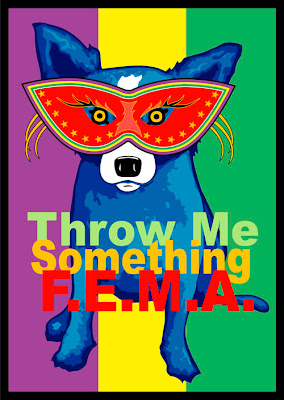 He adopted the design for You Can’t Drown the Blues from an old jazz photo, reinforcing the importance of our culture, the very heart of New Orleans, and the reason why our city is not only worth saving, but also worth protecting. 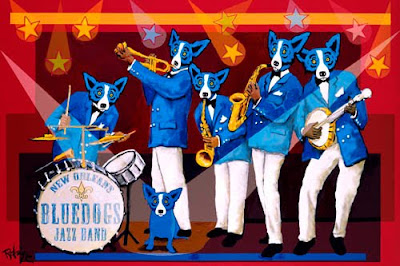 And finally, the most successful of all of the prints from Blue Dog Relief was We Are Marching Again, the strongest sign of optimism from George in this series, timed well with the parallel hope and pride reverberating through a city desperate to look forward and pull itself out of its depression. 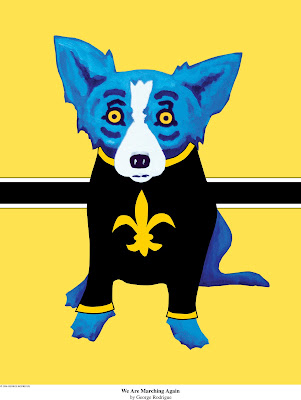 In retrospect, Blue Dog Relief began not with We Will Rise Again and Hurricane Katrina, but with God Bless America, George’s response to September 11th, 2001. (pictured here, and detailed in its own post). 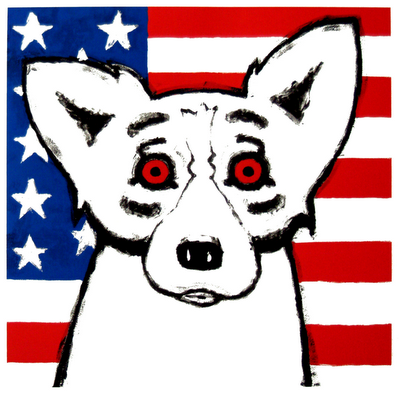 It continued in 2003 with Honesty, a silkscreen collage from paintings of peace by children from around the world. (pictured below and detailed in the post “Eisenhower and Higgins”) 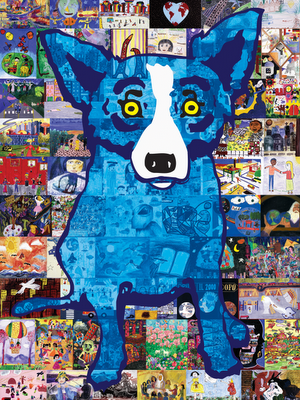 But it was after Hurricane Katrina in 2005 that the series became a daily part of George’s efforts and our lives. Following We Are Marching Again, Blue Dog Relief continued when he collaborated in 2007 with Drew Brees (pictured below) to raise funds for the Brees Dream Foundation through sales of prints of the Quarterback's portrait. 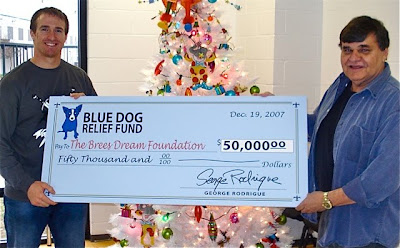 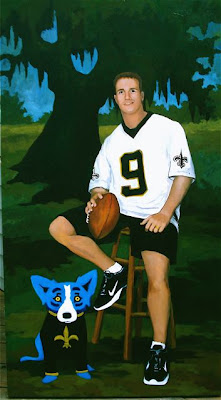 This partnership grew out of our relationship with the New Orleans Saints football team, especially Rita Benson LeBlanc, who championed George’s efforts with Blue Dog Relief with extensive and enthusiastic promotion of the print We Are Marching Again during the 2006 football season. There is no doubt that we owe the tremendous success of this print to the Benson family and, of course, to the generosity of the Saints fans. 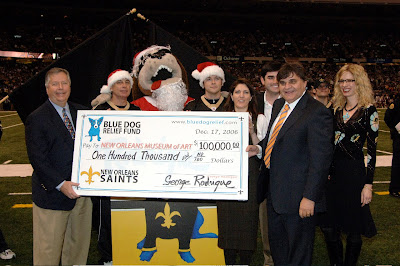 So how much money are we talking about? All together Blue Dog Relief raised nearly $3.5 million for humanitarian organizations such as the Red Cross and United Way, arts organizations such as the New Orleans Museum of Art and the Louisiana Philharmonic Orchestra, and educational programs, such as the International Child Art Foundation and the Louisiana Endowment for the Humanities. In addition, we gave money away to nearly every needy cause that came calling, whether a musician who lost their instrument, an artist who couldn’t pay their rent, or a family in need of food and shelter. Frankly, as long as we had it in the fund, it went to good use.

Furthermore, through Blue Dog Relief we not only supported our staff, which was hard at work processing, packaging, and shipping these orders, but also we encouraged and noticed a change in them, as the program filled their own needs to help New Orleans, even as they struggled with their personal losses.

In a way this mindset transferred to the thousands of people who bought these prints as well, along with the New Orleans Saints and the many publications, websites, and other media that promoted the program. Through Blue Dog Relief, many people found an outlet for their generosity and their need to help. 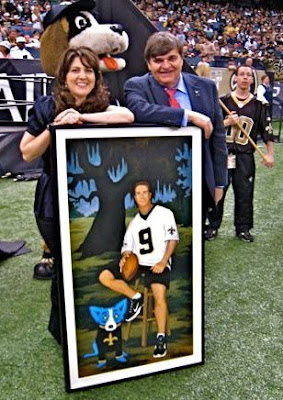 Eventually George (along with the rest of us) felt it was time to move on, and Blue Dog Relief faded from our day-to-day efforts. Its impact, however, remains, and in its place George founded the George Rodrigue Foundation of the Arts (GRFA), promoting the arts in all areas of education through scholarship programs, art supplies, and various opportunities such as lesson plans, exhibitions, and school visits.

Through GRFA, George focuses on something close to his heart and constantly in need of attention: education in the arts. In the past eighteen months we’ve been approved for non-profit status, hired a full-time GRFA staff, launched a scholarship arts contest, honored our first award recipients, held student exhibitions, developed lesson plans, and hosted thousands of students with programs both in George’s gallery and in individual schools. We've also joined with hospitals and donors to install artwork, teach art therapy, and visit with patients at children's hospitals in Texas, Tennessee, and Louisiana. 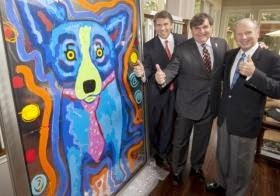 In addition, although we no longer offer the Blue Dog Relief prints to the general public, we do make them available to non-profits through GRFA. In this way, we raise funds not only for our programs, but also for many other worthy causes. (for information, see GRFA’s print donation web page)

GRFA is a full-time commitment and, best of all, a way for George Rodrigue to contribute to a meaningful and personal cause, with an on-going and positive result. The disasters that inspired Blue Dog Relief, unfortunately, seem to keep coming. However, thanks to GRFA and its programs, we’re no longer waiting around for the next one.

For information on donating to the George Rodrigue Foundation of the Arts, see the headline “Do You Enjoy Musings?” to the right of this post.

And for stories about our fabulous New Orleans Saints, visit the posts Who Dat?! (one of my favorite posts of the year) and, following the Super Bowl, A Happiness Epidemic