Color Me Happy (At the Easel)

I spent this week watching George Rodrigue at his easel. Although I’ve seen him paint hundreds of canvases over the years, the process still amazes me, as he takes a blank canvas and turns it into something else. The subject is not a still-life he interprets or a posed model; rather, he invents something from thin air, painting what comes up inside of him, as opposed to the view from his studio window.

“How do you know what you’re going to paint?” People ask him. 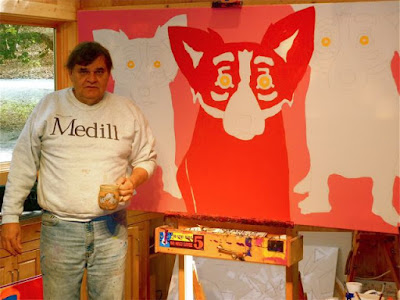 And remember, the Blue Dog is something he created from his imagination. Even after hundreds of paintings, it is still something that started within George’s head. (see the post: Blue Dog In the Beginning)

Months ago I wrote about George’s Oak Tree paintings, specifically that he never painted an actual tree. Rather, even though he used both staged photographs and images from his mother’s album for the Cajuns, the trees, just like the Blue Dog, come from his head.

And so I watch him, wondering Why this shape here, and why that color there? As the painting develops, I see not just the interesting design of the dog itself, but also the ones around the dog and between the shapes, so that there’s no real background or subject stronger than the whole completed picture. 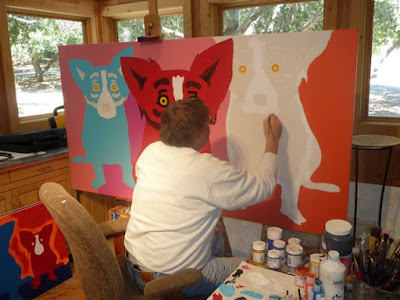 What seems at first like a mistakenly pale blue shade to my eyes, becomes the anchor for a new palette of colors, resulting in another painting of Blue Dogs --- but one completely like no other. 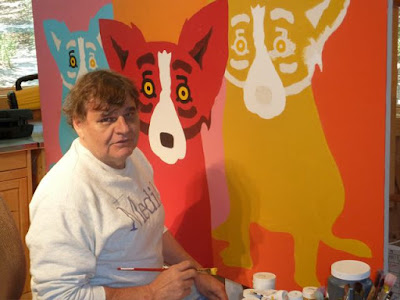 It is this endless variety, the same process that inspires him to paint hundreds of imaginary oak trees over the years, that keeps the Blue Dog exciting for George. At this point he’s broken so many rules in art that there are none left worth worrying about. He found his own path years ago, resulting in several unique series of works which, whether Cajuns, Blue Dogs, Hurricanes, or Bodies, are recognizable as paintings by George Rodrigue. 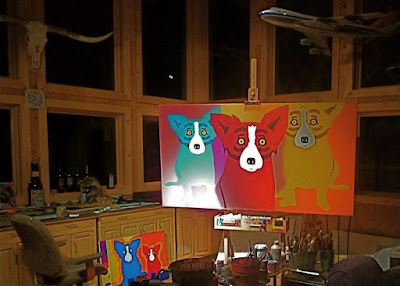 I’m reminded of a copyright dispute over George’s art in the 1990s. The argument was made that he had lost full copyright ownership (retaining only partial) to anything that was ‘in the style of a Rodrigue.’ George argued that all of his paintings are different except with regards to style:

“If I lose this case, then I’ll never paint again,” he commented, a direct challenge to the original intention of copyright protection.

“But why?” asked the judge.

“Because that’s the only way I know how to paint.” 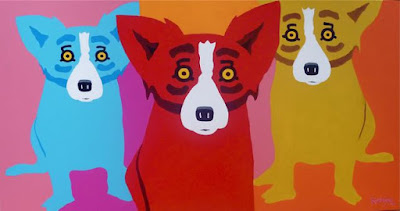 Throughout this post: Color Me Happy 2010, acrylic on canvas, 42x78 inches

Coming this Saturday: "There is No Bacon in Space (Having Fun Discussing Art)"