There is No Bacon in Space (Having Fun Discussing Art)

For several years I hosted an art discussion group in the Rodrigue Gallery of New Orleans. Composed of gallery staff and the occasional friend or family member, we spent a few hours once each month covering everything from the latest show at MOMA to the current buzz on Julia Street.

We related at least one artist each meeting to the art of George Rodrigue. For example, as he worked on the figurative series Bodies, we looked at artists Philip Pearlstein, Lucien Freud, and Eric Fischl. We looked to Chuck Close for comparisons related to large-scale printmaking techniques for both Bodies and Blue Dogs, as well as the (literally) in-your-face repetitive heads, so similar and yet so different from piece to piece. And of course it took two meetings to banter the phases of Andy Warhol’s imagination, production, and business.

We were not a sophisticated group* (nor do I purport to be a sophisticated art-blogger), but we held open discussions in which we pondered the work of contemporary artists on both the American and global scenes, sometimes as it related to George Rodrigue, and sometimes not.

I mean, What happened to the Italians?, someone sighed one meeting. Since when did the self-taught Francesco Clemente (b. 1952) replace Caravaggio? 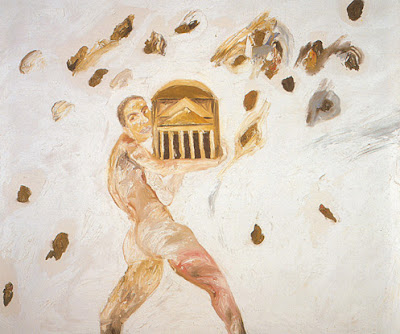 (pictured above, Clemente’s Perseverance, in which the artist himself carries the Roman Pantheon as excrement rains from the sky)

Eventually show-and-tell took up a good bit of our time, usually involving Rhonda’s latest artsy find within Vanity Fair or The New York Times, or Douglas’s craze over a Matthew Barney project, the Metal Museum, or the latest Joseph Beuys felt-and-fat installation, a show he feels compelled to see as often as possible before it disintegrates, prompting regular and whirlwind art trips to Houston for a few hours spent with a display case full of garbage (literally).

At Douglas’s insistence George and I visited (and enjoyed, I might add) the Beuys show at the Menil. We did experience an awkward moment in the bookstore when I inquired about the video showing the famous artist locked in a gallery with a coyote, a performance lasting three days and nights. I thought the movie would be the perfect on-going backdrop for Douglas’s office. The offended beatnik behind the register responded:

“That is a piece of art. There were only seven copies made. It’s priceless. You can’t buy it!”

(As I blushed and apologized, I remember wondering if they’d been able to place the seven copies. Today I notice that excerpts of the film are widely available for free on-line.)

Art makes us look at things, at life, in a different way.

To this day I can’t drive Highway 287 between Wichita Falls and Amarillo without thinking of Bernd and Hilla Becher and their photographs (pictured) of factories and grain silos, a popular topic during one discussion group. 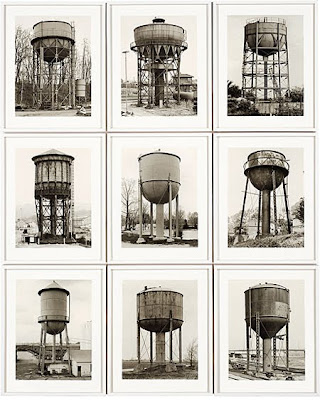 It wouldn’t surprise me if the German Bechers are unaware of this stretch of West Texas, and yet thanks to them the steel structures stand (to my eye) as more inspiring than utilitarian, especially on a grey, no-shadow day. (For related posts, including George's photos of grain silos, visit "Big Dog in Texas"; for more of our favorite Texas landmarks, see the post “Crossing West Texas and the Moo-Cow Blues”)

After two years, our art discussions ended in 2004. But the art we studied remains with me, and I do believe with at least some of the others. I’m not sure that they weep at the sight of water towers, but I feel fairly sure that they remember.

We had a few treasured vignettes and stolen catch phrases worth sharing even now.

The artist James Rosenquist’s failed Miami Airport commission unwittingly inspired hysterical laughter in our group. We all related to it with regards to George Rodrigue and his disdain for such projects.** Commissioned in 1980 by Eastern Airlines to paint a forty-six foot mural for their new terminal, Rosenquist created Star Thief (below), only to have it rejected by Eastern Airlines President and former astronaut Frank Borman, who insisted,

“There is no bacon in space!”

And then there’s John Chamberlain, who supposedly can’t throw away a paper coffee cup without someone grabbing it from the trash and requesting his signature, because 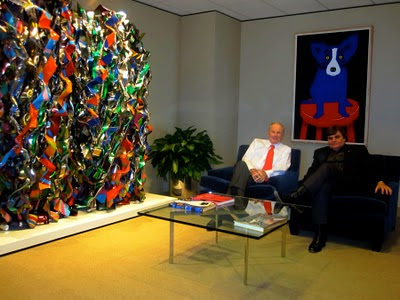 And finally, we had no end of fun with the description attached to the otherwise sobering work of Eric Fischl (below): 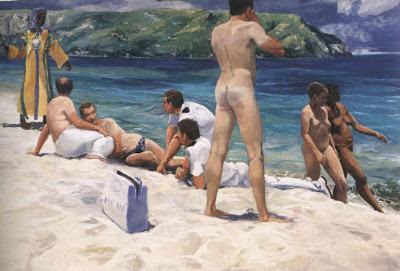 Every once in a while George joined us, weighing in, and usually shaking his head:

“They’re doing the same thing that Duchamp did one hundred years ago. They’ve been on that forever. They just can’t get off of it. So anybody doing anything like me, like Andrew Wyeth, like Norman Rockwell, nothing is going to happen in their lifetime. It just won’t. You’ve got to die, and then they look at the whole body of work, and then they say ‘he’s a genius’.”

“But George,” I countered recently, “ a lot of people would say that you’ve made it.”

“The New Orleans Museum of Art, for one,” recalling his extremely successful forty-year retrospective exhibition in 2008.

“That was ninety percent you charming them and making it happen,” he retorted. 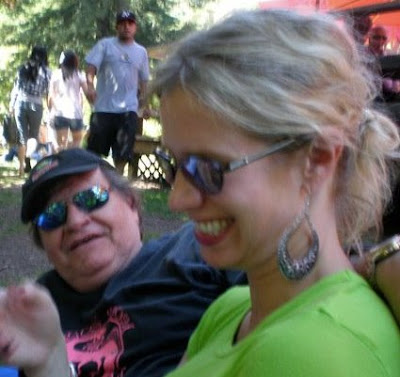 “Well, my charming and talented husband, maybe that’s what it takes.”

*It was actually my mom, an active participant in our art discussions, who talked me into hosting this group. For more on her influence, see the posts “I First Loved Picasso” and “Mignon’s Flowers”

**It is only with regards to a commission, which he rarely, if ever, accepts anymore that I’ve heard George describe painting as work: “I feel like I’m chained to my easel,” he says.

Pictured above, George and Wendy at the Big Sur River Inn, Summer 2010

Email ThisBlogThis!Share to TwitterShare to FacebookShare to Pinterest
Labels: business, Other Artists