Blue Dog in a Landscape

After more than forty years and thousands of paintings, it is the dog-in-a-landscape that stands out as George Rodrigue’s most popular subject. 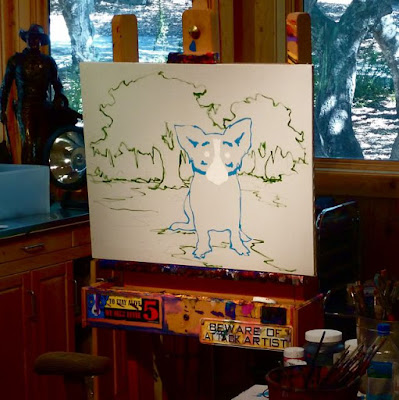 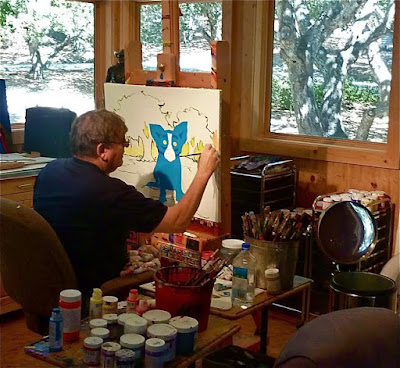 The first Blue Dog painting (1984) depicts a scary loup-garou in a landscape (pictured here), a style that continues for the following five or six years. These early Blue Dog works combine George’s established landscapes, including the dark oaks cut off at the top, with a new strong image, a ghost dog said to lurk in bayous and sugar cane fields... 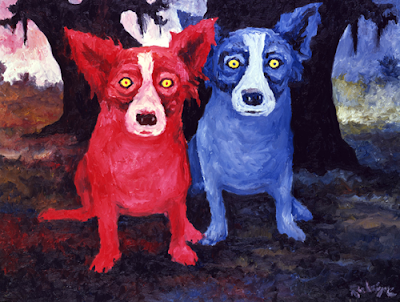 ...and later, the spirit of a studio dog on a journey to find her master.

(pictured, The Re-birth of Tiffany, 1992; for more on the Tiffany paintings, visit here) 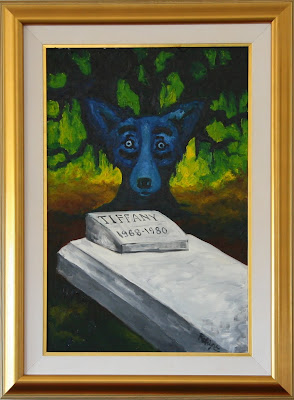 By the early-mid 1990s the Blue Dog leaves the landscape, as George transports it to surreal and varied locations within his imagination. Although rooted in Louisiana, the dog becomes an entity that grants access to a wider subject matter, allowing George to comment on life today, in direct contrast to his Cajun paintings, which he designed to reconstruct and preserve the past. (pictured, My Acadian Heritage, 2007) 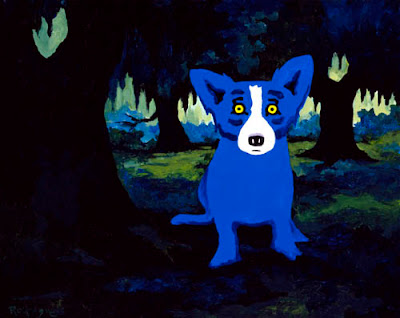 Yet throughout these changes, from the Cajuns to Blue Dogs to Hurricanes and Bodies, George Rodrigue holds on to Louisiana through the Oak Tree. 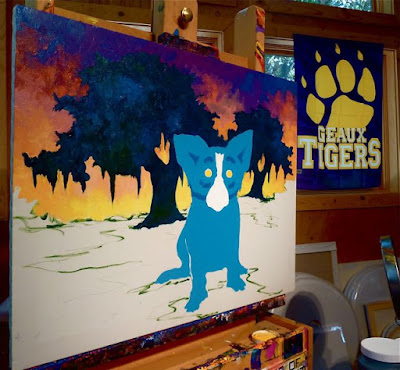 It’s a consistent thread throughout his work, and it’s a persistent subject that changes right along with changes in the Blue Dog Series. (see the Blue Dog links under 'Popular Musings' to the right of this post) 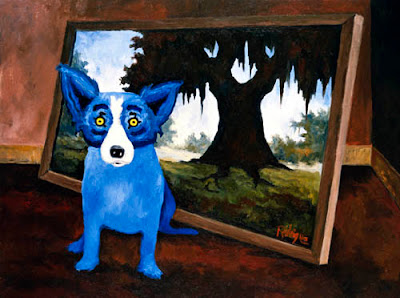 Like the Blue Dog, from the beginning the Oak Tree is a well-defined, hard-edged shape particular to Rodrigue. He paints the dog not as a small animal at a person’s feet, but rather as a person itself, large-scale and eye-level. The Oak Tree also has specific and unusual characteristics, such as its foreground location and its odd shape, cut off at the top, rather than the background location and birds-eye view of traditional landscapes. George pieces the dog and tree together like a puzzle, almost as if the tree locks the dog into place. 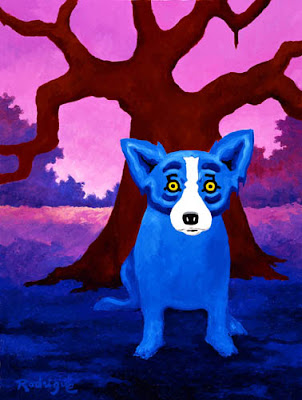 In the abstract works of 2001-2003, the Oak Tree, although not as consistent a subject matter as the dog, is just as stylized. 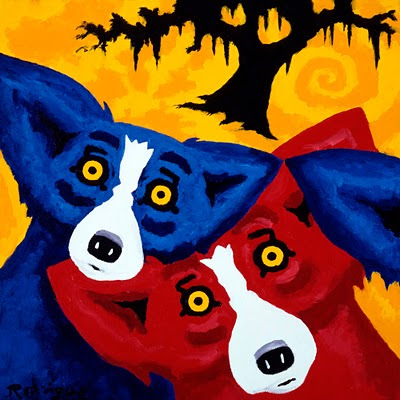 Similarly, both the Blue Dog and the Oak Tree splinter, as if in search of definition (and a hard edge) in the post-Katrina paintings. 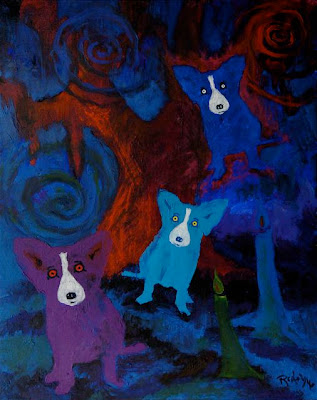 As with George’s Cajun paintings, these dog-in-a-landscape canvases are more popular, ironically, outside of Louisiana than within the population that, like George, has oak trees in its backyard and grew up with stories of the loup-garou. 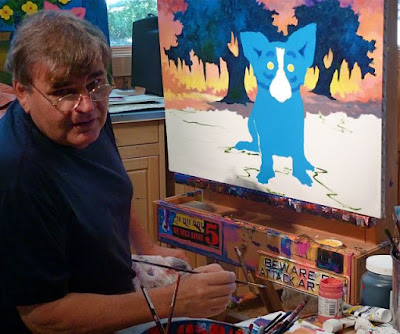 I’ve heard George say many times that his Cajun paintings are most popular among a non-Cajun audience, one that in many cases never lived in Louisiana nor (certainly in the 1970s) heard the word ‘Cajun.’ According to George, this has to do with how he paints and how he interprets his world. His style is unique and well-defined, and this ensures his longevity and his wide appeal, beyond his regional subjects.

Several years ago, inspired by the Bodies series and a new water-based oil paint, George approached his landscapes in oil for the first time since his necessary switch to acrylics some twenty years ago. He could hardly wait to revisit this classical subject with these paints, and the result is rich and full of depth, a quality more difficult to achieve in the fast-drying acrylics. 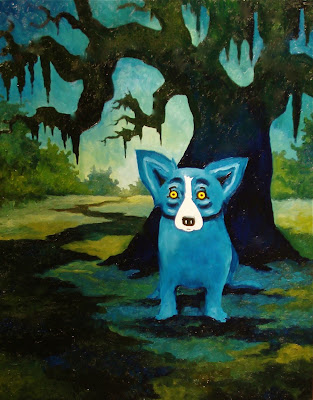 Today George continues to paint the dog in a landscape. However, as is typical of his recent work, most pieces are bright colored, in acrylic paint, and large scale. There is little that resembles an actual landscape, and indeed the paintings, although the titles occasionally suggest otherwise, do not reference any place in particular. 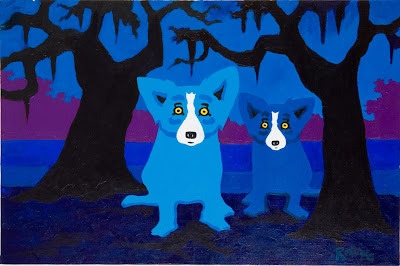 Acrylic paint provides George with the neon colors and abstract, hard edges that he desires most on his canvas today. These are a long way from the black oaks of the late 1960s and early 1970s (See the post "Early Landscapes" for images). 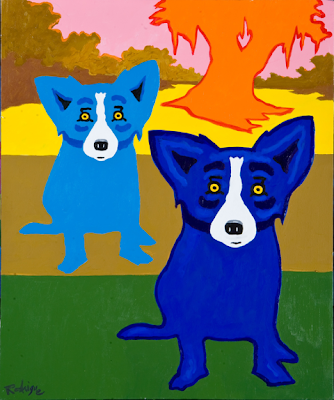 But isn’t that how it should be? It’s true that after forty years, George Rodrigue still paints the Oak Trees. And after twenty-five years, he still paints the Blue Dog. (The same can be said for Jolie Blonde, a subject since 1974.) However, neither subject as painted today could be mistaken for its earlier counterpart. 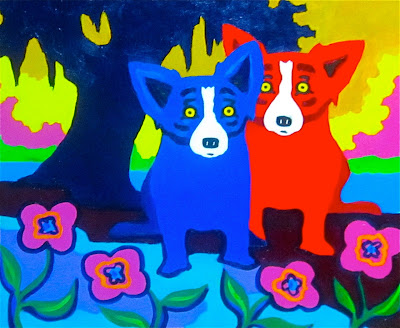 George says that in order for him to keep painting,

“My work must be fresh. It has to be exciting for me. It can’t be the same old thing.” 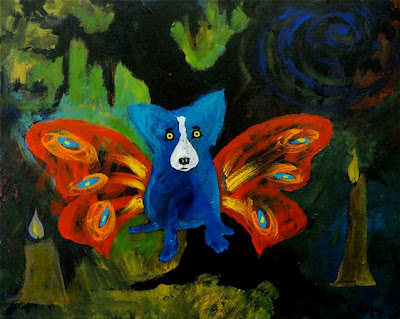 It’s an ironic statement coming from an artist associated so strongly with repetitive imagery. Indeed he chose specific subjects, stylized them, and painted them over and over, ever since his first exposure to Pop Art in Los Angeles while at Art Center. And yet, if you’ve followed his work since 1967 (or even this blog over the past year), then you know that George’s words are true. I mean, how many thousands of landscapes by thousands of artists exist in the world? How many paintings of dogs? And yet, George Rodrigue’s are unique to him. There is nothing redundant about them; nor, even as he’s grown and changed on his canvas, would they be mistaken for someone else’s work. 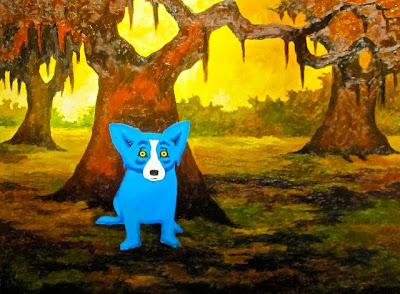 This distinction is an immense accomplishment for George while, at the same time, an on-going challenge. In short, it keeps the work ‘exciting for him...' 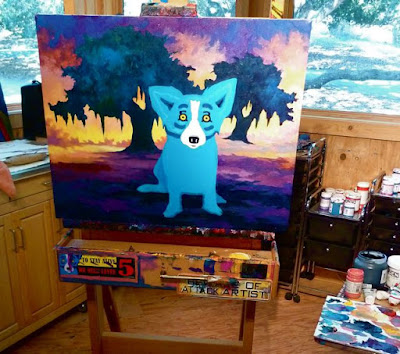 ...and, judging by the on-going wait list for paintings of a 'Blue Dog in a Landscape,' exciting for the rest of us as well. 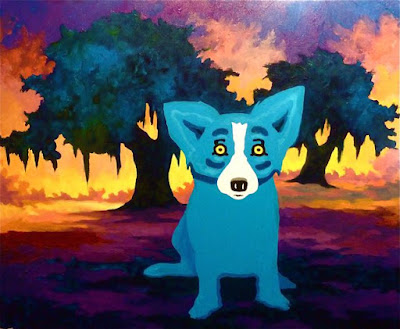 The painting pictured above and in progress throughout this post is October Sunset, painted September 2010 in George Rodrigue's Carmel studio, 24x30 inches, acrylic on linen