After painting the Aioli Dinner in 1971, George Rodrigue’s confidence soared in rendering not only the Cajun figures, but also a style all his own. During the six months it took to complete the painting, he developed specific rules for himself, things separate from and often contradictory to the established rules of art.

He would shape the trees and bushes around the figures, he decided, so that their heads never touch the sky. In this way his paintings became puzzles, as he manipulated everyday scenes into highly structured designs. His figures were locked in, unable to move without disturbing this serene snapshot existence of their world, the world of nineteenth century Acadiana as George envisioned it.

Because his motivations involved his concern for a dying culture, he painted as though compelled to trap slices of time. This also granted him license to light his figures, even when all reason tells us they should live in darkness, beneath the trees. In Rodrigue’s painted world, the Cajuns shine in white as though their actual bodies are light bulbs, illuminating them in the dark Louisiana landscape and within a culture known for seeking shade, whether beneath the trees or on the front porch of their houses. 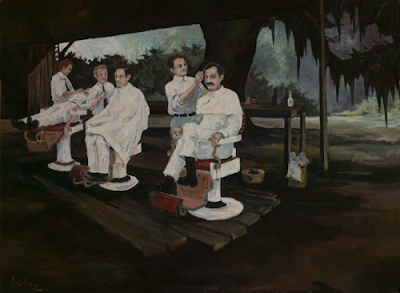 Glowing white with their culture, the figures in Broussard’s Barber Shop (1971, 30x40) sit beneath an overhang as opposed to within a building. In this way the oak trees, so important in their culture, maintain the structure of their world, holding it together by framing their bodies and, in a sense, the very essence of who they are as displaced Acadians living in Louisiana.

According to George, the Broussard Brothers started the first Barber Shop in the New Iberia area near the turn of the century. On a limited budget they spent all of their money on their barber chairs, leaving nothing in their pockets for a building. Undaunted, they cut hair beneath the trees.

I’ve heard this story from George for twenty years and, since my hope is to be as accurate as possible in these essays, I questioned him further,

“So George, that’s true, right? I mean, did your Mama know these guys? Did your Daddy get his hair cut there?”

“Um, no. I don’t ever remember them talking about this place.”

“But you’re sure it existed, this portico in the woods?”

“Then you made it up?” I asked, rather carefully.

“Oh, I don’t know! Does it really matter? After all these years, can’t it just be true?”

Similarly, I asked him about the photograph on which the painting is based. Was this place in New Iberia? Was it called Broussard’s Barbershop? Where did he get the picture? 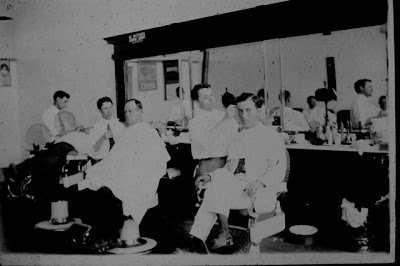 “Just say it came from my mama’s album. I have no idea.”

If ever there was an argument for recording all of this stuff, this is it, I thought to myself…

I did manage to glean a few believable notes. For example, (and this is so typical of George) the chairs reminded him of the one he sat in as a boy when he went to the barber. This is an important memory for him! (Can you imagine? I mean, who remembers things like that?)

The chair was so important to George in fact, that he spent several years searching for one, finally tracking it down at the Ragin’ Cajun Junk Shop in Ville Platte, Louisiana in the 1980s. In an effort to recreate the exact memory, he spent another six months restoring it. He covered the seat of the white porcelain chair in red leather and re-chromed all of the metal parts. 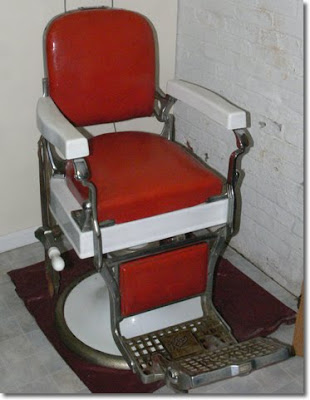 (This photograph, which he found on the internet, is exactly like his chair, George swears)

Weighted with oil to run the hydraulic lift, the heavy barber’s chair sat for years in the corner of George’s studio in Lafayette and later Henderson, and then Butte la Rose, Louisiana, until it made its way in 1995 to his restaurant, Café Tee George, where it joined other novelty items and memorabilia. Unfortunately, the restaurant burned just a few years later, and the only thing salvaged was a moose head mount, painted blue, and now hanging over the door of the Blue Dog Café.

Ironically, there is an actual Broussard’s Barbershop located for the past seventy years in Lafayette, Louisiana on Pinhook Road, just a block away from both the Blue Dog Café and George’s first gallery. I asked George,

“Is that where you got the name?”

“I don’t think so. I think I just made it up. I never got my hair cut there, and I never much thought about it.”

He did say that not long after he finished the painting, some men from the barbershop approached him to purchase a print.

“I remember telling them that it was $25, at which point they decided it was too expensive and dropped the idea.” 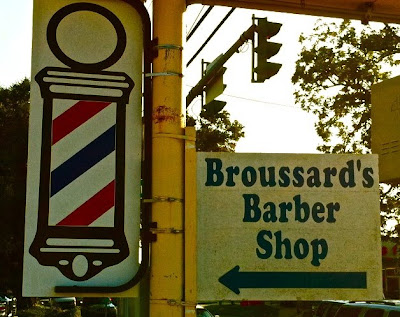 Many years later (thirty-five, according to George) as he walked by the window, he noticed the print hanging on their wall. He peeked in and asked about it, knowing they didn't purchase it from him. The barber told him,

“We really love that picture. We had to pay a lot for it…. Now who are you again?”

Melding fact with fiction comes naturally for George. Just last night we attended a formal fund-raising dinner and, once dressed, I asked him how I looked.

“You look great,” he said, still adjusting his coat.

“But you didn’t even look!” I pleaded, and then twirled around in front of him.

Minutes later we arrived at the event, a magical setting in the courtyard of the Old Ursuline Convent on Chartres Street in the French Quarter. As we stood in line to enter, a woman tapped me on the shoulder and whispered,

“Honey, would you like me to zip your dress?”

Coming this Saturday: “The Ragin’ Cajun”