Like most of you, what I remember vividly about September 11th 2001, is a never-ending televised replay of airplanes flying into the World Trade Center. I have another memory though, just as vivid, of my nephew William Parker, only a few months old, lying on the floor and laughing up at his mom and me as we stared, devastated and shocked, at the coverage. 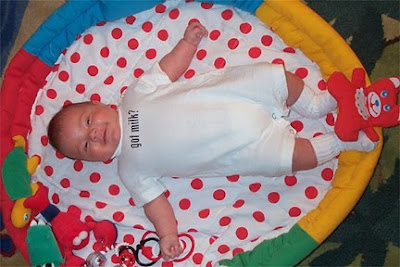 What kind of world has he entered? What will happen to the children born today into this hatred, into this willingness to sacrifice not only one’s own life, but also the lives of strangers, the sanity of their loved ones, to leave children without parents and husbands without wives, and the ability to kill with abandon not on a battlefield, but on a beautiful late-summer’s day, in a thriving modern city, with no warning at all? What will happen to this child?

George Rodrigue sat behind us, and he too stared between the television and the baby. It wasn’t until late that night, unable to sleep, that he faced his feelings and painted. 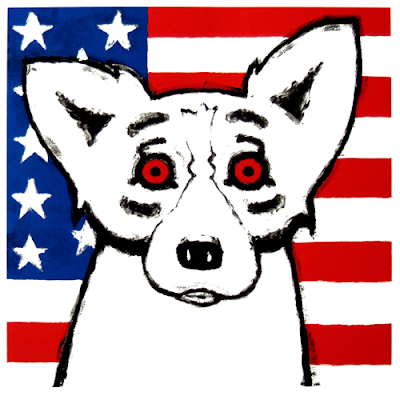 “On the night of September 11, 2001, like Americans everywhere, I sat in shock over the events of the day. As I’ve done many times in my life, I turned to my easel and paints for comfort.

At 5 a.m. the next morning I stared with my wife at the painting I’d just finished. As we looked from each other to the canvas, we knew that I’d made a powerful and accurate statement of our feelings. We discussed our desperation --- our wanting to help in some way.

I realized as we spoke that in donating the sales from a print of this painting to the relief effort, others might be comforted as they dealt with their own grief and desire to help. Created in the depths of my personal sadness, the painting reflects the feelings of many, many people.

I first thought to paint the dog black, as if in mourning. Instead I painted it without color at all, the blue joy drained by shock and grief. (Some people have commented that the lack of color reminds them of the television footage of debris-covered people running on the streets of New York City.) For many years the dog has had yellow, happy eyes. On this day, however, the eyes are red, indicating a heavy heart.

I am proud to be from the United States of America. It is our spirit, strong in the symbol of our flag, which will mend our broken hearts and allow us to use these events to strengthen our courage and compassion.” G.R., 9/12/01

Sales of prints from God Bless America raised $500,000 for the American Red Cross. The one thousand prints pre-sold within just a few weeks, without a postcard or on-line ordering, as word spread through our personal e-mail list. People shared the offer with their own email lists, and before we had the prints in hand to ship, the money was on its way.

We were shocked not only by this widespread generosity, but also by its cultural diversity, as we took orders from the Middle East, Canada, Europe, South America and the Orient. George’s painting reflected the feelings of many people, and they placed their faith in him to deliver the money to the American Red Cross, despite the fact that we did not have the legitimacy that accompanies non-profit status. In addition, people paid their money immediately, even though it would be months before the prints were ready for shipment.

The experience was eye-opening for us on many levels, and it quickly developed into Blue Dog Relief, which raised several million dollars following Hurricane Katrina. This in turn inspired the George Rodrigue Foundation of the Arts (GRFA), now distributing funds, art supplies, scholarships, lesson plans, and more with its 501(c)(3) non-profit status. 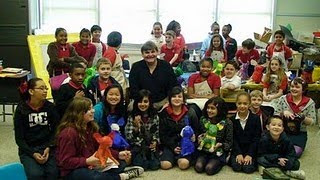 George and I lost a dear friend today, a strong supporter of GRFA and many other cultural programs within our state. Ken Hollis, a long-time State Senator from Louisiana, lost his battle with cancer. He was a positive, honest, and dedicated family man, friend, and public servant. At his services next week I will hug his wife and closest confidant Diane and stumble over words of comfort, struggling once again to make sense of something senseless. (pictured, Ken and Diane Hollis at Mardi Gras, 2009) 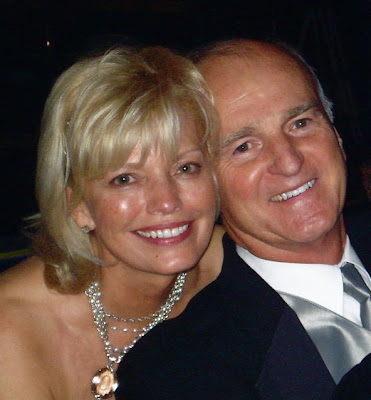 And in sharing the grief of Diane and the rest of the Hollis family, I’ll think of young children and of the potential that does exist for a peaceful world, a potential that exists due to the sacrifices, dedication, and generosity of great men and women. 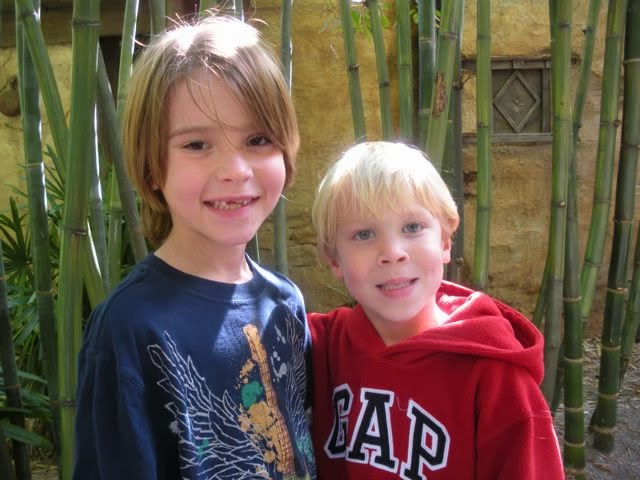 Pictured above, our nephews, Wyatt and William Parker. To read more about these brothers, visit Adventures of a BMX Mom or see the post "Painting with Uncle George."

To learn more about the George Rodrigue Foundation of the Arts, visit here.