(Note: For Facebook, I've amended the 'Modeling' post of 9/21/10, removing any images related to nudes. For further information, see the bottom of this post.)
Griping about the challenges of modeling is humiliating, so I won’t do it. I mean, a model lies on a chaise lounge or perches on a stool or strolls towards the camera wearing costumes, beautiful clothes, or occasionally nothing at all. It’s ridiculously easy, right? Just last weekend, however, as I headed towards a previously scouted site for photographer Tabitha Soren, this talented artist, draped in heavy camera equipment, humbled me with her concern:

“Can I bring you some water?” she asked,

…as if I couldn’t handle modeling without dehydrating.

I’ve modeled for George Rodrigue for many years, sometimes posing as Jolie Blonde and occasionally as myself, but most often as no one in particular. He uses my shape and stance within designs for figurative works, even if he’s using a different person’s face or an anonymous subject.

He’s quite serious during these sessions, occasionally setting up drop cloths and draped backgrounds, or directing me towards a rather uncomfortable perch on a tree branch or windowsill, or sending me, partially submerged, into (sometimes freezing) water. He’s photographed me in this way thousands of times, spending many hours on lighting and directing, followed by Photoshop, for images that may or may not result in paintings. 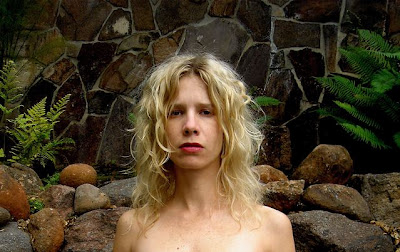 I do admit, with embarrassment, that it took me some time to get the hang of this. The first year’s (maybe two) worth of photographs ended up in the garbage. Like most kids, I grew up smiling and posing for pictures, and George nearly gave up on me several times as he tried to break this habit. I struggled not to look goofy or awkward, and we spent months making me not only comfortable in front of the camera, but also attune to George’s needs, including his preferences for certain poses, hand placement, head angle, etc.

We abandoned make-up from the beginning, preferring the all-natural look, aside from a drop of lip gloss. My hair, he claims, looks better dirty and uncombed for the camera, so that's easy. And clothing, when there is any, is rarely anything other than a prairie-style dress or a t-shirt, jeans, and a broad-brimmed hat. 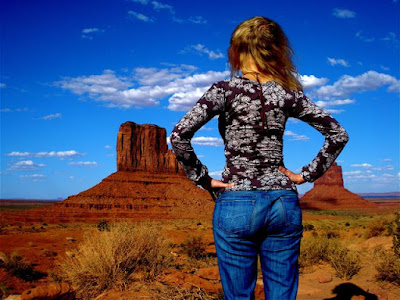 We learned fast that I work better blind. Without my glasses, I'm undistracted. Directions such as “look straight at me with confidence” or “focus on a loss” or “you’ve just risen from the dead” become willing suspensions of disbelief. With the world a blur, my imagination takes over.

This working-blind, for example, may not have helped me this weekend when it came to avoiding sticks and poison oak as I climbed barefoot in the Big Sur wilderness, yet it did make for a more convincing shot when Tabitha directed “you’re being chased by hundreds of wood rats”...

…or (in Palo Colorado Canyon) “by the scary man we passed in that cabin down the road.”

George and Tabitha have completely different needs when it comes to photographs. George uses his images in sections, cutting the figure out of the photograph and pasting it into a painting’s design. In the sketch below, for example, he posed me in a chair in our living room, as opposed to outside among the oaks. (A painting from the Hurricane Series hangs on the wall). 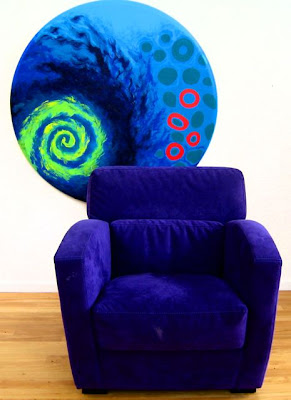 For the Bodies artwork below, I walked down the stairs outside George's Carmel studio, as opposed to stepping off of a tombstone. (photograph posting postmortem)

The actual cemetery photographs (shot at Lake Lawn in Metairie, Louisiana) helped George with concept and placement only. 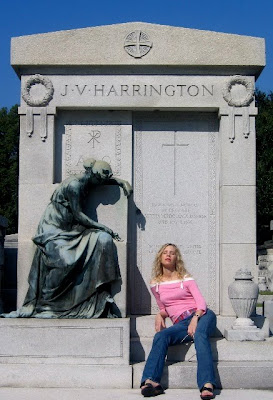 Tabitha’s photographs, however, are the finished artwork. She’s far more concerned with the overall composition and details as she shoots the picture, because she doesn’t have the opportunity later to change it with paints on a canvas.

(Pictured below: photographs by Tabitha Soren shot at 2:00 a.m. She had me hold completely still during the ten-minute exposures so that all movement comes from the light and breeze, whether on the water, in the sky, or in my hair. New Orleans, 2002) 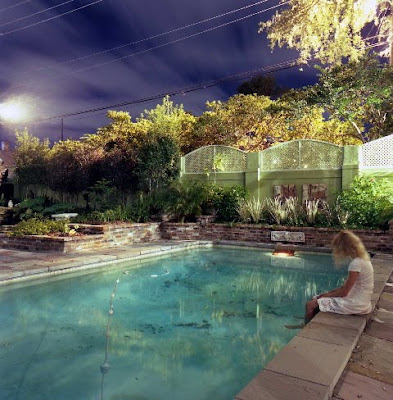 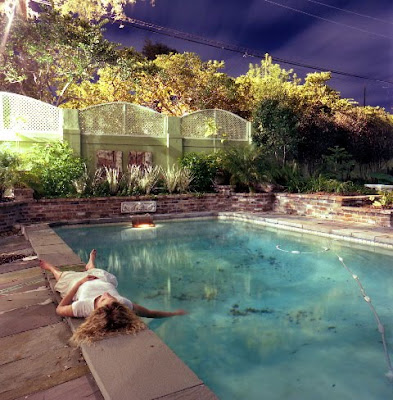 Whereas George lights the model so that he can see the details when it comes to painting, Tabitha’s lighting is an element of her craft, even as she takes the shot. This doesn’t mean that lighting isn’t important to George. In fact, it is a key element, especially in his Cajun paintings. However, the light is unimportant until he sits down at his easel. 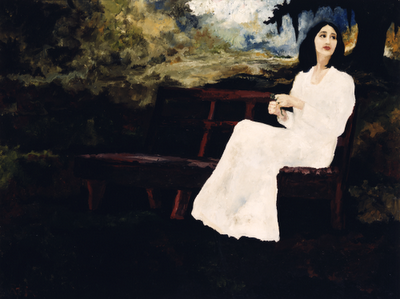 Tabitha’s figures oftentimes (although certainly not always) are less important as subjects than other elements, as in the swimming pool examples above. If George paints a figure, however, that figure is the focus of the painting, with all other elements subjugated to it in a highly ordered and contrived manner. Unlike photography, there is no guesswork, no accidents, and no second takes on George Rodrigue’s canvas. To be clear, neither artist, in the works reproduced here, is going for a portrait. (below: artwork from Bodies, 2003) 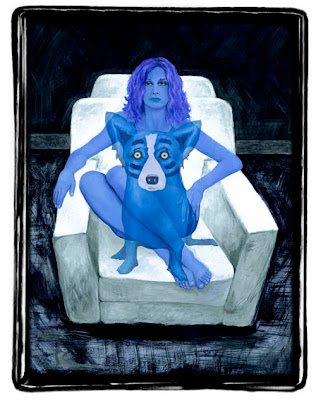 Sunday night, exhausted and yet high on my afternoon brush-with-the-arts, I carefully removed the burrs from my tangled hair, soaked my feet for an hour (after which my friend Barbara fast-tracked her way towards sainthood by removing a dozen or more splinters from my shredded skin), bathed in Tecnu, rubbed icy-hot on my aching muscles, popped an antibiotic (despite George’s thorough inspection for deer ticks), and dropped Tabitha an email of thanks for the beautiful day. 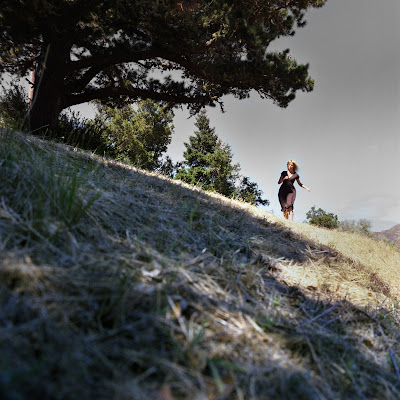 I truly am honored to pose for these artists, creative individuals that I admire and, to a degree, envy, as I think back on my weak and uninspired studio projects from college, along with the pocket-size camera buried somewhere in my closet. Unlike photographers in the fashion world, perhaps George and Tabitha will find use for me even as my wrinkles and ‘muffin tops’ set in.

For the unedited post, including images, visit here. Viewer discretion is advised.

For related posts, visit “The Nude Figure” , “Indiscretion: A Nude Addendum” and "The Muse"