“… a sweep of red carnelian-colored hills lying at the foot of the mountains came into view; they curved like two arms about a depression in the plain; and in that depression was Santa Fe, at last!”*

This month we crossed the country for the second time this year, unable to resist the American West and especially the draw of Santa Fe. George sketched, photographed, and designed, inspired by the place and its people, in particular a journey to Galisteo, an artist’s community thirty miles south of the New Mexico capital. 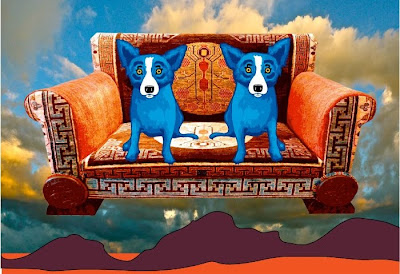 We also enjoyed, thanks to the connections of our friends and collectors Chris and Don Sanders, a private tour of the hidden treasures below the Gerald Peters Gallery in Santa Fe. Our guide, Abigail, shared with us life-size horses by Deborah Butterfield, thickly-painted landscapes by Wayne Thiebaud (famous for his paintings of petit fours and hors d’oeuvres), and the real prize, an original Alfred Stieglitz photograph (below) of his long-time lover, Georgia O’Keeffe (a photograph valued at more than one million dollars). 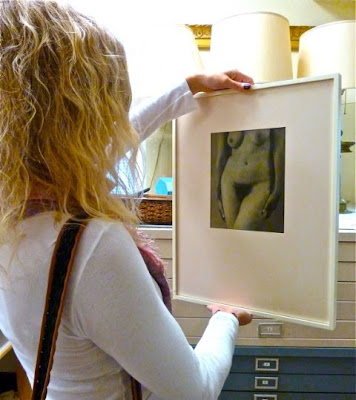 In Galisteo we visited Woody Gwyn, an artist who paints landscapes and, ironically, seascapes within the 18th century hacienda he shares with his wife Diana. We found him working on a long narrow canvas (one foot by fourteen feet) of Bixby Bridge and the Pacific Coast, an area well known to us on California’s Highway One, and a seemingly odd choice within this land-locked, historic Spanish colonial town. 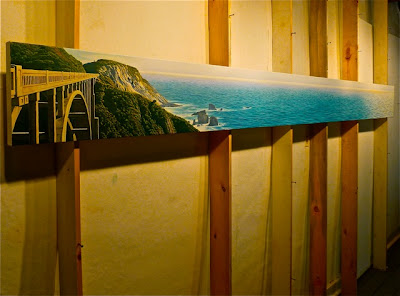 The Gwyns are the third family in three hundred years to own the Doris-Ortiz hacienda. Built in 1703, its rafters originated with the church built on the same site in 1675. The new structure began as a Spanish trading post, followed by a dance hall and casino, and when the Comanche Indians raided Galisteo in 1712, the women and children hid in the house’s courtyard during the battle. In 1846 the structure became a U.S. cavalry outpost, followed by a general store and finally a bar, popular with movie stars in the 1950s.

Most notable, Archbishop Lamy (1814-1888) made the arduous journey from Lyon, France to Galisteo, New Mexico during the mid-1800s. He lived in a modest room within this same house as he supervised construction of the new church, located just across the street, the only asphalt today in Galisteo, a road paved in the 1940s to ensure safe travel of the atomic bomb to the Trinity site. 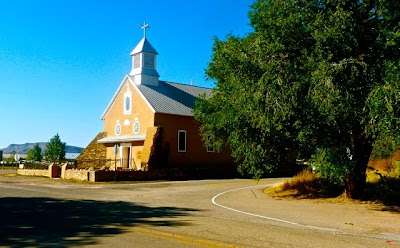 “When you live here, you understand we’re all very temporary and it’s just our turn to take care of things,” explained Diana.

This history envelops Woody Gwyn, along with other artists, reminding them daily that they are part of a bigger landscape. (pictured, George Rodrigue and Woody Gwyn) 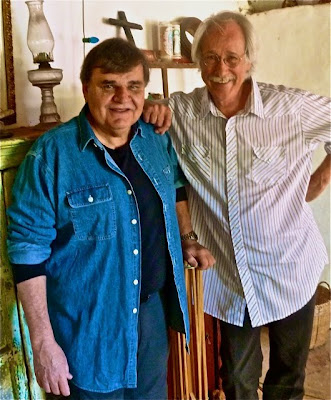 In Woody’s case, this legacy runs beyond the borders of the town and the span of his lifetime, echoing the Northern Renaissance and prompting my comment,
You do realize, Woody, no one paints like this anymore.

“Yeah,” he replied, “all my best friends have been dead now for hundreds of years.”

(I watched George pick up a disposable make-up applicator from Gwyn’s easel. “No brushes,” he mumbled.) 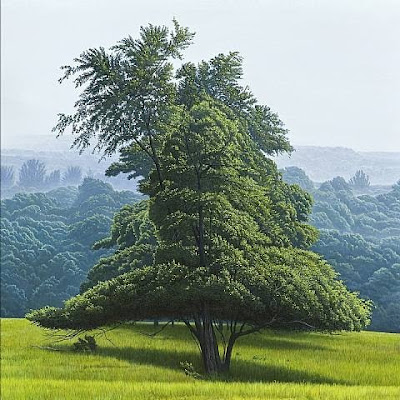 (pictured above, an oil painting from 2010 by Woody Gwyn, 72x72 inches; “I live a life of sensory deprivation,” says Gwyn)

We enjoyed an impromptu discussion of monotypes, editions of one, a process perfected by the impressionist Edgar Degas. To create the prints, Degas used not only oil paints, but also watercolor and gouache, achieving 'a unique atmospheric quality.' 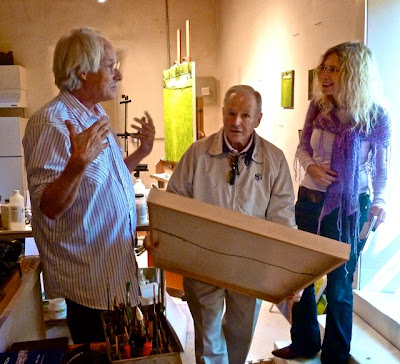 “Kinda fun; like going fishing. You either catch something or you don’t.” -WG


From the Gwyn home, we crossed the dirt road to Priscilla Hoback’s hacienda. A painter and sculptor, Hoback moved to Galisteo in the 1970s. She mines her own clay and colors, firing her heavy wall pieces inside a kiln she made herself, located within the walls of her three hundred year old house. 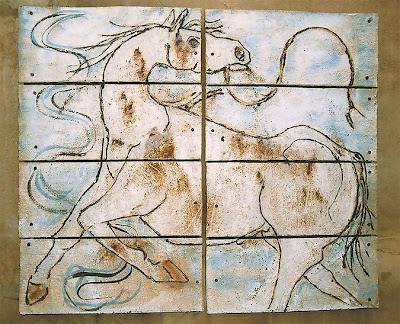 She lives with her dogs, birds, and horses, surrounded by life and activity in a town of two hundred people, more than half of which are artists:

George and I have known Priscilla for years, first through her mother Rosalea Murphy (of Pink Adobe fame, and a wonderful artist in her own right; story here), and in recent years through both her artwork and her friendship. We are enthusiastic collectors of her clay creations, which hang on both the interior and exterior walls of our house. (pictured, George Rodrigue and Priscilla Hoback) 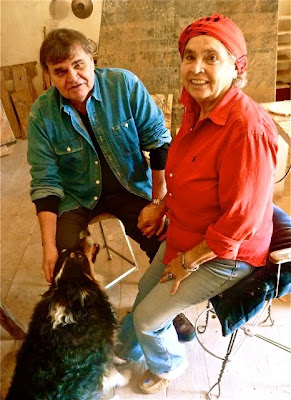 She talks not only about her own work, but also of Woody’s, her ‘poker buddy,’ a ‘fantastic character,’ pointing out his paintings hanging throughout her house, along with those of another Galisteo friend and artist, Fritz Scholder (1937-2005), who gifted her with small paintings of green birds. (pictured, Don Sanders looking at paintings by Priscilla’s friends) 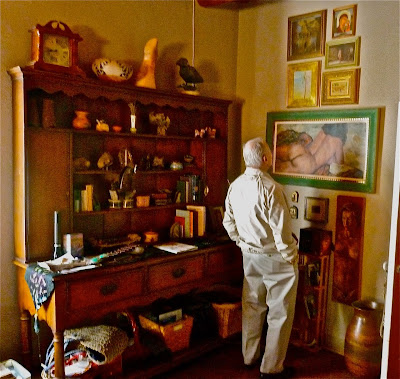 She questions George about his work, and I sit on the side and watch these artistic friends show genuine interest in each other’s projects.

It’s a similar scene of friendship and art back in Santa Fe, where we join Doug Magnus for a tour of his workshop, studying the equipment and processes used to create his handmade designs in gold, silver and turquoise. (pictured, ‘the vault’ at Magnus Studios) 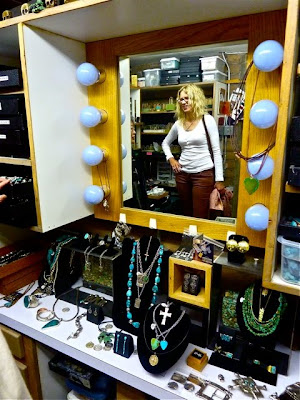 Indeed before we leave Galisteo, Priscilla supports her old friend,

“Have you seen Magnus? There’s a show of his paintings in Santa Fe this afternoon.”

We meet up with the jeweler, who seems embarrassed by his ‘vintage’ paintings:

“You have to keep it up," he explains. "Painting is one of those things you can lose; I have to feel comfortable with the brushstroke. These are those kinds of paintings, the ones I created after I hadn’t picked up my brush in a long time.”


George and I love them, and we bought one, a painting of an adobe house in the snow, foreshadowing the Christmas holidays we’ll spend in Santa Fe this December. 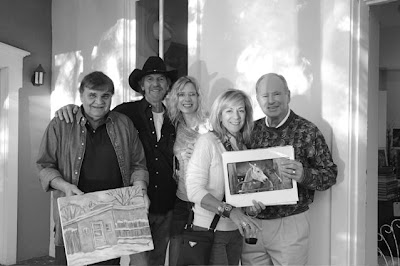 It is in Santa Fe that George experiences artistic camaraderie. He admires these artists, their works, and their techniques. He gets lost in discussions of kilns, photography, and turquoise, almost shy when Woody suggests they work on monotypes together during our next visit, or when Priscilla hints (with obvious admiration) for signed copies of his latest books.

He feels understood here in a way that eludes him in south Louisiana, an area where, perhaps just because it’s home, the Blue Dog as a concept supersedes the Blue Dog as a piece of art, where public familiarity and misunderstanding blur the artistic, symbolic, and even civic intent of his work as far back as his Landscapes and Cajun Paintings, and where the Blue Dog Man overpowers the curious, intense, small-town (at heart), down-to-earth and devoted (always) friend, George Rodrigue. 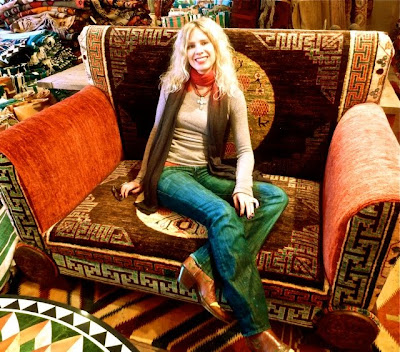 to learn more about Rodrigue’s Santa Fe history and paintings, see the post “Rosalea Murphy, the Pink Adobe, and Paintings of Evergreen Lake"

unless otherwise noted, all photographs in this post are by George Rodrigue, October 2010

pictured above, a casual shot during a modeling session (notice the couch in the first image in this post, a working design); although this photograph probably won't result in a painting, it is George's favorite, he says, because I look like my mother...