The Cajun Bride of Oak Alley

By the mid-1970s George Rodrigue spent his days scouting for subjects and his nights painting the Cajun culture. He concentrated on area traditions, such as The Aioli Dinner and The Traiteur (Cajun faith healer), famous locations such as Broussard’s Barber Shop and The Ragin’ Cajun Antiques, and legendary figures such as Jolie Blonde and Longfellow’s Evangeline.

If he wasn’t quizzing his mother or scanning her photo albums, he was asking local characters about their favorite tales, oftentimes following leads to obscure locations throughout southwest Louisiana.

This was the case with Oak and Pine Alley, a magnificent stretch of trees planted by Charles Durand, a local sugar cane farmer, in the early nineteenth century in St. Martinville. 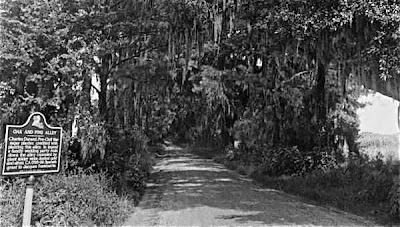 George was familiar with the wedding story of Durand’s daughters, and he sought out the alley for further inspiration. (Oak and Pine Alley pictured above as George saw it in the mid-1970s and below as it stands today, following several major hurricanes). 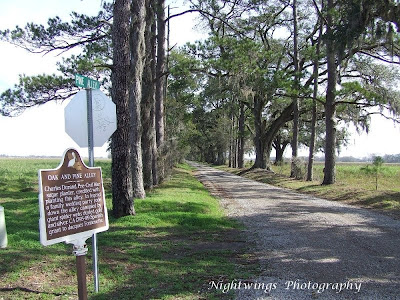 From Memories of St. Martinville by Charles Larroque (1999, Pelican Publishing):

“Oak and Pine Alley was planted by the slaves of Charles Jerome Durand around 1829. The three-mile alley leading from the Bayou Teche to Durand’s house was a veritable landmark, leaving no doubt as to the social position of the property owner. Like the sugarcane he planted, Durand’s imagination knew no bounds. The plantation family was awakened each morning by servants spraying perfumed mists. After baths in scented waters, daily routines began with promenades in gold-ornamented carriages rivaling even those of Versailles.

In 1850, on the occasion of the simultaneous weddings of his two daughters, Durand’s slaves decorated the arboreal alley in a manner befitting his most eccentric nature. Prolific web-spinning spiders were brought in (some say from the nearby Atchafalaya Basin, others say from as far away as China) and were released in the trees to go about their arachnidan business. Then slaves went to their task of coating the dewy, billowing webs with gold and silver dust blown from bellows. And under this splendidly shimmering canopy proceeded the ethereal promenade of the wedding party and its two thousand guests.” 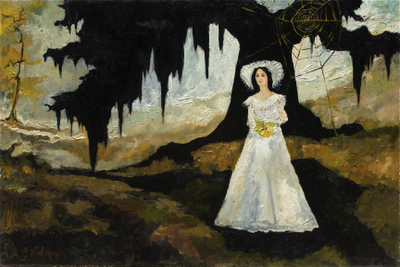 George painted The Cajun Bride of Oak Alley (1974, 24x32 inches, oil on canvas) based on this story. By her solitary stance, however, she also references Evangeline, as though waiting for her lover, her Gabriel, beneath the oaks. Typical of figures in his Cajun style, the bride is timeless, a ghost not shadowed beneath the tree as one would expect, but rather brightly lit and all in white.

He rendered her this way not only because it is her wedding day, but also because she glows with her culture. She stands facing the alley, with her back to the Bayou Teche. It appears that she is cut out and pasted onto the oak tree, pasted onto Louisiana, forever captured by both a magical story and a romantic painter.

For more Rodrigue paintings related to St. Martinville see the posts “Musicians” (specifically the part about the Romero Brothers, one-third into the essay) and “A History of Evangeline in Rodrigue Paintings”

I’ve avoided commercialism in this blog; however I would feel remiss if I did not tell you that George recently created a silkscreen print of “The Cajun Bride of Oak Alley.” Early lithographs of his Cajun paintings are dark and without the contrasts of the original canvases. Today’s technology, however, allows him to reproduce these works as never before, as fine art silkscreens. “The Cajun Bride of Oak Alley” is one of only five early paintings reproduced in this way. The others are The Aioli Dinner, Jolie Blonde, Kiss Me, I’m Cajun, and Doctor on the Bayou. For further information on the history of these works, visit their links above, especially The Aioli Dinner, which also details the new printing process. For information on the prints and their availability contact the Rodrigue Gallery

Finally, if you’ve been waiting to see Tabitha Soren’s photographs from our recent session, they are now posted in the essay “Nature Girl (The Art of Modeling)”